Four Catholic churches in Fort Wayne opened their doors to the community during the sixth annual City of Churches Tour on Friday, Dec. 2.

The Cathedral of the Immaculate Conception, as well as St. John the Baptist, St. Peter, and St. Patrick parishes were among several churches that participated in this interdenominational night of local exploration.

Tour guides at the cathedral enlightened the public about the church’s history and even led them to the crypt located beneath the building. Nearly every bishop from local diocesan history is interred in the crypt, as is the builder of the cathedral, Father Julian Benoit. 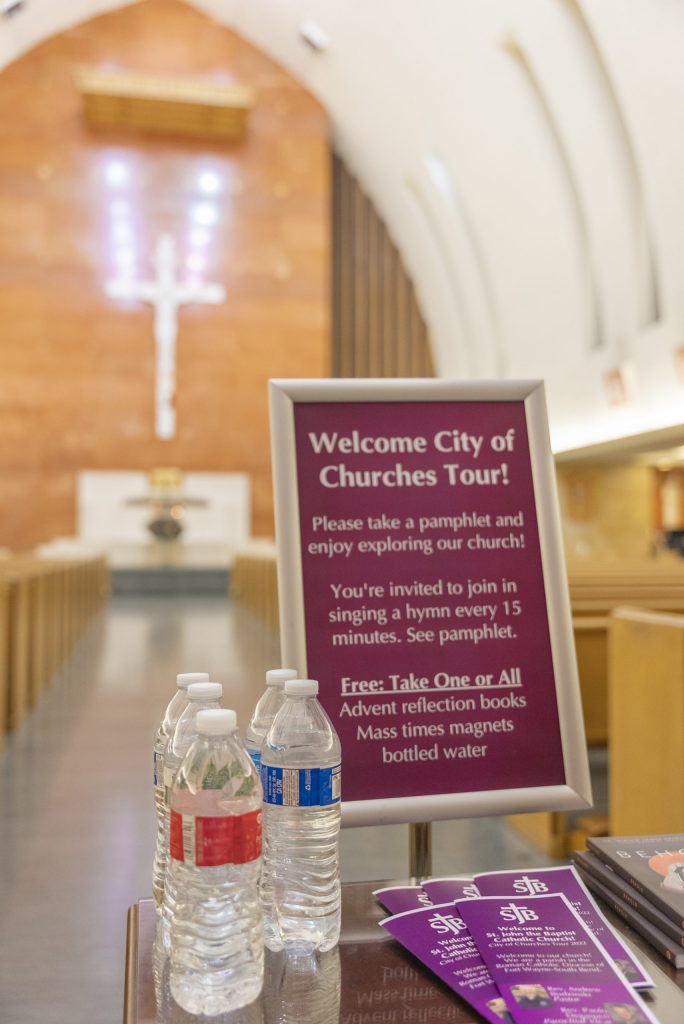 Joshua Schipper
Brochures and a sign of welcome at St. John the Baptist Parish greet participants of the sixth annual City of Churches Tour in Fort Wayne on Friday, Dec. 2. Four Catholic churches were featured in this year’s tour.

Engraved in the altar of the crypt are five crosses, each symbolic of a wound that Christ received during his crucifixion. This altar, like many found in local parishes, contains a first-class relic – part of a saint’s body. However, the particular saint whose relic resides in this altar is uncertain.

The cathedral’s stained-glass windows recall the life of the Blessed Mother, for whom the cathedral is named. At the bottom of the stained glass are names of people who contributed funds for the windows. Among them are many of Fort Wayne’s well-known from the late-19th and early-20th Centuries. Charles L. Centlivre, founder of the Centlivre Brewery, is remembered in one window, as is William J. Hosey, a former mayor of Fort Wayne. 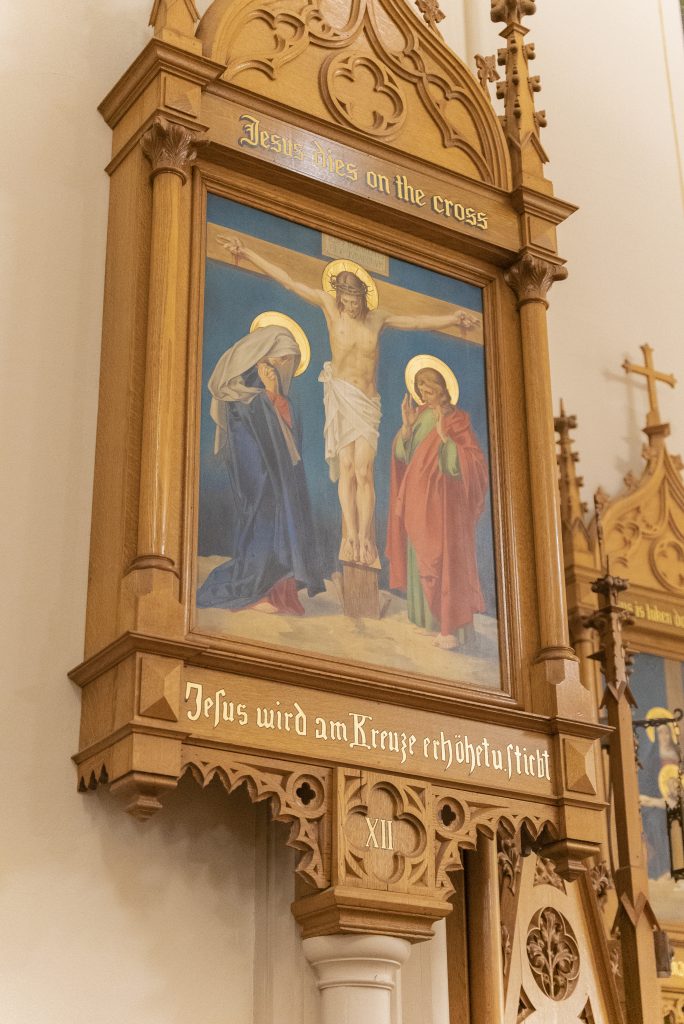 Founded as a German and French parish, St. Peter retains some of that heritage still today. The stations of the cross that adorn the sides of the building’s interior, although translated into English, still display the original German text. The current church building was dedicated in 1894, and the total cost from construction and furnishing totaled $75,000. 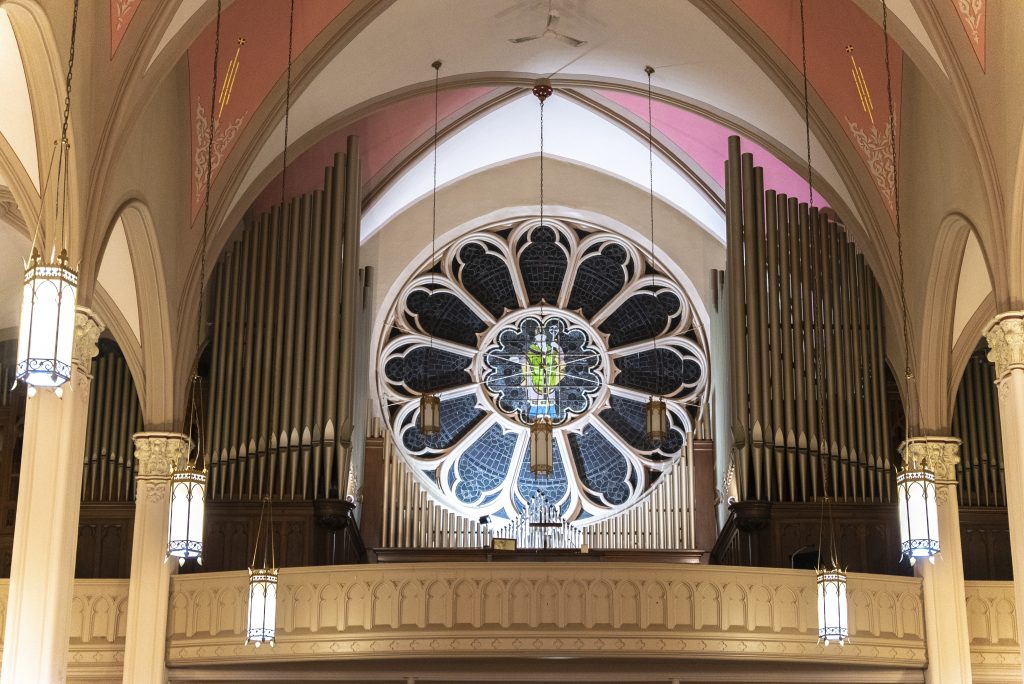 St. Patrick Parish has a similar history to St. Peter. Irish residents of Fort Wayne, many of whom arrived in the area seeking employment constructing the Wabash-Erie Canal, founded St. Patrick. The first month of planning the church building came with unforeseen roadblocks. Bishop Joseph G. Dwenger appointed Father Thomas O’Leary as the first pastor in October of 1889. Father O’Leary immediately set out to begin construction, facilitating the land sale that same month. However, by Oct. 24, he died of acute appendicitis. Despite this, ground was broken during the following spring, and Bishop Dwenger blessed the cornerstone in May of 1890.

A feature of St. Patrick that makes the structure particularly unique within diocesan Catholic churches is the sloped floor that descends toward the altar. Although today the demographics of St. Patrick Parish have changed, reminders of their founders’ heritage remain. The stained-glass window at the church entrance provides the most prominent example of this heritage, depicting Irish patron saint, St. Patrick. 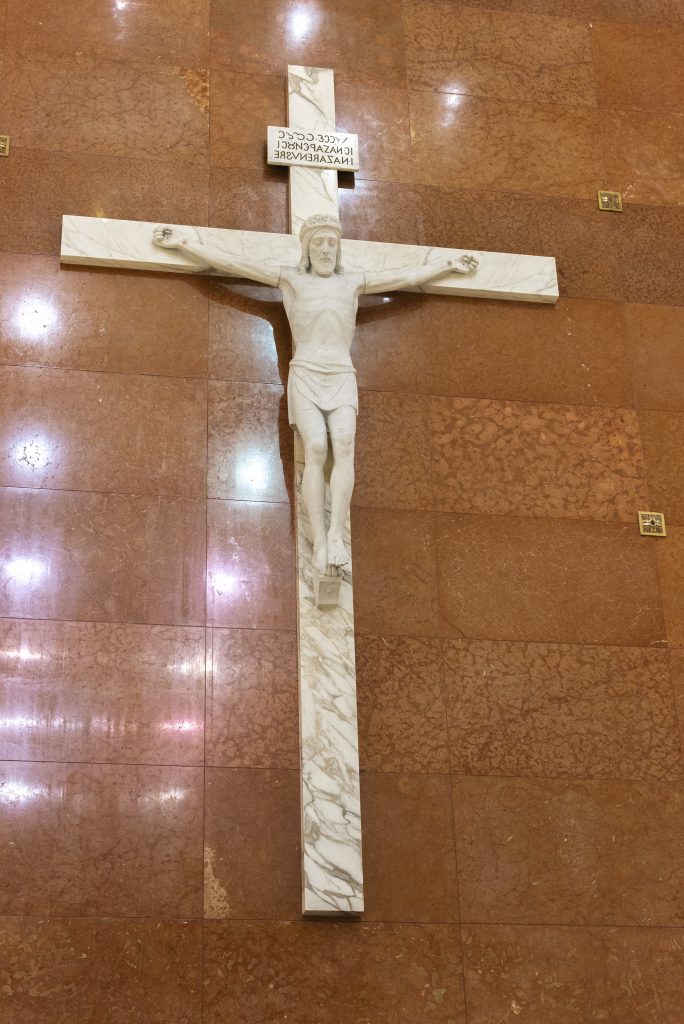 St. John the Baptist Parish recently renovated their church building which had been constructed in the 1950s. At the forefront of all the grand marble features in the sanctuary hangs a crucifix which was sculpted from Pietrasanta marble by an Italian artist.

The church tour is an annual opportunity for everyone in Fort Wayne to learn more about those who worship differently. As Saint Pope John Paul II said, “The entire life of Christians is marked by a concern for ecumenism; and they are called to let themselves be shaped, as it were, by that concern.”