CLEVELAND (CNS) — When public Masses and the celebration of the sacraments resume in dioceses where they were suspended, the look and feel of worship are not expected to be that which parishioners have been accustomed.

Social distancing in pews, requirements that Massgoers wear facial protection and even Masses without distribution of holy Communion or having distribution moved to the end of a liturgy or to another time are all possibilities depending on local circumstances and the prudential judgment of bishops.

Bishops are faced with having to balance public safety while maintaining the respect and reverence of the Eucharist and the liturgical and sacramental symbolism of Mass rites.

Don’t expect a one-size-fits-all standard, advised the executive director of the Secretariat of Divine Worship at the U.S. Conference of Catholic Bishops.

“Circumstances are different in different places. Different places are in different stages in the evolution of the crisis. And you have practical differences in what’s happening in urban areas than that in rural areas. So it’s really hard to make guidelines for everyone,” Father Menke said.

“Different bishops may have different thoughts on how best to serve their people in these odd circumstances,” he added. 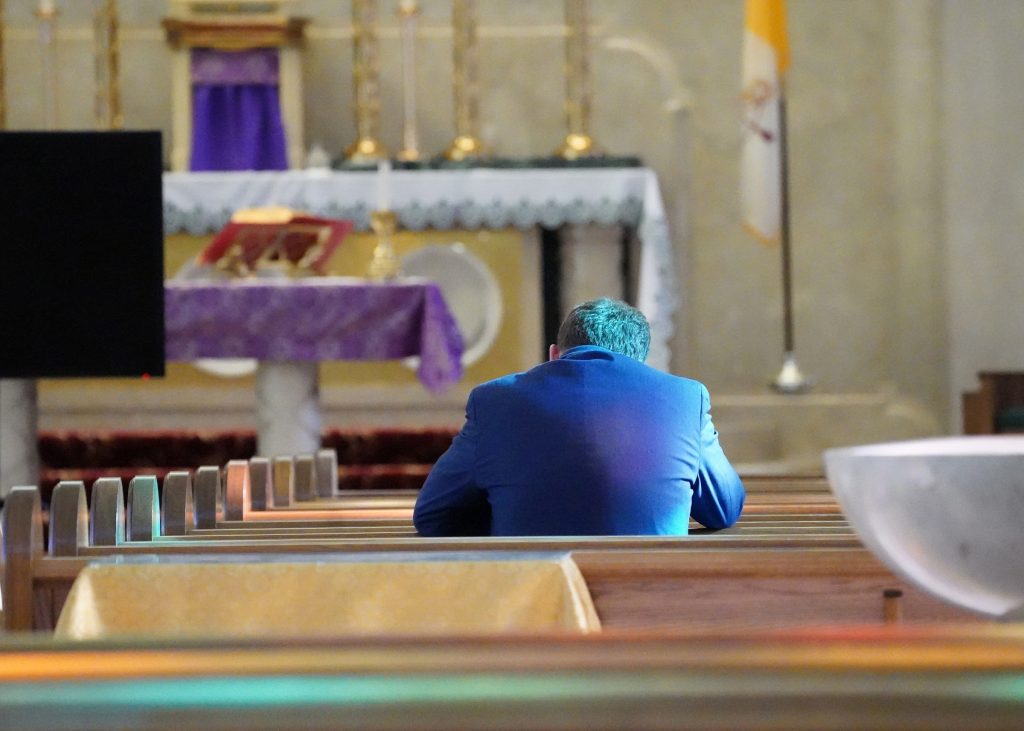 Individual bishops and state Catholic conferences have begun considering how they will proceed as state governors begin to ease stay-at-home orders, allow businesses to reopen and lift restrictions on public gatherings.

A few dioceses never suspended public liturgies, with the local bishop determining that the risk of spread of the coronavirus that causes COVID-19 was minimal.

Entering into the mix is extensive guidance developed by the Thomistic Institute at the Dominican House of Studies in Washington. The institute’s Working Group on Infectious Protocols for Sacraments and Pastoral Care April 28 released guidance on a wide list of practices that would maintain the integrity of liturgy and the distribution of Communion.

The guidance, the 21-page document said, “aims to clarify how spiritual care, including public Masses, can be responsibly offered, especially as peak restrictions on public activities are beginning to be relaxed in phases.”

It follows a White House plan issued in mid-April calling for the gradual reopening of U.S. society in three phases. A newer draft guidance offers more specific recommendations on how the country, including places of worship, increasingly can best reopen.

The working group document detailed the steps that parishes and dioceses can take through the various phases. It offered recommendations on the scheduling of Masses, the distribution of holy Communion and the role of priests at Mass.

The working group includes a mix of clergy and physicians who worked in consultation with others who have expertise in liturgical norms, theology and medical practices.

Representatives of the working group were unavailable for comment.

One specific provision in the guidance, whether under strict or eased limits on public gatherings, advised that the priest celebrant and other ministers should not wear masks or gloves during the celebration of Mass.

Under more strict limits, the guidance suggests that all ministers stay at least six feet away from each other and prayer books could be placed on a stand so that Mass servers would not have to violate social-distancing standards.

As gathering restrictions ease, the guidance suggests that Masses could be scheduled more frequently, with attendance on a first-come, first-served basis or on a rotating basis among parishioners. It supported drive-in Masses, which have become an increasingly wider option for parishes and missions, with worshippers remaining in their vehicle.

Pews can be roped off to allow for proper physical distancing, the task force said.

The guidance also offered options for the distribution of holy Communion under tight restrictions:

— Mass can be celebrated with only the priest and deacon, if present, receiving the Eucharist, with no distribution to the limited number of people in attendance. “Obviously, it is far preferable that the faithful would receive Communion, but at least in this case they would be able to attend Mass in person.

— Mass followed by Communion distribution with precautions. The task force said this option is preferred because it “respects the symbolic and liturgical integrity of Mass,” avoids practices in Mass that could lead to liturgical abuse, gives greater freedom to worshippers to receive Communion or not, and provides additional precautions to reduce risk.

Widespread use of hand sanitizer is recommended in the guidance before and even during distribution should a priest come in contact with a person receiving Communion.

— A “reasonable option” is Communion distribution during Mass as normal as long as special care is taken to maintain social distancing otherwise throughout the liturgy. The guidance said the minimal interaction among priest and communicant poses little risk based on federal health guidelines.

The guidance urged that Communion in the cup should not be offered at all even when limits on gatherings are lifted. Only people with a severe reaction to gluten should be allowed to receive Communion from the cup, the guidance said.

It stressed that anyone receiving Communion should do so without a mask in place and without protective gloves, and Communion cannot be distributed by anyone wearing gloves.

As limits on public gatherings ease, the guidance said, more restrictive practices for receiving holy Communion could also be eased as long as special precautions remain in place to limit contact between individuals.

The guidance said that Communion on the tongue could be allowed even under highly restrictive gathering limits. It called for appropriate precautions to be followed so that “it is possible to distribute on the tongue without unreasonable risk.”

Archbishops and bishops in several dioceses have temporarily suspended the reception of Communion on the tongue.

“No one should be in a Catholic church without wearing one of these,” said Jerry Galipeau, executive director for mission integration for the health system, while pointing to the surgical mask he was wearing. “That’s going to go on for a year.”

He and Dr. David Shapiro, a surgeon serving at the system’s St. Francis Hospital and Medical Center in Hartford, acknowledged planning for a return of church ministries will be difficult in the weeks and months ahead, given that social distancing will be key to keeping the coronavirus at bay.

“We have to start thinking like Costco in our churches,” Galipeau told webinar participants. That means church ushers may have to tell the faithful to maintain social distancing whether they are entering a church for Mass or in line to receive holy Communion.

Galipeau also suggested that hymnals, missalettes and “anything that people could have touched” be sanitized between liturgies. “This could be a new ministry of service. … Maybe the youth group could do this.”

Such practices demonstrate that during the pandemic, pastors and lay pastoral ministers must rethink how to safely minister, they said. For example, during a baptism ceremony for multiple infants, Shapiro and Galipeau advised not allowing water to be shared. “What does that say about the Church’s call to unity?” Galipeau asked.

Further, Galipeau discouraged full immersion baptism for adults unless the water in the baptismal pool is changed and disinfected after each immersion — which would be impractical.

For the dispensing of chrism oil at baptism and confirmation, they suggested the use of cotton balls, with a separate one for each participant.

Shapiro, who is Jewish, questioned whether it was worthwhile to have live music at any service because the cloud of water droplets emitted during singing extends farther than when people are in conversation with each other. He called for choir members to remain at their individual homes with the music they are performing coinciding with the various rites of Mass.

Galipeau, disagreed, advocating for live music to be included at Mass with appropriate precautions in place.

The difference in thinking shows that the road ahead is long, the pair said. “We have to rethink every step,” Shapiro said.

“We do know that we want to get back to worship with our community,” Galipeau said. “But if you can’t do that safely and you’re not willing to take this seriously, then just stay closed. I’m sorry to be so blunt.”