Bishop Kevin C. Rhoades celebrated the Rite of Election Feb. 21 at the Cathedral of the Immaculate Conception in Fort Wayne and Feb. 28 at St. Matthew Cathedral in South Bend. This rite generally takes place on the first Sunday of Lent, and therefore is celebrated on two consecutive Sundays in the Diocese of Fort Wayne-South Bend.

The Rite of Election is the final step that catechumens — those who have not been baptized into any Christian faith — take toward joining the Catholic Church. Typically, this rite takes place in conjunction with the Call to Continuing Conversion, in which candidates — those who are already baptized —reaffirm their commitment to coming into full communion with the Church through reception of the sacraments of Communion and confirmation. This year, for social distancing purposes, only the Rite of Election was celebrated, as the Call to Continuing Conversion is not an essential rite.

During his remarks, Bishop Kevin C. Rhoades expressed joy at receiving the new members into the Church during the upcoming Easter Vigil. He elaborated on God’s fatherly love for His children and the unique way that Christians relate to God as a Father.

“In the early Church, the Lord’s Prayer was not revealed to catechumens until immediately before their baptism. This was because they would not presume to say the Our Father until they received adoption as God’s sons and daughters. Divine sonship is not part of our human nature. We need to be reborn to heavenly life through the power of Christ the Son in order to have that dignity of sonship.” 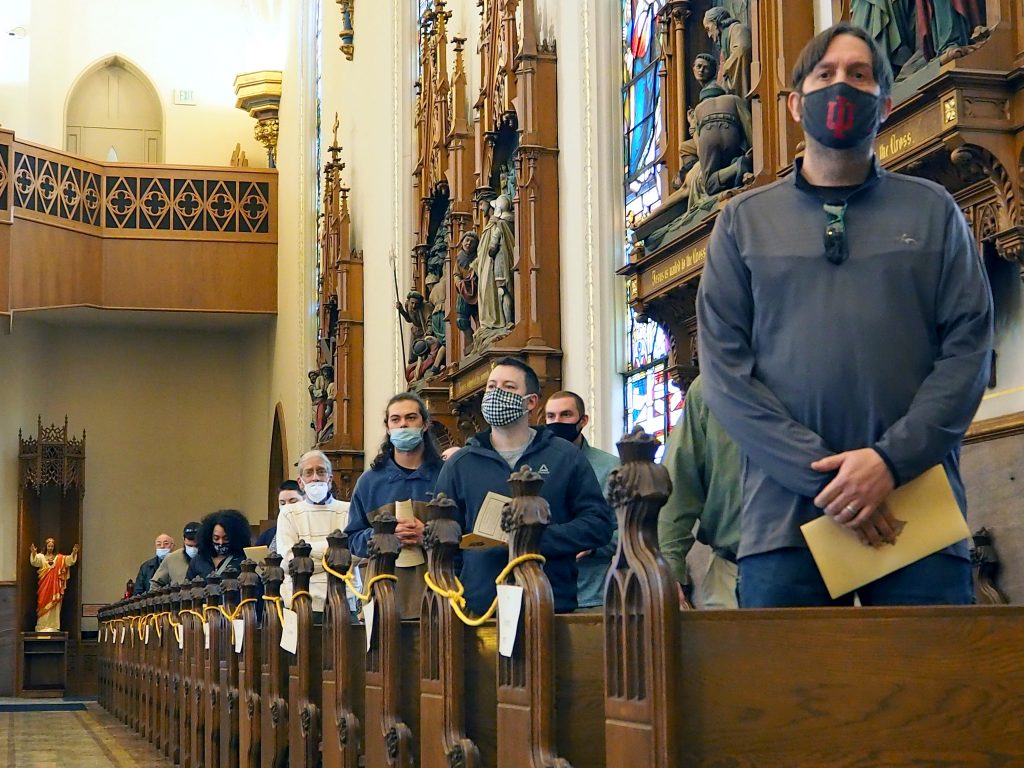 Jennifer Barton
At the Cathedral of the Immaculate Conception in Fort Wayne, those seeking baptism in the Catholic faith stand Feb. 21 to declare their readiness to join the Church at Easter Vigil.

Bishop Rhoades said he has “always been very interested” in understanding how non-Christians view God. He has spoken to Jewish rabbis and Muslim imams about the subject. Neither faith tradition professed to connect with God “in the sense of deep personal intimacy” in the manner that Christians do.

“I mention this because we often don’t realize how remarkable it was that Jesus taught the disciples to address God so intimately and affectionately as Abba – Dad.

“So catechumens, how wonderful it will be when you pray the Our Father and address God as ‘Our Father’ after you are baptized, after you become His adopted children!” 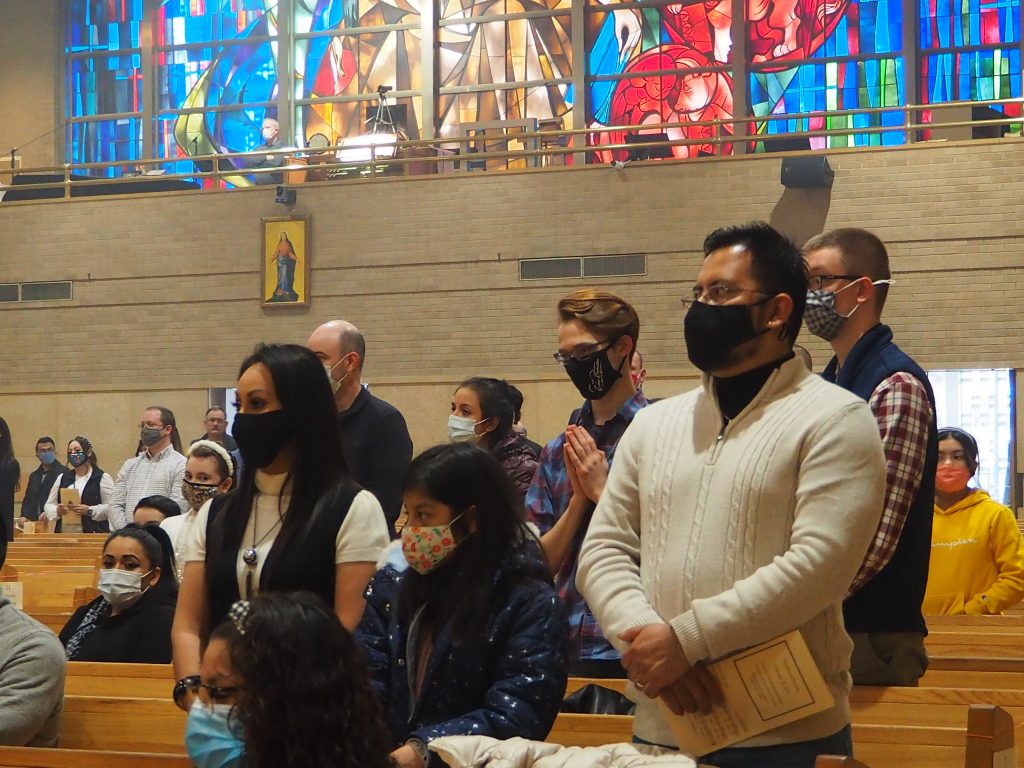 Catechumen Alison Juarez, center, stands with other members of St. John the Evangelist Parish, Goshen, when her name is called during the Rite of Election at the Cathedral of the Immaculate Conception in Fort Wayne Feb. 21. She is flanked by her godparents, Jazmin Garcia and Emmanuel Reyes.

The Gospel passage told the story of Jesus teaching His disciples to pray the Our Father, and Bishop Rhoades expounded on the many aspects of the well-known prayer and what it means to a full member of the Catholic Church to pray it, particularly in relation to the sacraments.

“Catechumens, baptism will be a new beginning in your life, calling God Father in a new way. Throughout the rest of your life, the Christian life, you will grow in this relationship with God our Father through Jesus, the Son, who at baptism becomes your brother. You will grow through your incorporation into His Body, the Church, the community of faith, hope, and love; the community instituted by Christ, the seed and beginning of His Kingdom.” 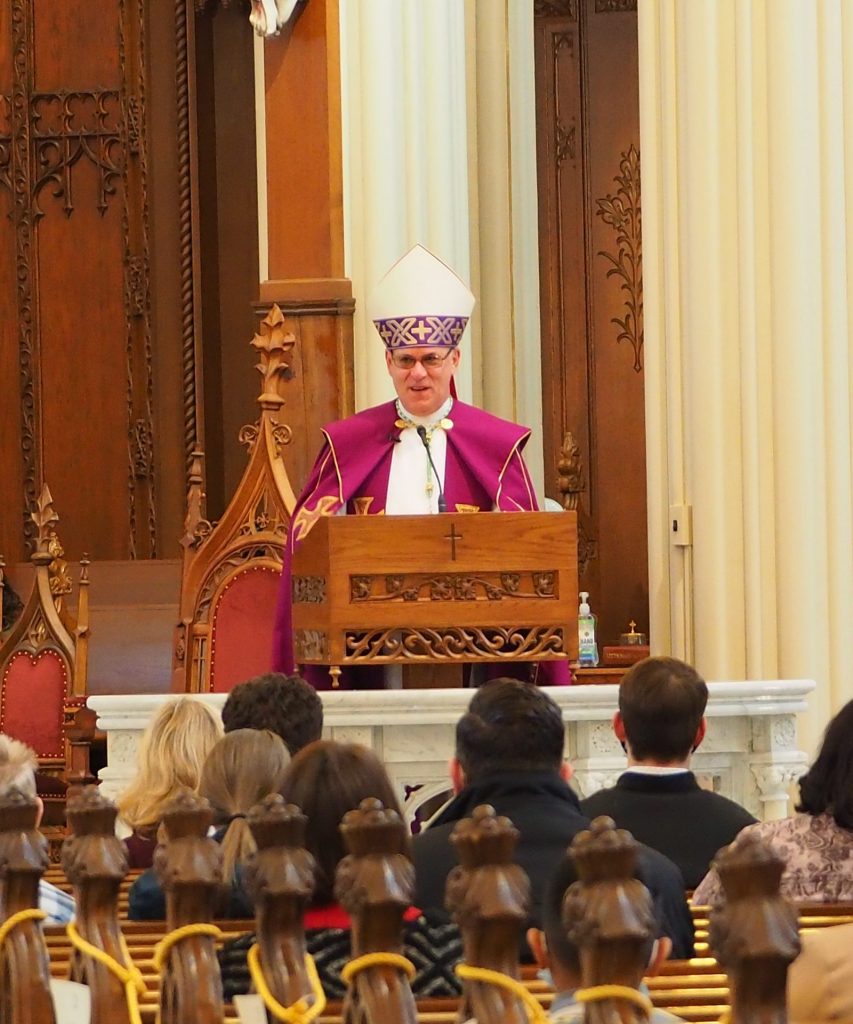 During his homily Bishop Rhoades spoke of the love of God as Father to His children, welcoming the elect into the family of God.

He concluded by expressing his hope that the elect would also “be close to the woman who was ‘full of grace,’ our Immaculate Mother Mary.”

Deacon Jim Tighe assisted the bishop during the Fort Wayne rite, presenting each parish’s Book of the Elect for the bishop’s signature. In South Bend, Deacon Frederick Everett filled this role. Now known as the elect, those seeking baptism can joyfully anticipate their entrance into the Catholic Church throughout the final few weeks of their preparation. 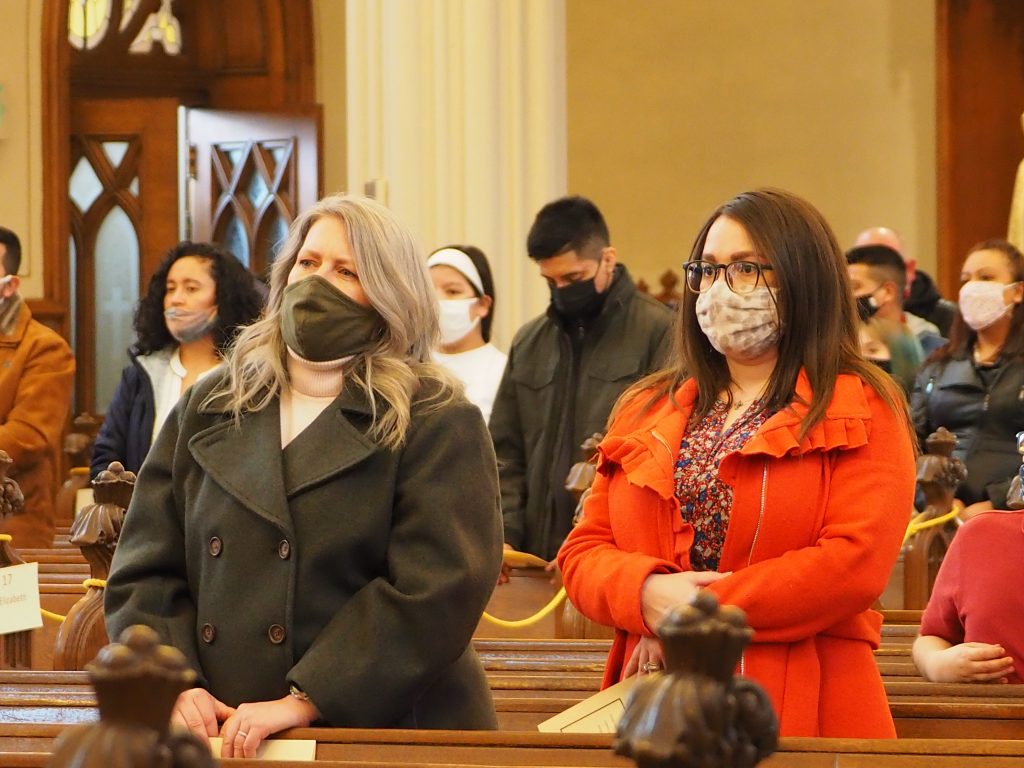 Mimi Dietrick, above left, affirms goddaughter Kayla Wilhelm as she prepares to enter the Catholic Church at St. John the Baptist Parish in Fort Wayne at the Easter Vigil.

Kayla Wilhelm, who will be joining the Church at St. John the Baptist Parish in Fort Wayne, attended the Rite of Election with her godmother, Mimi Dietrick. She expressed her eagerness to become Catholic at Eastertime.

Wilhelm came to experience the fullness of the Catholic faith while doing observational training for her teaching degree at St. John the Baptist School. She stated that she enjoyed the atmosphere at the school and experiencing the faith life of those around her. She chose Dietrick as her godmother, for whom she had worked as a nanny and who is “like family now.” Wilhelm remains close to Dietrick’s children, while Dietrick expressed her own love for Wilhelm’s child.

“If I have to be tied to anyone as a Catholic role model for the rest of my life, I want it to be her,” Wilhelm said.

Raymond Gichohi proudly anticipates the moment his son and daughter, Kylan and Sian Gitahi, will be baptized and receive first Communion and confirmation in the Catholic Church at Easter. Both of the children are very excited. Baptism, Gichohi stated, is “the building block” of faith and family life. He brought his family to America from Kenya five years ago to seek a better life and they are now members of St. Pius X Parish in Granger.