CHARLOTTE, N.C. (CNS) — People gathered to pray at St. Thomas Aquinas Church in Charlotte the day after a student opened fire April 30 in a classroom at the University of North Carolina-Charlotte, which killed two people and wounded four others.

“Our hearts are broken, and our security shaken,” said Father Patrick Winslow, pastor of St. Thomas Aquinas Church during the May 1 daily Mass about the shooting that took place at the campus just across the street.

The Catholic parish of 2,300 families serves the university’s student population through the Catholic campus ministry office of the Charlotte Diocese.

“In moments such as these, we feel helpless,” Father Winslow said. “I encourage you to cling to your faith and to one another. In faith, we know that our Blessed Lord, who was himself unjustly slain and whose security was often threatened, is close to us and that in the end, God will make right these wrongs.”

Trystan Andrew Terrell, 22, a University of North Carolina-Charlotte student, was arrested April 30 and charged with two counts of murder, four counts of assault with a deadly weapon and charges related to shooting a gun on a school campus.

The two North Carolina students killed in the shooting were Riley Howell, 21, of Waynesville, and Reed Parlier, 19, of Midland. Three of the four who were injured remained hospitalized in critical condition the day after the shooting.

“This is the saddest day in UNC-Charlotte’s history,” Philip Dubois, the university’s chancellor, said in an April 30 statement. “The entire UNC-Charlotte community shares the shock and grief of this senseless, devastating act.”

The day the shooting took place was the students’ last day of classes. The campus was on lockdown for 12 hours. 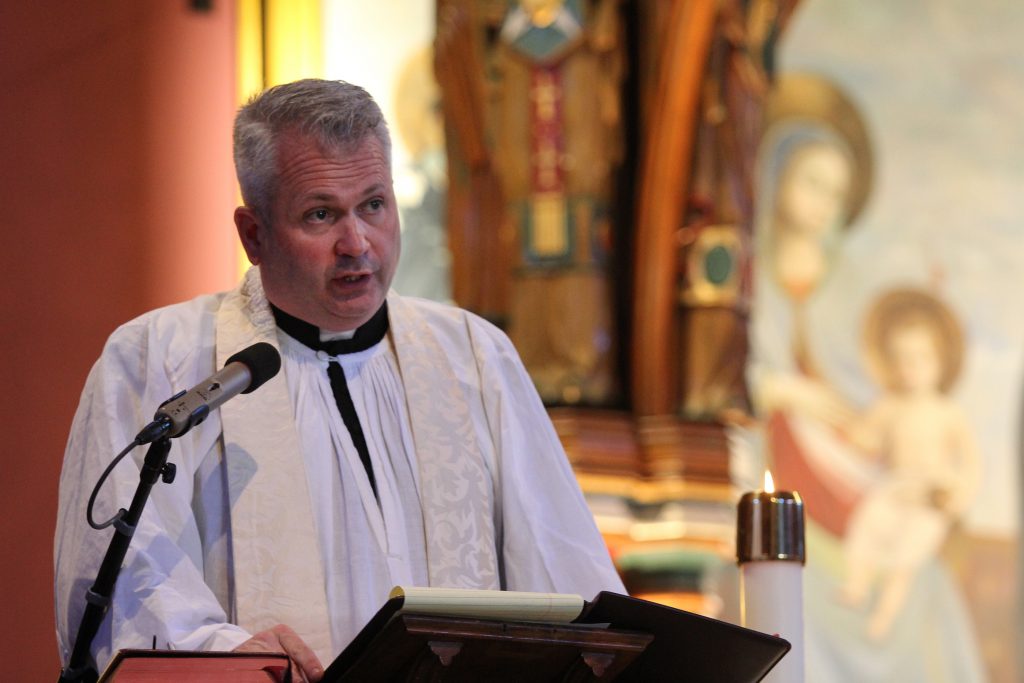 Father Patrick Winslow, pastor of St. Thomas Aquinas Church in Charlotte, N.C., leads a prayer service May 1, 2019, for the victims of an April 30 shooting on the campus of the University of North Carolina at Charlotte that killed two students and wounded four others. The church is located across the street from the campus.Many students attend Mass there and the Catholic Campus Ministry program is based there. (CNS photo/SueAnn Howell, Catholic News Herald)

The pastor of St. Thomas Aquinas also addressed the shooting at a special prayer service the afternoon of May 1, telling those in attendance how after Christ’s resurrection, his first words to the frightened apostles were: “Peace be with you.”

“This afternoon we too are huddled together with some fear and confusion, and like the apostles, we listen to hear the same words spoken to us, echoing throughout history with the force of the Spirit: ‘Peace be with you.’”

He stressed that people are praying for peace for the souls of the students who were killed, for peace and healing for the four injured students and peace for their families and friends.

“We also pray that those in our community in the University City area and national leaders find some way to prevent these occurrences into the future,” he said.

“We want to live peaceful lives,” he added.

Father Winslow said that in the face of tragedies, “we realize quickly we have nothing to console us apart from our faith and one another. Cling to both, for the Lord God is the one who can provide us peace. And each one of us can help one another feel and find consolation in this moment.”

Father Innocent Amasiorah, the campus minister at University of North Carolina-Charlotte, had already left the campus when the shooting began and only learned about what was happening when he started seeing messages from the students telling him: “I’m OK.”

He offered them messages of comfort while they were on lockdown inside campus buildings and then joined some of them in the area where they were evacuated.

“This is something that people can’t imagine,” he said. “These tragedies unfortunately do occur around us. We can comfort one another, share in each other’s pain at this time. We are strongly united in comforting each other,” he said.

Father Amasiorah planned to gather with students on campus May 1 to pray the rosary prior to the prayer service at St. Thomas Aquinas Church.

He said since April 30 was the last day of classes, the next day “should be the first day of joy. Instead, it’s a day of anxiety and fear.” He hoped gathering in prayer and allowing the students to share their feelings would help ease the tension and allow for healing.

A candlelight vigil was also held on campus the evening of May 1. St. Thomas Aquinas Church donated more than 1,700 candles for the vigil in memory of the students injured and killed in the shooting.