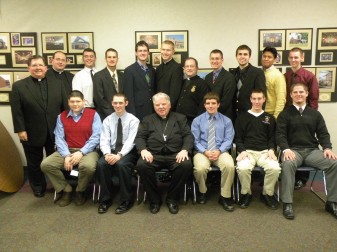 Steve Smith emceed the event and Father Tony Steinacker, co-chaplain of the club, lead the Serra prayer for vocations. Father Bernard Galic introduced the seminarians, who then introduced their parents, family members and pastor.

Bishop John M. D’Arcy spoke on vocations and reported a possibility of 10 new candidates within the next year. The Andrew Dinner, a dinner that introduces young men to the religious life, was held in both Fort Wayne and South Bend. Sixty people were in attendance in Fort Wayne and 40 from South Bend.

Following Bishop D’Arcy’s talk, Bishop Kevin C. Rhoades, bishop-designate for the diocese, spoke on his past involvement with seminarians and the Serra Club in the Diocese of Harrisburg. Gifts were presented to each of the seminarians with a closing prayer by Father Jason Freiburger, co-chaplain of the club.