Early Fort Wayne industrialist John H. Bass and his wife, Laura, cared about their employees at the Bass Foundry and Machine Works and other businesses.

“He took intimate care of his employees — provided meals,” said Kimberly Brinneman of the University of Saint Francis. “He took them in as family.” 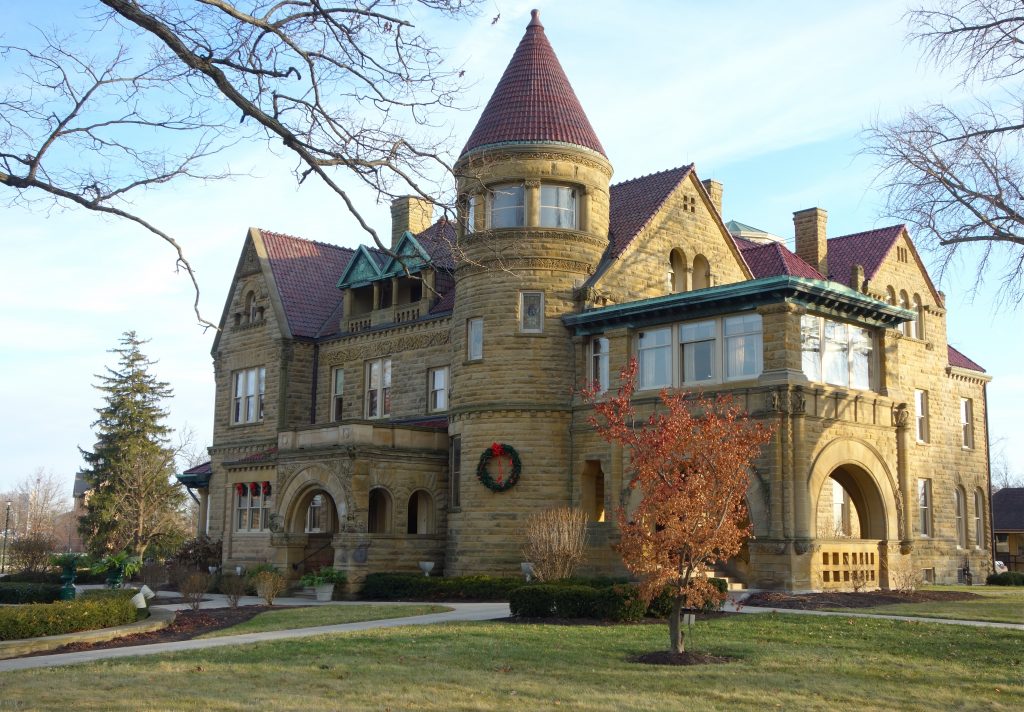 Photos by Kevin Kilbane
The University of Saint Francis’ Christmas in the Castle event welcomes people each Advent to enjoy holiday decorations inside and out at the Brookside mansion on the university’s Spring Street campus in Fort Wayne.

During the season of Advent, when Mary and Joseph found no room at the inn and Jesus Christ was born in a stable, the university continues the Bass family’s tradition of hospitality with an annual Christmas in the Castle event.

Every year during the event, the public can tour the Bass family’s former Brookside mansion — now part of the USF campus — to gaze upon the Christmas decorations brightening nearly every room of the three-story, castlelike home.

“We just want to share the beauty with people,” said Brinneman, the university’s Christmas at USF coordinator. “It is a wonderful, wonderful place.”

“That’s really why at Saint Francis, it (Christmas) is a big deal,” said Sister Elise.

Completed in 1903, the 24,000-square-foot Brookside at 2701 Spring St. replaced a previous home on the site that burned down in 1902, according to Brinneman. Both houses initially served as a summer home for the Bass family, which had another house in downtown Fort Wayne.

One example of the care with which the Basses treated employees was a Christmas reception held in 1890 at the original summer home, said Brinneman. The crowd of 500 people included many Bass employees.

John Bass died in 1922 and Laura in 1935. The Basses’ daughter sold Brookside and surrounding land in 1944 to the Sisters of St. Francis of Perpetual Adoration, the founders of what is now the University of Saint Francis.

The mansion initially served as the college after the sisters relocated to Fort Wayne from Lafayette, where they founded the school in 1890. Brookside continued to house the USF library until 2006. After extensive restoration and renovation was completed in 2010, the house became home to the university’s administrative offices.

The mansion features some of the best craftsmanship of its era, with a sculpted sandstone exterior, inlaid wood floors, and ornate staircases, fireplace mantels and wood trim. Christmas decorations just enhance the beauty.

One of the Sisters of St. Francis had done limited Christmas decorating at Brookside before the renovations and that became an early form of Christmas in the Castle. USF began the current event in 2011, said Brinneman. 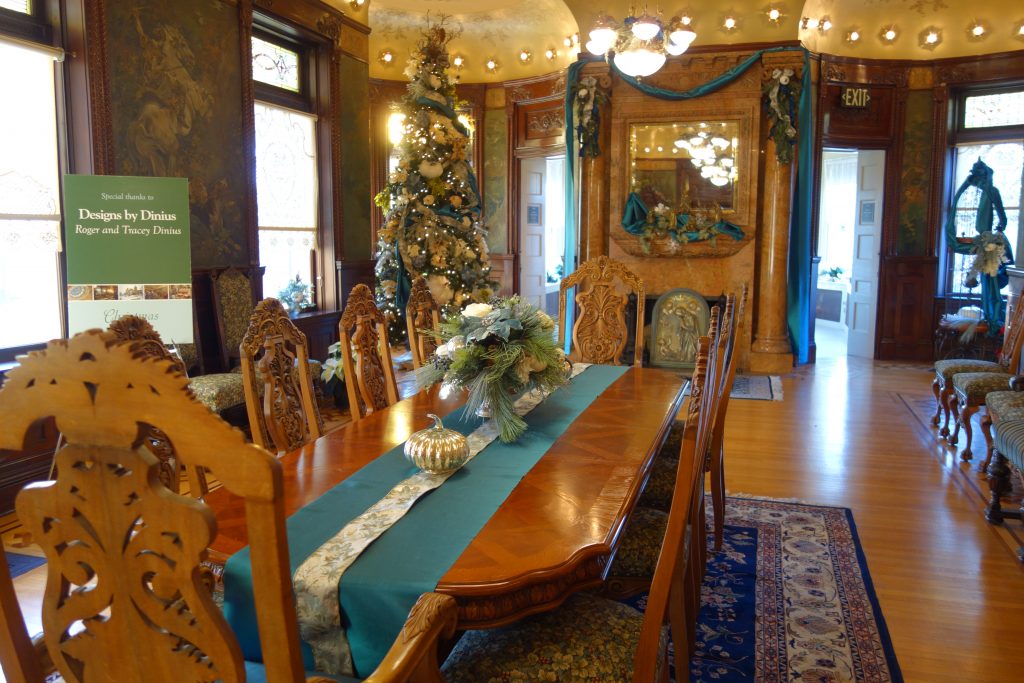 Nearly every room of Brookside mansion was adorned in holiday trim for the Christmas in the Castle event Dec. 6-10.

This year, 23 elaborately adorned Christmas trees graced the rooms of Brookside. At least 82 Nativity scenes of all sizes and designs shared the Christmas story on trees, mantels, bookcases, windowsills and tables throughout the house. They included a detailed Hummel set donated to the university and first displayed last year.

Along with USF staff, volunteer decorators included local florists and designers as well representatives from Bishop Luers and Bishop Dwenger high schools. Bishop Dwenger, participating for the second year, decorated the third-floor billiard room largely in white with a Nativity theme. Bishop Luers, which took part for the first time, filled the large, third-floor ballroom with bright red decorations and a sleighload of tree ornaments handmade by students. 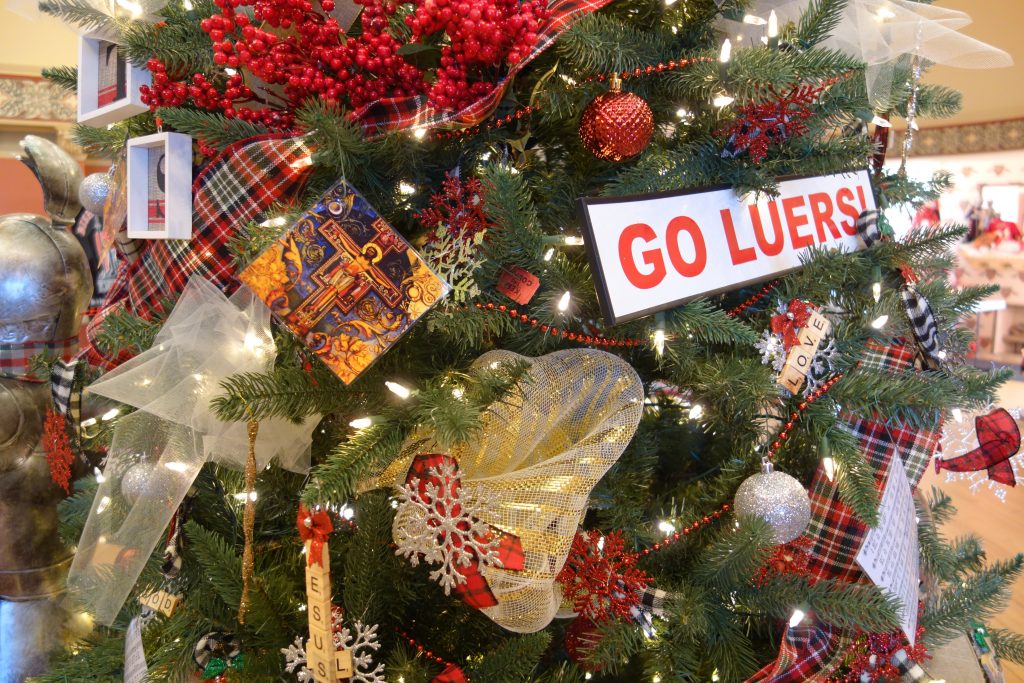 While Brookside is decorated, the university also uses it for student, alumni and donor events, said Brinneman. In addition, USF rents it out on a limited basis for holiday events held by organizations, companies and parishes.

USF depends on volunteers to help welcome the public to the house. University staff, faculty and students and people from the community filled about 185 volunteer slots during the five-day event.

Outgoing USF president loves to join in the decorating 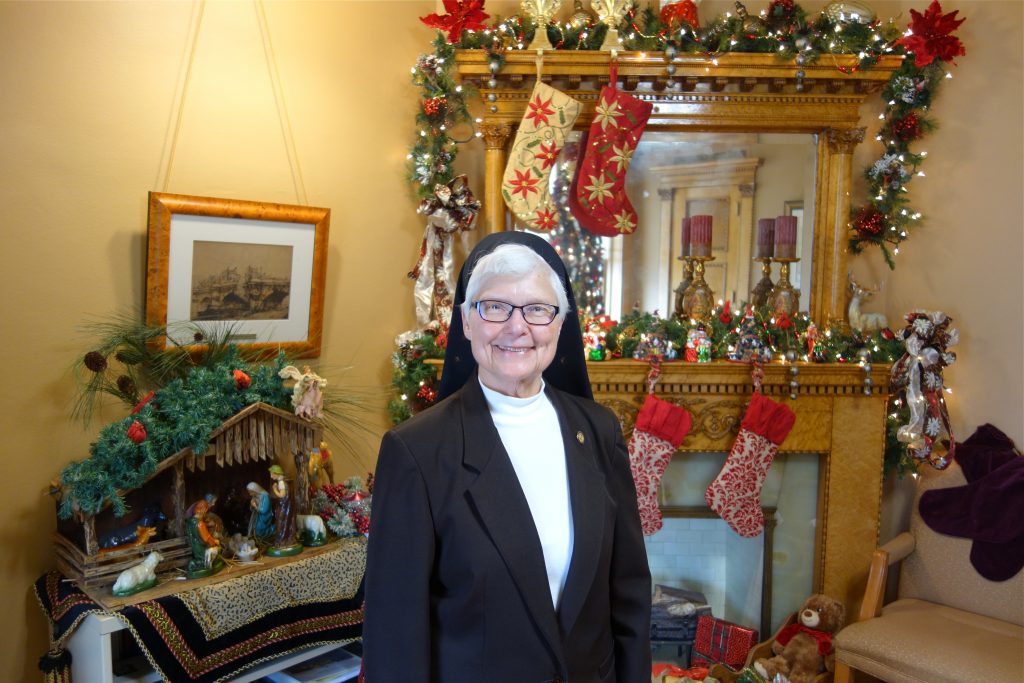 Photos by Kevin Kilbane
Sister M. Elise Kriss, president of the University of Saint Francis in Fort Wayne, stands with some of the holiday decorations she hung to prepare a colleague’s office for the Christmas in the Castle event at USF’s Brookside mansion.

The president of the University of Saint Francis in Fort Wayne remembers as a girl how her family always had a Christmas tree and stockings hung from the fireplace.

She has continued that tradition as an adult, decorating her office or other rooms for USF’s annual Christmas in the Castle event at Brookside, the 1903 mansion on its Spring Street campus that now serves as the administration building. USF staff, faculty, students and community volunteers decorate Brookside for Christmas and then the university opens it for public tours.

“I think it is a nice event for the community, and I want them to have an enjoyable experience,” Sister Elise said.

While she typically decorates her own office, this year she let her sister, Cathy Minor of Fort Wayne, transform her space. Sister Elise, who describes her love of Christmas decorating as a hobby, worked instead on the sitting room next to her office and the neighboring office of Matt Smith, vice president for institutional advancement.

The change is one of many this year for Sister Elise, who will leave her president’s job June 30, after serving 27 years in that role. 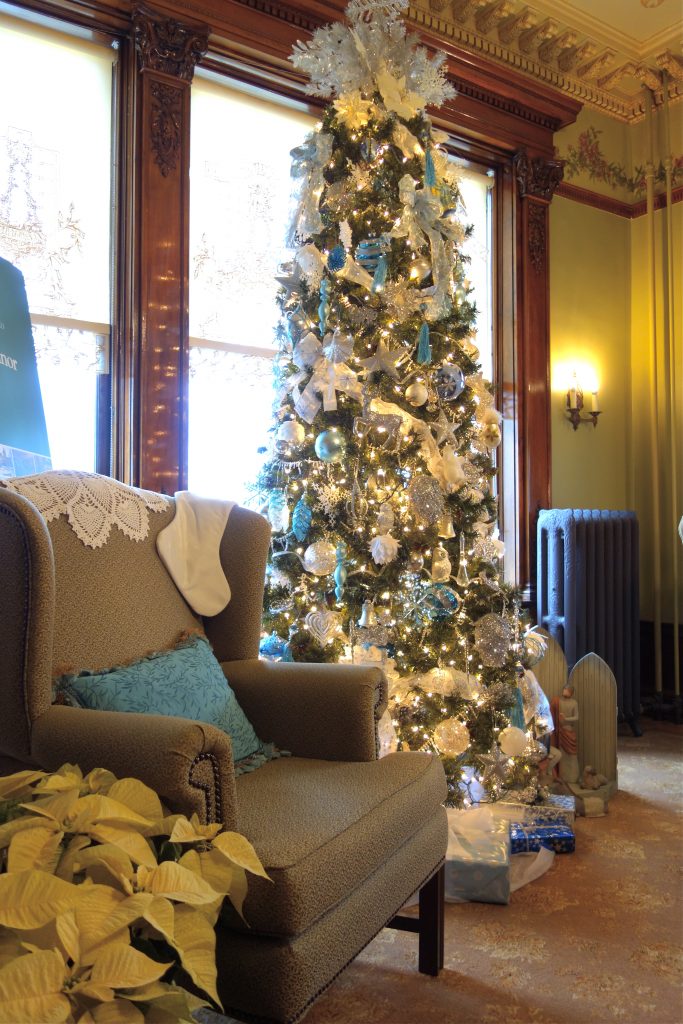 Snow, ice and crystals create the theme for the Christmas tree in the office of Sister Elise.

She plans to take a sabbatical of up to a year. “Then I will come back and hopefully find another role or find another way to be helpful,” she said of rejoining other members of the Sisters of St. Francis of Perpetual Adoration religious order serving at the campus. The Sisters of St. Francis founded the university in 1890 in Lafayette and moved it in 1944 to Fort Wayne.

Sister Elise said she and her sister “like decorating for Christmas and we like gardening.” Her sister has volunteered for several years to decorate Brookside for Christmas in the Castle, which resumed in 2011 after the renovation of Brookside.

This year, the Christmas tree, fireplace mantel and other decorations in Sister Elise’s office use hues of white, silver and blue as well as lots of glitter and sparkle to create a theme of snow, ice and crystals, she said. The display also includes a few Nativity scenes, including a large one at the base of the tree.

Sister Elise prefers vintage and Victorian-era styles, which she used in the rooms she decorated.

The sitting room features a small Christmas tree decorated with Victorian-style ornaments and candles. Vintage-looking Christmas stockings in pink and purple hang from a bookcase and display case. A cloak and children’s clothing from the Bass family, the original owners of the house, hang on a chair and coat rack.

Vintage-looking Christmas stockings hang from the room’s fireplace. Decorated artificial evergreen garland runs along the fireplace mantel and up and over the top of the mirror behind it. A large Nativity scene stands on an adjacent table. Red decorations adorn the Christmas tree near Smith’s desk.

Sister Elise said she often decides a year in advance on the visual theme for the room or rooms she will decorate for Christmas in the Castle. She’s also known for her forward thinking at USF, which has grown in enrollment, increased academic and other programs, and added a downtown campus during her leadership.

She and other Christmas in the Castle volunteers start their decorating in early November. They assemble holiday decor items from a vast collection of Christmas decorations kept in Brookside’s basement, she said. If she sees decor items on sale after Christmas that may be useful in future years, she may buy them herself.

“I like to hold onto the vintage, traditional things,” she said. “It kind of fits the theme of the house.”

She also likes to peruse the decor items that didn’t get used during the current year and ponder how she may be able to work them in the next year.

Whether Sister Elise will be present to decorate for next year’s Christmas in the Castle is uncertain. But there’s no question about her willingness.

“If I happen to be around when they are decorating for Christmas,” she said with a smile, “I will be happy to help.”