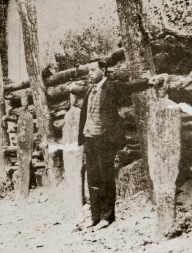 Jesuit priest and martyr Blessed Miguel Pro Juarez is pictured just before his execution by firing squad Nov. 23, 1927, in Mexico. Though he did not support the armed insurrection against the Mexican government’s anti-Catholic actions, he was arrested and executed without trial. His final words were reported as, “Viva Cristo Rey!” (“Long live Christ the King!”).

This coming Sunday, the last Sunday of the liturgical year, is the Solemnity of Our Lord Jesus Christ the King. This beautiful feast was instituted in 1925 by Pope Pius XI at a time when Fascist dictators were rising to power in Europe. It is said that the specific impetus for the Pope establishing this universal feast of the Church was the martyrdom of a Catholic priest, Blessed Miguel Pro, during the Mexican revolution.

Cardinal Gerhard Muller, the Prefect of the Vatican Congregation for the Doctrine of the Faith, explains:

As Father Pro was being taken out to be shot — his only crime being that he was a Catholic priest — in one last act of defiance he stretched out his arms in the shape of a cross and shouted “Viva Cristo Rey.” His cry rang out throughout the whole Church and the Pope declared that a feast of Christ the King should be included in the general liturgical calendar. The institution of this feast was, therefore, almost an act of defiance from the Church against all those who at that time were seeking to absolutize their own political ideologies, insisting boldly that no earthly power, no particular political system or military dictatorship is ever absolute. Rather, only God is eternal and only the Kingdom of God is an absolute value, which never fails. And this because all political or military kingdoms are ultimately based on and maintained by force or coercive power.

The Solemnity of Christ the King still has great relevance today. There are still currents of thought and action that seek to absolutize particular political ideologies, ignoring the sovereignty of God and the absolute value of His Kingdom. The Kingdom of God is not imposed by force. Jesus did not want to rule a political kingdom by force. He said clearly to Pontius Pilate: My kingship is not of this world. Jesus teaches that real power is not the ability to coerce or conquer others. The power of Christ the King is the strength to love and to serve. Jesus turns the values of the world upside down when He proclaims His Kingdom. That is the Kingdom we pray for when we recite the Our Father.

In the beautiful Preface at Mass on the Solemnity of Christ the King, the Kingdom of God is described as an eternal and universal kingdom, a kingdom of truth and life, a kingdom of holiness and grace, a kingdom of justice, love and peace. This is the Kingdom Christ brings. We became citizens of this Kingdom when we were baptized. Our primary allegiance should always be to Christ, the King of the Universe, since we are first and foremost citizens of His Kingdom.

Having said all this, it is important to keep in mind that we are also members of the earthly kingdom. We live in a civil society with duties as citizens of this society. We are called to love and serve our nation. It is our duty “to work with civil authority for building up a society in a spirit of truth, justice, solidarity, and freedom” (CCC 2255). At the same time, we are “obliged in conscience not to follow the directives of civil authorities when they are contrary to the demands of the moral order, to the fundamental rights of persons or the teachings of the Gospel” (CCC 2242).

Blessed Miguel Pro recognized the primacy of Christ the King over the unjust dictator who was suppressing the Church in early 20th century Mexico. He gave his life, like so many martyrs of the past and even now in the present, for the sake of the truth of Christ. Father Pro, as he was being shot, extended his arms, making the sign of the cross with his body. He preached Christ the King to the end, by giving his life for the sake of His truth. How many Christians in the world today are doing the same in the face of religious persecution! This is the calling we have all received: to make our lives into a sign of the cross and preach Christ the King by living in His Truth.

The Church teaches that everyone is called to enter the Kingdom of God and that this Kingdom belongs to the poor and lowly, that is, to those who have accepted it with humble hearts. Pope Francis is constantly reminding us that Jesus invites sinners to the table of the kingdom. Jesus invites sinners to that conversion without which one cannot enter the kingdom, but shows them in word and deed his Father’s boundless mercy for them and the vast joy in heaven over one sinner who repents (CCC 545). On the Solemnity of Christ the King, it is good for us to reflect on the kingdom that Jesus inaugurated, the kingdom present in the person of Jesus, the kingdom that begins in the Church and that remains in our midst in the Holy Eucharist.

The true nature of Christ’s kingship was revealed when He was raised high on the cross. The cross is His throne. May Christ the King, the King of love on Calvary, reign in our lives! This happens when we conform our wills to His. Immediately after we pray Thy kingdom come, we pray Thy will be done. These two petitions go together.

May the Holy Spirit help us to be faithful followers of Christ our King!