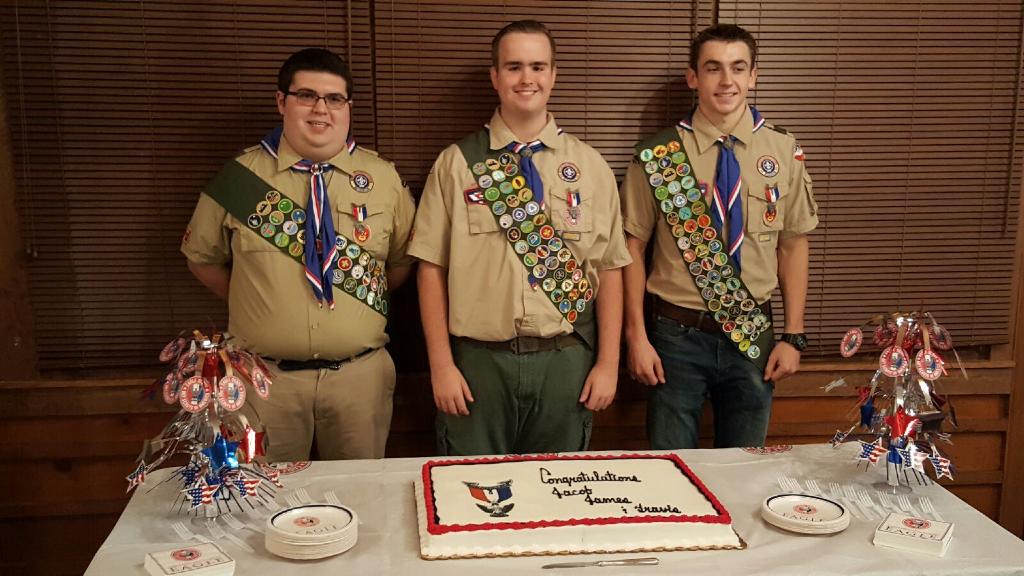 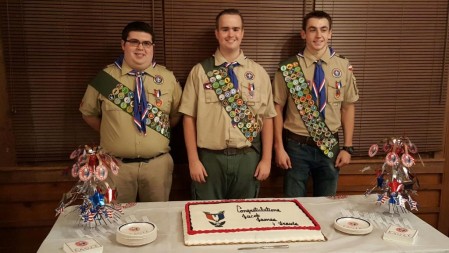 Three Christ the King School alumni recently achieved the highest rank of the Boy Scouts of America; that of Eagle Scout. Travis Kirkman, Jacob Snyder and James Elliot, from left, were recognized for their accomplishment Oct. 11 in South Bend.

Travis Kirkman, Jake Snyder and James Elliot of Troop 451 were honored at the Isaac Walton League in South Bend on Oct. 11, during their Eagle Court of Honor ceremony. All three graduated from eighth grade at Christ the King in 2013, but were able to stay close while participating in Scouts. Through this, they have also been able to further their faith.

“Once you reach the older ranks in Scouting, a large part of advancing in rank becomes service,” said Jake Snyder, a senior at St. Joseph High School. “So participating in other Scouts’ Eagle projects helped show me the benefits of serving those in need, which is part of the corporal works of mercy. Some of the projects were for religious institutions, which kept my faith nearby even when I wasn’t at Mass or in school.”

Many of Troop 451’s activities involve Catholic organizations, because Troop 451 is chartered by Christ the King parish.

The Boy Scouts organization has no specific religious affiliation, but it does hold that the “belief in a higher power” is important for the development of young men. In addition, part of the Boy Scouts oath is “to do my duty to God and my country and to obey the Scout Law.” The troop also has a chaplain’s aide who says a prayer before campout meals and at ceremonies recognizing rank advancements and earned merit badges.

To achieve the rank Eagle Scout, one of the requirements is to earn 21 merit badges. However, this is not the most difficult part of the process.

Now that the boys have become Eagle Scouts, it does not mean that their journey is over. It means the opposite. When a Scout achieves the rank of Eagle, he figuratively gets his wings.

“The wings don’t mean that I can fly a plane,” said Jake. “Instead, they mean that I live the Scout Oath and Law out even when I’m not wearing the uniform: that I have proven I am trustworthy, loyal, helpful, friendly, courteous, kind, obedient, cheerful, thrifty, brave, clean and reverent, and that I can do my best to do my duty to God and my country, obey the Scout Law, help other people at all times, keep myself physically strong, mentally awake and morally straight.”