Not many 75-year-old organizations get to honor one of their founding members, but the Christ Child Society of South Bend was able to give its prestigious Mary Virginia Merrick Award to Barbara Dillon at a luncheon on March 14. A year before her marriage, she was the youngest woman that Rosaleen “Puddy” Crowley invited to join 14 others in this new venture in August of 1947. 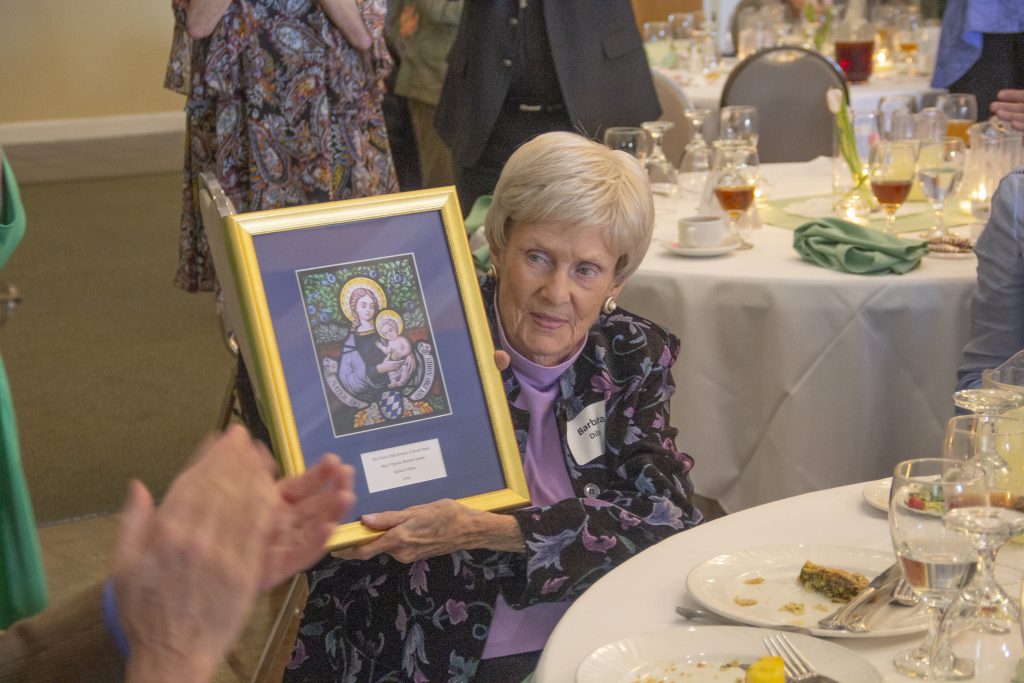 Photos by Joshua Schipper
Barbara Dillon, one of the founding members of the Christ Child Society of South Bend, is honored with the prestigious Mary Virginia Merrick Award at a luncheon on March 14 in Mishawaka.

Flanked by one of her four sons and his wife, Dillon called herself living proof that dinosaurs still roam the earth, declared that everyone in the room deserved an award and said, “I am awe-struck at all that has happened in 75 years.” Kathy Seidl, who presented the award, recalled that Barbara originally used index cards to record information about every family that the Christ Child Society helped, including the children’s ages and sizes. “She was the Intake Room,” Seidl said, a job now done by five members of the ministry, and all through the use of modern computers. Another fun memory Seidl shared was of clothing kept in tubs too heavy to carry downstairs; clothes were thrown over the banister to those waiting below.

Himself a member of the Christ Child Society, Bishop Kevin C. Rhoades professed his delight at celebrating Mass with members of the Society at St. Bavo in Mishawaka, kicking off a year-long celebration with the theme: “Honoring our past. Embracing the future.” He began his homily by quoting from the day’s Gospel from Luke: “Give and gifts will be given to you.”

The bishop continued, “Since 1947, the members of your chapter of the Christ Child Society have been serving needy children of St. Joseph County, giving of your time, talents and treasure out of love for the Child Jesus and the little children in whose faces you see the face of the Child Jesus.” He also underlined the importance of the Eucharist as the sacrament of charity. “The Holy Eucharist impels us today to hear the cry of the poor and to respond in love.” 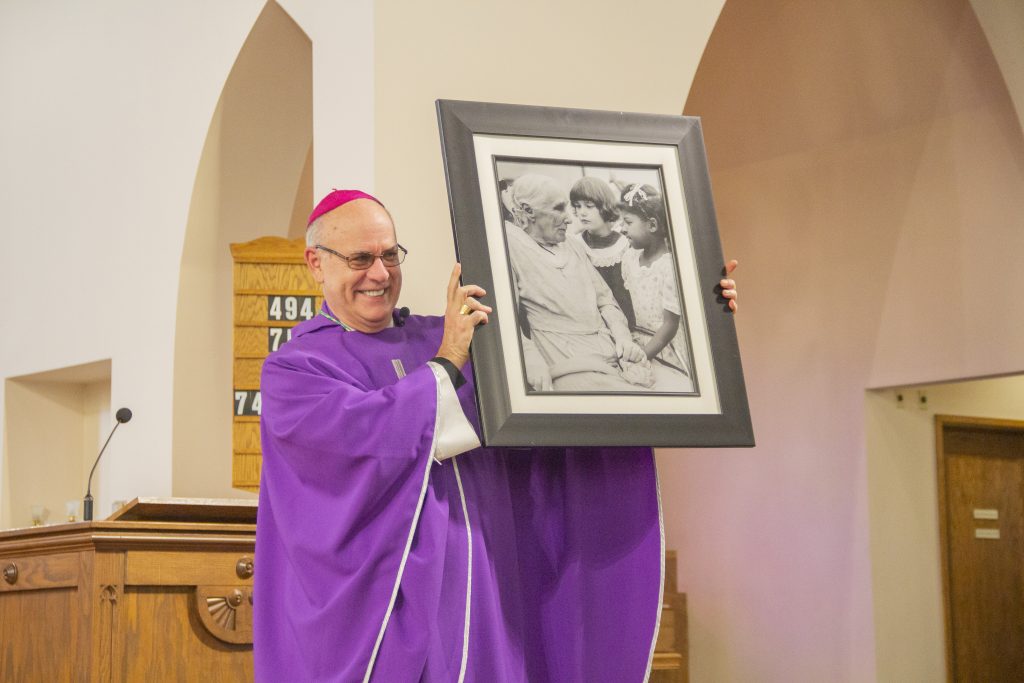 Bishop Kevin C. Rhoades celebrated Mass for members of the Christ Child Society of South Bend at St. Bavo Church in Mishawaka. To celebrate their 75th anniversary, he presented the organization with a framed picture of the national organization’s found, Servant of God Mary Virginia Merrick.

At the luncheon following Mass, a short film was shown about Servant of God Mary Virginia Merrick, who founded the Christ Child Society in 1887 in Washington, D.C. Although a fall that she took as a teenager left her paralyzed, she developed a rich spiritual life and found creative ways to serve needy children at a time when there were few social services. She prioritized spending time among poor children, not just giving them things. Since the postulator for Merrick’s canonization cause is a friend of Bishop Rhoades, he was able to gift the local Society with a framed photo of Mary Virginia Merrick with two little girls.

The Christ Child Society has always worked to “widen and deepen its activities to meet the exigencies of its time,” in Mary Virginia Merrick’s words. One of their earliest projects was providing layettes of handmade blankets and clothing for newborns, including angel layettes for infants who have passed away. Brand-new and high-quality used clothing for older children, especially winter coats, soon followed, then books became a staple giveaway for the Society. School uniforms and first Communion outfits were another specific need. 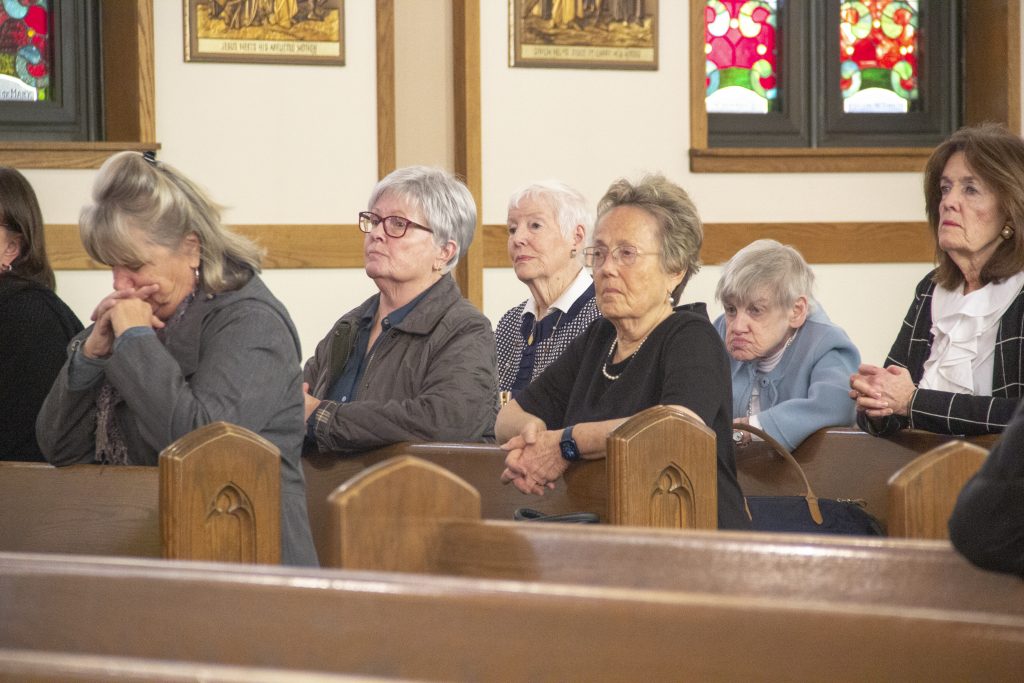 Members of the Christ Child Society of South Bend pray at Mass at St. Bavo in Mishawaka.

Through the years, the Christ Child Society of South Bend has filled this need, beginning with the trademark layettes, with their first recipient born on Christmas Day in 1947. They also provided Christmas dinners to families in need, supplied beds and crib mattresses to meet local needs and engaged in educational programs.

More recently, Society members have been involved in tutoring at St. Adalbert School, even when they had to read online due to COVID-19. The Society even financed a field trip to the symphony for St. Adalbert students.

Members have also made a special effort to clothe refugee families and provide large duffel bags full of supplies that children in foster care and homeless centers can call their very own. 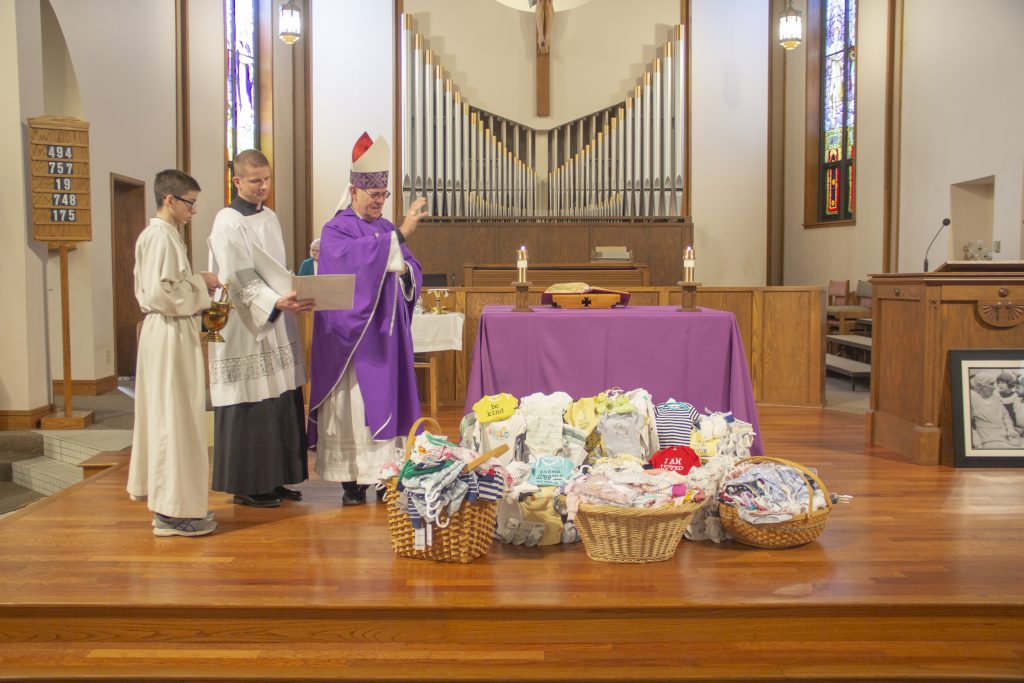 Bishop Rhoades blesses baskets full of baby clothing that the Christ Child Society will give away to needy families as part of their layette program.

The anniversary year for the Christ Child Society of South Bend will include fundraisers like the annual appeal in May and the November Let Love Shine gala, as well as fun social events like the May Derby (hat) Day, where past presidents showcase fashions from every decade of the Society’s existence. Around Mother’s Day, there will be a diaper drop with the goal of collecting 60,000 diapers. On August 4, the new Clothing Center on Miracle Lane in Mishawaka will host an anniversary open house.

Besides welcoming clients, volunteers shop for needed items and solicit donations within the local community. “We can pinch a penny until it screams,” claimed Betsie Pendarvis, Vice President of Clothing. She was especially thrilled when Puddy Crowley’s daughter in Philadelphia – one of the founder’s ten children – offered to do some of the online shopping for them. Other volunteers sort, label and organize items. Students looking for service hours have been very helpful in this area.

Recent retirees often enjoy working at the Christ Child Center. Besides camaraderie with other volunteers, member Patty Barrett says, “Baby clothing today is so adorable!” St. Bavo collected baskets of such treasures that were carried forward at the offertory during the Mass and blessed by the bishop.

Despite the pandemic, 25 new members joined during the past year, bringing the total membership of the South Bend chapter to 380. Despite the large number, they are a close-knit group, supporting each other through sickness and times of grief as well as working side by side. It is not unusual for several generations of women in the same family to be involved in the organization together.

Co-President Monique Deguara from Holy Cross Church said, “The best way to handle change is to stay flexible. The Christ Child Society of South Bend is a very flexible organization while staying focused on its mission of supporting the children of St. Joseph County for the past 75 years.”  Co-President Patti Banet, and President-Elect Sue Seall helped Deguara read the names of deceased members, spouses and parents before Mass began. 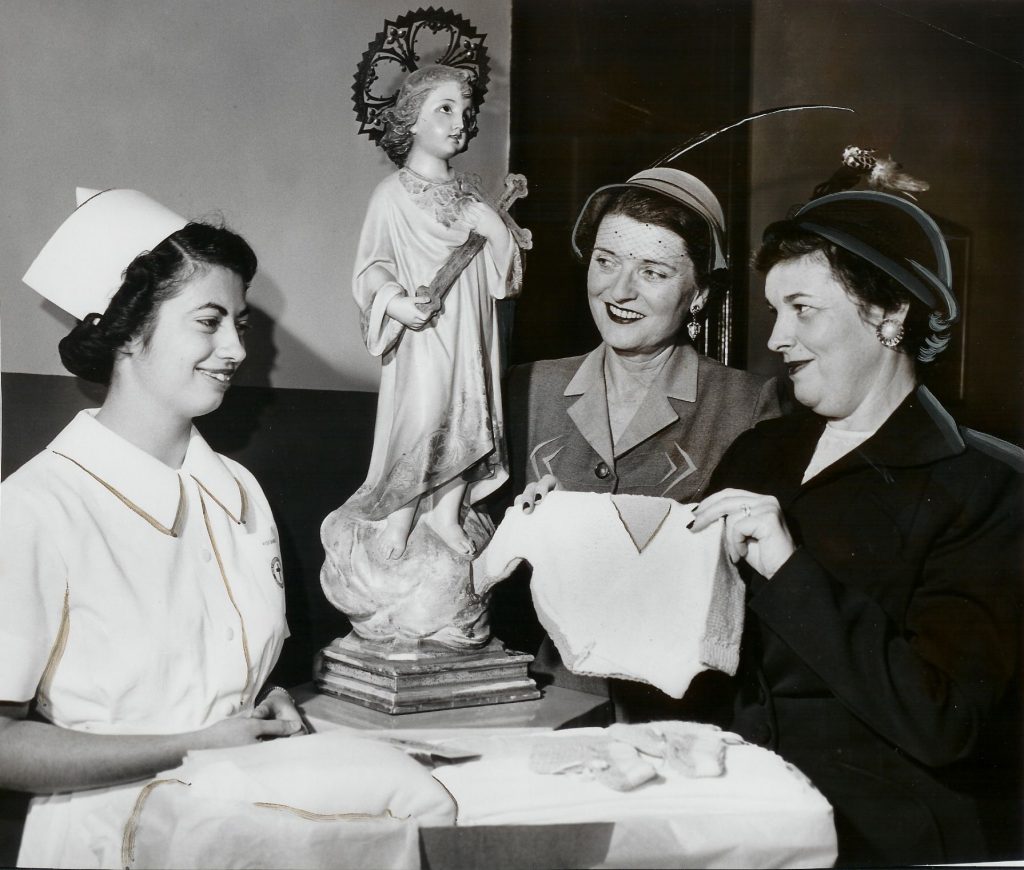 In its first 75 years, the Christ Child Society of South Bend has served more than a quarter million local children. So far, the Diocese of Fort Wayne-South Bend boasts the only two chapters in Indiana, one in Fort Wayne and the one in St. Joseph County.