The majesty and ceremony of the Catholic Church is manifested in a grand way during Holy Week. The blare of brass instruments and chorus of voices singing God’s praises opened the Chrism Mass at the Cathedral of the Immaculate Conception in Fort Wayne on April 11. Bishop Kevin C. Rhoades welcomed those in attendance, especially the priests who came to “renew your love and devotion” to their priestly vocation, as the bishop said.

More photos from the Chrism Mass

Chrism Mass always takes place days before the Easter celebration to bless the sacred oils – the oil of catechumens, the oil of the sick and chrism oil. These will be used by parishes throughout the year for baptisms, anointing of the sick and confirmation, and by the bishop in ordination.

Bishop Rhoades’ homily was delivered twofold: He spoke to everyone present about living an authentic Christian life; for the other part, he stood facing the priests seated behind the altar to speak directly to them. 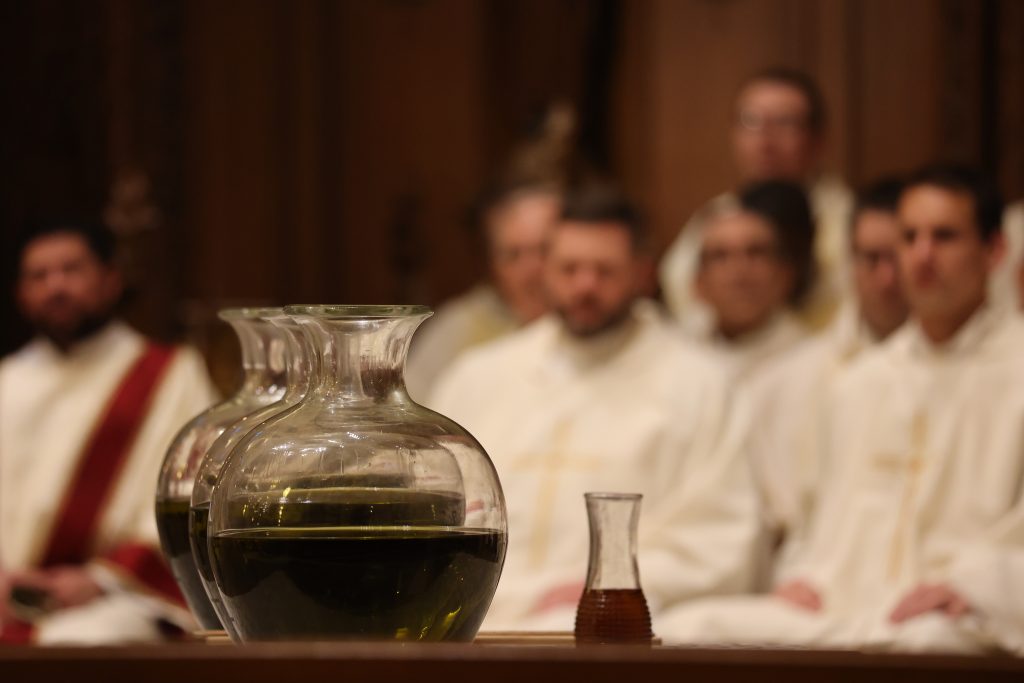 Jennifer Barton
Priests from Fort Wayne and the surrounding area listen as Bishop Kevin C. Rhoades speaks to them about the joy of their priesthood at the Chrism Mass at the Cathedral of the Immaculate Conception on April 11.

“Very early on, those baptized into Christ were called ‘Christians,’ which literally means ‘anointed ones.’ At baptism, we were anointed by the Holy Spirit and incorporated into Christ,” he began. “To be anointed is to belong to Christ and His kingdom. We have received a share in His anointing; we have been touched by His Spirit, and therefore we are called Christians.”

Being called a Christian is not enough, however. Bishop Rhoades emphasized the importance of a Christ-like life, always following God instead of belonging to the world. “How do we know if we are living our anointing as Christians? One way is if we manifest the joy of the Gospel. The oil we have been anointed with is, as Scripture says, ‘the oil of gladness.’”

“Can people tell that we were anointed with the oil of gladness?” he asked. “Gladness is the fruit of love. It is through love that we bring joy and peace to others.”

He continued, “Brothers and sisters, we were anointed to bear witness to Christ, our hope, and to His love, the love that overcomes sin and is more powerful than death.”

In addressing the priests, Bishop Rhoades reminded them to hold onto the joy of their priesthood, even during the hard times in their ministry, and to find joy in evangelization.

“My brother priests, we were anointed with the oil of gladness, the Holy Spirit, at our ordination.  I hope and pray that you continue to experience the joy of your vocation and are renewed in that joy today.”

Two of the priests present spoke afterward about their joy in renewing their priestly promises. Ordained 25 years ago this month, Father J. Steele, CSC, remarked, “It’s always beautiful and it’s very touching and it takes you back to the day you were ordained and you recall the people you remember who have passed. At 25 years, many of the priests that I loved in Holy Cross at that time, many of them passed on. And just the passage of time and how God is good across time … My life is as rich, maybe even richer now than it was 25 years ago.”

Brand new to his vocation is Father Daniel Koehl, ordained last year. For him, Chrism Mass was exceptional because “the last time I was in the cathedral with all the priests around was my own ordination. So to have that sort of revisited within the year is a beautiful thing itself.”

Many of the seminarians were present that evening, and that was special to Father Koehl as well, since in the coming years, he will be on the other side of the ordination ceremony, laying hands on the heads of his seminary classmates. “Now I’m there watching our seminarians come forward, that was kind of the most touching part of it.”

During the presentation of the bread and wine, the oils were also brought up to the altar and presented to Bishop Rhoades. Members of the Catholic community within the Fort Wayne area were chosen by the bishop to bring the oils forward. These included representatives of Catholic schools such as principals, campus ministers and one student; leaders in parish faith formation; religious sisters and Catholic business leaders.

Nancy Yorke and Jackie Oberhausen were among the group that had been invited to present the oils in 2020, but were unable to do so due to the pandemic. Both women were grateful to fill that role this year.

Yorke stated, “I felt so humbled, so humbled. It was such an honor.” Yorke admits that she did not understand the Chrism Mass in her younger years, but has come to learn its significance and enjoys it. “I just felt like a fountain bubbling up with joy.”

“It was beautiful; I felt very humbled, but very honored to be asked, so it was quite a blessing,” Oberhausen added.

A little-known fact about the sacred oils is that those blessed last year need to be disposed of properly before the new ones can be used in churches. For the last 22 years, this has been Oberhausen’s appointed task for Our Lady of Good Hope Parish in Fort Wayne. She spends the day of the Chrism Mass emptying the jars, burning the oils and washing the jars to be refilled that evening. The sweet smell of chrism that lingers about her person calls to mind the sacred anointing of all Christians to live as Christ; or, as Bishop Rhoades put it, to “spread the joy that comes from our faith in Jesus, a genuine faith that is lived in love.”