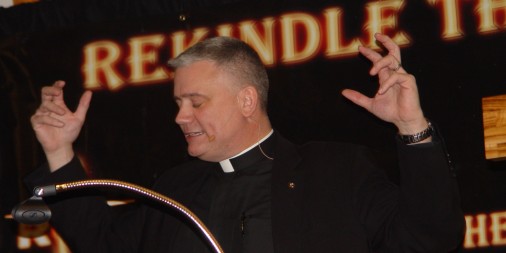 Father Larry Richards, the marquis speaker at the Feb. 6 Rekindle the Fire men’s conference at St. Vincent de Paul in Fort Wayne, was both animated and poignant in urging attendees to become the men God created them to be.

St. Vincent de Paul Rekindle the Fire Men’s Conference ignites men’s faith
FORT WAYNE — To be a man, or not to be a man. That was the question.

Or, at least for those who attended the Feb. 6 Rekindle the Fire Men’s Conference at St. Vincent de Paul in Fort Wayne, that was the unofficial theme of the day.

No, the sold-out event didn’t adopt a Shakespearean motif. Instead, it focused on men becoming the men God wants them to be, with special emphasis on the de-feminization of today’s male and a renewed vigor toward the essence of authentic masculinity, specifically concerning one’s faith.

Featuring speakers Jon Leonetti, Jason Garrett and Father Larry Richards, the nearly-400 men who came from as far away as California were treated to a spirit-filled day saturated with laughter, introspection and an occasional tear.

Afterward, the St. Vincent Parish Hall was slammed to capacity as men from various walks of faith — though predominantly attended by Catholics — were entertained, captivated and, most especially, challenged by the trio of speakers.

Leonetti, the 24-year-old who is best known for his nationwide walk that covered 12 states, over 3,500 miles and legions of “people” encounters along the way, encouraged the men to live a life of renewal “by deepening their love for our Lord through prayer,” the passionate, lifelong Catholic said. “I’m the most unoriginal man you’ve ever met,” he began his talk. “Everything I am or have, came from someone else. I don’t care who you are, what you’ve done, where you come from, the hounds of hell have chased you out of your homes and off of your couch, to be here to hear the fire of God’s love.”

After the conference, Leonetti said: “I’ve never done a men’s conference before (this one). I tell you what — if every men’s conference was like this … the Lord is doing some great things for (the men of Rekindle the Fire). The spirit is moving.”

Garrett, a 1988 graduate of Bishop Dwenger High School and founder of the Apostolate Center, implored the attendees to seek out God’s holy word and, in doing so, help rebuild the crumbled walls in our world.

“I am first and foremost a son, second a husband and third a father,” said Garrett, who also spoke last year at the annual event. He challenged the men to be co-redeemers to their heavenly Father, and asked them to write down two or three things that they could do in this quest, along with their name and phone number, before trading that information with another man at their table.

“I was not expecting that,” said St. Vincent parishioner and Rekindle the Fire member Sean Lyons. “Basically, it’s ‘Brother, I’m going to be checking up on you every week.’ It’s that accountability factor that says, ‘I’m going to be with you on your road,’ that I have not seen from other conferences.”

Father Richards, the nationally syndicated radio host and Pennsylvanian pastor (he’s an avid Steelers fan, and he’ll let you know it), was the conference’s headliner. Known for his in-your-face truths and razor-sharp wit, Father Richards did not disappoint; men could be heard laughing throughout the day, as Father Richards intertwined personal anecdotes with scripture and doctrine the way only he can.

With an emphasis on men acting like men — his most recent book, aptly named “Be a Man,” was the cornerstone for his first talk — Father Richards urged those in attendance to seek God’s forgiveness often, segueing the 90-minute lunch break which brought with it an opportunity for reconciliation. All told nine priests, including Father Richards, heard confessions during the intermission.

Father Richards said a husband’s and father’s solitary goal in life is to ensure that his wife and children make it to heaven. “Nothing else matters,” he said. He echoed this thought throughout the day: We’re either going to heaven or to hell.

“Challenge yourself daily,” said Father Richards, whose brash style and comedic approach was a dramatic shift from past speakers. “Am I the man God wants me to be?”

He concluded the afternoon session with an impassioned plea, a homework assignment of sorts: each man was asked to write letters to their children and wife, telling them that they loved them. The catch? The sentiment was to be written as if today was their last day on earth.

“You’d have to be dead not to feel the power of the Holy Spirit in that room,” Lyons said.

The fifth annual Rekindle the Fire men’s conference is tentatively scheduled for Feb. 19, 2011. If this year’s installment was any indication, be sure to reserve your tickets well in advance.