“For decades now, what have we done with our country: coups d’etat, mutinies, repeated rebellions?” said Cardinal Dieudonne Nzapalainga, president of the bishops’ conference.

“We see the result in deaths, scenes of pillage and acts of destruction. But behind these events, I ask myself if there’s also manipulation and instrumentalization, a wish to divide the country and a hidden agenda.” 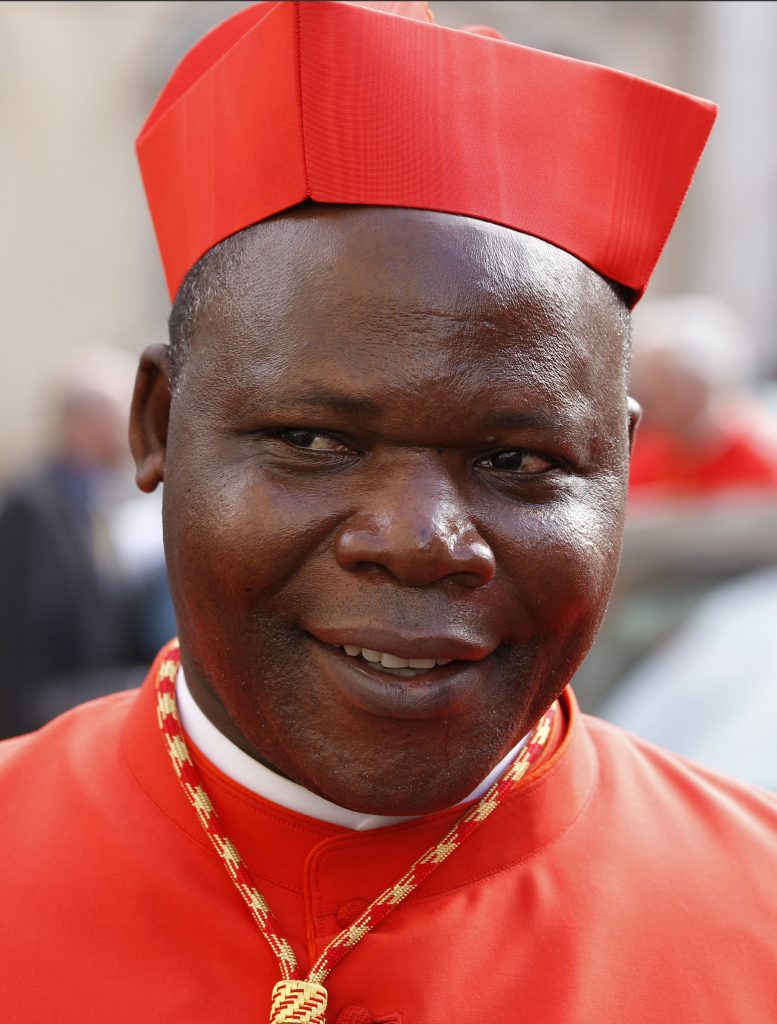 Cardinal Dieudonne Nzapalainga of Bangui, Central African Republic, is seen at the Vatican Nov. 19, 2016. In early May, the cardinal warned against revenge after a priest and at least 24 lay Catholics were killed during a gun and grenade attack on a Mass in the country’s capital. (CNS photo/Paul Haring)

Cardinal Nzapalainga spoke May 2, the day after an attack on Our Lady of Fatima Church, close to Bangui’s mostly Muslim PK5 neighborhood. After the attack, a mosque was burned.

The cardinal appealed to the government and U.N. peacekeeping forces to “throw light” on the atrocity and ensure justice was done, but added that local Catholics should also resist the urge to retaliate.

“The whole Christian community, not just in our country, has been plunged into mourning, after brothers and sisters who came here for Mass encountered suffering, injury and death instead,” said Cardinal Nzapalainga. “It’s at most difficult moments like this that true heroes arise and find the strength to propose an alternative, saying no to the evil of violence, barbarism and destruction, and choosing the good of love, forgiveness and reconciliation.”

Dozens of Catholics were injured in the attack on the church, which was packed with 1,500 people for Mass on the feast of St Joseph.

A researcher for Human Rights Watch told The New York Times that roughly 75 percent of the Central African Republic was controlled by armed groups. He said violence had been increasing since February, largely because earlier peace efforts failed to disarm militia groups.

Radio France International named the dead priest as Msgr. Albert Toungoumale-Baba, from the neighboring St. Mathias Parish, and said the incident followed an attempt by security forces to arrest a militia leader from PK5 on a nearby street.

It added that the priest’s body had been carried toward the residence of President Faustin-Archange Touadera by a “large, angry crowd,” which was dispersed after it destroyed the mosque in Bangui’s Lakouanga district.

U.N. troops remained on alert May 3 against further violence, while Touadera declared two days of mourning and visited Cardinal Nzapalainga to convey condolences.

Kobine Layama, the country’s chief imam, condemned the attack as an attempt to disrupt “peace, social cohesion and coexistence.”

Serge Benda, archdiocesan youth coordinator who was at the Mass, told the France24 TV network the attack had occurred after the Gospel reading, following an exchange of fire with police outside the church.

He added that five assailants had shot at the congregation with Kalashnikov rifles and thrown two grenades, one of which killed Msgr. Toungoumale-Baba close to the pulpit.

Carmelite Father Federico Trinchero described the dead priest as “well known, esteemed and loved by the people,” adding that he had sheltered large numbers of refugees of various faiths at his church during the Central African conflict.

A previous attack on Our Lady of Fatima Church in May 2014 left 18 Catholics, including a priest, dead.

Cardinal Nzapalainga rejected suggestions the conflict had a religious dimension and said Christians and Muslims were now “one people, working arm in arm” for peace and reconciliation in the country.

“Claims of a confessional crisis are instrumental and manipulatory, an attempt to divide people — we must be careful not to fall into this snare,” the cardinal told journalists.

“No imam has appeared at the front with arms, and no priest has held a weapon, so how can this be confessional? Instead, people have come here, thrown grenades and opened fire. We now need to find these people, so they’ll answer for their deeds.”