On Aug. 5, Bishop Kevin C. Rhoades celebrated Mass with the Our Lady of Victory Missionary Sisters in the Archbishop Noll Memorial Chapel on the Victory Noll campus in Huntington. The Mass took place in commemoration of the beginning of the centennial jubilee celebration of the establishment of the order.

Founded in 1922 by Father John Joseph Sigstein, the order was dedicated to Mary under her title “Our Lady of Victory.” Archbishop John F. Noll, who was serving as a priest in Huntington at the time, supported the sisters in their mission and helped build what would become Victory Noll, named, in part, in his honor. Their mission was to provide education and health care for the poor in areas of the country that were underserved. The first two sisters, Julia Doyle and Marie Benes, were sent to New Mexico in 1922. 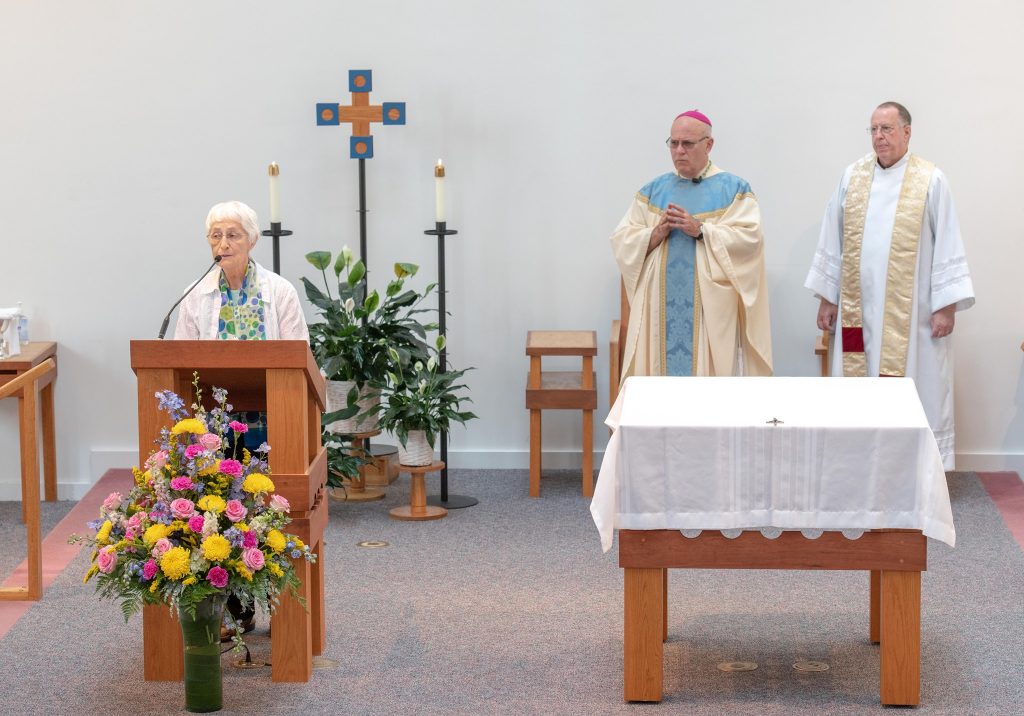 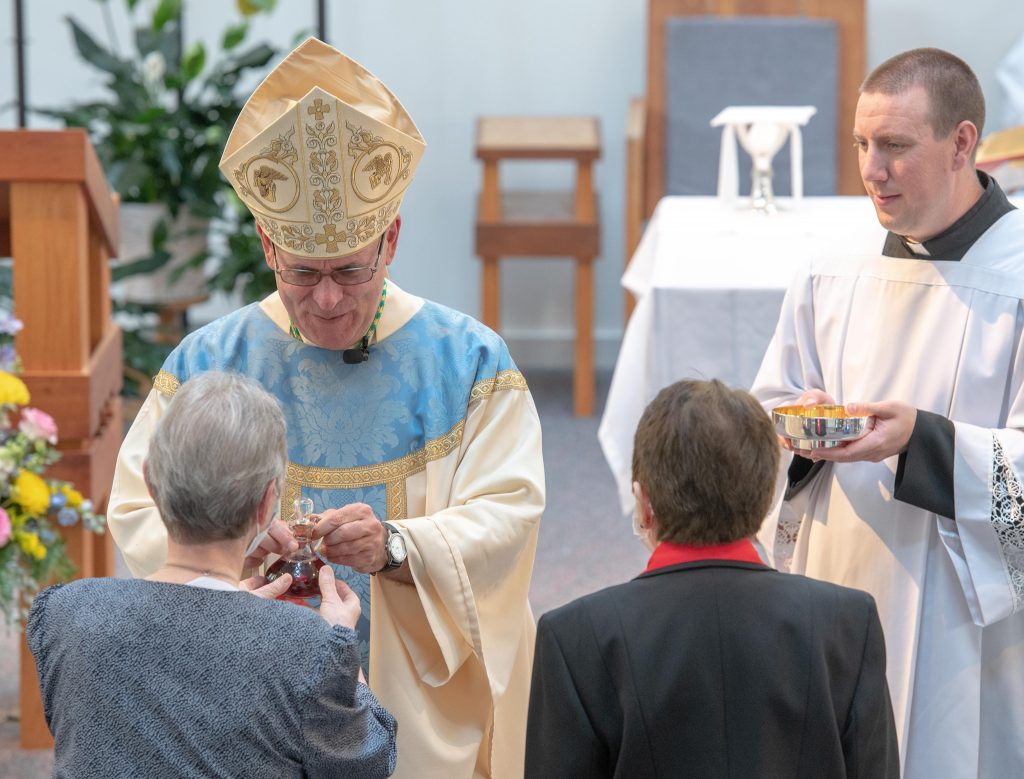 In the decades following, the missionary sisters went wherever they were needed, not being tied to a particular school or parish. This allowed them to catechize and bring social services to the poor throughout the country, a task they still realize through ministries in places like Chicago, New Mexico and California.

In his homily for the Mass, Bishop Rhoades expressed his gratitude for the work of the sisters in the past 100 years, saying, “In this jubilee year, we remember and give thanks to God for you and all the consecrated women of Victory Noll who have faithfully lived the consecrated life. You have been, and continue to be, a gift to the Church. Your consecrated life, lived after the example of our Blessed Mother, the first and most perfect disciple of the Lord, is a beautiful witness to Jesus, the chaste, poor and obedient One and to His Gospel of salvation.”

He pointed to the example of Mary, which the Victory Noll sisters try to emulate in “her spirit of simplicity,” according to their website. Bishop Rhoades noted that Mary’s actions demonstrated her faith, particularly when she made the journey to visit Elizabeth in her time of need and compared this to the service of the sisters.

“You and so many Victory Noll sisters through the years have followed Jesus on the itinerary of Mary’s pilgrimage of faith, going out in faith to serve amid hardships and challenges of many sorts. Like Mary, you bravely followed God’s plan for your life, including the sorrow of completing your mission as a community. Mary’s faith was perhaps most evident at the foot of the cross. The cross is our ladder to heaven, as St. Rose of Lima once said.” 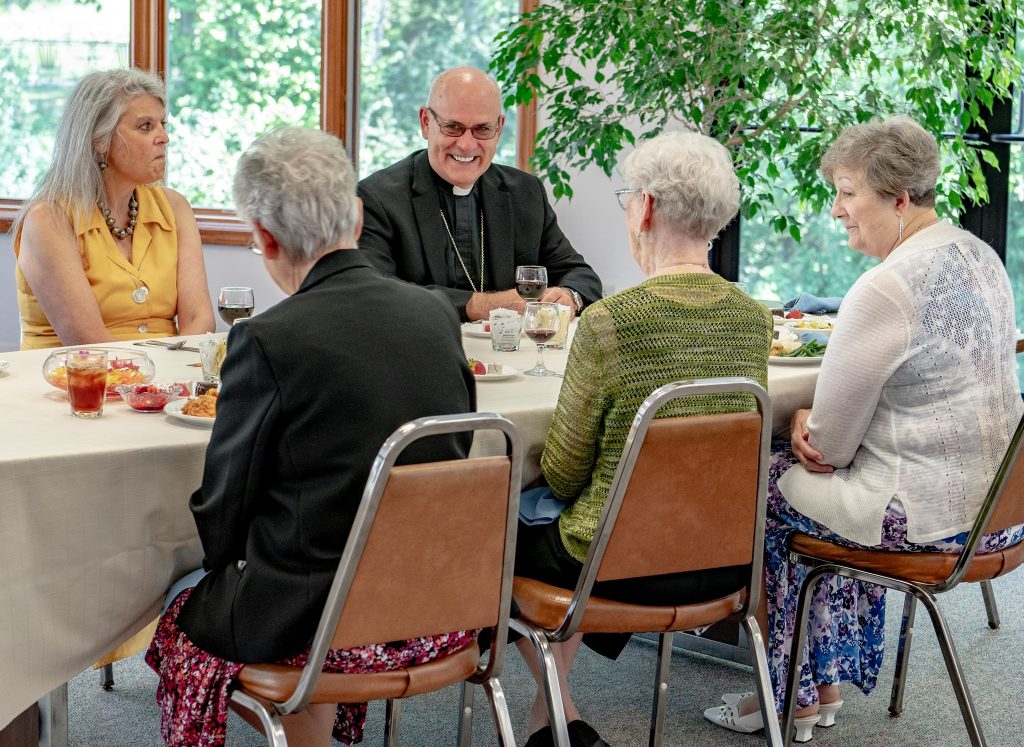 He concluded, “The Our Lady of Victory Missionary Sisters have carried God’s word to thousands of people these past 100 years. Only the Lord knows the many, many fruits of your labors in His vineyard. Today and throughout this jubilee year, we remember and give thanks for the holy mission of your congregation. May God bless you and may Our Lady of Victory continue to intercede for you!”

Sister Mary Jo Nelson, president of the leadership team, was pleased by the bishop’s words and his knowledge of the sisters’ history as well as the role that Mary plays in their lives.

“What he said really spoke to the sisters,” she said, noting how he greeted each of them by name after the Mass. The bishop also posed for a photo with the sisters in the same location where a 1925 photo took place with founder Father Sigstein, to commemorate the completion of the building of the motherhouse.

To have Bishop Rhoades present after the lapse during COVID-19 last year, Sister Mary Jo said, “was delightful, He added a lot of joy and expressed his gratitude” for the work the community has done in the last 100 years, most of it outside of the diocese. 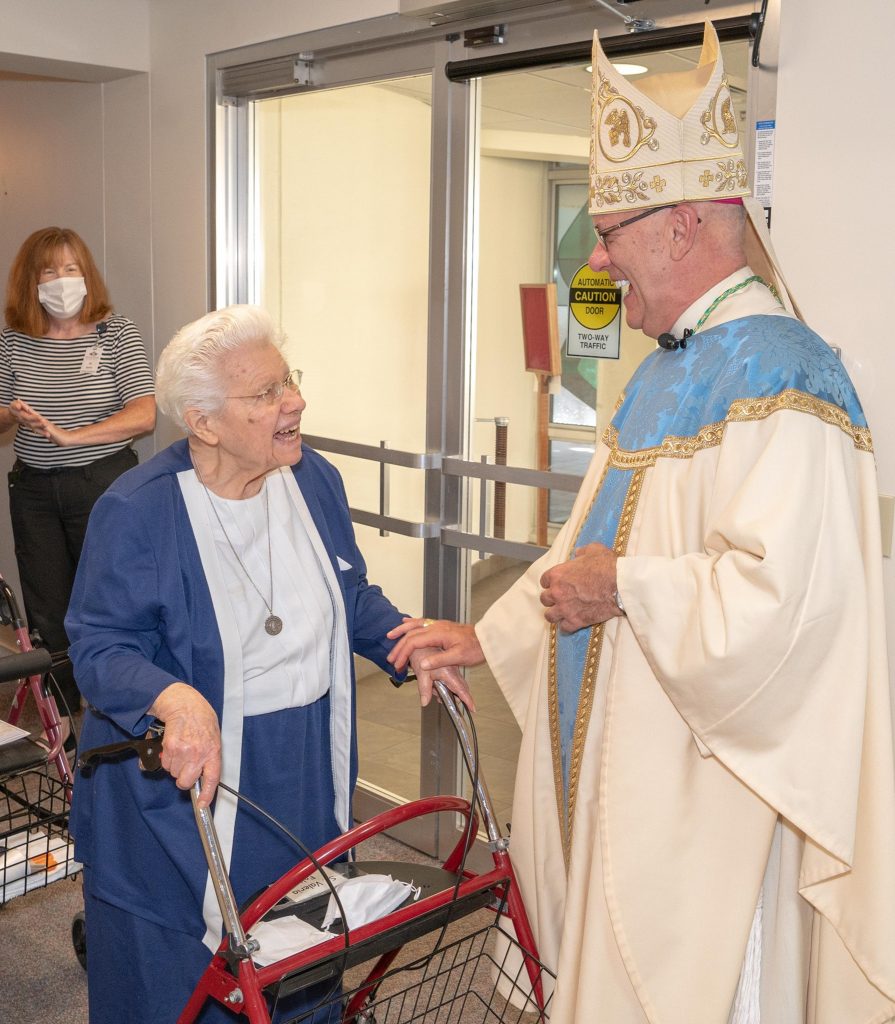 After a Mass opening the year of jubilee to celebrate the 100th year of the founding of Our Lady of Victory Missionary sisters, Bishop Kevin C. Rhoades greets Sister Valeria at the Victory Noll community in Huntington.

For the upcoming jubilee year, the sisters are working on plans for celebratory events, contingent upon the challenges of the pandemic. The committee in place of planning events is looking to host a large celebration next year with family, friends and former members.

In addition to the upcoming year being a time of celebration, it is also a time of discernment for the sisters. Sister Mary Jo stated that the community “gets smaller, and the structures change.” She remarked that “when a sister is in her elderly years, her mission is prayer and presence.”

This includes praying for the greater good of the world. One way they accomplish this is a once-weekly “Wednesdays for the World,” in which the sisters gather for contemplative prayer for a different theme each week. Previous nights have included praying for the climate crisis, systematic racism, immigration and immigrants themselves, and elected leaders.

“This is a way for the sisters to keep the larger world in prayer,” she said. Additionally, there are several younger members of the order who do not live at Victory Noll but continue in the day-to-day missionary work of the original sisters.

With their extensive, sprawling buildings and grounds, the sisters have had to consider new purposes for unused spaces. After conversations with city and county leaders, the sisters agreed to sell their buildings to Huntington County rather than demolish them. The county will use these spaces for an addiction rehabilitation program known as the O’Donnell Center, which Sister Mary Jo stated that the sisters strongly support. A hundred and seven acres of woodland and prairie on the property has already been sold to ACRES Land Trust, an organization dedicated to preserving wilderness areas from development. And Saint Anne Communities will continue to operate a retirement community on the Victory Noll campus, which remains separate and independently owned. 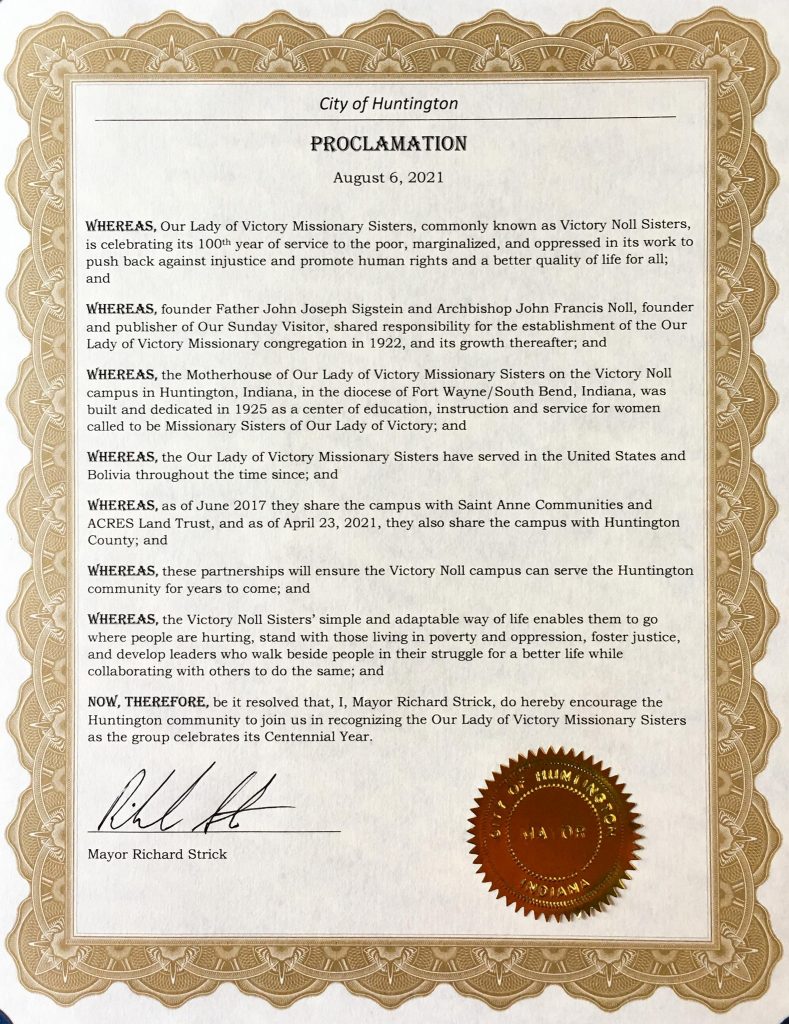 Huntington mayor Richard Strick presented the Our Lady of Victory Missionary Sisters with a proclamation Aug. 5 recognizing their charitable works both locally and throughout the country. The sisters are celebrating the 100th anniversary of the order’s founding this year.