One hundred years ago, on Oct. 13, 1917, Mary appeared for the final time to three shepherd children in the countryside of Fatima, Portugal. Bishop Kevin C. Rhoades recalled this day with a special Mass exactly 100 years later at St. Matthew Cathedral, South Bend, after which he offered a plenary indulgence to the prepared faithful who were present.

Also hosted by the World Apostolate of Fatima and Our Sunday Visitor, the Mass marked the end of the year of the centennial of the apparitions. 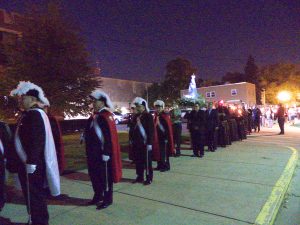 Fourth Degree Knights of Columbus lead a procession around St. Matthew Cathedral in South Bend Oct. 13 following Mass, on the occasion of the 100th anniversary of the Marian apparitions in Fatima, Portugal. Bob List

A Marian procession began the liturgy, with men carrying the traditional image of Our Lady of Fatima, dressed in light blue lights. Next, three young children dressed as Lucia Santos, St. Jacinta Marto and St. Francisco Marto — Genna Renbarger, Gloria Renbarger and James Reidy, respectively — walked with rosaries in hand. Their presence reminded the faithful of the reality of the apparitions, and their appropriate, beautiful costumes of simple brown cloth were also a reminder of the particular age and place that Our Lady visited. She chose a small, remote, poor part of the world to share her special message.

Members of the Knights of Columbus and Equestrian Order of the Holy Sepulchre followed the children. Marian High School and Saint Joseph High School formed a combination choir to offer songs in praise of Mary’s visit and God’s mercy, and people from around the area, representing numerous parishes, packed the cathedral. A sense of gratitude, anticipation and solemnity filled the holy space: Some of those present had prepared for weeks for the special day. 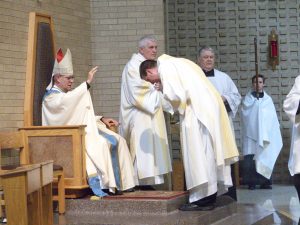 Deacon Brian Miller acknowledged the significance of what transpired a century ago when he said, “This was the first public miracle since the Resurrection itself that was foretold and spoken of in advance, confirming the gravity and importance of the message of Our Lady of Fatima. The children were afraid that people would not believe them, because they were children. But Our Lady explained that this miracle would let all people know that the apparitions, and thus her messages, were real.”

In his homily, Bishop Rhoades focused on the intercessory role that Mary has and continues to play in human history. “It is through Mary that God opened for us the fountain of salvation for all time in the Incarnation of his Son,” he said, and later continued, “Mary has always been the help of Christians. One hundred years ago, she appeared to the shepherd children at Fatima not only to help them to become saints, but to help us and all the world. She came to warn us about the evils threatening humanity, to issue an urgent call to conversion and penance. Mary gave the children a message of peace and hope at a time when the world was engulfed by war. She plays a pivotal role in the great struggle between good and evil, between her Son and his disciples and Satan and his followers. Mary, the great accomplice in her Son’s work of redemption, is our help, the help of Christians, in this battle. At Fatima, she assured us of the final victory when she said: “In the end, my Immaculate Heart will triumph.”

He emphasized, “Probably Our Lady’s most heartfelt plea on Oct. 13 was this, and Lucia said that when making this plea Our Lady looked very sad: ‘Do not offend the Lord our God anymore, because he is already so much offended.’ Mary knows the price that God’s love paid for our sins — the death of her Son on the cross. We can recognize the face of Our Lady of Sorrows at this October apparition.” 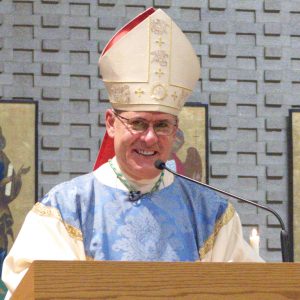 The bishop continued, offering this advice: “But I wish to give one very concrete suggestion: to pray the rosary every day. Many of you may already do so. Our Lady of Fatima is Our Lady of the Rosary. She asked for the daily prayer of the rosary for peace in all six of her apparitions to the children of Fatima. … So, as we finish this centennial observance, I invite you to discover or rediscover the beauty and power of the rosary, a gift of Our Lady as a true compendium of the Gospels, to help us in the spiritual battles we face today.”

Trusting in Mary’s intercession, remembering that her Immaculate Heart will triumph, the faithful prayed the Jubilee Prayer of Consecration after Mass, as well as the Fatima Prayers during an hour of eucharistic adoration and benediction after Mass.

Mary Daily Korson of Mishawaka, who came with her husband, Ray, and young son, said of the Mass, “It was wonderful to gather with so many people in our diocese to commemorate the apparition of Our Lady at Fatima and prayerfully reflect on her message, which is still so pertinent today. We have recently returned to the daily praying of the rosary in our family, so it was so good to hear our bishop’s encouragement in this practice. Growing up, I had a certain fascination with Our Lady of Fatima. That she had appeared less than 100 years before, in the same century that I was learning of it, and to children my age, made the faith and her motherhood more real to me. Through the years I’ve kept an affection for Our Lady and her image at Fatima, so it was extra important and special to me to participate in a celebration of the 100th anniversary.”