In response, concerned Catholics around the Arlington diocese recently organized educational conferences to inform the faithful about the issue and urge them not to be afraid to speak up when confronted by transgender advocates but to do so with love rooted in the biological truth about men and women.

At St. Theresa Church in Ashburn, Virginia, about 125 people attended an Oct. 23 program on “Gender Ideology: The Cultural Challenge and the Catholic Response.”

The previous week, the Blessed Sacrament Church men’s group in Alexandria, Virginia, hosted a guest speaker on the subject. 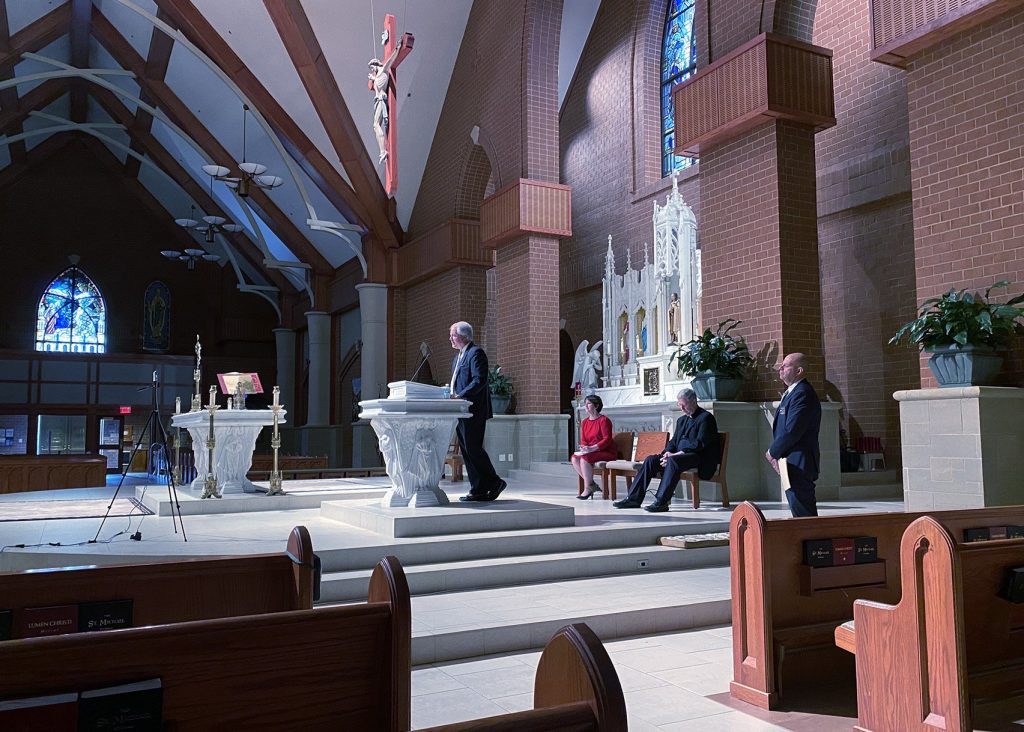 Frank J. Moncher, psychologist and diocesan director of victim assistance for the Diocese of Arlington, Va., addresses a question from the audience during the “Gender Ideology: The Cultural Challenge and the Catholic Response” conference at St. Theresa Church in Ashburn, Va., Oct. 23, 2021. (CNS photo/Kevin Schweers, Arlington Catholic Herald)

In Loudoun County, the new policies enacted Aug. 11, for example, require the use of pronouns that may not correspond with biological sex. County school board meetings have drawn hundreds of protesters and become fodder for national cable TV and talk radio programs.

Several teachers represented by Alliance Defending Freedom have filed litigation to suspend the policy, citing concerns that it would compel “faculty and students to speak a message contrary to their beliefs.” A court hearing is scheduled for Nov. 8.

This year, Arlington Bishop Michael F. Burbidge promulgated “A Catechesis on the Human Person and Gender Ideology” as a resource to help Catholics respond to questions of gender with clarity and charity.

In an Oct. 19 appearance on “Catholic Answers Live,” a radio show syndicated on hundreds of Catholic radio stations across the country, he discussed the reaction that the catechetical resource generated.

“I would say overall, within my diocese and even beyond, we have received a very favorable response,” Bishop Burbidge said.

Many Catholics who believe God created people as man and woman, he said, have told him the document provided the principles and wording to compassionately present that truth, in spaces such as in the workplace. “They know it’s true. We just wanted to give them the language to communicate.”

Bishop Burbidge said he was struck by the speed with which the transgender movement was embraced by some segments of the broader society over the past decade but at the same time he was “not surprised” because it was predictable “once you begin denying basic realities about the human person.”

Bishop Burbidge acknowledged that, even though speaking up can invite “false labeling” that paints Catholics as hateful or discriminatory, the faithful should not be deterred because transgender advocates “want us to be silent.”

Father James C. Hudgins, pastor of St. Theresa, echoed that theme in his opening address to attendees of the Ashburn conference, sponsored by the parish Respect Life Committee, Gabriel Project and Knights of Columbus council.

He described the beauty of God’s creation and encouraged Catholics not to be intimidated by what can feel like a cultural juggernaut of opposition.

“Every time you speak or act in defense of what’s good and true or stand up against the power of the mob, you inspire thousands, sometimes even millions of people to do the same,” he said. “Don’t be afraid to defend the good when it’s attacked. Secondly, don’t be afraid to take a stand no matter how small it might be.”

“We as Catholics need to begin from the starting point that every person has dignity,” said speaker Mary Hasson, the Kate O’Beirne fellow at the Ethics and Policy Center in Washington.

A parishioner of St. Veronica Church in Chantilly, Virginia, she has followed the gender ideology movement for years. The common ground she has found with those who disagree on this issue is the shared desire to help individuals experiencing gender dysphoria — even if their methods vary drastically.

“Living the truth is how people flourish. There is tremendous harm that comes to individuals and families when they go down this transgender road,” she said.

Hasson’s presentation offered advice to Catholics whose child or relative identifies as transgender: Convey warmth to that individual as a child of God and empathy for their feelings, without supporting actions or interventions that are ultimately destructive.

Frank J. Moncher, a psychologist who is the Arlington diocese’s director of victim assistance, said that medical studies that purport to demonstrate the efficacy of transitioning between genders are deeply flawed because they lack data on long-term physical and emotional outcomes.

The vast majority of individuals who experience confusion about their identity ultimately embrace their biological sex over time, he said.

Despite this, medical referrals for gender dysphoria conditions have grown astronomically in recent years, he noted, especially for adolescent females.

Schweers is executive editor of content at the Arlington Catholic Herald, newspaper of the Diocese of Arlington. Contributing to this story was Claire Chapman.

While some European nations eagerly embraced transgender surgeries and hormone therapies years ago, new data suggests that the anticipated mental health benefits have not materialized.

For instance, rates of depression and attempted suicide among those who assumed a new gender identity remained substantially higher than the general population.

Despite a brief “honeymoon” period after transitioning genders, Moncher said, conditions such as anxiety and depression ultimately resurface because the underlying mental health condition was never addressed.

A parishioner of St. Veronica Church, she attended the council’s Oct. 7-8 event in Leesburg.

“There is no better time to send your kids to Catholic school (than) right now,” she told the Arlington Catholic Herald, the diocesan newspaper.

Yet whether children attend parochial schools, public schools or are home-schooled, she said parents bear the responsibility to make sure children know the truth. “God never takes that responsibility away from you.”