Just west of Fort Wayne is the small community of Arcola. It may be something less than a one-stoplight town, but the community boasts a heart larger than its borders.

Since October, St. Patrick Parish in Arcola has been the site of a weekly Farmers to Families food distribution initiative. Farmers to Families is a government program that began this year as a part of the Families First Coronavirus Response Act to aid those who have found themselves in need due to the COVID-19 pandemic. A representative of a ministry in New York state who had been tasked with distributing the food boxes contacted Nikki Marker, co-pastor of Arcola United Methodist Church, to ask if she would like to have a truckload of food to distribute in her community.

Marker knew that the most convenient delivery spot in the community was St. Patrick. The parking lot is situated along Arcola Road, the main street, and has easy access via two entrances. And St. Patrick had already successfully hosted its annual fish fry as a drive-thru option, so she knew it was a viable location for food pickup.

She enlisted the aid of Sally Strack, a longtime parishioner at the church. The two volunteer together in the local thrift store. Through word of mouth and emails sent out by the St. Patrick parish secretary, Patti Denihan, a group of volunteers quickly gathered to help tote the first round of delivery boxes.

“Just like the fish fry, people have come out of the woodwork to help,” Strack remarked. 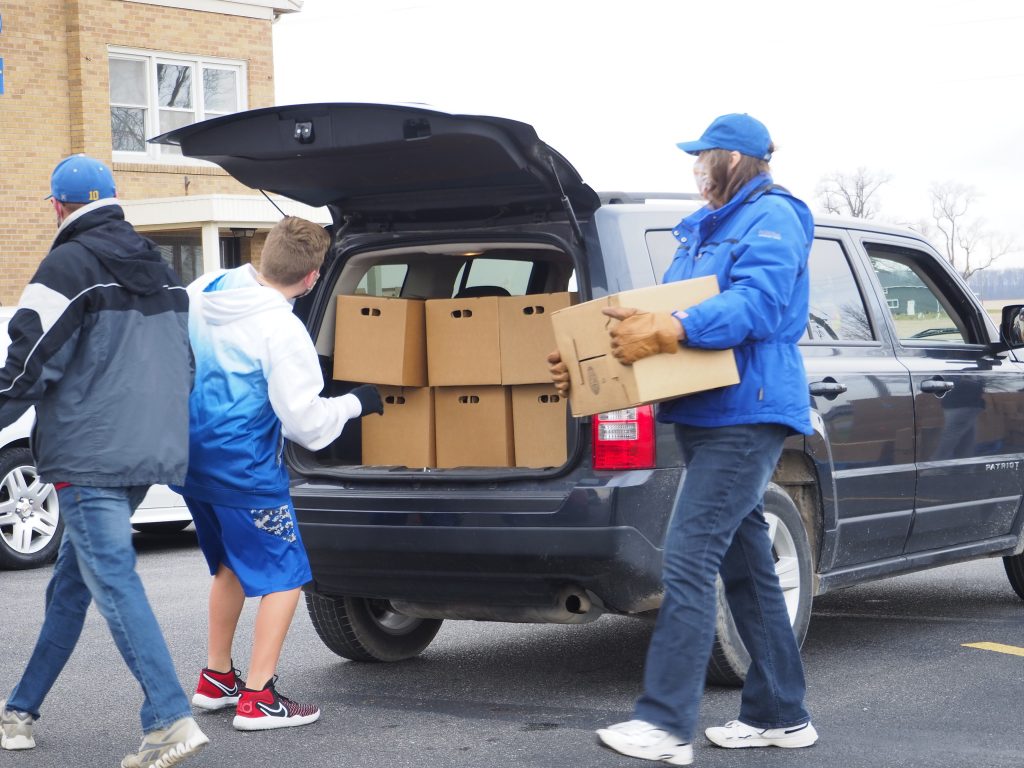 Photos by Jennifer Barton
Volunteers in the small community of Arcola help load boxes of food into the backs of vehicles in the parking lot of St. Patrick Nov. 21. The boxes are part of a coronavirus relief program called “Farmers to Families.”

Word got around. Volunteers from St. Patrick and Arcola United Methodist were joined by volunteers from other organizations, such as the Arcola Volunteer Fire Department and Carroll High School’s Future Farmers of America chapter. A handful of volunteers even loaded up their vehicles and distributed boxes to people who cannot leave their homes and to workers at the retirement homes near the church.

The boxes consist of 35 pounds of food, mostly dairy products and produce, which Marker and Strack believe contained roughly $50 worth of food. Strack reported that on delivery days people often began lining up nearly two hours in advance, and those who come range in age from elderly people to young families. They were encouraged to take a box for themselves and one for someone else.

“It’s for everyone, it’s not just if you’re in dire need. Everybody needs milk. I don’t know a family who doesn’t,” Strack stated. “Some of them get more than one box … they may have a huge family or they’re giving it to neighbors, so we want them to take them and give one away. We kind of worked with that premise from the beginning, so it works out for the good.”

“It’s been a blessing to be a blessing,” Marker added. 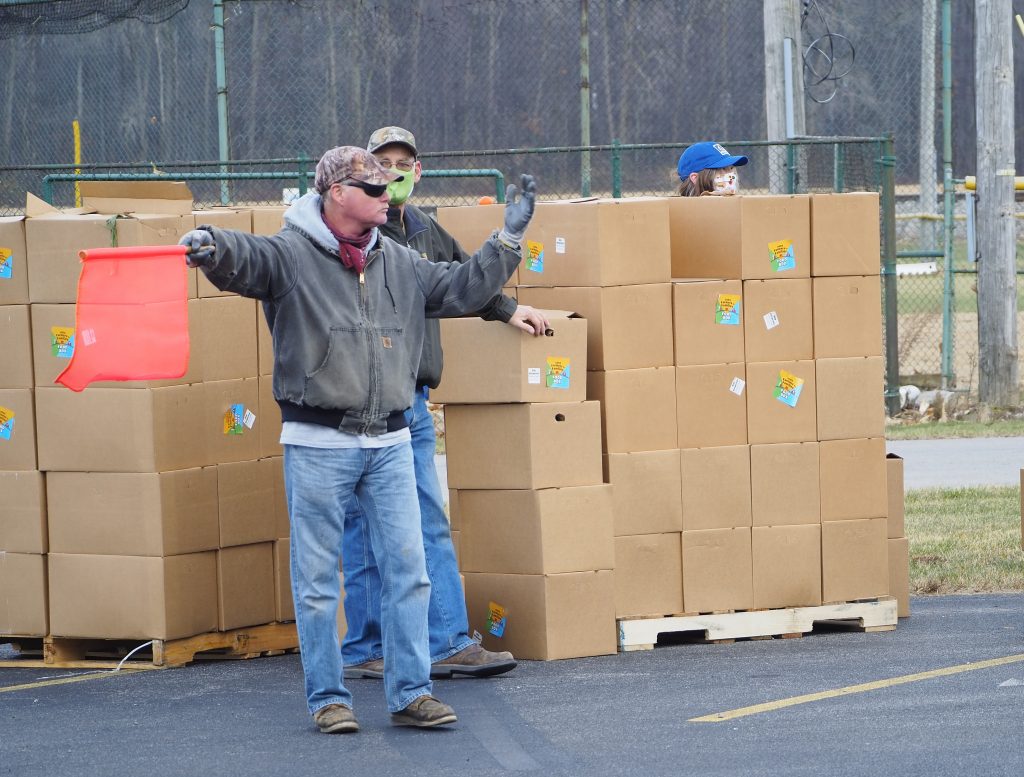 a man directs cars leaving the parking lot after receiving their boxes. The volunteer force was made up of parishioners of St. Patrick along with members of Arcola United Methodist Church, the local volunteer fire department and other groups from town.

While there were additional locations in the Fort Wayne area earlier in the year, the ladies speculate that St. Patrick is probably the only one that continued into the third wave of distribution, which must be completed by the end of the year. Arcola has already completed one set of six truck deliveries and is in the middle of another set.

The Strack family has been a huge part of this service. Sally’s daughter Sarah and her twin teenagers have been out helping load boxes.

“It’s amazing because we’re helping the people who need help through this hard time right now and through the holiday season,” Sarah commented.

Sarah is involved in the life of the parish as part of the flower committee, too. “I help wherever I’m needed.” She is proud of the contribution her family has made to assist the community, noting that she had many nieces and nephews come out to help on various days. Anybody who wanted to help was more than welcome.

Another parishioner at St. Patrick, Coleen Loeffler, also brought her family out to assist. Her daughter needed service hours for confirmation, so they chose to take the opportunity to help others at the same time.

“It was really touching to be able to provide food for some of the people who came through, and they were so appreciative,” she said. “I was really overwhelmed by how many cars were lined up when we arrived 30 minutes before it was supposed to start. Based on that, there seems to be a large demand for these type of food distribution days.”

On a recent distribution day, the line of cars stretched all the way down a country road, through town and out the other side, but the volunteers were not intimidated. With some of them directing cars into two drive-up lanes and others distributing boxes to multiple vehicles at one time, they were able to move the line along quickly. Two neighbors even loaned their forklifts to aid in unloading the truck and bringing pallets of food boxes from the back of the parking lot to the front when supplies ran low.

It has truly been a community effort. “This is Arcola serving the world,” said Marker.

Those who came out to help benefitted as much as those receiving the necessities. Loeffler stated, “I’m thankful that we were able to be a part of it and hope we can help again.”

The community expected to complete one additional delivery before the end of the year. That date was Saturday, Dec. 5, and almost certainly saw the same level of service to supply food to the long lines of people in need.