A pregnant teen girl killed by her baby’s father because she didn’t abort the child. Two babies discarded in dumpsters near a small college. These are some of the tragic stories that motivated the Knights of Columbus in Northern Indiana to fund a Safe Haven Baby Box in the South Bend area.

When former South Bend mayor Pete Buttigieg overturned their efforts to install one in his town, the Knights did not give up. Six months ago in nearby Mishawaka, Mayor David Wood announced his openness to allowing a baby box at a fire station in his city.

Ben Janszewski and Tim McBride, representing South Bend councils 10743 and 553, helped raise awareness of and funds for the baby box. Both men asserted that the work was a joint effort of many of the councils in South Bend and the surrounding area.

“This is what we’re about,” McBride stated. “The Knights are for life, make no mistake.” 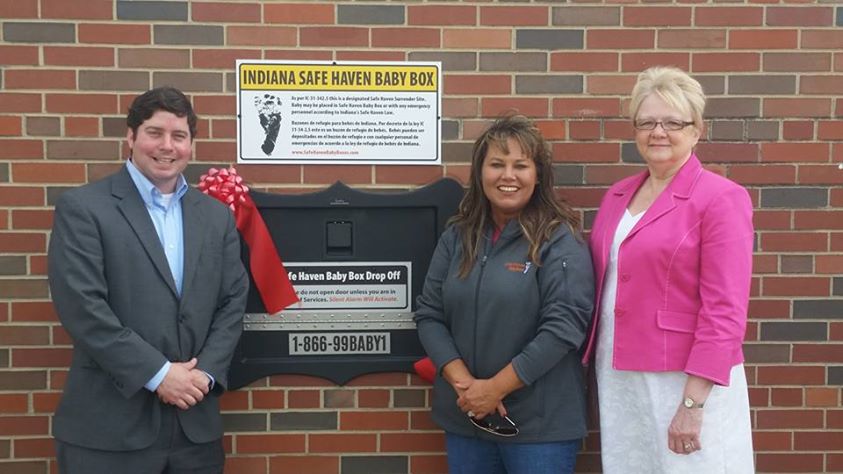 Photos provided by Chanel Cunningham
Safe Haven Baby Boxes have been installed in several Indiana cities to provide an option for mothers who cannot care for their newborns. In Mishawaka, the effort to install a baby box in that city was spearheaded by Knights of Columbus councils 10743 and 553. 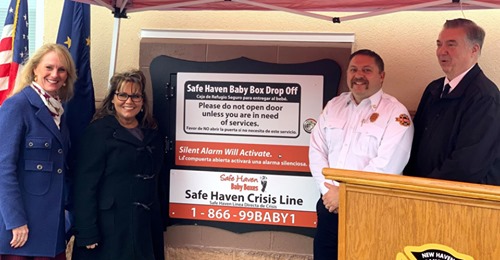 Janszewski was recently elected grand knight for the St. Therese Little Flower council. He became convinced of the need for greater action on his pro-life beliefs after viewing the movie “Unplanned” with his wife. “I never realized how intense it was in Planned Parenthood,” he said.

About three years ago, many of the councils began discussing the idea of sponsoring a Safe Haven Baby Box at regional meetings. Members opened a dialogue between the Knights, the Safe Haven organization and St. Joseph County Right to Life.

A box costs $10,000. A portion of that amount had already been raised when the original plan to install it in South Bend was derailed.

The release of the film “Unplanned” motivated Janszewski and his fellow Knights to make a baby box a reality in St. Joseph County. The councils placed donation boxes in the back of churches, and within six weeks the remaining funds had been raised. In another two weeks, the donation amounts had increased even more. The amounts given varied between $5 and $5,000, with the majority coming from the various South Bend councils.

“A large portion of the donations came from people really wanting to see this happen,” McBride said. “Anything we can do to encourage a mother, who is often alone at this time.”

Janszewski agreed, pointing toward the baby boxes already in place across the state and the few mothers who have safely given their children away in them.

“It costs so much, but if it saves maybe a dozen or so lives, is it worth it? Absolutely.”

The Knights also plan to continue their pro-life efforts by looking into an ultrasound machine to provide women in crisis pregnancies a view of their babies.

Janszewski moved to South Bend three years ago from Steubenville, Ohio, where his former council had funded one such ultrasound machine. “I never understood the impact of it before. An ultrasound really showed that it was a life. It is so needed,” Janszewski said.

While all 50 states have had laws on their books since 1999 allowing parents to surrender newborn babies at hospitals or fire stations without fear of prosecution, some parents are still afraid of doing so face-to-face and having to answer questions. That is where Safe Haven Baby Boxes come in. They allow an anonymous means of surrendering a child who cannot to be cared for, so that child can be adopted by a loving family.

Chanel Cunningham is director of programs and administration at Safe Haven Baby Boxes. She is also a member of St. Elizabeth Ann Seton Parish in Fort Wayne. She became involved in the organization when her husband, Scott, was serving as state deputy for the Knights of Columbus. Cunningham helped bring Safe Haven founder Monica Kelsey to Knights of Columbus events around the state as a guest speaker.

She supports the mission of Safe Haven to provide new mothers who might be alone and afraid with options for keeping infants safe. The organization offers education and awareness programs to communities by speaking in schools and community events, training emergency medical staff, running billboard campaigns and more.

Safe Haven is not only about placing emergency boxes in communities.

“We view the mission of our organization as bringing awareness of the Safe Haven laws,” she continued. The organization maintains a national hotline for parents in crisis, and Cunningham reported that they have received phone calls from all 50 states, Canada and Mexico.

Cunningham clarified that baby boxes are meant to be a last resort in the effort to save babies from life-threating situations.

“I’ve been around the office for two years, and even before then you’d get that comment: ‘How can a mother abandon their baby?’” She emphasized that Safe Haven does not judge mothers on the difficult decisions they are making. “We’re just focused on saving babies.”

In most cases, the baby boxes are a preventive measure. “It’s better to have the boxes and not need them than to not have them and need them.”

Ever since an abandoned baby was found deceased in Indianapolis in 2015, only one other baby has been abandoned outside of a hospital or fire station in Indiana, according to Cunningham. That child was found alive in a plastic bag in Seymour and was Hispanic. Armed with that knowledge, Safe Haven set to work providing information in Spanish to reach the Hispanic community. Translations were completed and distributed within a month.

“I feel like we’re making an impact,” Cunningham said.

In Columbia City, the mayor contacted Safe Haven to begin the process to install one there. Additionally, the Knights of Columbus have been part of the fundraising effort behind another baby box to be installed in Plymouth this year.

McBride doesn’t consider the work his council is doing for the lives of babies to be optional. “Anything we can do to encourage a mother, who is often alone, to have her baby, we’ll do it. We have the Women’s Care Center and all, but it’s my belief that this is a really good program.”

With the excess funds raised, the Knights of Columbus hope to convince the new mayor of South Bend, James Mueller, to allow a baby box in that community soon. Fundraising is already three-quarters of the way to completion, and McBride hopes that councils in Mishawaka will aid their metropolitan neighbor with this lifesaving effort.