WASHINGTON (CNS) — U.S. Catholics lead all Christian faiths in the percentage of racially diverse congregations in their parishes, according to a new study published by Baylor University.

“Catholic churches on average continue to be more diverse than Protestant churches with 23% multiracial, up from 17%” in 1998, when churches were first surveyed, the study said.

The reason: “largely white congregations that are gaining more color,” the study’s author, Kevin Dougherty, an associate professor of sociology at Baylor University in Waco, Texas, said in a Nov. 13 phone interview with Catholic News Service.

“In fact, that’s one of the conclusions of the article,” he said. “Although we do see an increase in the number of multiracial congregations, it seems to be a one-way street.”

By way of comparison, just 1% of Black Protestant congregations reported growing more racially diverse since 1998, according to the study. 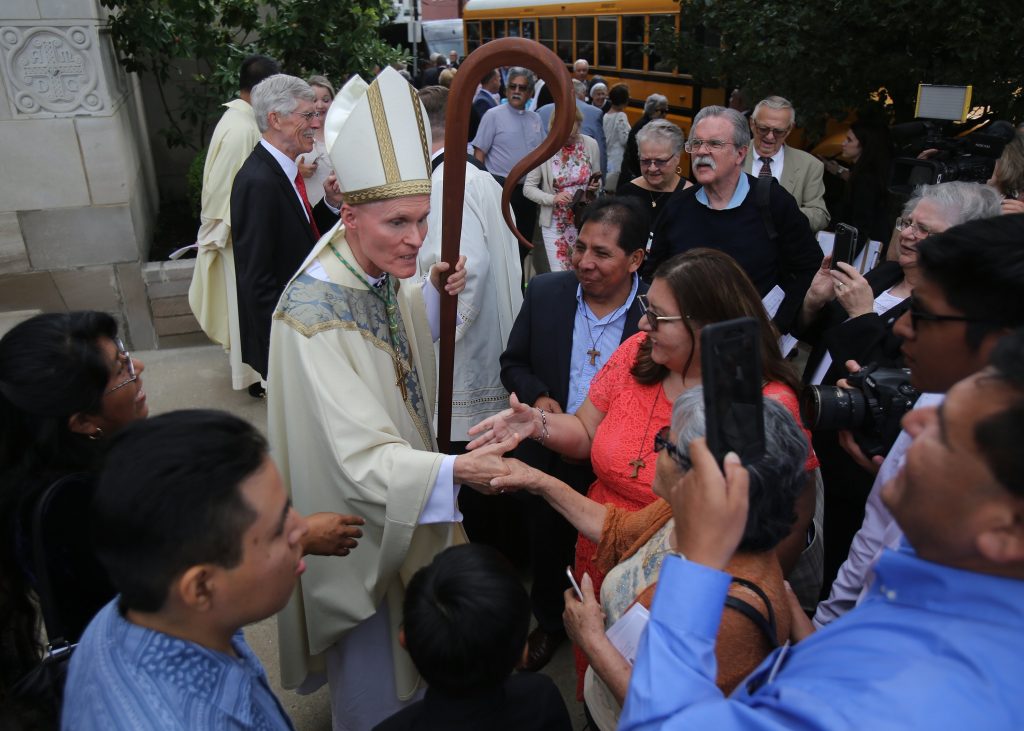 Bishop Mark E. Brennan greets people following his installation Mass Aug. 22, 2019, as head of the Diocese of Wheeling-Charleston, W.Va., at the Cathedral of St. Joseph in Wheeling. (CNS photo/Bob Roller)

Although studies do not exist for churches in other nations, few of them have the racial and ethnic diversity of the United States, Dougherty noted, which would make it more difficult for Christian denominations in those countries to replicate the diversity the United States is obtaining in its congregations.

Catholics may benefit from greater diversity because the faith is worldwide, he said. “The Roman Catholic Church is a global denomination. There are Catholic members in Southeast Asia and Latin America and Europe, and their immigrants to the United States are bearing that religion with them and they try to find a faith community that matches their own tradition.”

Paradoxically, Catholic parish boundaries — which were once so sacrosanct some parishes refused to register would-be members if they did not live within them — may also aid in congregational diversity, according to Dougherty.

“It’s exactly that model of parish ministry that is not really the province of Protestants. As the American neighborhood has become more racially mixed, the Catholic churches that serve those neighborhoods as a byproduct have taken on more diversity much more quickly than Protestant churches do,” he said.

By comparison, “in a typical southern Texas town, the Baptist church next to your house isn’t necessarily the one you’re going to attend. You’re going to drive across town,” he said. “Subconsciously, part of that is racial.

“Church shopping among Protestants has led to a hyper-segregation in a way that historically hasn’t been true in the Catholic parish-church model.”

Baylor itself recently shifted the sponsorship of the school from the Southern Baptist Convention — which had to deal with its own legacy of racism amid calls for a name change to further put that history in the past — to the General Baptist Convention of Texas.

Dougherty told CNS, “From prior research that I’ve done or that others have done, the reason that people join a multiracial congregation, is a desire for diversity. There is something appealing about that.”

Clergy may push their parishioners to be more diverse, but “the most successful long-term embrace of diversity is when it’s organically claimed by the congregation on the part of the laity,” he said. “Otherwise, it just becomes a failed initiative from the top.”

In 1963, the Rev. Martin Luther King Jr. famously said: “It is appalling that the most segregated hour of Christian America is 11 o’clock on Sunday morning.”

Today, Dougherty said, the most segregated hour is “5 or 6 p.m. at the dinner table. The American home is more segregated than the American Church.”