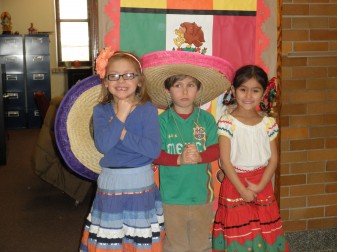 The 329 kindergarten through eighth graders at St. Matthew Cathedral School, South Bend, went Around the World in a Single Day on Monday, Jan. 31, the start of Catholic Schools Week. Following a random selection of a dozen and a half countries — from Mexico to France to Bhutan to Israel — students in each of the 18 classrooms researched the culture, customs and history, as well as the food, music and dance of their particular country. He day concluded with a festive “walkabout: (as the students in class 4A (Australia) called it), in which the classes took turns traveling from country to country. 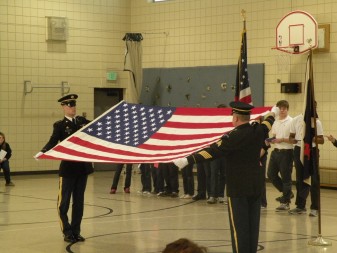 A patriotic tribute took place during Catholic Schools Week at St. John the Baptist School, Fort Wayne, to coincide with the theme, A+ for America. The student body gathered to thank veterans and current military personnel for the right to practice religious freedom. The program included a flag folding ceremony narrated by the student council. The two soldiers that presented the flag were Sgt. Alan Parr, regional coordinator for the Fort Wayne Honor Guard, and Pfc. Russell, member of the Fort Wayne Honor Guard team. Both soldiers are from the Joint Forces Headquarters, Indiana Army National Guard. The program also included the gift of a flag that had been flown over the battlefields of Afghanistan. The flag was a gift from St. John staff member Jeanine Skordos on behalf of her son, Cpl. Mikhail Skordos, U.S. Marine Aircraft Group 40. 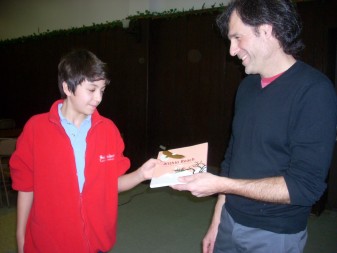 Jose Ontiveros , a seventh grader at St. Adalbert School in South Bend, visits with author and illustrator Peter Catalanotto. Ontiveros shares with the author a copy of “Within Reach,” writings and artwork by St. Adalbert students. All of the students autographed their pictures and writing in the book. Catalanotto was the guest at St. Adalbert School on Jan. 31 to kick off Catholic Schools Week. The author’s visit was made possible through a Magnificat Faculty Fellowship grant through the University of Notre Dame.