From an early age, Gavin Ealey has been blessed with a friendly disposition and a natural intellect, usually resting somewhere near the top of his class in school. Being the best and the brightest, however, is not what has pushed him to succeed first in elementary and high school, and now at the University of Notre Dame. His life’s goals and desire to improve himself gave him this drive. He was recently named as one of 30 students to receive a 2021-22 Realizing the Dream scholarship for first-generation students, offered through the Independent Colleges of Indiana. 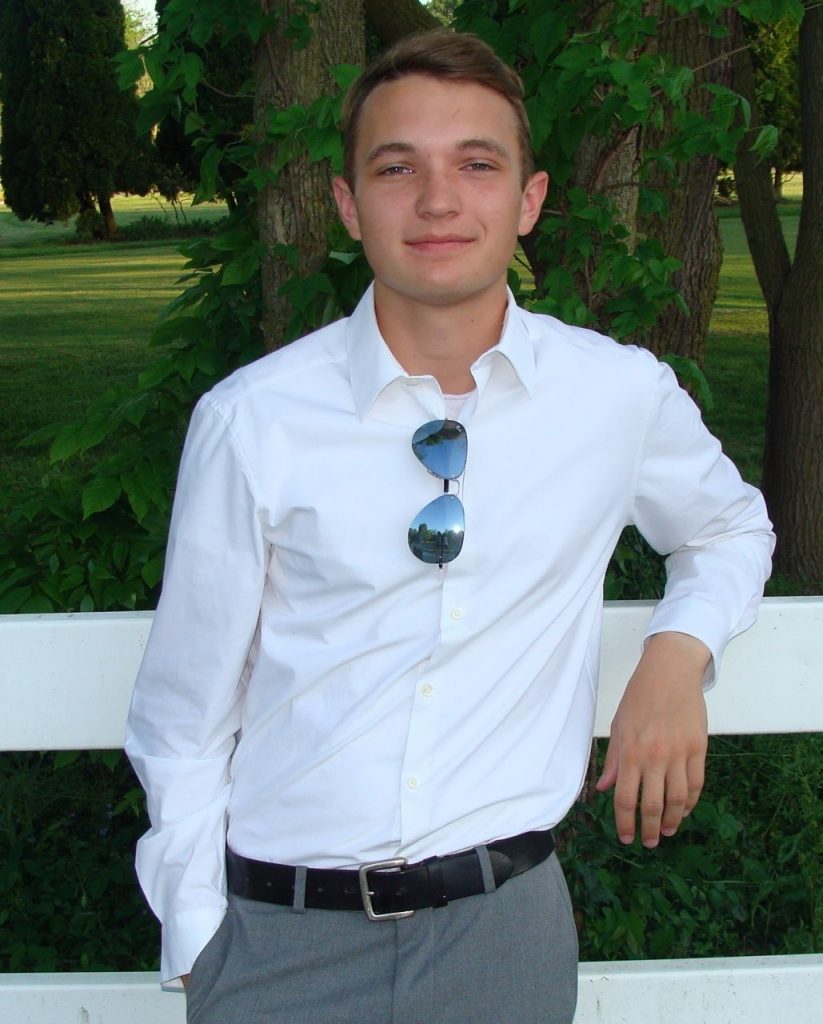 The scholarship is open to students whose parents and grandparents do not have college educations. Along with his brother Clay, two years older than him to the day, Gavin will be among the first generation in his family to earn a bachelor’s degree. He recalled that even though his father, Earl, did not earn a degree, he always urged his three children to pursue higher education. “He’s pushing us to be the best versions of ourselves. He’s very pro-education,” Gavin stated.

Gavin is a product of St. Aloysius School in Yoder, then Bishop Luers High School. It was at both places that he found the encouragement to grow as a student and a person. Teachers at both schools gave him the tools and the freedom to push himself academically, and he discovered a love for subjects such as chemistry, math and French at Bishop Luers. “Luers was very, very good to me,” he attested. His sister Elaine, five years his junior, is currently a student there and sometimes calls him for help with her studies.

When the time came for him to look at colleges, Gavin’s choices came down to a handful of schools, including the University of Notre Dame, the school from which his math teacher, Joe Crouch, graduated. Eventually, he whittled away all other options and the Catholic university rose above the others, partly for its small size, partly for its faith. Gavin said that, “having gone to a Catholic school my entire life, continuing my Catholic education was something I very much put a value on.” 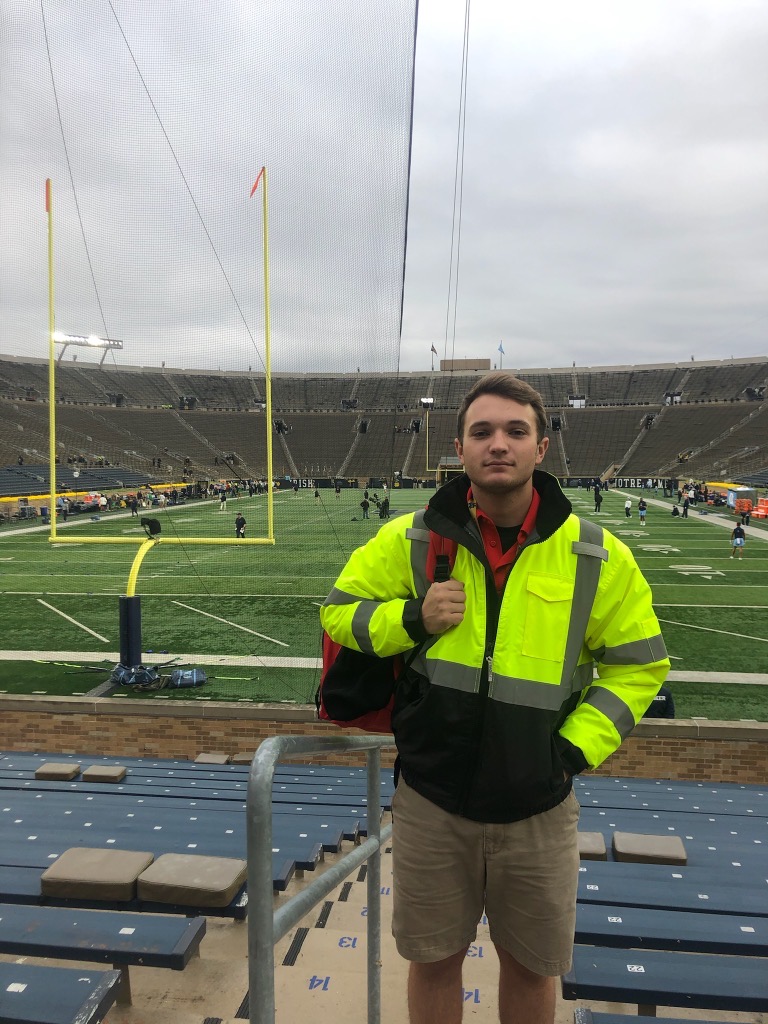 The community at Notre Dame has been a blessing for him. Like St. Aloysius and Bishop Luers, the student population is relatively small, and some of his classes have a similar student-teacher ratio as Bishop Luers. It is refreshing for him to walk the campus paths and encounter many people that he knows. Some of the friends he has made come from vastly different cultures and locales, such as Los Angeles in the U.S. and the Republic of Lebanon.

And he doesn’t feel a fiercely competitive spirit among the students, as he did at other colleges. “I feel like here, I’m on a team with my classmates, and my professor is on that team and the only thing that we’re facing is the material,” Gavin declared. 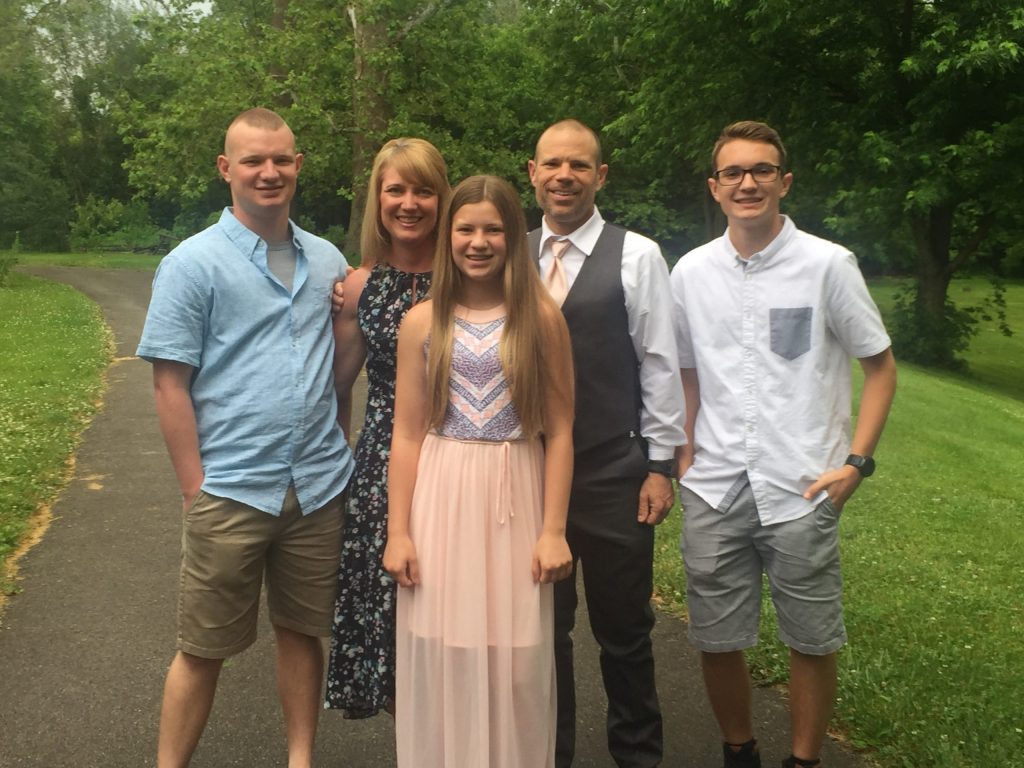 Photos provided by Sarah Ealey
The Ealey family; Clay, Sarah, Elaine, Earl and Gavin; are members of St. Aloysius Parish in Yoder, where the three siblings attended grade school before moving on to Bishop Luers High School in Fort Wayne. Gavin is currently in his second year at the University of Notre Dame and was recently honored with a scholarship for first-generation college students.

His faith has also been bolstered by the community spirit on campus. As a sophomore, Gavin stays active on campus at the university, participating in dorm activities, study groups and “a fulfilling faith life” which the university supports. He has attended Mass at many locations on campus – and experienced the celebration in many languages: French, Italian and even Chinese. “I will say I have grown in my faith life, but I wish I could be involved in more because there’s so much to do here. … I feel like there’s only so much I can capitalize on, but I’m grateful for the things I do capitalize on.”

Currently, he is pursuing a degree in chemistry, the subject he most connected with at Bishop Luers, with a minor in French. Future plans include either attending medical school and possibly working with an organization such as Doctors Without Borders or teaching chemistry at the college level.

His mother Sarah reminisced on Gavin’s formative years, recalling his early curiosity, eagerness to learn and willingness to put his new skills into practice. “He’s always been a really smart kid, but on top of that, he’s always had such a big heart,” she said. She related that he is the sort of person who is always willing to help and take care of others. “He loves a project; he’s that kid that wants to make everyone homemade Christmas gifts.”

She is proud of her three children and grateful for the Catholic education that they have benefitted from over the years, particularly the teachers and coaches that helped form their faith and character. “The kids grew so much in the Catholic faith as kids, going through the Catholic school system also. I felt like they had a good foundation.

“Clay is going to be graduating this spring and Gavin is not far behind. So, they’ll be the first in our family to accomplish a 4-year degree and get that college experience. So, we’re really proud.”

As a youth, Gavin participated in Pueri Cantores, which performed at the University of Notre Dame during his time in the choir. Sarah commented that it had an influence on him, stating, “He kind of always remembered that and he’s kind of in awe of the campus, so when it came time to apply, it was at the top of his list.”

With two sons in college, she admitted that it is “scary” for a parent to watch a child go out into the world, away from the faith and values in which they were raised. She was pleased that Gavin chose to go to Notre Dame. She remarked, “I felt like he would have all the opportunities there to pursue his faith.”

His determination helps him succeed in his life pursuits. “He does not see obstacles at all, he’s the kind of kid who says, ‘this is how it’s going to be, and I’ll do what I have to do,’” Sarah said.