Organized by the parish’s Seize the Faith committee and broadcast by Redeemer Radio, questions for “Catholic Questions Answered” were submitted online and answered live, along questions offered by the large outdoor audience. “Catholicism 101 mixed with some capstone course questions” is how emcee Sean McBride described the diverse topics that kept participants in their seats for almost two hours. 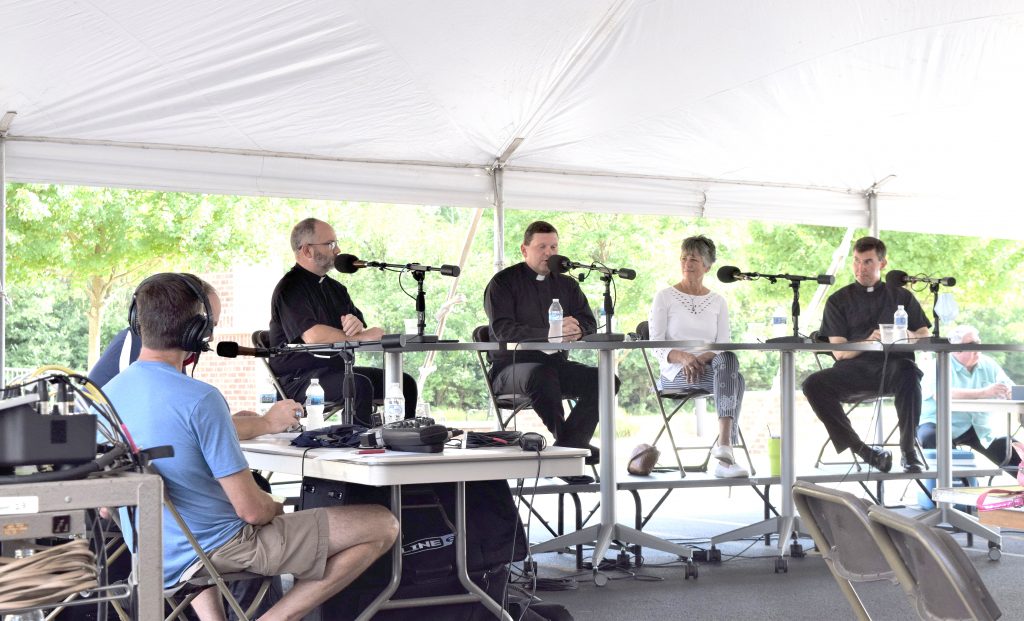 Fielding the diverse inquiries — including the small sampling below — were Father Mark Gurtner, pastor of Our Lady of Good Hope and the vicar general for the Diocese of Fort Wayne-South Bend; Meg Hanlon, chairman emeritus of the theology department for Bishop Luers High School, Fort Wayne; Father Andrew Budzinski, director of vocations for the diocese and pastor of St. John the Baptist Parish, Fort Wayne, and Father Daniel Scheidt, St. Vincent de Paul pastor.

Why does the Church have saints? Who are they? Are they really that big of a deal?

Am I still Catholic if I don’t agree with the pope on all things?

Father Gurtner: There are things popes have taught through the centuries that are absolutely essential to our faith; for example, the assumption of Mary, body and soul, into heaven. For a Catholic not to believe that puts themselves outside of the communion of the teachings of the Church.

Now there have also been examples of popes communicating things that aren’t essential to the faith — sometimes they’re merely prudential opinions by the pope. I’ll give you an example of that. Pope St. John XXIII, in his encyclical “Pacem in Terris,” said that there should be a one-world government. That was his prudential opinion, which Catholics should have a certain openness to hearing. But if one would disagree with the pope on that kind of thing, he would not be outside of the teaching of the Church because that was the pope’s prudential communication. He wasn’t communicating something essential to the faith.

What has been the evidence of helping foster a call to the priesthood of religious life in families?

Hanlon: The rosary. I heard it all the time: Every time the seminarians would come to Bishop Luers or Bishop Dwenger high schools and meet with the kids, so many of them would answer that question by saying, “We prayed. We prayed the family rosary.” It was huge.

Father Budzinski: Adoration — eucharistic adoration — is also huge. That was our experience here at St. Vincent’s, certainly with the Life Teen retreats: having involved priests who are present in the lives of the youth. Those are two big things.

We see on the international news and even some national news some of the churches being burned, statues being torn down and some religious persecution on the rise. As a Catholic Church, what’s our response? Do we have a response other than the rosary, prayer and Mass?

Father Scheidt: Father Andrew and I went on a vacation a little while back to London, England. We saw in the town of Oxford what some people did (in the face of an apocalypse, during World War II). They went to the Eagle and Child Pub every Tuesday, faithfully, and they socialized with good people. At the pub they brought the fruits of their creativity, of the good things that they invested in. They shared those with some of the people at that pub, for years: C. S. Lewis, J.R.R. Tolkien, others. These people carried Christian culture. C. S. Lewis also spoke over the radio bearing Christian witness during the apocalypse. Tolkien created a whole imaginative universe that supported what it is to be an ordinary human being.

I think that’s the call to holiness in this moment: How can we invest in what is authentically and basically human, the enjoyable things of life? Joy is the power of delighting in what is good. It doesn’t mean that we ignore the evil. But at a certain point we actually have to trust the fact that grace is here. If we can do that, we will not only survive, we will thrive.

Father Gurtner: You know, I’ve been contemplating this. There’s so much garbage going on. I really reflected on the fact that when we go to Mass, we have an opportunity, really not to — escape isn’t the right word — but we believe that in the Mass, heaven comes down to earth and earth goes up to heaven. So, we have a chance to be in our real home for a while. That gives us perspective for when we have to go back out into the world with all its problems.

We are in exile, because Christians are earthly. Life is an exile. Home is in heaven. When we celebrate the Mass, that could be a real refuge from what’s going on in our land of exile in the world. Just a great thing to keep in mind.

Meg Hanlon, I know you’ve dealt with kids for quite a long time, but have I failed as a parent if my young adult has left the faith? I’m told they’ll come back, but I don’t think these kids are like my generation. What can I do?

Hanlon: When I taught, I told that to the kids — I would say: ‘You know, your mother wants you to be in church. Your father loves you. It’s the most important thing.’ So, I can’t judge. Have you failed? Did you do your best? Did you do the best that you thought you could do? I’ve reflected a lot about my growing up compared to raising my children. The culture was far more friendly to raising faithful children when I was growing up than it is now. It’s harder. It is harder, but I’m sure that happened in lots of generations where it was harder. It was difficult. I tell parents: Pray for your child, never give up praying for them.

Father Budzinski: We hear that question all the time from parents: Have I failed as a parent because my child has fallen away from the faith?

The ultimate parent is God. He’s a father. I just want to say to the parent who might feel like a failure: Would we ever call God a failure, because His children turn away from Him? Never! So, you are not a failure. You have a new mission. You just described, Meg, how to go about that mission: through prayer and offering sacrifice.

Father Gurtner: The other thing I would add that’s important for people to understand is that it’s a long ballgame. One of the greatest explanations I’ve heard was about the weeds in the wheat, from Pope Benedict: that things that you think are weeds might turn out to be wheat, so don’t pull them up too soon. I think all of us priests have had the experience of reconciling people to the Father at almost that moment of their death. It could be they’ve been away from the Church for years and years and years, and it was because the seeds that were planted so many years ago by their parents in the Church didn’t bear fruit until that moment right before their death. You can ask every priest — we’ve done it many times over. So that’s the other thing that parents need to keep in mind, the consolation that it’s a long ballgame. But God the Father has them in view.

Hanlon: Can I follow up with one thing? Sometimes parents have not been faithful in the practice of their faith. Then they come to a great parish, come alive with the faith and want to start practicing it. But their children are looking at them like, “Why do you want to get to go to Mass now? We didn’t ever do that before.” My advice to parents who have caught the faith is to apologize to their children for not living up to their baptismal promises. An apology, especially to a teenager, is a very powerful thing. You don’t have to do some long explanation, just say, “You know what? Mom and I are sorry that we haven’t been faithful and raising you the way we should in this area, and so we’re going to start today.” Because anything else might sound hypocritical, but that would be a just a little piece of advice I would throw out there. 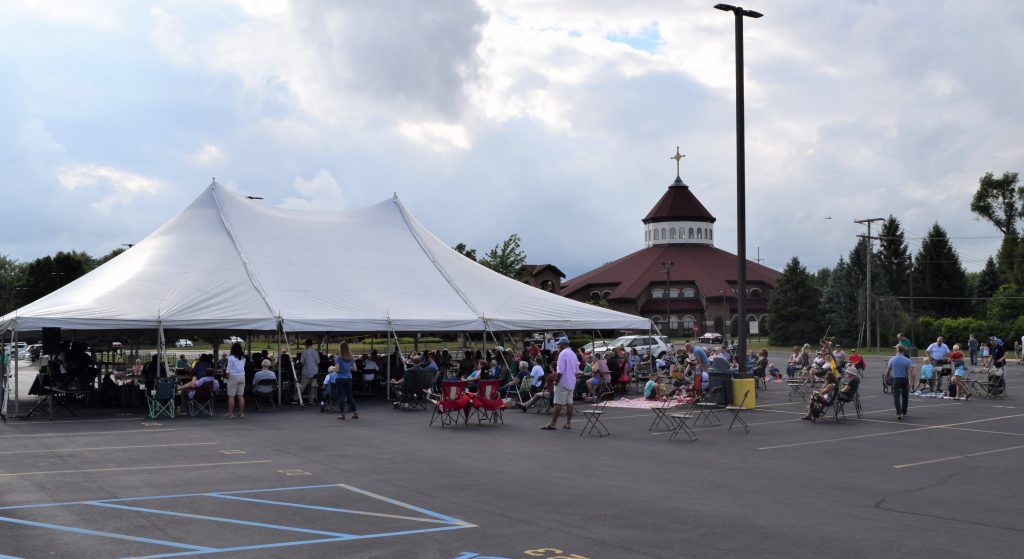 What’s the best way to know and follow your vocation?

Father Budzinski: I first went to Msgr. Galic, my predecessor as vocations director and a parish pastor for 20-some years at Holy Family, to talk about the possibility of being a priest, and I asked him that very question. The first thing he said was, receive the Eucharist as often as you can, because that’s Jesus Christ and you can’t go wrong with receiving Jesus frequently.

The second thing he said was, just simply abide in a relationship with the Holy Trinity through prayer. Live in the relationship. A lot of times we pray to know our vocations, and that’s actually not an entirely correct way to go about it. We shouldn’t pray to know our vocations; we should pray to know God — because God is not a means to an end. We can fall into the trap of treating God like the friend who has the lake house: “Oh, you have the answers to all my problems: I’ll be friends with you so I can get answers to my problems.” To which, if I can put words into Jesus’s mouth, would be, “No. How about if we just be friends? I’m not a means to an end. I am the end.” Of course, living in that relationship with Jesus will ultimately reveal things like what’s our vocation, and everything else.

I would say the third thing is talk to priests, if you’re thinking about narrowing it down to the priesthood. Spend time talking to priests and observing their life. If you are attracted to marriage, wear out the doormats of happy, healthy holy married couples and see how they do it. Fall in love with their life, so that you can aspire to that.