Queen of Angels Catholic School in Fort Wayne, under the leadership of principal Dennis Wiegmann, has made concerted efforts to reinvigorate the lifeblood of every Catholic school – its Catholic culture.

Michelle Meyer, in addition to teaching middle-school religion, is considered the religion specialist at Queen of Angels. It is her job and her passion to bring the program into its second school year. 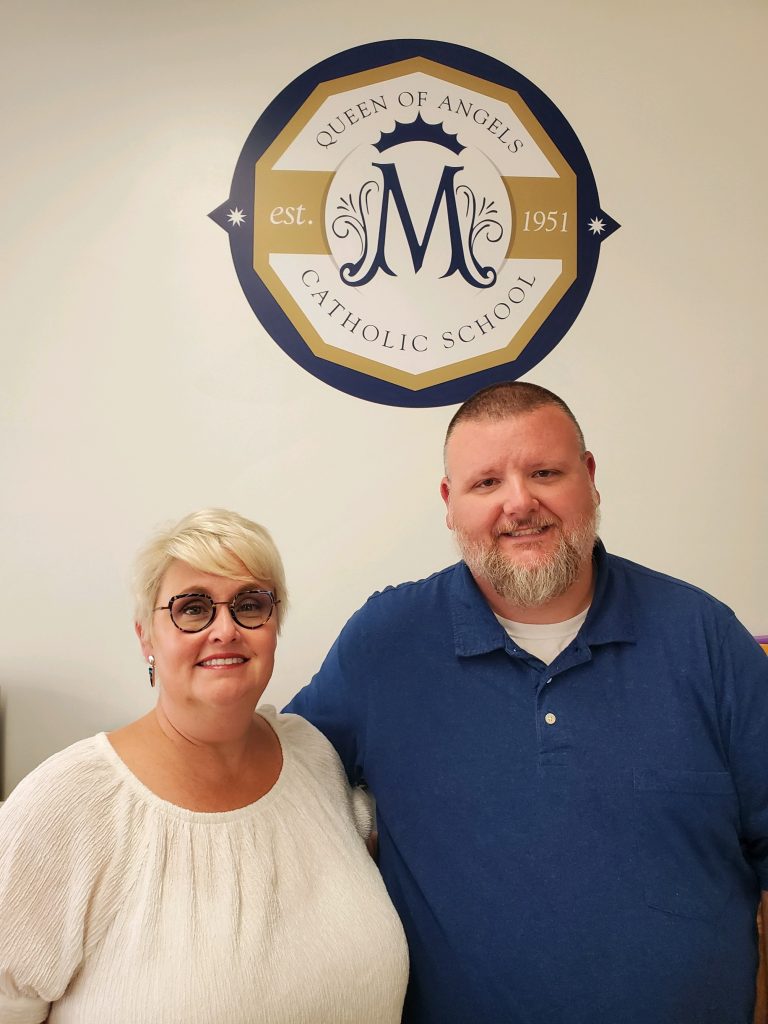 Introduced in lieu of other “special” classes, Catholic Identity presents the cardinal and theological virtues using Scripture passages, sacred art and music, and various other resources. Meyer admits that the monthly teaching guide, consisting of a 50-page PowerPoint presentation, may seem overwhelming, but teachers can “pick and choose pieces of it” to work into their lessons.

For the upcoming year, the Virtue = Strength program centers around Catholic practices and pieties that Meyer declared “will bring our Catholic identity to life for the kids.” In the first month, students will witness Queen of Angels pastor Father Zachary Barry blessing the school; during following months they will experience eucharistic processions, adoration and others.

Wiegmann believes Queen of Angels is the first school in the diocese to incorporate the Virtue = Strength program into the classroom. Working closely with Lou Judd, one of the program’s founders, they were able to tailor it for the school.

Oftentimes, Judd said he is told the program cannot be done in the classroom, but Wiegmann is adamant that it can. Having a dedicated teacher to adapt the material for individual grade levels and ardently present it to each class rather, than giving every teacher another task to accomplish is key, he said.

Virtue = Strength began as a ministry called SportsLeader. Its original goal was to help coaches incorporate the faith in the sports arena, and the athletic departments of several schools within the diocese partnered with the program. But Judd saw the program’s relevance beyond the athletic fields and wanted it to become more inclusive to groups outside that spectrum.

With the backing of Bishop Kevin C. Rhoades and the Catholic Schools Office, Judd hosted a Zoom meeting last spring to pitch the program to diocesan principals. Even before the meeting had ended, Wiegmann emailed Judd, requesting the program for Queen of Angels.

“I think one of our biggest assets at Queen of Angels is our Catholic identity, and the only way it can continue to thrive is to continue to evaluate it and work on it even more. Virtue = Strength took it to the next level,” Wiegmann said.

Judd stated that he “can’t praise Dennis and Michelle more” for their flexibility and drive to make the program work in the classroom.

“The students are learning their faith and loving it,” he commented. He is pleased by the positive stories he hears coming out of it. Parents, too, are growing in the faith through the weekly communications and resources Meyer sends home.

Judd calls the current situation in the Church “urgent,” pointing to statistics that show 85% of Catholic college students fall away from the faith in their first semester of college.

“Parents say that (their children) get religion class, but that’s only 45 minutes a day,” Judd stressed. “If that’s all we’re doing, those statistics are going to get worse.” Students, he believes, “should be choosing to love our Lord for the rest of their life.”

His hope is that the Virtue = Strength program will spread throughout the diocese. Currently, around 15 schools are participating, mostly through athletic departments. He often cites Queen of Angels as an example for how other schools can incorporate the program into their academics, hoping it gives young Catholics one additional reason to remain in the faith.

Looking at his own life, Judd recognizes the influence an adult mentor outside of the family can have on a young person’s faith.

“The more enthusiasm and passion and love you can show for this can be a powerful moment for evangelization.”

Embracing their Catholic identity goes beyond adding a half-hour class at Queen of Angels. As religion specialist, Meyer also collaborates with the other teachers to help boost the students’ knowledge of the faith early on and reinforce some of the more difficult concepts of Catholicism.

“I like that we’re setting the bar here and we’re having the kids rise up to our expectations, rather than coming in at their level and just kind of spoon-feeding them stuff they already know,” she said. “I like that we’re challenging them and giving them harder concepts, but truthful concepts.”

“You can’t be afraid to build the child’s capacity for learning. They can learn that big word, but use a different synonym for it when you start,” Wiegmann added. “But keep telling them, ‘This is the word, but it means this.’ If you continue to teach it, they’ll know it. That’s how we better catechize our kids.”

Meyer, too, emphasized the need for good catechism in young students’ life to help them retain their faith throughout their lives.

“The big concepts are our truth. They’re the ultimate black-and-white; there is absolute truth, and there is God … that’s kind of a cool thing, to keep them grounded and rooted in the reality and hope of our eternal salvation.”