WASHINGTON (CNS) — As the Catholic Church in the U.S. began observing National Migration Week, a time to reflect on the circumstances confronting migrants, immigrants, refugees, and human trafficking victims, the administration of President Donald Trump announced that it would end an immigration program for thousands of Salvadorans, one of the largest groups of modern-day immigrants in the country and one that includes many Catholics.

More than 200,000 Salvadorans, living under a special immigration status in the U.S., now face the prospect of staying in the country illegally or returning to a nation designated as one of the most dangerous in the world not at war, after the U.S. Department of Homeland Security announced Jan. 8 that it was ending a provision called Temporary Protected Status after Sept. 9, 2019.

“The decision to terminate TPS for El Salvador was made after a review of the disaster-related conditions upon which the country’s original designation was based,” DHS said in a statement. Salvadorans affected can apply to stay under a different program, if they qualify, or make plans to return to their home country, the statement continued.

Citizens of El Salvador were able to apply for TPS in 2001 after the Central American nation experienced a series of major earthquakes. TPS grants a work permit and a reprieve from deportation to certain people whose countries have experienced natural disasters, armed conflicts or exceptional situations, to remain temporarily in the United States. El Salvador had previously received the designation in 1990 after thousands of Salvadorans fled to the U.S. seeking refuge from a brutal civil war.

Supporters of the Salvadorans said current TPS recipients should be allowed to stay because they have built families and are firmly rooted in the U.S.and local faith communities.

Catholic bishops and organizations have expressed concern that Salvadorans would be forced to return to a socially unstable country that is ravaged by gangs and has been designated by various organizations as one of the most dangerous places in the world and one not equipped to absorb such a large-scale repatriation.

“From our experience working with the Catholic Church and other local partners in El Salvador, the Salvadoran government does not have adequate humanitarian capacity to receive, protect, or integrate back into society safely this many people,” said Catholic Relief Services in a statement released shortly after the decision was announced.

Dylan Corbett, executive director of the Texas-based Hope Border Institute, said the administration’s decision would instead create an additional 200,000 “soon-to-be undocumented immigrants” in the U.S.

“Today, the Trump administration unnecessarily and cruelly put the security, safety, families and lives of over 200,000 Salvadoran TPS recipients, including over 35,000 in Texas, in jeopardy. Deporting them will mean uprooting and destroying families and livelihoods and sending families back to poverty and violence in one of the most dangerous and volatile regions of the world,” Corbett said. “And make no mistake, we as Americans through our trade and security policies, and because of our insatiable appetite for drugs, are morally implicated in the crisis in El Salvador and Central America.”

Recalling the words of Pope Francis, Corbett said building walls, detaining human beings and “deporting our Salvadoran sisters and brothers is just another example of how the Trump administration is stirring up ‘primal fears’ for political advantage.”

A big concern for Catholic organizations and leaders is the 192,000 U.S.-born children of Salvadoran families.

“This is yet another ill-conceived decision by an administration that ignores the immense contributions to our country by immigrants and that has lost sight of the United States’ long history as a safe haven for people who flee danger abroad,” said Bishop Kevin W. Vann of Orange, California, chairman of the board of the Maryland-based Catholic Legal Immigration Network, Inc.

“By terminating TPS for El Salvador, hundreds of thousands of people, including U.S. citizen children and extended family, will be faced with wrenching decisions about how to proceed with their lives,” Bishop Vann said. “The administration fails to address how it makes the United States any safer to expel people who have been living and working legally as valued residents of our country. Instead of withdrawing their protections, our government should welcome these long-term, settled members of our communities and find ways to give them a permanent path to residency.”

In a statement, Bishop Joe S. Vasquez of Austin, Texas, chairman of the U.S. Conference of Catholic Bishops; Committee on Migration, said the administration’s decision was “heartbreaking.”

“We believe that God has called us to care for the foreigner and the marginalized … Our nation must not turn its back on TPS recipients and their families; they too are children of God,” he said in a statement.

While urging Congress to find a solution, Bishop Vasquez said the USCCB stands in solidarity with Salvadoran TPS recipients and that the bishops would continue to pray for them, their families, “and all those who are displaced or forced to flee from their homes.”

The Center for Migration Studies in New York said 88 percent of Salvadoran TPS beneficiaries are employed, many are homeowners, and typically have lived in the U.S. for 21 years. Returning them to El Salvador would be “destabilizing,” said Donald Kerwin, the center’s executive director, said in a statement. 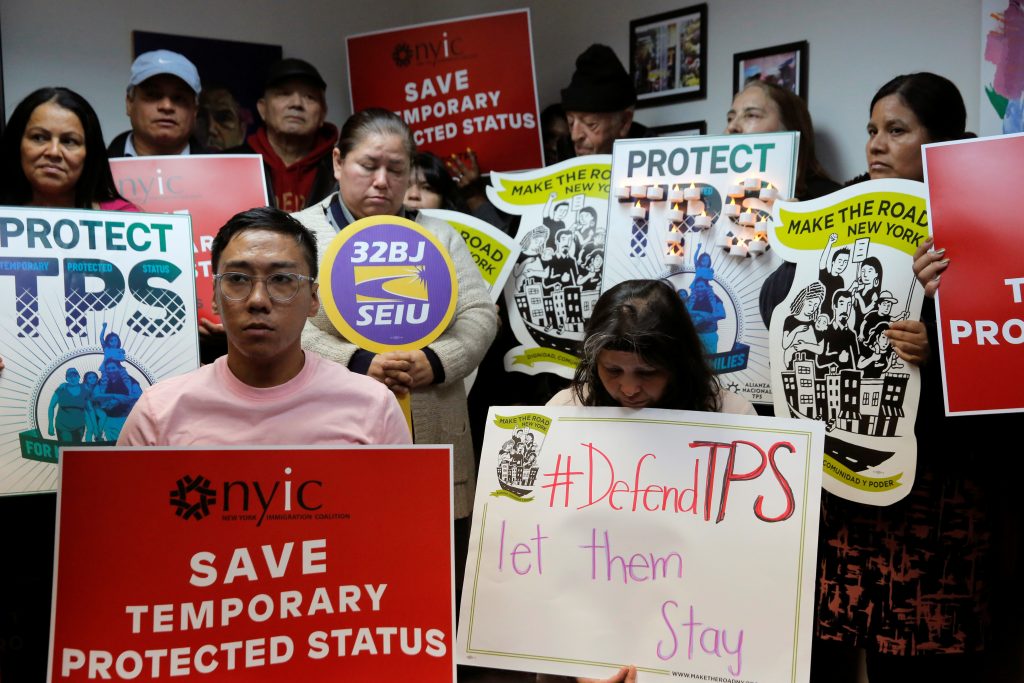 “Today’s decision creates many losers, and no winners,” he said. “The losers include the TPS recipients themselves, their employers, their U.S. citizen children, their U.S. communities, El Salvador, and the U.S. economy. The rule of law is another loser as the decision will relegate hard working legal immigrants into persons without status and force TPS beneficiaries and their U.S. children to return to violence-plagued communities without good economic prospects.”

Ricardo Calderon, of the Central American Resource Center in San Francisco, told Catholic News Service that the affected Salvadorans have suffered what amounts to “psychological torture” while waiting for the administration’s decision.

Many have felt anger, worry, uncertainty, wondering what will happen to their children and to their family members abroad who depend on them. Some are scrambling to understand the decision since there is so much misinformation, he said.

Though the conditions that led to the TPS designation may have improved in El Salvador, it makes no sense to ignore the conditions that continue to plague the country and which seem daunting to those who are facing them: lack of jobs, rampant crime, and a long list of social ills, Calderon added.

“We have become familiar with the reality of Salvadoran TPS holders through the stories of individuals in our Ignatian network,” the organization said in a statement. “These women and men of all ages — whom we know as students, teachers, colleagues, parishioners — are faced with a future of uncertainty and grave risk for themselves and their families as they contemplate a return to the violence and impunity in El Salvador.”