Saying their organizations are “a game-changer,” Sister Carol Keehan, a longtime advocate for health care and those in need, encouraged leaders of Catholic foundations to begin with respecting the dignity of every person as they apply Catholic social teaching to their work.

“You have very challenging positions with great responsibility and immense potential to do good,” said Sister Carol, the president and CEO of the Catholic Health Association of the United States in Washington, D.C. She spoke during the opening day of the Assembly of Catholic Foundations Conference held April 10-12 in Fort Wayne and Huntington. 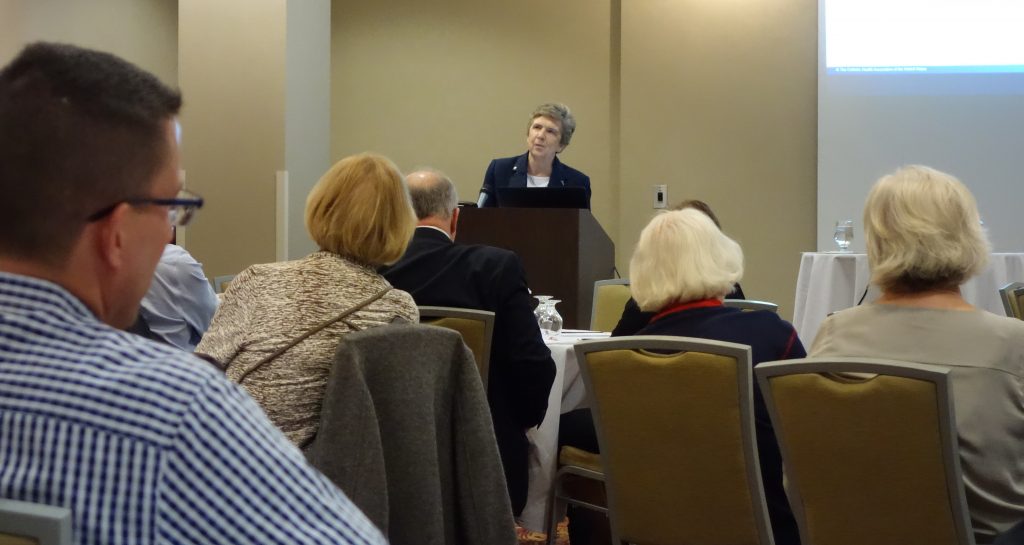 Sister Carol Keehan, president and CEO of the Catholic Health Association of the United States in Washington, D.C., speaks during the opening session of the Assembly of Catholic Foundations Conference held April 10-12 in Fort Wayne and Huntington. — Kevin Kilbane

The assembly consisted of a group of Catholic foundations, many of which were formed with the proceeds after a congregation of Catholic religious women sold one or more of its hospitals, said Meg Distler, executive director of the St. Joseph Community Health Foundation in Fort Wayne. The foundation Distler leads was created in 1998 when the Poor Handmaids of Jesus Christ religious order based in Donaldson sold St. Joseph Hospital in Fort Wayne.

The foundations function somewhat like venture capital funds, Distler said, by investing in programs and organizations that carry on the mission of their sponsoring religious order.

“These foundations exist to be the sequel to the ‘Good Samaritan’ story,” Susanna Krey, president of the Sisters of Charity Foundation of Cleveland, said following the afternoon sessions April 10. 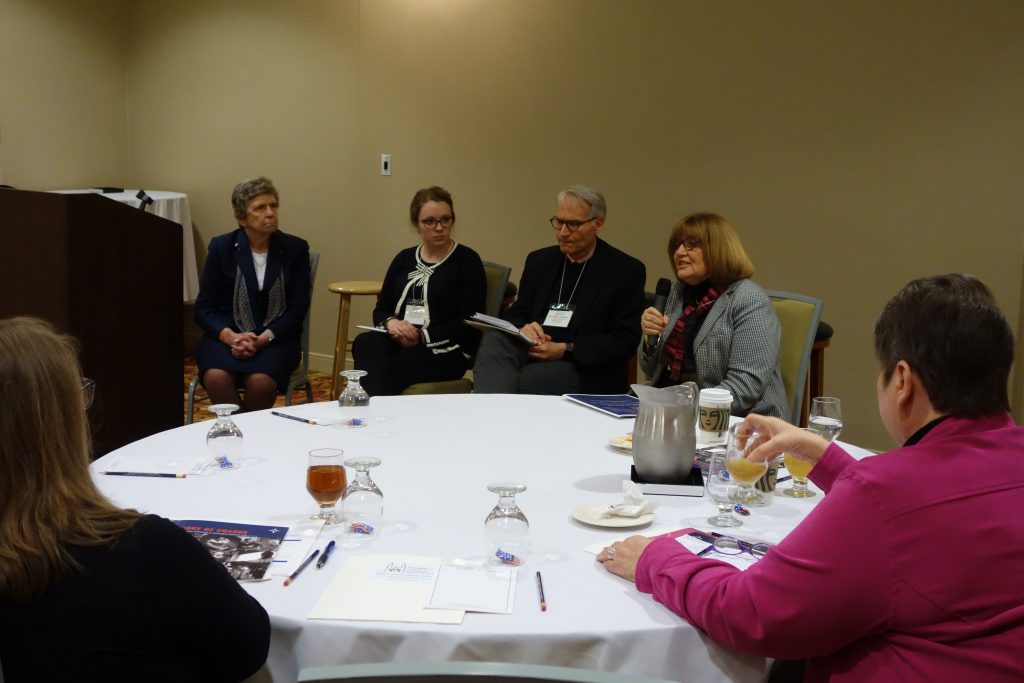 Susanna Krey, right, speaks during a panel discussion at the opening afternoon of the Assembly of Catholic Foundations Conference, held April 10-12 in Fort Wayne and Huntington. Joining Krey, president of the Sisters of Charity Foundation of Cleveland, were, from left, moderator Sister Carol Keehan, president and CEO of the Catholic Health Association of the United States in Washington, D.C.; Erin Clark-Lupo, director of mission affirmation for the Poor Handmaids of Jesus Christ religious order in Donaldson; and David Johnson, board chairman of the St. Joseph Community Health Foundation in Fort Wayne. — Kevin Kilbane

Staff and board members from 16 foundations were in attendance at the conference, which was based at the Hilton Hotel in Fort Wayne. In addition to Catholic social teaching, the workshops and information sessions explored cultivating holiness and prayer, engaging members of the millennial generation and successful initiatives members have funded.

The April 11 sessions took place at St. Felix Catholic Center in Huntington and included an address on “Cultivating Holiness and Wholeness” by Carolyn Woo, former CEO of Catholic Relief Services. Woo now is a Distinguished President’s Fellow for Global Development at Purdue University in West Lafayette.

The conference schedule also included a welcoming Mass at 6 p.m. April 10 in the Cathedral of the Immaculate Conception, celebrated by Bishop Kevin C. Rhoades.

In his homily, Bishop Rhoades told the group that freedom from sin results from faithfulness to God’s law and giving of oneself to God and others.

“This gets to the heart of your service of the charitable mission of the Church,” the bishop said. “We are called to share in the grace and the responsibility of the Son of man who came not to be served, but to serve, and to give His life as a ransom for many.”

During her address, Sister Carol said Catholic social teaching stresses the dignity of every person and that, since we all are brothers and sisters, those who have more than they need should give the excess to those who don’t have enough, because it really belongs to them.

Catholic teaching also calls foundation leaders to be good stewards of the money they manage and to give their staffs and the people they serve the opportunity to be as self-sustaining as possible.

Understanding and applying Catholic social teaching is an intentional, lifelong journey that involves ongoing learning and reflection, said Sister Carol, who in 2010 was named one of Time magazine’s 100 Most Influential People in the World for her work advocating for the needy, promoting respect for human dignity and reforming health care. She urged foundation officials to act with transparency and accountability in all their organization does and to expect the same from recipients of their funds.

Sister Carol also encouraged foundation leaders to learn from predecessors who have helped people in poverty, such as St. Mother Teresa, St. Vincent and U.S. journalist and reformer Dorothy Day.

“If you make a mistake trying to help,” Sister Carol said, “that is the easiest mistake to fix.”

Clark-Lupo joked about possibly being the only millennial in the room and about some of her age group’s quirks, but noted, “I think one of the soft spots we have is Catholic social teaching.”

While millennials may want fancy coffee, they also want to know who grew it, what treatment and pay workers received, whether those workers have the right to vote and how far the coffee had to travel to get here, she said.

“We are looking for transparency,” she added, saying millennials want to know that even a small donation will be used wisely.

Another topic the panel and audience discussed was socially responsible investing as a way to carry out Catholic social teaching. This investment strategy values positive impact on people and the environment over high financial return.

A participant also asked how to approach situations where policy makers’ plans conflict with a foundation’s work and its efforts to “give voice to the voiceless,” such as with current U.S. immigration policy.

“One of the great roles we have is, we don’t give in to bitterness,” Sister Carol said. “… But we can take steps, one person by one person, family by family, to make the world better.”

Leaders of three Catholic foundations sat down after the opening afternoon of the Assembly of Catholic Foundations Conference to discuss their missions and work. 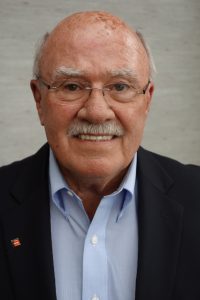 John Tippmann Sr. created the foundation in 1989 in honor of his mother, the late Mary Cross Tippmann. Her values guide the work of the foundation, which has assets of more than $100 million.

Tippmann said his parents, who raised 16 children of their own and one foster child, believed strongly in Catholic education, so that is a key area the foundation supports. He also believes Catholic young people benefit from being in an environment with other Catholics.

His parents were very pro-life, so the foundation helps fund five right-to-life organizations. The foundation also tries to help the poor around the world.

“The issues we work to address as Catholic foundations can seem insurmountable in scale and complexity,” Cheryl Chalfant, Mary Cross Tippmann Foundation executive director, added. “Our challenge is to respond with relentless compassion and love to serve the poor and marginalized, to honor the dignity of human life, and to act as the hands and feet of Christ.” 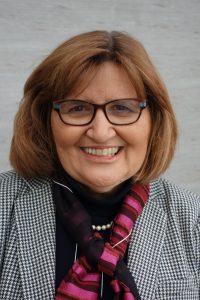 The foundation works to increase the community’s capacity to improve the lives of people in need, especially in Cleveland’s Central Neighborhood, Susanna Krey, foundation president, said. The Sisters of Charity of St. Augustine religious order owned a hospital in that neighborhood, and its sale in 1996 contributed to the creation of the foundation, which now has assets of more than $80 million.

“We take a bold goal and stick to it,” she noted, saying the foundation has worked on homelessness for 20 years. It and its partners now have nearly eliminated chronic homelessness in Cuyahoga County, where Cleveland is located, by providing permanent housing for people who have been homeless for at least a year.

The Generative Spirit program, a collaboration with the Conrad N. Hilton Foundation, seeks to build relationships between Catholic sisters and lay people, especially young adults. With many religious sisters in or approaching retirement, foundation officials hope lay people will carry on the social justice work of the sisters’ organizations.

“When they work with those on the margins, they are right there with them,” she said. “The ultimate respect of working with someone is to listen. You come to a deeper understanding of what the issues are.” 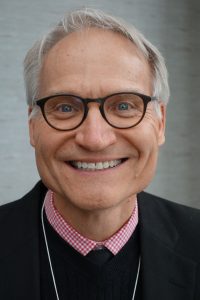 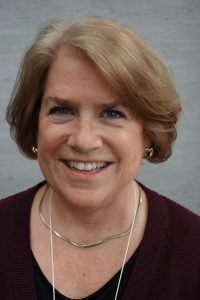 The foundation remains guided by the values of the Poor Handmaids of Jesus Christ religious order, which started its ministry in Fort Wayne 151 years ago by founding a hospital, according to Meg Distler, foundation executive director. The sisters’ 1998 sale of St. Joseph Hospital in Fort Wayne led to creation of the foundation, which has assets of $38 million or more.

How the foundation approaches its work has evolved from mainly giving grants that fund programs to devoting about 40 percent of its grants to strengthening partner organizations so they can better do their work in the community, Distler said.