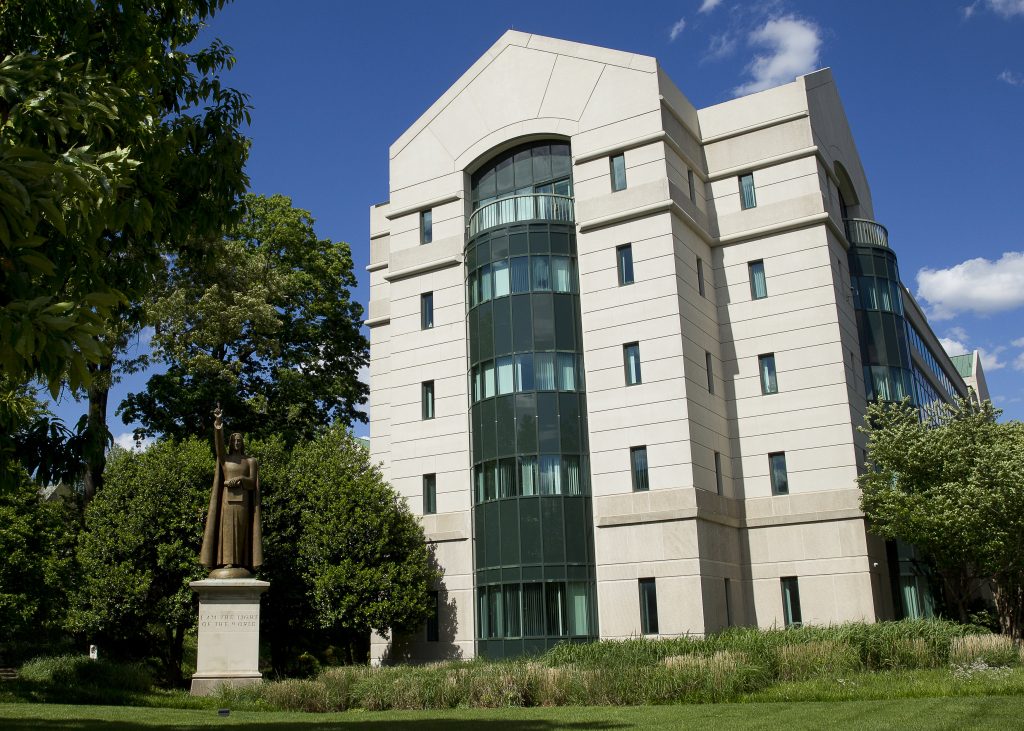 The U.S. Conference of Catholic Bishops building in seen in Washington May 8. — CNS photo/Tyler Orsburn

The message remains, but mediums must change

The chief communications officer for the U.S. Conference of Catholic Bishops’ Department of Communications announced earlier in May a restructuring that will shift the focus of its operation from a traditional print structure to a digital model.

“It’s an exercise in enculturation,” said James Rogers, USCCB chief communications officer. “If you’re going to evangelize, you need to reach people where they are.”
The communications department was built when print and newspapers were the dominant force in media. The landscape has been dramatically transitioning in recent years to a digital platform, where information is frequently sought and shared in real time, Rogers told Catholic News Service May 8.

Though print content will continue to be generated, more resources will be directed toward visual media, digital content and social media dissemination, Rogers said.
The restructuring involves the elimination of 12 jobs and the creation of 10 new positions.

Employees whose jobs were eliminated will be considered for the newly created positions if they have the required skills to do the work, Rogers said.

Planning for the restructuring began in 2014 with the commission of two different studies from independent communications consulting groups.

The consultants were charged with examining the department’s operation and recommending how to best reach the USCCB’s targeted audiences.

The only area not directly impacted by the communications restructuring was Catholic News Service, which will retain its current staff and remain editorially independent of the USCCB.

“A part of the review was to look at the position of Catholic News Service within, for the lack of a better word, the space of the dialogue that takes place,” Rogers said. “Catholic News Service is very well-respected. When we did the survey of clients and customers, we found its position of trust is on par with, or higher than that of any other Catholic news outlet that you could compare CNS to.

“The reason you are not seeing change, in terms of the core structure of Catholic News Service, is because of the tremendous content creation capacity that is there,” he said. “It’s a well-respected, well-known brand.”
The challenge for CNS is that “people tie it to channels and since it was born as a print wire service,” they don’t necessarily associate it with the digital content it produces, such as video, its multimedia offerings, or its social media endeavors in breaking Catholic news, Rogers said.

“So, we’re making changes to the marketing structure of CNS,” he said, “because the content is there. The key is raising the awareness among those who would be interested in that content.”

In addition to retooling how the communications department markets CNS, the reorganization also will build a dedicated digital team and provide episcopal resources to help bishops throughout the U.S. share national and international news of the church to their audiences.

The marketing team is being renamed Marketing and Episcopal Resources with specialists who will focus on web development, digital media, graphic design, marketing, sales, distribution and content coordination.
The creative services team also will develop multimedia content using elements of graphics, video and writing.
Outside vendors and freelancers will be brought in for ongoing opinion research, as well as creative and content development, so that the USCCB can stay in tune with how the world is receiving its information, Rogers said.
Calling the restructuring a “repurposing of resources and not a retrenchment,” Rogers acknowledged some displaced employees will not meet the requirements for the newly created positions and will ultimately lose their employment at the USCCB.

The independent consultants called their study a “clean-slate” approach, requiring the USCCB to look at the challenges it faces, develop the best structure to meet those challenges, “and that work was done without regard for the current structure within communications at the (USCCB),” he said. “It was based on positions and not people.”

It was done that way to make sure the leadership was focused on the outcome and concentrated on where the communications efforts needed to be, Rogers said.

Quebec cardinal to Catholic media: Strength of the message is God

St. John’s experience with Jesus “transforms him into a great communicator,” said Quebec Cardinal Gerald Lacroix, and he told Catholic media professionals from around the world that the same kind of experience drives their work.

“The strength, the vigor is … in the seed, in the Word of God,” he told hundreds of participants in the Catholic Media Conference and the Signis World Congress June 21.

In a special Mass at the Cathedral-Basilica of Notre Dame of Quebec, the cardinal moved smoothly among Spanish, English and French, asking participants from the Americas, Asia, Africa, Australia and Europe to pardon his hoarse voice.

Referring to one of the Mass readings, he said St. John “shares a vibrant expression of his faith.” He noted that, at the time, there was “no Facebook account yet, no tweets … no internet … and yet the Gospel spread all over the world.”

Of course, he told the media professionals, they should continue to try to use the professional tools and to make themselves the best they could be.

But he repeated, “We do not forget that the power, the strength, the life is in the seed, the Word of God.”
The Signis World Congress met June 19-22 in Quebec, drawing members of the international association of Catholic communicators.

The Catholic Media Conference met June 20-23 for members of the Catholic Press Association of the United States and Canada. — CNS