When it comes to dating, an official “rule book” doesn’t exist. In fact, as the world changes, with communication and human relationships being continually redefined, how to date becomes increasingly more confusing. The constant barrage of social media and cultural platforms offer so much “advice” that it’s difficult to know how to have dating relationships that are stable, intentional and life-giving.

While not always understood or taught clearly, the traditional Catholic approach to dating involves looking toward getting married in the Church as the end goal. From this perspective, decisions are often made very differently than in relationships where the focus is more on the immediate moment or that proceed without a clear understanding of where things are meant to culminate. 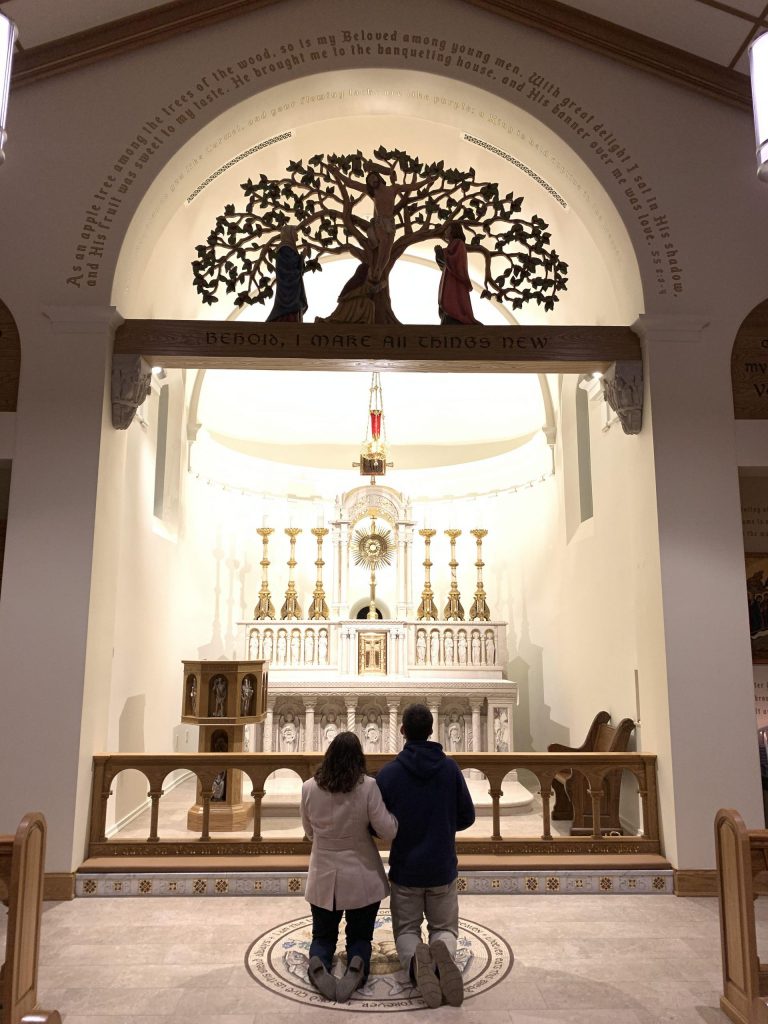 Cassidy Klinker
Lindsay Klinker and Christopher Lushis of St. Vincent de Paul Parish, Fort Wayne, adore the Lord in the Eucharist at The Oratory of St. Mary Magdalene while they were dating earlier this winter. The couple believed that dating with the end result in mind – determining if the other is a person with whom they could grow in faith during a lifetime of marriage — was the holy way to proceed with their relationship. They are now engaged.

Catholic dating couples focus on building their faith through participation in the sacraments, since their eventual marital union is itself a sacrament in which they themselves are the primary ministers. They also pray together, following the moral and spiritual guidelines of the Church, and share their desires for ultimate vocational joy. In living out this process, both people often find that they have deeper intimacy and communication, greater fulfillment — both as individuals and together in relationship — and that they are better strengthened to live in committed service to one another.

Lindsay Klinker of Fort Wayne, who is currently engaged, shared: “Regularly spending time in prayer together has kept God as the primary focus of our relationship. Often this time in prayer, whether silent or shared, has been a great source of intimacy for us. There is a deeper connection that happens between us, even when we’re praying separately. But also, when we’re sharing our hearts with God, it naturally leads us to share our hearts more easily with one another.” 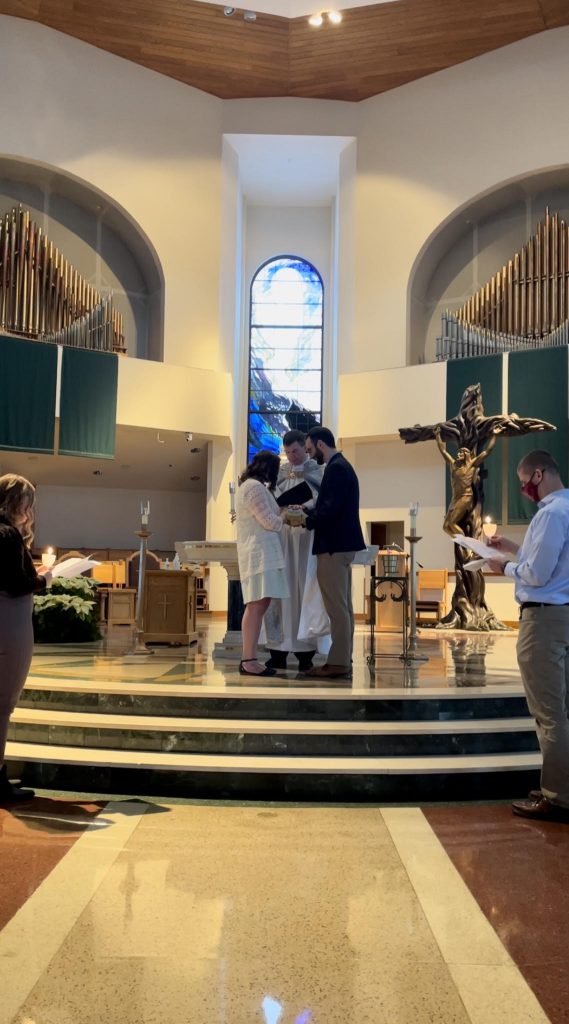 Klinker and Lushis participate in the traditional Catholic Rite of Betrothal at St. Vincent de Paul Parish, Fort Wayne, Feb. 11, as pastor Father Daniel Scheidt prays over their hands, which are wrapped in his clerical stole. In the ceremony, which customarily occurs after an engagement takes place, the individuals publicly declare before God their intention to enter into marriage. While not irrevocable, it is a binding promise of commitment that includes a blessing of the engagement ring and a formal announcement from the Church that the couple is formally betrothed.

Chelsea Huff, who was recently married at Klinker’s parish of St. Vincent de Paul, added, “As you’re studying and learning the Gospel, which gives you something to talk about together, you are also led us to consider real life issues and situations — those that really matter. By talking through these kinds of scenarios in our relationship, it helped us with our ability to communicate.”

Her husband Ted shared that when they began dating, “I had to make a choice up front if I was going to come back into the Church and be more serious about it. It was a hinderance for me initially, but it allowed me to say from the beginning, ‘I’m not going to make a partial commitment. If I’m going to do this, it’s going to be serious because I know there’s more at play here. I need to have a faith transformation.’ And as our relationship grew, there was a lot more thought and faith involved in it.”

Chelsea added that having the conversations Catholic marriage preparation encourages couples to have “helps you prepare yourself for the future you don’t even know you have yet.”

Catholics couples who are dating are asked to trust the wisdom of the Church as it refers to physical intimacy and living situations. Couples find that a Catholic approach to physical intimacy allows them to both share and receive love from their significant other in a way that safeguards their emotions and allows them to clearly discern the relationship they are in.

“The boundaries established by Catholic moral teaching really protect your heart and allows for clarity in dating and determining whether the person you are dating is who you are meant to marry,” Klinker said. “You don’t have to wonder if the other person’s actions match their intentions, and you’re protected from unintentionally lying with your actions as well.

“Making a lifelong decision is hard without the added complication of physical attachment to another person. Catholic moral teaching helps you to discern the future with a clear mind and heart,” she added.

Trey and Kate Sorg, recently married at St. Stanislaus Bishop and Martyr Parish, South Bend, took this a step further, saying, “Catholics are not Puritans. There is a proper time and place for affection, time spent together and increased intimacy through talking and silence. Yes, even silence. The Church prescribes these ideas so as to aid people in their discernment of the person they are dating so the couple may not only stay together for the entirety of their shared life, but that their life is one of happiness and joy.

“As we share in a common life together, there will be certainly be moments which are heavenly, but also those which are Calvary-esque,” he said. “But as Fulton Sheen described, we see that it takes ‘three to be married’ as we enter into this sacramental union with the aim, through the help of God, to love supernaturally.”

Through a Catholic approach to dating, men and women are challenged to love through self-gift – realizing it is not primarily about yourself as an individual. As Vatican II’s Gadium et Spes states, “Man cannot fully find himself, except through a sincere gift of himself.” In light of this, the Sorgs said, “It is this manner of love to which all Catholic couples are called, and the more we perfect the gift of ourselves for the sake of the other, the more God will bless this marriage and our family together will become sanctified.”

But practically speaking, dating and marriage are not always easy. To self-sacrifice for one’s beloved is a natural desire, but it takes supernatural assistance to live out on a daily basis.

To have a Christ-centered relationship, consider attending Mass at least weekly and pray together. Go to confession regularly. Share prayer intentions with one another. Read Sacred Scripture and share reflections. Sit together in prayerful silence, in a chapel or in a dedicated space of a home. Have conversations about the faith, about what each person believes, about the longings and desires of their hearts, how they primarily give and receive love – the “Five Love Languages” is a very useful guide – and how they would hope to eventually function together as a family. Recommended reading is a critical review of the documents of the Church on marriage and family together, primarily “Casti Connubii” by Pope Pius XI, “Familiaris Consortsio” by Pope John Paul II and “Amoris Laetitia” by Pope Francis. Reflect upon Fulton Sheen’s “Three to Get Married,” watched the “Beloved” series on Formed.com and prayerfully read, practice and consider, prior to marriage, what is being promised in Catholic wedding vows.

While discussions and documents are helpful, the theoretical becomes much more practical when seen lived out firsthand. Therefore, it is often of greatest value to seek out the wisdom of holy married couples and learn how they went about dating, how they endured difficult moments, what they learned, advice they recommend and how they seek to embody their Catholic faith as a family.