Colleges and universities across the country sustained heavy financial losses after they sent students home midway through spring semester to prevent the spread of the COVID-19 virus.

For most schools, the biggest losses involved refunding room-and-board fees to students for the months they couldn’t live in campus housing. Projected budget shortfalls at Catholic colleges included $50 million or more at both Georgetown University in Washington, D.C., and Loyola University in Chicago, news reports said.

Catholic colleges and universities in the Diocese of Fort Wayne-South Bend remain financially stable but cautious as they plan to resume classes this fall.

“It’s going to be a little tricky until we see our enrollment,” said Sister M. Elise Kriss, president of University of Saint Francis in Fort Wayne. The university serves about 2,200 students at campuses in Fort Wayne and Crown Point.

The American Council on Education’s Pulse Point survey in May showed 80% of presidents at public and private colleges and universities who responded to the survey expected their school’s revenue to decrease for the 2020-21 academic year.

At least two-thirds of the presidents also expected their schools to experience an enrollment drop for the coming year. Pulse Point surveys offer a moment-in-time glimpse of college and university presidents’ views on COVID-19’s effect on their schools.

Here’s what Catholic colleges in the local diocese had to say.

Ancilla, in Donaldson, offers two-year degrees. The school is scheduled to receive about $492,100 in federal Coronavirus Aid, Relief and Economic Security Act funding. Half of that total, or about $246,000, already has been refunded to qualifying students to cover their costs of finishing the semester at home because of the COVID-19 pandemic, said Sister Michele Dvorak, PHJC, Ancilla’s president.

The college plans to use the remaining $246,000 to address COVID-19 prevention on campus, Sister Michele said. That will include installing motion-activated lighting in restrooms so students and staff don’t have to touch light switches. The college also intends to open a wellness office staffed by nurses, including some of its licensed practical nursing students.

Ancilla expects student enrollment to remain good this fall, she said. The number of students may be down slightly, she added, but it’s too early to know for sure. 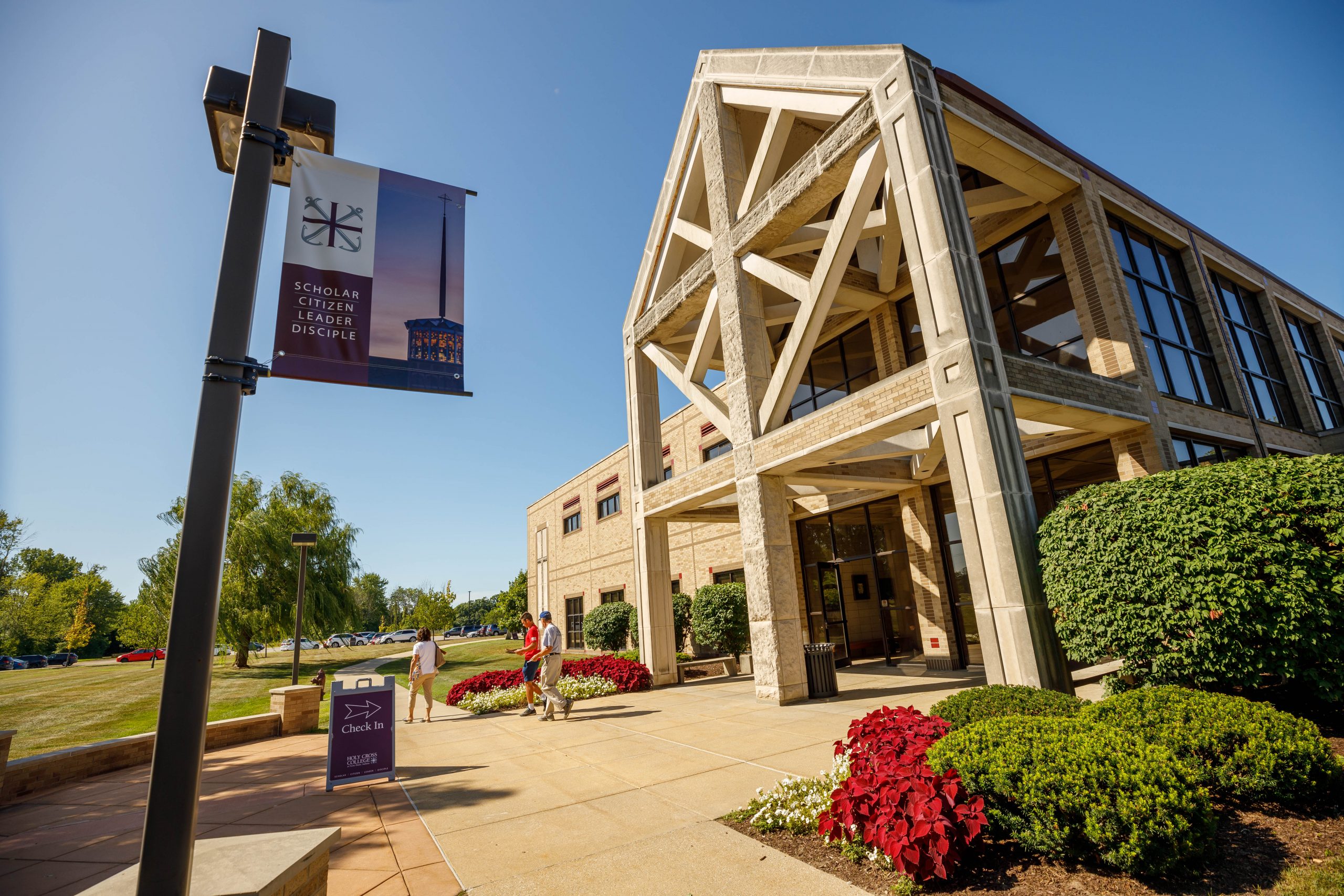 Holy Cross College, Notre Dame, entered the COVID-19 pandemic in a strong position that allowed it to use some of its own funds to help students with costs associated with going home midway through spring semester and finishing classes online.

“One example of this is that we have been able, from our own funds, to augment the federal emergency assistance dollars that go to students,” Griffin said.

Holy Cross is slated to receive nearly $469,600 in CARES Act funds, with at least about $234,800 going to its 500 undergraduate students. By adding its own money, the college disbursed a total of nearly $500,000 to students, including some not eligible for help under CARES Act rules.

Griffin attributes the college’s solid status to the leadership and financial health inspired by Father David Tyson, CSC, who became president in 2017. Holy Cross also benefits from being part of a tri-campus community with University of Notre Dame and Saint Mary’s College.

“Moreover, we are not seeing any indication of students wavering in their decision to attend college in the time of COVID,” he added. “In fact, we are right now offering more scholarships to local families who maybe would like to have their son or daughter in a Catholic school closer to home.” 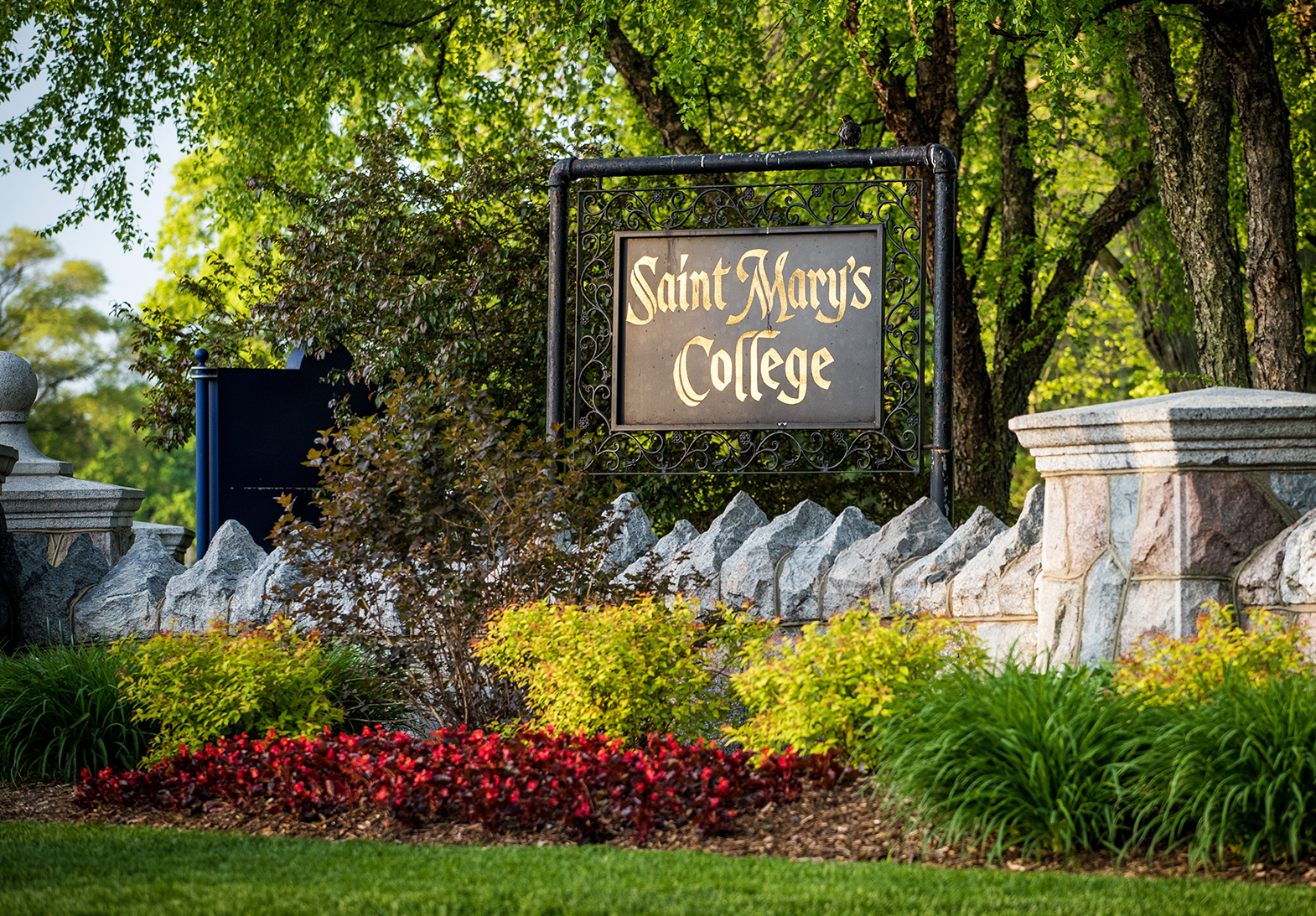 Saint Mary’s College has remained strong financially through the COVID-19 pandemic. However, school officials have instituted cost-saving measures as a precaution in case a resurgence of the virus disrupts plans for students to return to campus for the fall semester.

Saint Mary’s came into the pandemic in a stronger financial position than many colleges, said Dana Strait, the college’s vice president for strategy and finance. It has a healthy endowment built up over many years and has minimal debt.

That allowed the school to provide its approximately 1,500 undergraduate and graduate students with cost-of-living grants to cover their expenses for finishing the semester at home, Strait said. Major funding help for the grants came from the federal CARES Act, from which the school received about $1.2 million. At least $600,821 of that total had to go to students.

Nevertheless, Saint Mary’s still could be hurt financially if COVID-19 outbreaks force it to send students home for the fall semester, Strait said. The unpredictability of the situation makes it difficult to plan ahead.

Saint Mary’s has implemented a number of cost-saving measures that include a hiring freeze, offering employees voluntary unpaid leave and temporarily pausing contributions to employees’ retirement plans. The school also will begin classes two weeks early, starting the week of Aug. 10, and go without fall breaks to finish the semester right before Thanksgiving, said Mona Bowe, vice president of enrollment management. Saint Mary’s and many colleges plan to have students stay home after Thanksgiving break to limit their travel and to reduce the risk of students bringing COVID-19 to campus after the holiday.

Saint Mary’s enrollment looks strong for the fall, Bowe said. “As of today (June 12), our incoming class is larger than last year by about 4%.”

The growth results from putting more effort into reaching out to a larger number of qualified students. Applications and acceptances totaled well ahead of normal before the pandemic hit in March. However, some incoming and returning students still could decide to sit out at least the fall semester because of concerns about getting COVID-19, Bowe noted. 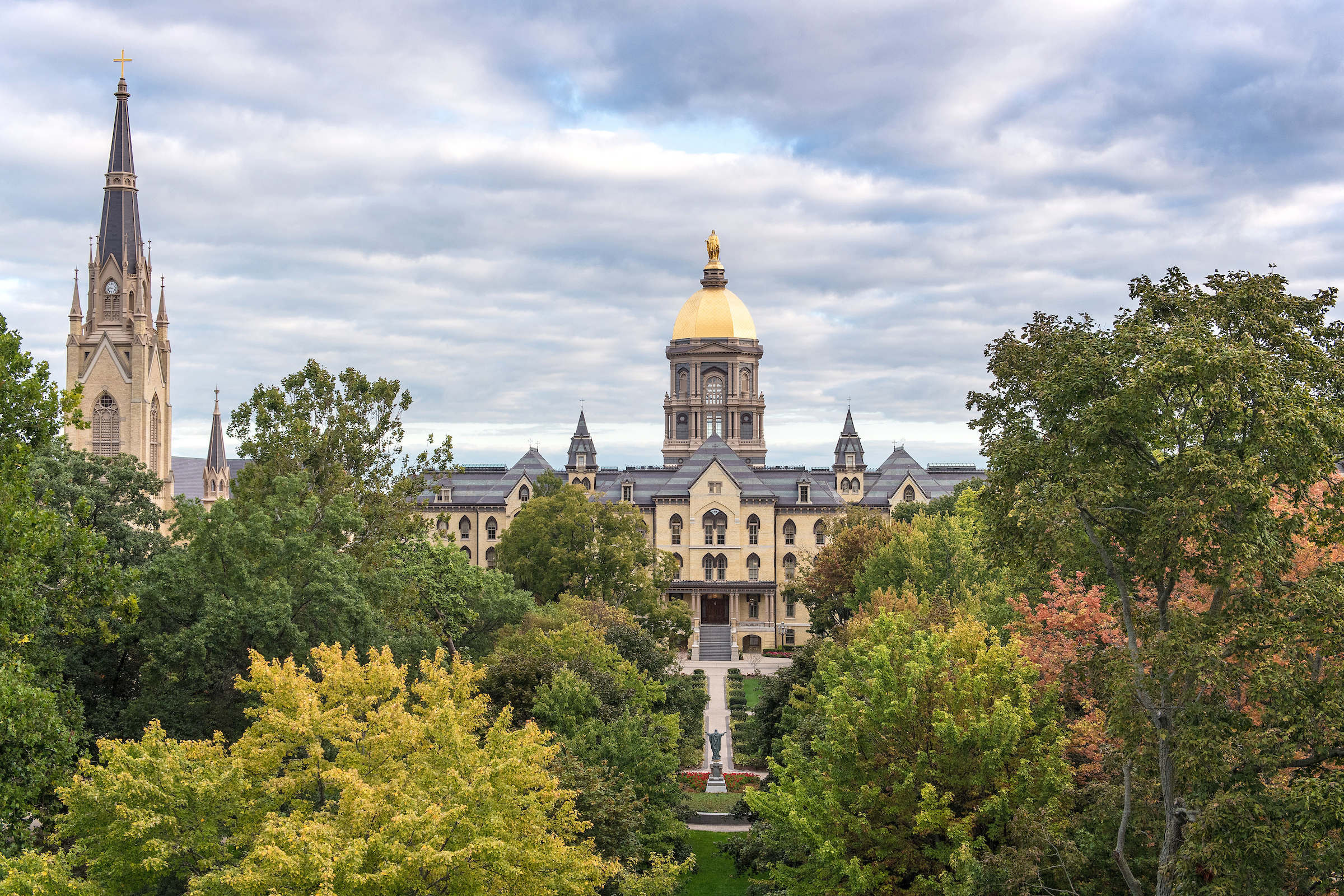 The University of Notre Dame has taken a number of steps to minimize the pandemic’s impact on its budget, such as initiating a hiring freeze, postponing some construction projects and eliminating employee pay increases for this fiscal year.

With the largest enrollment among Catholic colleges and universities in the diocese — around 12,600 undergraduate and graduate/professional students — Notre Dame absorbed a bigger financial punch from the COVID-19 pandemic. For example, the university refunded $20 million in room-and-board fees to undergraduate students sent home from dormitories midway through spring semester because of COVID-19, Dennis Brown, assistant vice president and university spokesman, said by email.

“As with all colleges and universities, the pandemic has created financial challenges,” Brown said.

Notre Dame, which was slated to receive nearly $5.8 million in CARES Act funds, joined other nationally prominent universities in turning down that money so more funds could be available to other schools with students in need, news reports said.

In addition, senior leadership and some members of the athletic department reduced their salaries voluntarily, Brown said.

Regarding enrollment, Notre Dame caps each incoming class at about 2,100 students and expects to do the same this year.

Students will start classes two weeks early, during the week of Aug. 10, go without breaks and finish the semester just before Thanksgiving, the university announced previously. Those plans could change if COVID-19 developments warrant it.

University of Saint Francis relies heavily on students’ tuition for revenue, so officials hope for strong enrollment when in-person classes resume this fall.

USF will watch its fall enrollment closely because private colleges are heavily dependent on tuition income, said Sister Elise, who will retire June 30. She will be succeeded by Father Eric A. Zimmer.

Over the past five years, enrollment of traditional younger students has declined slightly at the Fort Wayne campuses, she said. That has been offset by increased enrollment of other students and by enrollment growth at USF’s Crown Point campus.

So far, the number of new and returning students enrolled for the fall looks good. The school is usually attended by around 2,200 undergraduate and graduate students.

However, some students may decide at the last minute to sit out a year or a semester because of concerns about getting COVID-19, Sister Elise added. Others who would have lived in a dormitory may opt to live at home and commute to classes.

The university’s financial situation was bolstered by nearly $1.9 million it received in federal CARES Act funds. USF used half of the money to refund room-and-board fees to students in USF dormitories who had to move home when the pandemic shut down the campus. The funds also helped students with costs associated with staying home and completing classes online.

USF intends to use the rest of its CARES funds to reimburse itself for some of the cost for sending students home and refunding fees, she said. Some funds also will go to preparing the school for future online learning.

USF faces other expenses, such as providing face masks to everyone on campus and supplying hand sanitizer, she noted.

Current plans call for USF to start in-person classes Aug. 24 and go without breaks until Thanksgiving. Students will stay home after the holiday to finish classes and take final exams online as a precaution against the spread of COVID-19.

The five Catholic colleges and universities in the Diocese of Fort Wayne-South Bend plan to resume in-person classes when the 2020-21 academic year begins in late summer.

The benefits to students go beyond classroom learning, officials said.

For 18- to 21-year-olds, college years offer growth opportunities through personal relationships, having a roommate, hands-on learning in laboratory classes, working with others in a group, and participating in clubs and activities, said Sister Elise.

“That age of student wants to be here.”

Saint Mary’s College prides itself on the close relationships students can develop with faculty and on the opportunities students have for social and other interaction with each other, said Bowe. The interaction includes growing in the Catholic faith by attending Mass, participating in retreats and joining other young people in discussions about beliefs and issues.

“Through its 178-year history, Notre Dame has believed in the residential campus experience, and we have doubled-down on that approach in recent years with the addition of new residence halls and more than $400 million in construction of teaching, research, student life, performance, multimedia and hospitality space,” Brown said. “In the tradition of our founding religious community, the Congregation of Holy Cross, Notre Dame seeks to educate the mind, the heart and the spirit, and we believe that is most effectively accomplished through the personal interaction found on campus.”