The mother and her children left their Central American homeland and migrated legally to the United States in hopes of a better and safer life in Northeast Indiana. They ended up in the dark world of human trafficking.

Catholic Charities’ Trafficking Survivor Services program is helping them and other survivors rebuild their lives and dreams.

“It can happen to anyone,” said Melissa Singh, community services supervisor at the Diocese of Fort Wayne-South Bend organization.

The social services provider started its Trafficking Survivor Services program in 2016 after learning about increased human trafficking in the local area.

“We seek to help each person find that dignity God has given them,” said Nicole Kurut, Catholic Charities’ mission advancement coordinator.

The work grows out of Catholic Charities’ mission to serve those in need and the most vulnerable among us, according to Kurut and Singh.

Labor trafficking victims are forced to work for family members, businesses or others.

The people at greatest risk for becoming trafficking victims include those going through a migration or relocation, people abusing drugs or alcohol, runaways or homeless youth and those living in unstable housing, said information provided by Catholic Charities. 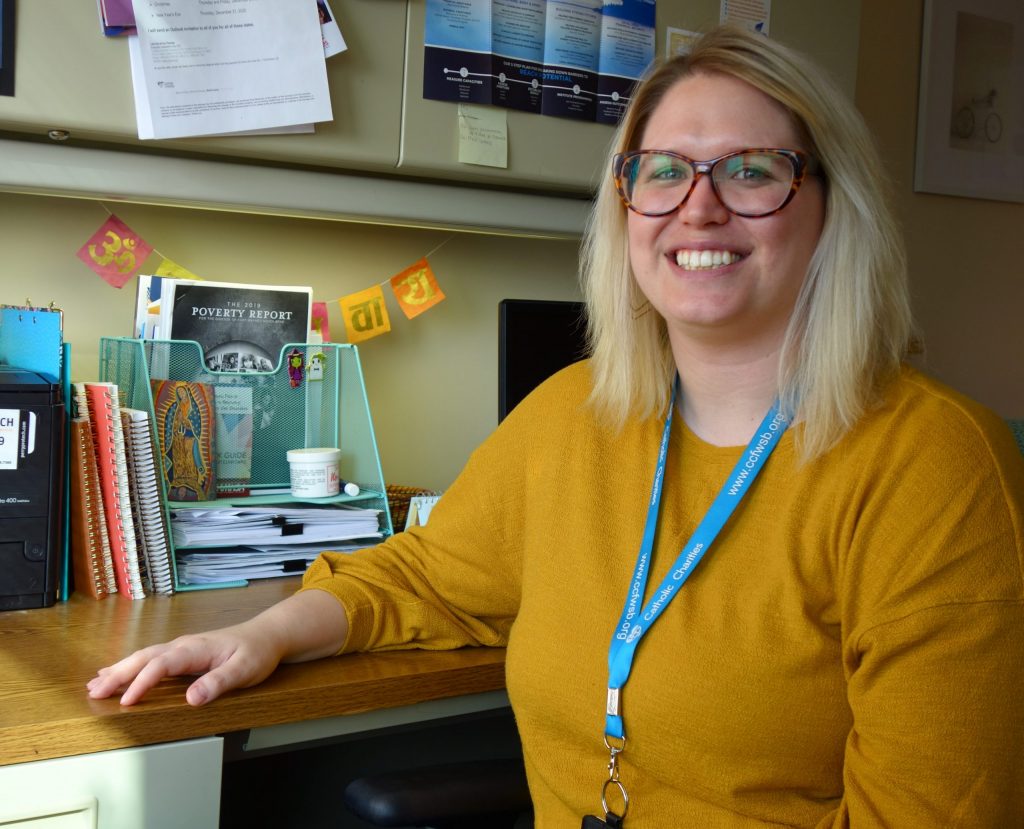 While trafficking may be more common in large, metropolitan areas, it has become a growing problem in communities and rural areas in Northeast Indiana, said Singh. “We’re kind of in the middle of everything.”

Traffickers and their victims may live in this area, but victims easily can be transported to Ohio or Michigan for trafficking. Northeast Indiana also is only a few hours’ drive from Indianapolis, Chicago and large cities in Ohio.

The hotline shows the Fort Wayne and South Bend areas among several human trafficking hotspots in Indiana, based on trafficking data plotted on a state map. Specific numbers weren’t available, however.

Most people assume strangers grab trafficking victims off the street, said Singh. In reality, most victims know their traffickers well.

Parents may traffic their children to earn money, said Singh. Women may give in to trafficking at the request of a boyfriend. Some people may not even realize they are being trafficked, she said.

Singh can’t emphasize enough that a person needs to trust their gut, know when to say no and understand that it’s OK to say no.

The Central American family, for example, didn’t know English or understand American culture when they arrived in Northeast Indiana, which left them vulnerable to traffickers, said Singh. They didn’t have housing and couch surfed among people from their country they knew only casually. The mother also didn’t know how to enroll her children in school.

The agency’s Trafficking Survivor Services program supports victims as they reclaim their freedom and their lives. The journey can be a difficult one.

Most traffickers spend time grooming a victim before pushing him or her into the sex trade or forced labor, said Singh. “It’s so gradual you begin to think it’s OK,” she added.

The victim’s familial or strong personal relationship with the trafficker makes it difficult for many victims to leave, just as many domestic violence victims struggle emotionally with leaving their abuser. It typically takes seven attempts to leave before a victim finds the strength to stay away from the trafficker.

After being contacted by a victim or receiving referral information from another agency, Singh will meet with the victim to gather more information about the person’s situation and his or her goals and needs. Case managers help the person start moving toward those goals, and the agency can provide wraparound services including food, clothing and housing, said Singh. Catholic Charities also can assist with immigration services and mental health counseling if needed.

Singh meets with clients every three months to discuss the person’s short-term and long-term goals.

Catholic Charities’ Trafficking Survivor program currently serves eight people, including two boys, Singh said. It has assisted more people, but the number of participants varies because some move around frequently, and some go back to their trafficker.

Services for victims ages 24 and younger are funded through the Indiana Trafficking Victims Assistance Program, according to Singh. Trafficking victims 25 and older are assisted through its normal programs, most of which are free.

“They really are one of our key partners in Northeast Indiana,” said Jeremy Greenlee, ITVAP Region 3 coalition coordinator.

Along with the ability to offer survivors an array of services, Catholic Charities has great relationships with refugee and cultural communities in the area, said Greenlee. The agency also collaborates well with other social service providers to best assist trafficking survivors.

In addition, Catholic Charities provides education sessions about human trafficking at parishes throughout the diocese. Agency staff also visit the four Catholic high schools to teach about healthy relationships and how to stay safe on the internet and social media.

“Education is huge on this,” Singh said of preventing and ending human trafficking.

Catholic Charities’ work can have powerful impact. The Central American family that fell into trafficking after immigrating to the United States now is thriving, said Singh. The mother works full time, and her income covers more than their household expenses. The family has stable housing, and all the children attend school.

The son who was trafficked loves school and is doing well.

“It is absolutely amazing to see families progress from being at what would be some of the lowest points in their life to overcoming these major obstacles in order to achieve their dreams,” said Singh said. “Their strength truly inspires me to do what I do. This program also shows me the impact of hope.”

Trafficking victims or people who suspect a person is a victim of human trafficking can contact Catholic Charities’ Trafficking Survivor Services program at 260-422-5625 or www.ccfwsb.org.