CLEVELAND (CNS) — Scott Milliken has seen a lot of people come through the doors at the Father English Center’s food pantry during his years as CEO of Catholic Charities of the Diocese of Paterson, New Jersey, but not like the numbers since the coronavirus pandemic hit in March.

“We are feeding more people than ever,” he said. 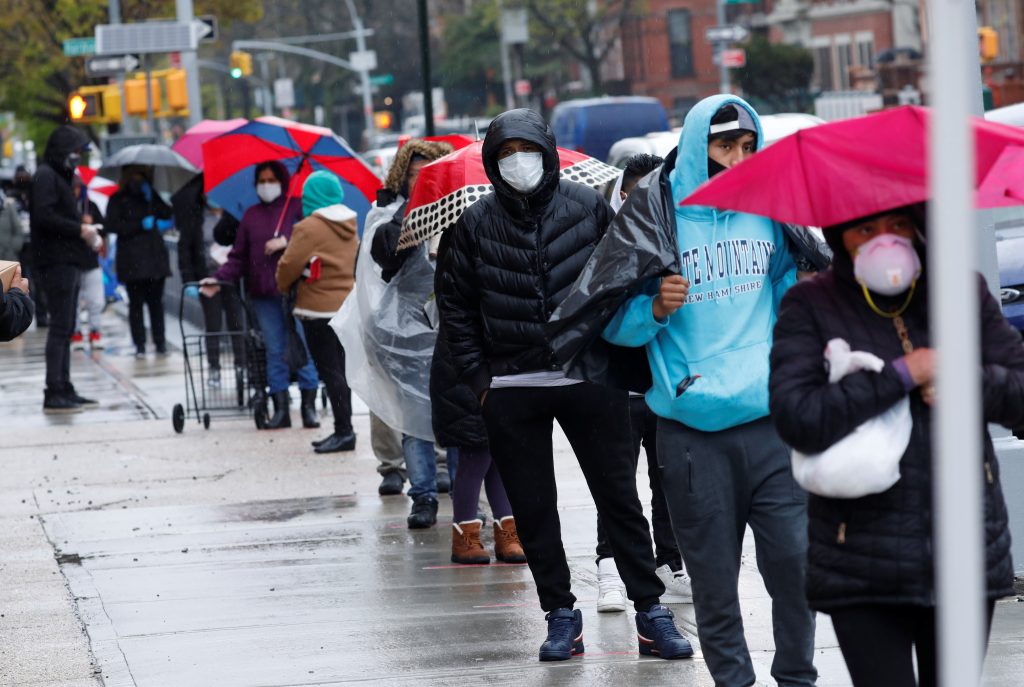 People in New York City wear protective face masks as they wait in line to receive free food at a curbside pantry for needy residents run by Catholic Charities April 24, 2020, during the coronavirus pandemic. Catholic Charities USA agencies have provided nearly $400 million in assistance during the first four months of the pandemic. (CNS photo/Mike Segar, Reuters)

In terms of quantity, the amount of food distributed between March and July totaled 940,000 pounds, far beyond a typical month before COVID-19, the illness caused by the novel coronavirus, arrived. Milliken estimated the food to be worth about $1.6 million.

Milliken said the agency has seen demand for short-term utility payment and rental assistance and other needs skyrocket by 60% a month from pre-COVID-19 times. Since March the agency has distributed $1.8 million – on average about $1,500 per household.

The agency leader doesn’t expect things to change any time soon, especially since the July 31 end of the temporary unemployment benefit of $600 per week that was included in legislation passed early in the federal response to the pandemic.

“The increase just on Monday (Aug. 3), the phone was just ringing off the hook of people who need services,” Milliken told Catholic News Service. “They’re worried about losing their homes. Their worried about feeding their families.”

The response in the Paterson diocese is part of nearly $400 million in emergency aid and services that Catholic Charities agencies nationwide have provided since March in response to the pandemic-induced economic recession.

“There are a lot of food and housing-related issues being met,” Dominican Sister Donna Markham, CEO and president of Catholic Charities USA, said.

Information gathered over the last two weeks by the umbrella agency for U.S. Catholic Charities operations showed that the clients seeking assistance comprise a broader demographic than low-income and poor households that traditionally walk through the doors.

Sister Markham said that among the 50% to 70% increase in the number of clients are people from middle-class families who lost their jobs as the pandemic surged during the spring. “And they are trying to figure out how they are going to eat and pay their rent or mortgage,” she told CNS. 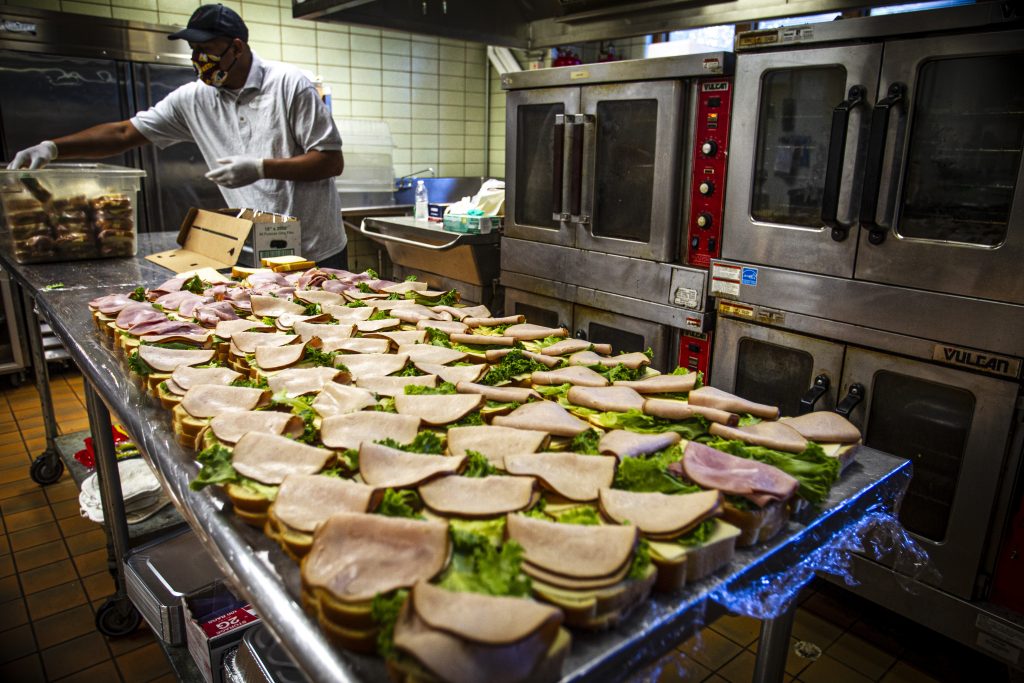 A Catholic Charities’ worker places a sandwich in a bin at the St. Ann’s Center for Children, Youth and Families facility in Avondale, Md., July 14, 2020, to be packaged in boxed meals for needy residents of the greater Washington area. Catholic Charities USA agencies have provided nearly $400 million in assistance during the first four months of the coronavirus pandemic. (CNS photo/Chaz Muth)

Similar requests are being made beyond Catholic Charities, Sister Markham added.

“The whole charitable sector is being stretched to the limit. How long can that be sustained without some significant government support?” she asked.

Some of the need has been met by corporate donors and small companies that have stepped in to provide food in particular.

Jessica Sillaro, owner of The Bread Gal in Paterson, New Jersey, has provided bread, rolls and other baked goods to the Father English Center, the agency’s addiction recovery program and its Department for Persons with Disabilities as well as other charitable outlets in the city 22 miles northwest of New York City.

“We did anything we could. We reached out to some people who we thought would be in need,” Sillaro told CNS.

Even though from the start the pandemic had cut into Sillaro’s ability to sell products to local businesses and restaurants, she said she wanted to continue forming a “strong bond with our community.”

The diocese reported that at the peak of the pandemic Sillaro was providing 10,000 individual bakery products weekly.

“We’re just trying to do our part. Nothing special,” she said.

At Catholic Charities of San Antonio in Texas, requests for food jumped from between 300 and 400 families per week to an average of 3,500 per week from April through June, said Antonio Fernandez, the agency’s president and CEO.

Through Aug. 1, the operation had distributed 490,000 pounds of food, much of it donated from grocery stores and corporate partners, Fernandez said. Agency staff members are planning to distribute food to 5,000 people — another 70,000 pounds — Aug. 8.

Food is just one area that has seen a sharp rise in demand. Rising numbers of people have sought legal services, assistance with income tax filing, emergency shelter and counseling, Fernandez said. Overall, the added needs have cost slightly more than $10 million, according to agency statistics.

Elvira Ramirez, executive director of Catholic Charities in the Diocese of Stockton, California, said the rising number of cases in the largely agricultural region the agency serves has led a burgeoning need among military veterans and working families who face losing their homes.

“They are coming from all different directions. It’s definitely because of COVID that existing problems are getting worse. And now it’s about working families who are getting behind and their ability to support their families,” Ramirez said.

“It’s mostly agricultural and restaurant workers and domestic workers. It’s people who were probably on the edge and living paycheck to paycheck,” she said.

The agency has received support from the U.S. Department of Veterans Affairs as well as local foundations to meet the increased need. However, Ramirez wonders how long the funds will last as the pandemic resurges in California.

Despite the difficulties, the agency leaders are maintaining a positive attitude.

“I tell our folks, ‘Let’s not get overwhelmed. Let’s see how we can help,’” Ramirez said.

Fernandez stepped in at his agency’s food center after 100 employees had to be placed in quarantine after a volunteer tested positive for the coronavirus even though the full range of safety precautions recommended by Texas officials was implemented.

“You show the others we have to step up,” he said.

Milliken in New Jersey said he sees “light in the people” who provide assistance as well as those seeking help.

“The people that we’re serving, they know that people care. There’s light in people who are providing donations to use so we can do what we do. There’s light in the staff. They’re essential employees. Our staff is on the front lines feeding and helping people, putting their own lives at risk, too,” Milliken said.

“Everybody’s worried, but there’s light in the good people of the world. The history of Catholic Charities has shown we come together as people and as a Church to help those who need help.”