Families around the world have experienced unexpected and rapid changes during the past two years. During that time, in the Diocese of Fort Wayne-South Bend, Catholic Charities has managed to not only maintain its community outreach but expand it — all with an uncommonly joyful outlook.

“On top of helping people impacted by the pandemic, we’ve recently added assistance to the Afghani refugees, as well,” Nicole Kurut, mission advancement manager at Catholic Charities Fort Wayne, said. Kurut believes COVID-19, while stressful for all, has given Catholic Charities employees the opportunity to be creative in the ways they can reach those who are isolated or sheltering in place. 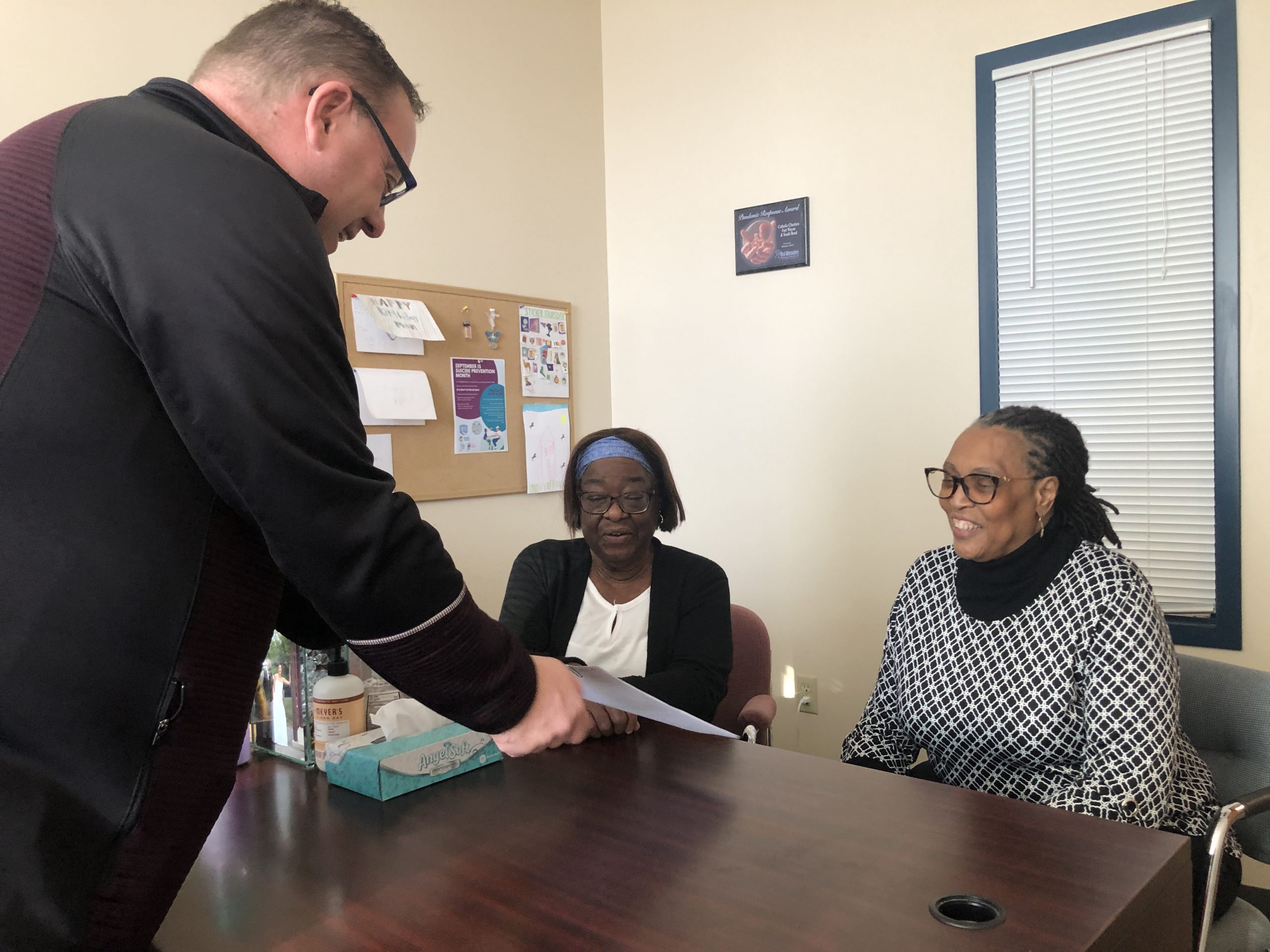 Provided by Nicole Kurut
Aaron Roberts updates Catholic Charities employees on the Senior Community Service Employment Program in December. Roberts began working at Catholic Charities during the thick of the pandemic. During the public health crisis, the agency has managed to not only maintain its community outreach but expand it — all with an uncommonly joyful outlook.

They collaborated with the Fort Wayne Rescue Mission and the Center for the Homeless in South Bend to help the unemployed find health insurance and a stable job, and for those who have been evicted to find housing and a pathway forward that will provide self-sufficiency so they will not have to return to the shelters in the future. “Catholic Charities case managers work with those in the community to help them overcome their unique barriers,” Kurut added.

When the pandemic first hit, there was a moratorium on evictions. Now, Catholic Charities is seeing more people on the street, including those they haven’t seen before. This social issue has created an increased need for well-stocked food pantries. “These are traditionally stable, career-oriented people,” Kurut said. 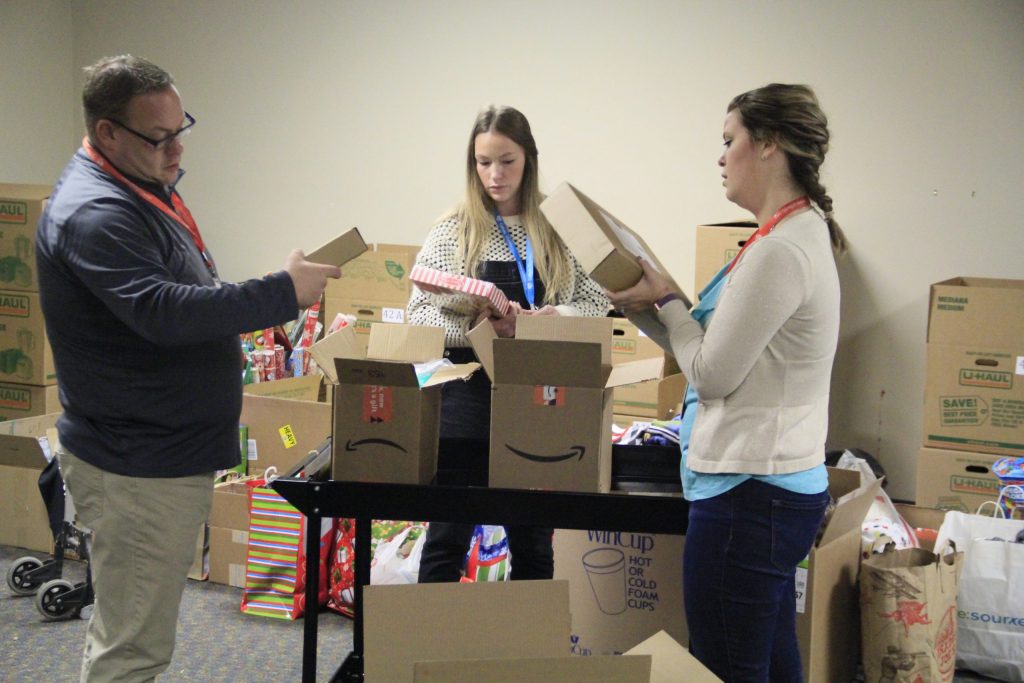 Because nonemergent medical procedures halted at the beginning of the pandemic, Kurut also noticed an increase in people who needed medical assistance, which Catholic Charities also provides help in acquiring.

Of the 20 different programs at Catholic Charities in the diocese, the ones with the greatest impact during the past two years have been the Financial Assistance Program, which helps people pay utilities and mortgages for past due expenses, and the Emergency Rental Assistance program, which helps those pay past due rent or utilities. Case managers help people fill out the necessary paperwork and get it promptly turned in to the city before their electricity is shut off. “Our goal is to prevent families from further descent into poverty,” Kurut said.

“We want to help people stay in their homes. The pandemic has affected the middle class immensely, but we’ve seen it spread over every socioeconomic class.” 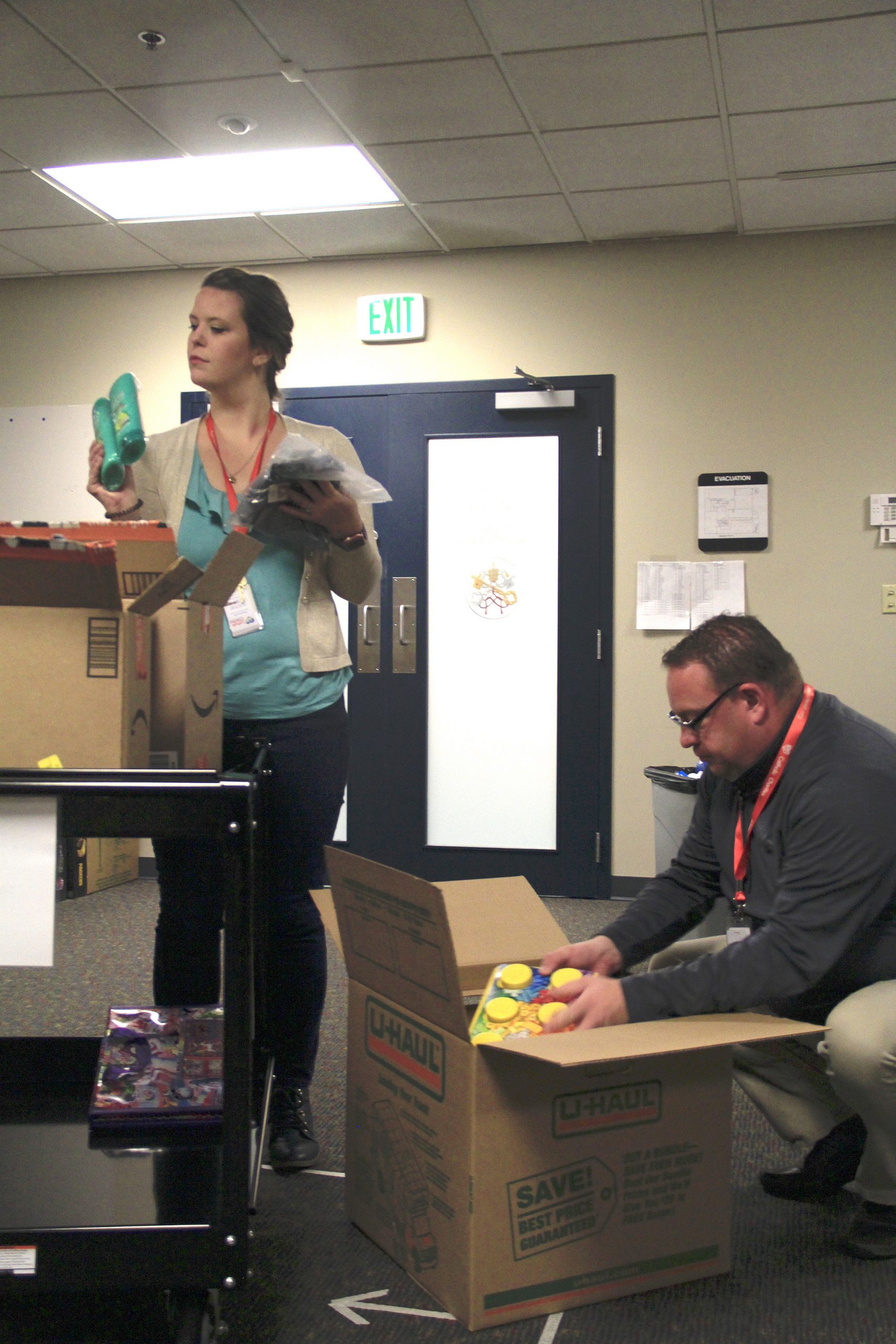 Jodi Marlin
The children of Catholic Charities clients – before the pandemic and now — receive free gifts at Christmastime that have been donated by parishes, individuals and the community. Community Service Employment Manager Aaron Roberts, Mission Advancement Manager Nicole Kurut and Mission Advancement Assistant Isabella Witulski sort this year’s donations and prepare them for delivery.

The stressors related to COVID-19 have taken a toll on people’s mental health, too. Counselors at Catholic Charities see kids at school and clients in office and virtually, most of whom exhibited anxiety over disrupted schedules and the constant news about the pandemic.

A lot of people who sheltered in place didn’t initially seek out mental health services because they were afraid and didn’t know where to begin, she said. “Now that things are slowly moving forward, people are starting to emerge from their fear and seek the help they have needed.”

The generosity of those who have donated to the agency has been overwhelming to Kurut and other staff members. Many donations of items and money during the past two years have been unsolicited.

“We did a couple of radio ads on Redeemer Radio, but after that, a lot of people in the community sent donations without our request,” Kurut said. The implication was that most people realized they could donate their tax stimulus checks. “They knew that Catholic Charities is the agency that serves everyone in need, despite their background — as Christ would have them do,” she added.

Because of the Resource and Referral program, more than 3,300 individuals were able to receive support and stay in their homes and keep their lights on because of Catholic Charities’ services – people who would otherwise be out on the street. And at its food pantries in Auburn and South Bend, Catholic Charities served more than 4,000 people.

“More than ever, it’s easy to call ourselves Christians,” Kurut shared. “Unless we are acting in the place of Jesus and serve all those in need, we cannot be true Christians. It’s hard to admit when you have fallen on rough times, but we do not look at people with judgment.”

Many people have lost all hope by the time they arrive at Catholic Charities, she said. It’s not necessarily financial poverty, just the poverty of losing hope that they will never graduate high school, that they will always be depressed, or that they will never hold a job or learn English. The first person to tell them that they can overcome these obstacles is often a Catholic Charities case manager. “Not only do we tell them that they can do this, but we sit down with them and map out a plan that works long term. We walk with clients for several years,” Kurut said.

Aaron Roberts began his job as senior community service employment program manager at Catholic Charities in Fort Wayne in the thick of the public health crisis. Because senior citizens are at high risk for contracting COVID-19, the program had shifted from solely providing in-person training for clerical, janitorial, and kitchen cook professions, to virtual training, he explained.

“I believed a lot of the seniors would be afraid to go out into the community, but I found the opposite to be true — I saw their desire and enthusiasm to reenter their communities, be social, gain employment.”

Roberts shared that a woman in the program who was training for clerical work ended up being incarcerated: But the program was able to provide remote training so that afterward, she could work from home and maintain the focus on job readiness skills. Because of her incarceration, she was able to remain in the program, save money and eventually purchase a vehicle, then gain a position working at a local bakery in Fort Wayne.

“This success showed me the benefits of being compassionate in meeting a person where they are and walking with them every step of the way. Meeting with her weekly, either on the phone or virtually, helped her maintain that focus to reach her goals. I saw so many people helped by what we do,” Roberts said.