In light of the 500th anniversary of the Reformation this year, Protestant denominations worldwide have been reflecting on the events, architects and dogmas of their faith. As part of its own observance, Trinity Lutheran Church in Elkhart welcomed Bishop Kevin C. Rhoades to its campus Oct. 23 to present his reflection on the pivotal event in Christian history. 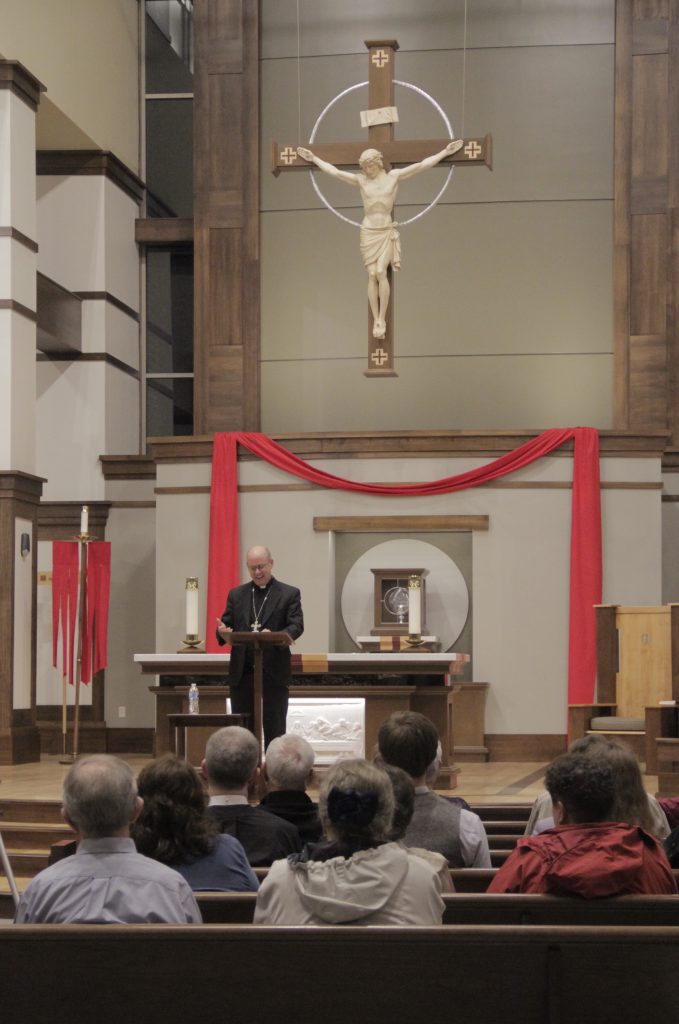 Offering his perspective on the motivations for and effects of the Reformation, Bishop Kevin C. Rhoades speaks to members of Trinity Lutheran Church, Elkhart, on Oct. 23. On Oct. 31 Protestant denominations will observe the 500th anniversary of the date Martin Luther set the Reformation in motion by nailing his 95 Theses to the door of Castle Church in Wittenberg. — Jodi Marlin

Dialogue between Trinity, which is a Missouri Synod Lutheran church, and the Catholic Church did not begin, but rather continued, with the bishop’s discourse. In 2016, Trinity and St. Pius X Parish in Granger initiated a reciprocal series of Spirit-led discussions, presentations and tours which, the clergy of both entities hoped, would forge fellowship and open communication between the two faith communities and increase understanding among their members. 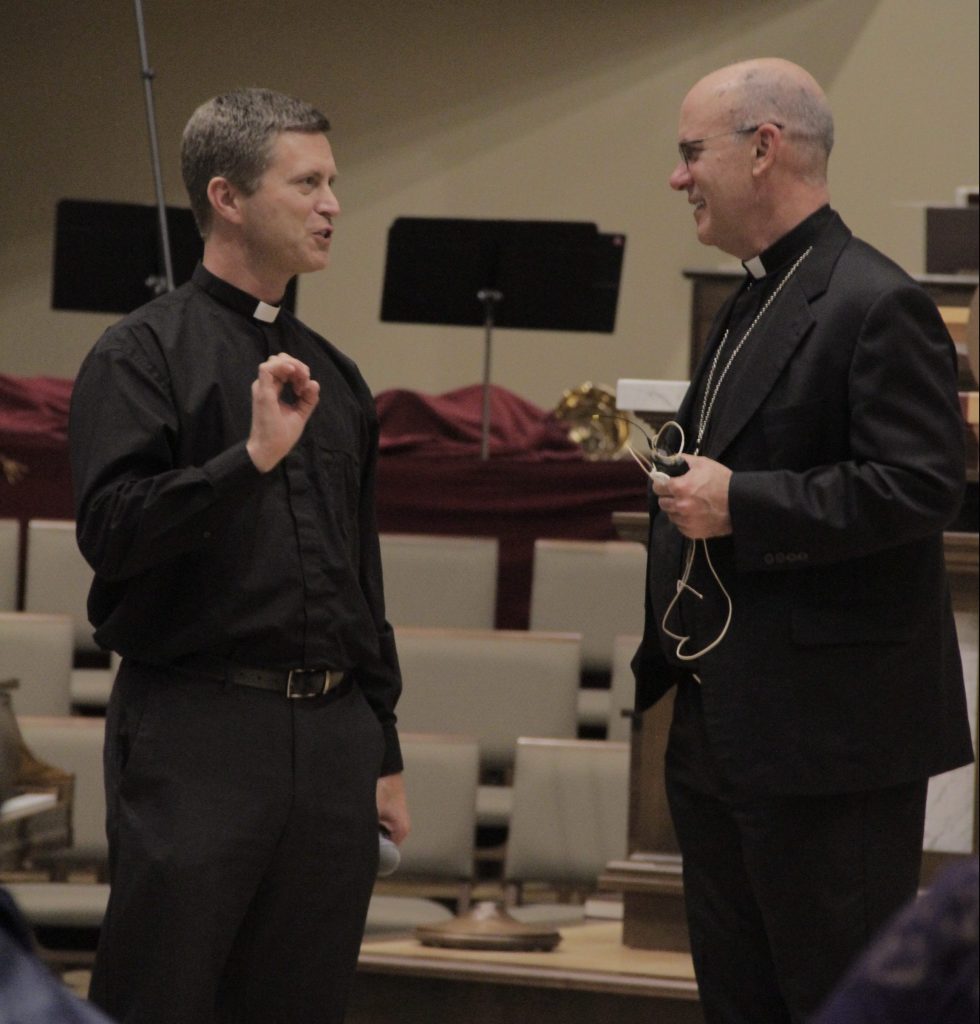 Trinity’s pastoral team also began to give thought last year to how it would commemorate the anniversary of the Reformation. “We felt strongly that, while we wanted to rejoice in the gifts of our Lutheran tradition, a ‘celebration’ was not quite in order,” Associate Pastor Spencer Mielke recalled. “How does one ‘celebrate’ the division of Christ’s church? We, at Trinity, believe that the Reformation was originally intended to be a reform movement in the church and not become a separate church. History, unfortunately, did not play out this way.

“Thankfully in recent times, much progress has been made and more conversation has happened between Catholics and Lutherans in the last 50 years than the rest of the 500 years. In these ever-darkening times, we believe Christians, and especially those of us in the great Catholic tradition, need each other. What we share in common belief is vastly more than where we differ,” he noted. “We must speak and work together as Christians — especially for the unborn, for marriage and family.” 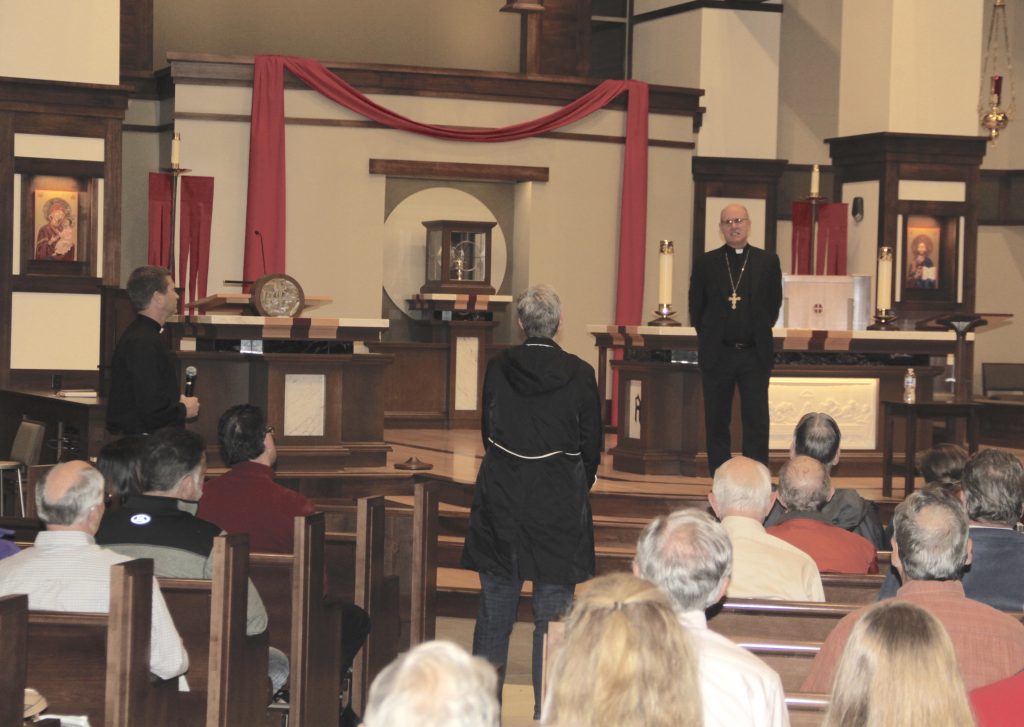 Bishop Rhoades takes a question from the audience
following his presentation. — Jodi Marlin

In his opening remarks, Bishop Rhoades referenced the fraternal exchanges between Trinity and St. Pius X, expressing joy and gratitude for them. “I am very happy to see this friendship, a local expression of the holy quest for Christian unity that marks our commitment as Catholics and Lutherans to the restoration of full communion between us,” he said. “Together we believe that Christ calls all His disciples to unity. We know that this is a great challenge, especially after 500 years of separation. It is a difficult path in many ways, yet we can give thanks to God for the progress that has been made in this journey the past 50 years.

“On the eve of His sacrifice on the cross, Our Lord prayed to the Father for His disciples that ‘they might be one,’ he continued. “Our division contradicts the will of Our Lord. The Second Vatican Council stated that our division ‘openly contradicts the will of Christ, provides a stumbling block to the world, and inflicts damage on the most holy cause of proclaiming the Good News to every creature’” (UR 1).

When he was younger, the bishop said, he observed differences, but also a growing respect and love between members of his own Catholic, Lutheran and Greek Orthodox extended family. “So, though I speak from the perspective of a Catholic bishop, I am a Christian with a living and personal family ecumenical experience. One thing I have learned from this experience is that what we hold in common, what we believe in common, is far greater than our differences. Too often, we focus on the differences and disagreements, which can cloud this truth.

“I think it is important as I share with you my reflections on the Reformation, and this is very important in ecumenical relations, that we keep in mind the beliefs we share,” Bishop Rhoades emphasized. “They are core beliefs. … There is a communion among us which already exists, though it is imperfect. In the Catholic Church, we speak of a hierarchy of truths. There is an order of the truths in Catholic doctrine, insofar as they vary in their relation to the central mystery and foundation of Christian faith. The central mystery of Christian faith and life is the mystery of the Most Holy Trinity. We share this Trinitarian faith. We share faith in the Incarnate Son of God, in Jesus as Our Lord and Redeemer. We both honor Sacred Scripture as the inspired Word of God. We share faith in all the articles of the Apostles’ and Nicene Creeds. The common faith that we already share should not be taken for granted nor considered unimportant, especially given the increasingly post-Christian society in which we live at this time,” he encouraged.

“What happened 500 years ago next week was not a declaration of separation from the Catholic Church. On Oct. 31, 1517, Martin Luther sent his 95 theses to the Archbishop of Mainz. In that letter with the 95 theses, Luther expressed his serious concerns about the preaching and the practice of indulgences. His desire was to have an academic discussion, a disputation, on this issue. Luther felt that the practice of indulgences was damaging to Christian spirituality. I wonder sometimes what would have happened if the pope or bishops at the time had been more open to Luther’s call to reform, rather than react as they did. Or if Martin Luther had been more patient in his reform efforts, appreciated more the Church’s earlier unsuccessful efforts at reform as well as the positive aspects of late medieval theology and piety,” he said. “Could the split have been averted if both sides acted more in conformity with the charity of Christ? There was certainly corruption in the Church that needed to be rooted out. More rigorous reforms were needed.”

“You may remember the historic visit of Pope Benedict XVI to the ancient Augustinian convent in Erfurt, Germany on Sept. 23, 2011. It was in that convent that Luther studied theology and where he celebrated his first Mass. On that occasion, Pope Benedict said the following: ‘What constantly exercised Luther was the question of God, the deep passion and driving force of his whole life’s journey. “How do I receive the grace of God?”: this question struck him in the heart and lay at the foundation of all his theological searching and inner struggle. …’ Pope Benedict said that the fact that this question (‘How do I receive the grace of God?’) was the driving force of Luther’s whole life never ceased to make a deep impression on him.

“We can’t change the past,” the bishop continued. “History is history. But we can move forward learning from the past. Together, we reject the hatred and violence of the Reformation period. We must set aside conflict as we strive for the restoration of our full communion. It is important that we renew our commitment to theological dialogue and not give up on the hope of reunion, of one day receiving the Eucharist together. … We must persevere, with fervent prayer, to try to overcome these obstacles with the help of the Holy Spirit.”

That note of hope summed up a desire held by Leona Wilson-Mann, for unity between the two churches. Fellow Trinity parishioner Ron Stallman walked away mulling another point. “This question posed by Bishop Rhoades sticks with me: ‘I wonder what would have happened if the pope and archbishops would have been more open and Luther had been more patient?” As our dialogue as Catholics and Lutherans continues, may we now be open and patient. May we overcome prejudices and misunderstandings and remember that Christ would have his church exemplify his love and his desire that we may be one. As I left the gathering, I was smiling, and I believe Christ was too.”

Father Bill Schooler, pastor of St. Pius X, echoed the call to unity, “With the animosity of several hundred years gone, I hope that we can come to a better understanding of our theological issues both on which we agree and on which we disagree, and explore ways of being a brighter light as Christ’s body in this community.”

“I appreciated that he, a Catholic bishop, would say that he no longer just laments the Reformation, but is even thankful for its gifts,” reflected Pastor Mielke. “He also stressed that the task of ecumenism is not an option but a work that we must do. And yet, following John Paul II and Benedict XVI, it is ultimately not our work but a gift of the Holy Spirit. For this gift we must be open in prayer, humility and forgiveness.”

St. Pius X will host Rev. Rick Stuckwisch, pastor and theologian of the Lutheran Church Missouri Synod, at 7 p.m. Nov. 13, to continue the local Catholic-Lutheran dialogue. All are welcome to attend.