Many current and prospective members of the Catholic Church were brought together under one roof on Sunday, Feb. 27, in South Bend for the Rite of Election and Call to Continuing Conversion. At St. Matthew Cathedral in South Bend, Bishop Kevin C. Rhoades affirmed the nearly 175 individuals, overseen by their respective sponsors and godparents, as they publicly acknowledged their willingness to become full, faithful members of the Catholic Church through the sacraments of initiation.

One of the three sacraments of initiation, baptism, is typically the first administered, as it generally occurs at infancy, but can be done at a later time. By receiving this initial sacrament, one is considered a member of the Catholic Church. However, those wishing to become full members of the Church must receive all three sacraments of initiation: baptism, Communion and confirmation. 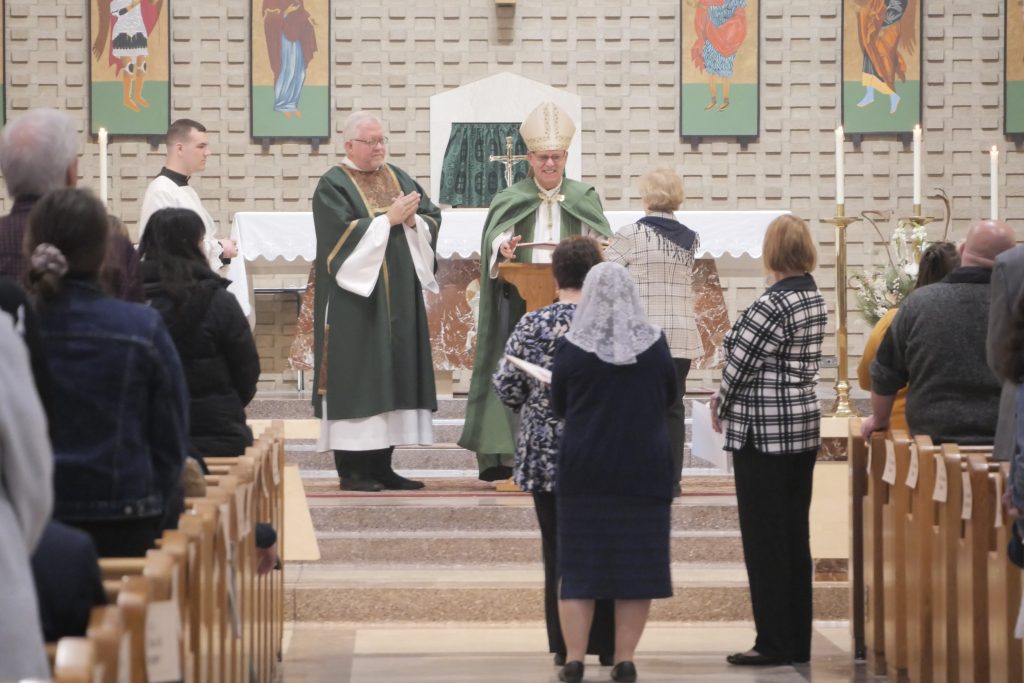 At the altar, Bishop Kevin C. Rhoades writes the names of catechumens from South Bend-area parishes in the Book of the Elect. Deacon Fred Everett, standing at the bishop’s right, assisted in the ceremony.

During the Rite of Election, catechumens, deemed the “elect” once the bishop signs their names into the Book of the Elect, gather to freely proclaim their commitment to receive all three sacraments of initiation. The Call to Continuing Conversion is similar. Here, candidates gather to publicly profess their intention to receive Communion and confirmation. Both catechumens and candidates will obtain the sacraments they have not yet received and thus enter into full communion within the Catholic Church this coming Easter.

The Office of Worship Director for the Diocese of Fort Wayne-South Bend, Brian MacMichael, stated that there were 111 catechumens and 63 candidates from South Bend-area parishes. Bishop Rhoades spoke on the blessings that both these catechumens and candidates would receive upon fully entering into the Catholic Church. 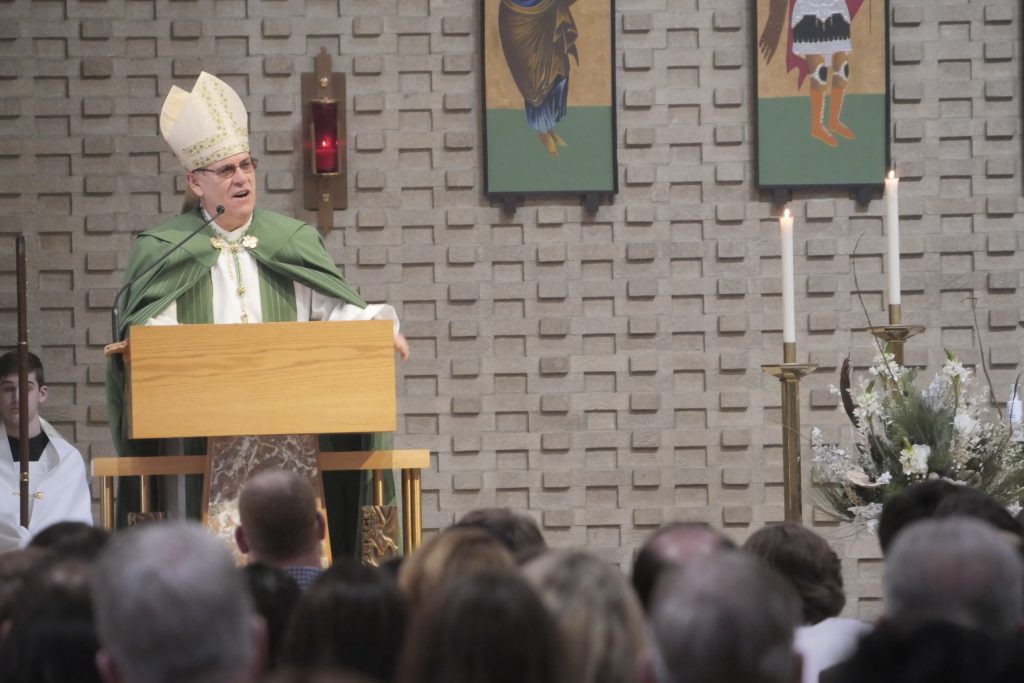 Bishop Rhoades welcomed the catechumens and candidates with St. Paul’s opening words to the Corinthians, found in that day’s reading: “Grace to you and peace from God our Father and the Lord Jesus Christ.” The bishop told them each respectively that they “will receive the beautiful gift of God’s grace in the sacraments of initiation” as well as “an increase of God’s grace,” that they will each partake in when fully received into the Body of Christ, the Church.

The bishop explained that this gift also “recalls God’s merciful love shown in Jesus Christ and bestowed on Christians through the Holy Spirit.” Concluding with this same theme, he told the catechumens and candidates present: “You will receive His sanctifying grace in the sacraments at Easter.”

During and after the celebration, catechumens and candidates were inspired by the welcoming invitation and encouragement for the continuation of their journeys of faith that the bishop and their loved ones provided.

Wendy Gúzman, a catechumen from St. John the Evangelist Parish in Goshen, explained that before regularly attending church and understanding its importance, she felt empty – her consistent attendance filled that emptiness and lit the spark to her conversion, she said. The number of priests present at the Rite of Election moved her, and she conveyed her joy in knowing that she would soon be able to approach the altar and receive the sacraments she so desired from the priests. Already happily married, she is most looking forward to validating her marriage in the Church upon entering into full communion. 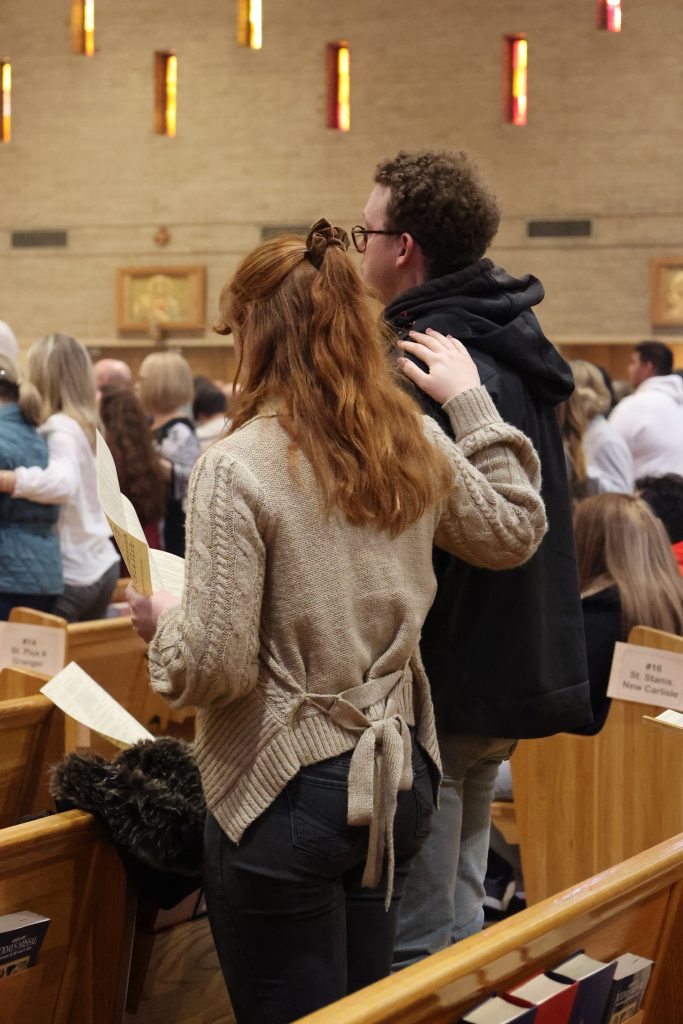 Photos by Jennifer Barton
Catechumens and candidates gather in St. Matthew Cathedral in South Bend on Feb. 27 for the Rite of Election and the Call to Continuing Conversion. Pictured above, Alex Bliss, a catechumen from Holy Family Parish, is accompanied by his fiancé and sponsor as he completes the RCIA process to become Catholic.

Originally from Jackson, Michigan, Alex Bliss has been going through the process of entering the Catholic Church at Holy Family Parish in South Bend. He expressed that his yearning to join the Church sprouted from a prolonged “struggle with faith and religion.” He further explained that becoming Catholic “is another beginning” for him, fulfilling his desire to spend his whole life with his now-fiancé after his conversion. Looking forward to the lifelong love they will share, he insinuated that every Catholic is called to lead others to heaven, the true place where eternal love abides.

Formerly a member of another Christian denomination, James Johnson, a candidate from Holy Family, explained the reasoning behind his conversion as a result of a loved one’s passing — who happened to be Catholic. “When we did Mass for her, I noticed that there was a lot of relief that came off my shoulders.” He reiterated that, “It felt like it was a lot of anger coming off my shoulders.” James is most looking forward to stepping back into the faith and expressed his excitement at meeting Bishop Rhoades.

During the approaching Easter Vigil Mass, the Catholic Church will receive these 174 individuals into full communion and joyfully anticipate their entrance, welcoming them home with open arms.