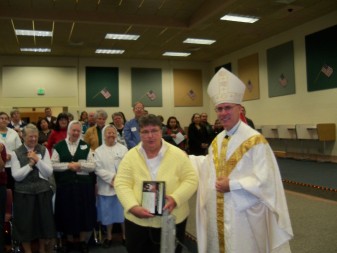 St. Mother Theodore Guérin Award recipient Mary Barnes is presented with her award by Bishop Kevin C. Rhoades at the 21st annual Catechetical Institute Day in Syracuse on Nov. 5. The award is presented annually to directors of religious education or catechists who exemplify leadership and service. The other recipient this year was Franciscan Sister Marilyn Ellert.

The theme this year was “The Eucharist — Embracing the Source and Summit of our Faith.”

Dr. David Fagerberg, a professor in the theology department at the University of Notre Dame was the keynote speaker. Fagerberg spoke to the catechists about their role as educators.

“Education answers the question, ‘What is real?’ but maybe it’s not enough for educators to teach us what a star is made of — having an understanding that stars are a gift of the Creator is equally important,” Fagerberg said.

He said, “Despite what the new militant atheists believe, Catholics don’t see friction between science and the Creator. Theology is a science. … Theology tells us what a thing is on the way of becoming — only theology looks at the whole picture — the Alpha and the Omega, the beginning and the end.”

Fagerberg quoted from the works of St. Augustine and the children’s book, “Velveteen Rabbit.” He told the audience, “The aim of catechists is to put people not only in touch but in communion, in intimacy, with Jesus Christ.”

“Do your catecheses find God bigger?” Fagerberg asked. “If so, they are growing.”

Mass with the Bishop Rhoades

Bishop Kevin Rhoades celebrated Mass with the catechists, beginning by thanking them for their years of service to the Church. During the homily Bishop Rhoades said he was “happy that the Eucharist is the theme today. It is the greatest of all sacraments — ‘the sacrament of sacraments.’”

Bishop Rhoades said the mystery of the Eucharist is lifelong catecheses. “We are called to recognize the greatness of the mystery entrusted to us. Pope John Paul II said the liturgy is never anyone’s private property — it’s not something we created, it’s something we received.”

“This is an awesome gift Jesus left us on the night before he died — there’s no greater gift He could’ve left us,” the bishop said. “He was giving to His Church for all ages His body broken for us, His blood poured out, leaving us the gift of Himself.”

Bishop Rhoades said he wondered how many Catholics have a solid knowledge of the truth of the Eucharist.

“I’m convinced,” he said, “we would not have so many non-practicing Catholics or Catholics leaving the church if they truly understood the Eucharist.”

The bishop also said he hoped all children and teens learned about and experienced the beautiful act of the Catholic faith which is Eucharistic Adoration. He said there was a time when it seemed to fall from use but has increased again over the last decade, probably thanks to Pope John Paul II.

“Of all the devotions, adoring the Eucharist is the most important after the sacraments,” Bishop Rhoades said.

Each year as part of the Catechetical Institute Day, the St. Mother Theodore Guérin Award is presented to a director of religious education or catechist who exemplifies service and leadership. This year the award was given to two recipients.

The first award was presented prior to the event, as the recipient could not be present. Franciscan Sister Marilyn Ellert, director of religious education at the Cathedral of the Immaculate Conception was given the award.

The second recipient was Mary Barnes, teacher at Bishop Dwenger and St. Jude in Fort Wayne. Bishop Rhoades presented the award to Barnes who later said she was “speechless.”

“I think of all the wonderful people we’ve worked with who have given so much to the Church. I’m just grateful to all of them. They were all models to me,” she said.

The catechists had several workshop topics to choose from that addressed working with catechumens of all ages. Topics like, “How to hold ‘em — keeping youth in the game after first Communion.”

Director of Religious Education at St. John the Evangelist in Goshen, Darlene Leitz, led the workshop and discussed ways to keep kids in religious education between the sacraments of Communion and Confirmation.

Leitz said it was a cooperative effort between the catechist, the parents and the pastor to support continuous religious education, but creating a desire in the student by focusing on their personal relationship, fun object lessons and catchy titles to keep them engaged.

Informing the parents of the subjects covered each year between sacramental preparation is also important.

Deacon Jim Kitchens of St. Elizabeth Ann Seton in Fort Wayne led a workshop on “Teaching Adults the Fundamentals of the Faith.” He cited a Georgetown University survey of Catholics about their faith and the practice of their faith and found many Catholics lacking in the fundamentals.

“I think we have much to do,” Kitchens said.

He said the Church is competing with everything — sports, economy, etc. Kitchens believes you have to reach people’s hearts — one example is the Christ Renews His Parish program.

Kitchens shared an exchange between two priests about the program — one said, “That wasn’t very theological” to which the other replied, “You’re right but first you have to capture their hearts and then you can pour in the theology.”

Adult converts going through the RCIA program will have a great understanding of the faith and the sacraments, he said.

“What separates the on fire Catholic Christian from the average Catholic in the pew is the personal belief that their faith is born of relationship,” he said.

Kitchens shared some ideas that were put into practice at his parish — where two years ago they had four participants in the RCIA program and this year they have 33. Kitchens said they decided to do something each month for the parish, some very simple ideas that took off.

One idea that he said he thought was “incredibly silly,” but that the parishioners loved, was the youth group and pastoral staff stood outside holding signs like “Honk if you love Jesus” and “Come on in and see”.

“The people loved it; they went nuts,” he said.

They also set up a welcome center with a TV monitor and some information and had it staffed, handed out holy cards after Mass, had T-shirts made up with the Sacred Heart of Jesus and the name of the parish and gave those away, gave away Valentine cards and kisses, and had a parish monthly book club, for example.

He said the CRHP men’s retreat grew to 19 and outgrew the women’s.

“Once you have their heart we have 2,000 years of great theology — they’d have to live two lifetimes to absorb it all,” Kitchens said.