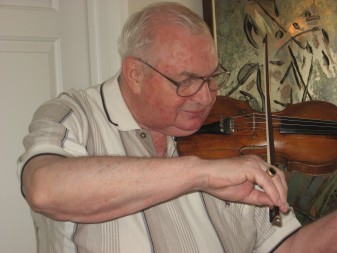 Carl Nadeau, long the first violinist of the Saint Francis College orchestra, often practiced one of his two antique violins at home before heading to the campus.

FORT WAYNE — The University of Saint Francis and the Cathedral of the Immaculate Conception lost a dear and faithful friend last March when Dr. L. Carl Nadeau, after suffering from a long illness, died.

A familiar sight for many years, Nadeau, a resident of Three Rivers Apartments could often be seen walking downtown or on campus with his ever-present umbrella.

Nadeau, a native of Edmunston, New Brunswick, came to Fort Wayne in 1956 to enroll at Indiana Tech for electrical engineering courses. After two years he did not qualify to go further in that field, but already having a B.A. in English and French from St. Louis College in Canada under his belt, he seized an opportunity to teach French for several months at Central Catholic High School, then later at Saint Francis College (now USF) where he taught for 46 years, retiring in February 2009. He was also a longtime violinist in the college orchestra and the proud owner of two valuable antique violins, possibly Stradivarius.

“Carl was a very dedicated and beloved teacher,” said Sister Kriss, who has known him since 1983.

“He enjoyed traveling and his travels would add interest to his teaching French, world literature and English composition at Saint Francis,” she said.

Msgr. Bob Schulte, rector of the Cathedral of the Immaculate Conception, remembers first meeting  Nadeau in 1980. At the time Nadeau was working at the Cathedral Center as vocation director for the diocese.

“Carl served at the altar for 7 a.m. daily Mass, and also as a lector, an extraordinary minister of the Holy Eucharist, choir member and head tour guide for the cathedral,” said  Msgr. Schulte, adding that Nadeau was a very positive person who made the tours enjoyable and inspirational.

“I remember Carl’s enthusiasm in telling me of some Palestinian visitors who were very open to understanding about the Catholic faith on their cathedral tour — Carl loved discussing religion with many various people.

“Our conversations before the morning Mass were profoundly spiritual, often touching on Dante, Church history and Franciscan spirituality that he had received from the sisters at Saint Francis over the years,” he said.

Tom Smith, Nadeau’s close friend and power of attorney, is a retired Fort Wayne Community Schools teacher and principal who served at the daily Masses with Nadeau.

“We had breakfast every morning at Cracker Barrel and occasional lunches at Bob Evans,” said Smith, “and I miss the varied conversations we had. He was a very intelligent man. I know he suffered long and hard through life and I was there for him. He was a strong individual whose infinite belief in God helped him through his physical difficulties.”

An accomplished musician, Nadeau –– in addition to playing in the college orchestra –– also sang in the Cathedral Choir and in the Philharmonic Chorus.

“I would always look for Carl among the other choir or chorus members,” recalled Sister Kriss, adding that Nadeau was always trying to perfect his talent with the violin. Msgr. Schulte noted that Nadeau took violin lessons each Saturday.

“Carl was also very appreciative of the sisters at the university, and would never forget to send flowers, candy or wine, or even all three, at Christmas or Easter for our enjoyment,” said Sister Kriss.

“We met at Trinity Hall in 1967 at a graduate alumni meeting, where we chatted, and the relationship grew from there,” recalled Sullivan, who lunched with Nadeau often and was a pallbearer at the funeral.

“The one word I would use to describe Carl is ‘gracious,’ for he was always considerate of others. I miss my dear friend — his warmth, his smile, and how he made me feel like I was the only focus of his attention. He was also a veritable walking encyclopedia on many subjects, including his fascinating cathedral tours and his travels — just incredible,” said Sullivan.

Sullivan and his wife spent much time with Nadeau, experiencing first-hand Nadeau’s passion for French cuisine and culture, as well as his French heritage.

“Anyone who knew Carl would know how fond he was of his French lineage, spending much time, effort, money and energy, to attempt to connect the links between his family and the French throne,” said Sullivan.

As Sullivan remembers Nadeau as “a very devout man who daily demonstrated his love for God, the Church and his fellow man,” Sister Kriss remembers him for his good sense of humor.

“He was a fun-loving spirit, and he and I would sneak away from time to time to see a movie. I will miss his treating me to a movie and popcorn when I had the time. Carl always seemed to be available for those little excursions,” she said.

As a good and faithful servant, Nadeau led a fascinating and rewarding life; beloved by all he met and influencing the lives of many.