WARSAW, Poland (CNS) – For two months, Poland has been welcoming Ukrainian refugees, and organizers wanted them to be able to celebrate Easter in a special way. So on April 24, Caritas joined with hotels to sponsor an Easter breakfast for more than 20,000 Ukrainians.

Agata Kornhauser-Duda, Poland’s First Lady, joined some of the refugees in Warsaw. “Ukraine will not be left alone. We are together, we are brothers and sisters,” she said.

So Caritas Poland proposed celebrating the Day of Goodness, which included Easter breakfasts, an initiative of Polish Hotel Holding, Poland’s second-largest hotel group and the first backed exclusively by Polish capital. The 45 diocesan branches of Caritas took charge of inviting the Ukrainians. 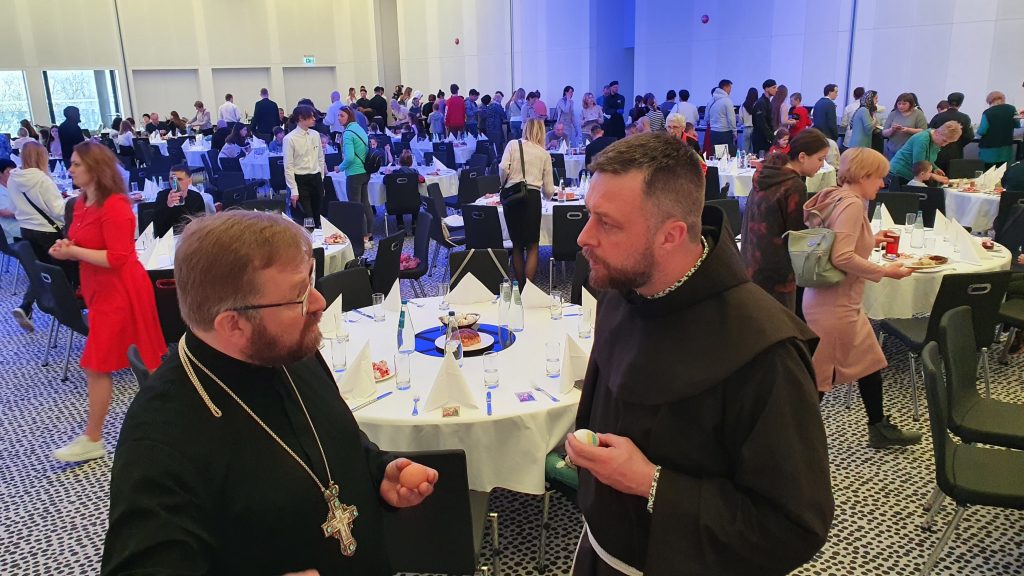 Rev. Mitrat Doroteusz Sawicki, a clergyman of the Orthodox Church, talks with Father Cordian Szwarc, deputy director of Caritas Poland, during an Easter breakfast for Ukrainian refugees in Warsaw, Poland, April 24, 2022. The breakfast was organized by Caritas Poland, Polish Hotel Holding and other Polish hotels for more than 20,000 people from Ukraine. (CNS photo/courtesy Caritas Poland)

“During this event, there were many emotions and tears, but also words of gratitude from our brothers and sisters from Ukraine for the fact that we could celebrate one of the most important holidays in the Orthodox Church with them,” Gheorghe Marian Cristescu, PHH President, told Catholic News Service.

“This Easter holiday is extremely difficult for them because it is the first time they are spending it far from home, and often also without their closest family members. We wanted to be with them at that time to help them experience the first Orthodox Easter in Poland, in a safe and friendly atmosphere,” he said.

Kornhauser-Duda thanked Polish citizens who are supporting Ukrainians, especially Caritas Poland, for their full commitment in many areas. She also thanked Polish Hotel Holding for its quick response and immediate provision of accommodation for guests from Ukraine.

“We all believe – and we pray for it – that Ukraine will win, that Ukraine will emerge victorious from this war. Ukrainians are a proud nation that will do whatever it takes to make Ukraine flourish,” she said. 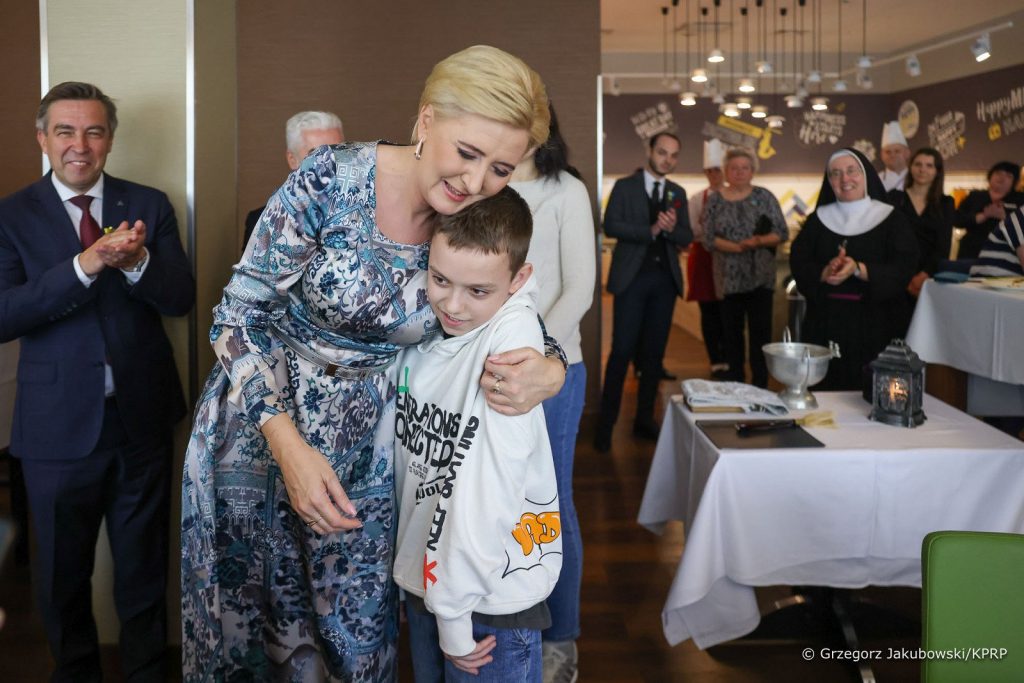 Polish first lady Agata Kornhauser-Duda embraces a boy during an Easter breakfast for Ukrainian refugees in Warsaw, Poland, April 24, 2022. The breakfast was organized by Caritas Poland, Polish Hotel Holding and other Polish hotels for more than 20,000 people from Ukraine. (CNS photo/courtesy Polish Presidency)