The former prefect of the Congregation for the Doctrine of the Faith spoke at the University of Notre Dame Oct. 27, where he stressed the importance of proclaiming the human dignity of every person, from conception until natural death.

Cardinal Gerhard Müller, who was prefect of the CDF from 2012 to 2017, told an audience of Notre Dame faculty, staff and students that this proclamation is particularly necessary in “a secularized society that has surrendered to relativism and thus to the destruction of ethics.”

Life on earth is a “pilgrim state,” he explained, for humans are on a journey toward the ultimate goal of eternal salvation; however, this lofty goal doesn’t mean that they have no responsibility toward the world and the people around them. 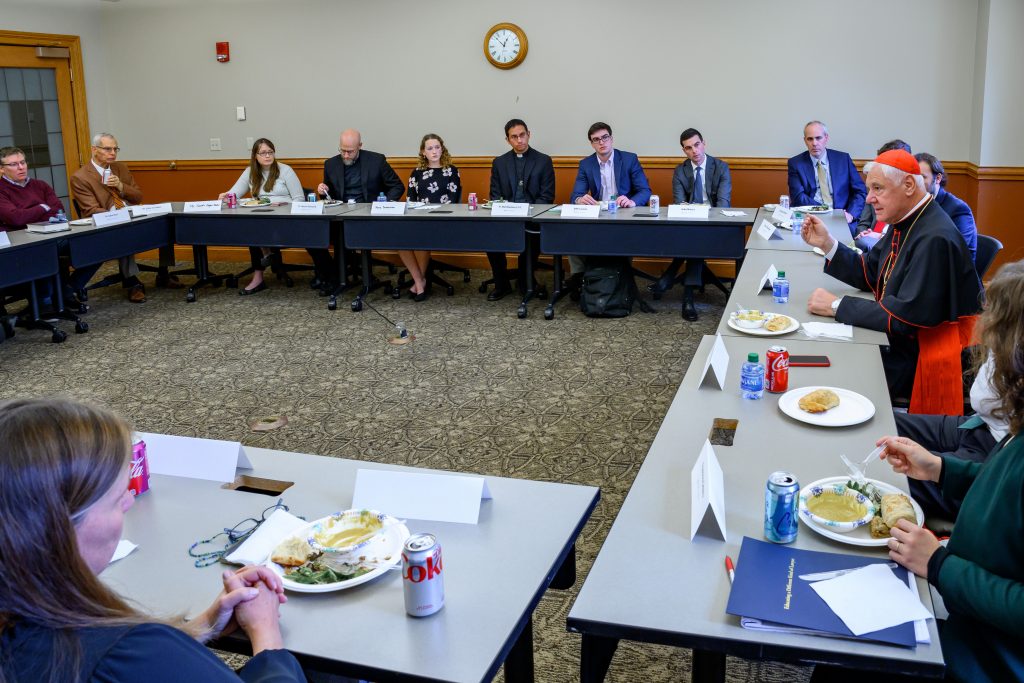 The cardinal meets with the faculty and students over lunch prior to his afternoon talk.

Cardinal Müller cited “Lumen Gentium,” “The Dogmatic Constitution on the Church,” to explain that the two goals of the Church go hand in hand: to bring people to Jesus and to work for “the unity of mankind.” These goals include not only adoration, worship and striving for holiness, but also civic responsibility, care for the earth and working for better living conditions.

To this end, he continued, the Church addresses the moral principles of human action to promote the truth that “every human being exists for its own sake and must never be a means to an end.” Rather, “Humans are individually called by God, adopted as his children and regarded as his friends.”

The popes, over the centuries, “as universal teacher and shepherd of the Church” have led this effort by the Church to be in the world to “illuminate” and “educate” the conscience of people and to speak up about threats to human freedom, equality and the common good, he said, citing various papal encyclicals.

Cardinal Müller observed that one of the greatest challenges of our time is the protection of all human life, and he said that “The Church is the only community that has always risen to the occasion” by emphasizing Catholic social teaching and moral theology principles. 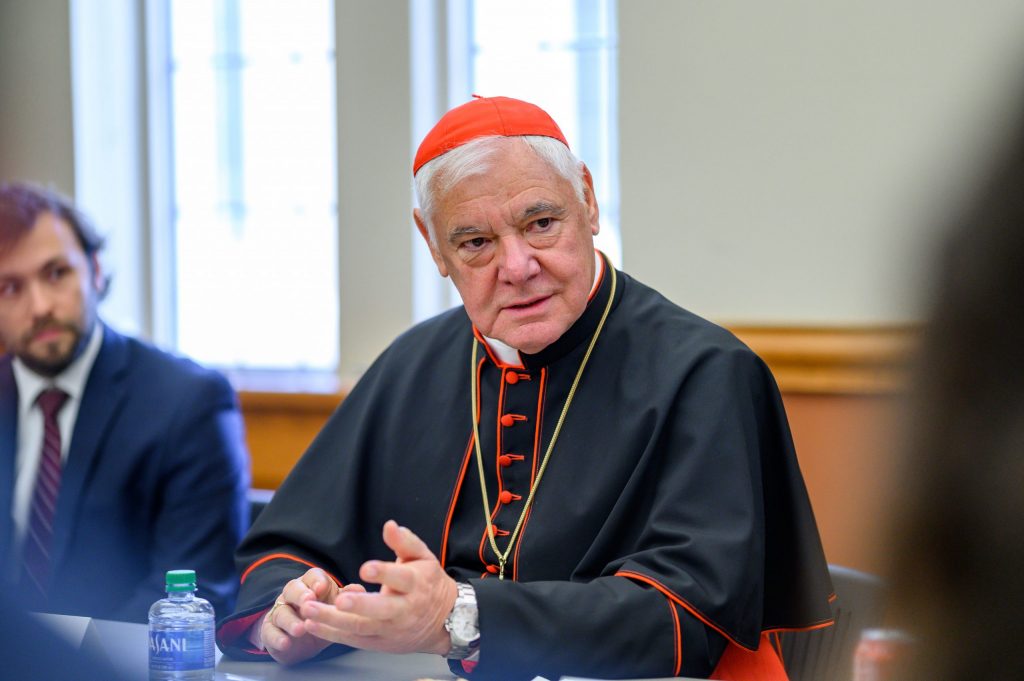 Photos by Matt Cashore/University of Notre Dame
Cardinal Gerhard Müller, prefect of the Congregation for the Doctrine of the Faith from 2012 to 2017, speaks with students and faculty of the University of Notre Dame Oct. 27. He visited the university to give a presentation on his new book, “The Pope: His Mission and His Task.”

The Church should not just passively react to problems, he continued, but rather “All Christian communities can shape the future by emphasizing the vocation of humanity in the story of God’s creation.”

On the other hand, rejecting God degrades humans to a mere biological life form without “objective standards, values and virtues.” The result is a world based on arbitrary decisions that is ever-changing and without hope or love, he said:

“After all, human rights need to be rooted in more than consensus in order to last and be truly universal: They must be based on the recognition of an authority that is beyond the reach of man.”

While people of good will can and should work together to build a more just world, Cardinal Müller stressed that “We can never replace the final goal of human existence: being with God.”

The cardinal’s presentation was co-sponsored by Notre Dame’s Theology Department and by the Religious Liberty Initiate of the Notre Dame Law School.

Cardinal Müller was in the United States on a tour to promote his book, “The Pope: His Mission and His Task” (The Catholic University Press, 2021). The book originally was published in German in 2017; the English version is a translation by Father Brian McNeil.

According to the publisher, the book covers the theological and historical aspects of the papacy and “addresses in particular, those dimensions of the papal office which are crucial for understanding more deeply the pope as a visible principle of the Church’s unity.”