NEW YORK (OSV News) — The death of Pope Emeritus Benedict XVI has brought “a sense of sadness” to the faithful but “also a sense of gratitude … as we thank almighty God for the good shepherd he was,” Cardinal Timothy M. Dolan of New York said in his homily at St. Patrick’s Cathedral on Jan. 1, the Solemnity of Mary, the Holy Mother of God.

The Church is grateful for this “sterling successor of St. Peter who radiated a sense of holiness, theological erudition, and gentle pastoral solicitude, so we miss him,” the cardinal said. “There’s sadness but, boy, do we ever rejoice that we had him and thank God for that.”

At age 95, Pope Benedict “had been with us for quite a while,” Cardinal Dolan said. “We came to know and love and respect him, and we miss him, and we mourn him.”

Before the Mass began, the cathedral bells tolled 95 times in Benedict’s honor. Cardinal Dolan asked all archdiocesan parishes to designate one of their weekend Masses to be celebrated in memory of Pope Benedict.

A portrait of the pontiff, who headed the Catholic Church from 2005 until he retired in 2013, graced the cathedral altar. The congregation that packed the church included many tourists who had been in New York City to watch the traditional Times Square ball drop ushering in the new year. 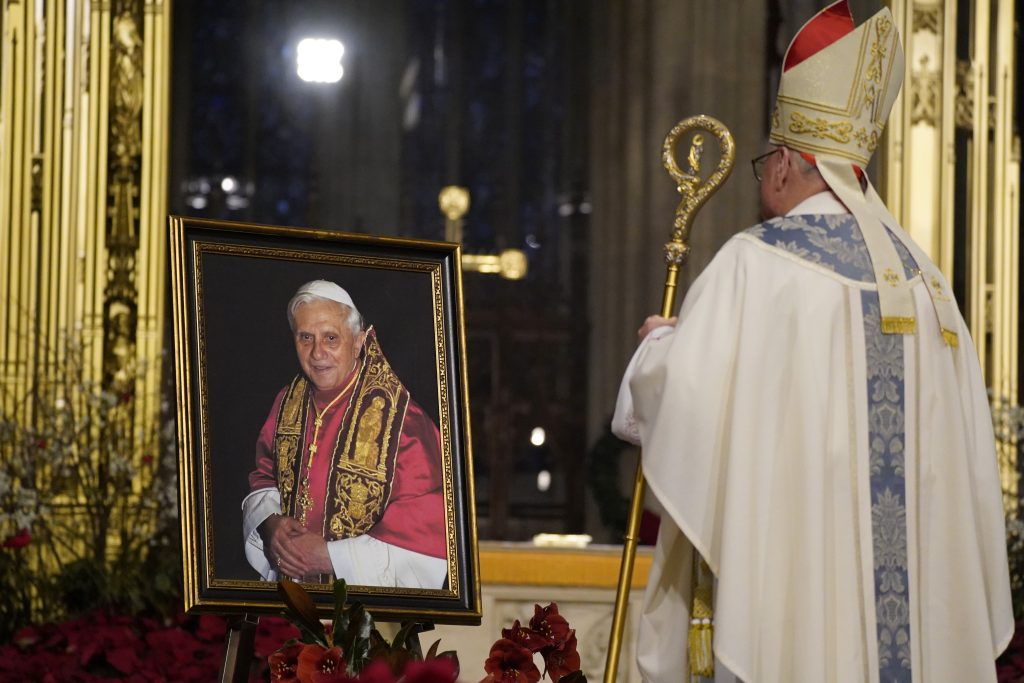 New York Cardinal Timothy M. Dolan pauses in front of a portrait of Pope Benedict XVI while celebrating Mass for the repose of the late pontiff’s soul at St. Patrick’s Cathedral in New York City Jan. 1, 2023. Before the liturgy, the bells of the cathedral tolled 95 times to mark each year of the late pontiff’s life. (OSV News/Gregory A. Shemitz)

Cardinal Dolan began his homily by noting that New Year’s is traditionally a time when everyone reviews the past year.

“Our hearts, I trust, are filled with gratitude for the grace and mercy of the Lord that got us through 2022,” he said. “We acknowledge that there was a share of sadness and sorrow and challenges and trauma in the world, in our country, the city, indeed within our own hearts, and our families and friends.”

In 2023, the cardinal said, there will be “shares of joy and sorrow … but we’re confident just as God sure got us through the old year, He’s going to be there for the new (year).”

He called it a beautiful tradition for the Church to honor Mary under the aspect of her motherhood of Jesus to begin the new year.

“She is a great example of a faithful follower of Jesus, a disciple, not only His mother,” Cardinal Dolan said. “But she had her shares of joys and sorrows. She was there at the happiest occasion in human history when the Messiah, Our Savior, was born at Bethlehem.

“But fast forward 33 years, she was also there at the gloomiest day in human history, that Friday strangely called ‘good’ when the sun hid itself in shame and earth tremored with grief as the Savior of the world died in agony on the cross.”

“Like the year that just passed, the year ahead is probably going to have its Bethlehem moments and its Calvary moments,” he noted.

But Cardinal Dolan said Mary’s example offers good advice to the faithful about how to weather what’s ahead, as if to say, “Stay close to Jesus as I did at Bethlehem and Calvary.”

If we do that, “he’s going to get us through,” the cardinal said.