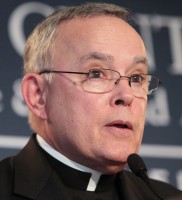 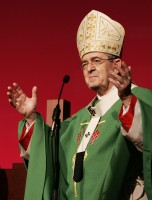 Pope Benedict XVI has accepted the resignation of Philadelphia Cardinal Justin Rigali, 76, who is pictured in a 2006 photo. Archbishop Charles J. Chaput of Denver has been named to succeed him. (CNS Photo/Greg Tarczynski)

In introducing Archbishop Chaput in a news conference at the Archdiocese of Philadelphia offices, Cardinal Rigali also offered an apology “if I have offended” and “for any weaknesses on my part,” but said he saw no particular connection between the timing of the Vatican accepting his resignation and turbulence in the archdiocese over a February grand jury report on how sex abuse cases were handled.

In addition to the announcement about Philadelphia, the pope also accepted the resignation of Bishop J. Kevin Boland of Savannah, Ga., and appointed as his replacement Father Gregory Hartmayer, a Conventual Franciscan priest who currently is pastor of St. John Vianney Parish in Lithia Springs, Ga.

The bishop-designate also was introduced at news conference sponsored by the diocese that morning in Savannah.

The changes in Philadelphia and Savannah were first announced in Washington by Msgr. Jean-Francois Lantheaume, charge d’affaires at the apostolic nunciature in Washington, along with another diocese’s pastoral transition.

Archbishop Chaput is scheduled to be installed as Philadelphia’s new archbishop Sept. 8 at the Cathedral Basilica of Sts. Peter and Paul. Bishop-designate Hartmayer will be ordained as bishop Oct. 18 in Savannah’s Cathedral of St. John the Baptist.

Both retiring prelates are 76, a year past the age at which they are required by canon law to submit their resignations to the Vatican.

Philadelphia news organizations had been speculating that Cardinal Rigali’s resignation was related to public criticism of how the archdiocese has handled clergy sex abuse cases, but he had submitted his resignation when he turned 75 on April 19, 2010, as required under canon law.

In the news conference, Cardinal Rigali explained the timeline of his resignation, saying there was “no particular relationship” between the pope accepting his retirement and events in the archdiocese, saying it was “very, very providential.”

A native of Los Angeles who was ordained for the Los Angeles Archdiocese in 1961, Cardinal Rigali has headed the Archdiocese of Philadelphia since 2003. He previously served as archbishop of St. Louis after a long career in various Vatican posts, most in diplomatic positions. He was named a cardinal in 2003.

The cardinal’s successor, Archbishop Chaput, is a Capuchin Franciscan who was born in Concordia, Kan., Sept. 26, 1944. A member of the Prairie Band Potawatomi Tribe, he was the first Native American to be named an archbishop when he was appointed to Denver in 1997. He had become the second Native American to be made a bishop when he was named to the Diocese of Rapid City, S.D., in 1988.

In the Philadelphia news conference, Archbishop Chaput said he has two Indian names, one from the Potawatomi meaning “he who makes the leaves rustle like the wind” and the other from the Lakota, meaning “good eagle.”

Before becoming a bishop, he held several positions in administration for the Capuchins.

Archbishop Chaput holds a bachelor’s degree in philosophy from St. Fidelis College in Herman, Pa., a master’s degree in religious education from Capuchin College in Washington, and a master’s in theology from the University of San Francisco. Among his recent writings are two books, “Render Unto Caesar,” about Catholic participation in the public square, and “Living the Catholic Faith: Rediscovering the Basics.” He has served on the U.S. Commission on International Religious Freedom, a federal advisory organization.

Among his recent projects and activities were helping found the Catholic Association of Latino Leaders and serving as the apostolic visitor in 2007 for the Vatican’s review of former Australian Bishop William Morris. The bishop of Toowoomba was the subject of lengthy efforts to force his resignation after a decade of conflict with the Vatican, largely over some pastoral practices and Bishop Morris’s statements on married priests and women priests.

Archbishop Chaput’s appointment to Philadelphia comes as the archdiocese is still reeling from a scathing grand jury report released in February. It accused the Philadelphia Archdiocese of failing to stop priests from sexually abusing children even after a previous report had called attention to problems. It said more than three dozen priests with allegations of sexual abuse were still in positions where they could contact children.

At the grand jury’s recommendation, two priests, a layman and a former archdiocesan priest were charged with criminal counts related to abuse of juveniles. Another priest was charged with endangering child welfare for his role in assigning the accused priests.

In response, the Philadelphia Archdiocese among other things has hired a former sex crimes prosecutor to review personnel files of the 37 priests named in the grand jury’s report. Cardinal Rigali also placed 21 priests on administrative leave while allegations against them are reviewed.

In his remarks before introducing Archbishop Chaput, the cardinal did not refer directly to the sex abuse situation, but said “if I have offended anyone, I am sorry” and apologized “for any weaknesses on my part.” Later, in response to questions from the press about whether he had any regrets, he said “we’ve learned so much we didn’t know before,” and that “we see now with greater precision” what might have been done differently. He added that the archdiocese is “very, very committed to assistance for victims.”

For his part, Archbishop Chaput said his transition to leading the Philadelphia Archdiocese was a little like joining a family and that it would take some time to become familiar and adjust to each other.

“I do not know why the Holy Father sent me here,” he said. “No bishop will try harder to help persons who have been hurt by the sins of the past or work harder to strengthen or encourage our priests and to win the hearts of the people.”

He said he needed to read the grand jury reports and spend a lot of time talking to people, including abuse victims and their families, before he could talk about how to fix the problems of the abuse cases. “It’s not my problem, it’s our problem … give me some time,” he said.

In Georgia, retiring Bishop Boland is a native of County Cork, Ireland, who studied for the priesthood in Dublin and came to the United States to be ordained for the Savannah Diocese in 1959. After various parish positions and administrative jobs in the diocese, he was named bishop of Savannah in 1995.

His successor, Bishop-designate Hartmayer is a native of Buffalo, N.Y., who was ordained for the Conventual Franciscans in 1979 after studying at the order’s novitiate in Ellicott City, Md. He holds a bachelor’s degree in philosophy from St. Hyacinth College and Seminary in Massachusetts and three master’s degrees: in divinity from St. Anthony-on-Hudson in Rensselaer, N.Y., in pastoral counseling from Emmanuel College, Boston and in education from Boston College.

Since his ordination, Bishop-designate Hartmayer has worked as a guidance counselor, teacher and principal at schools in Baltimore, various cities in New York and in Florida. He served as pastor at St. Philip Benizi Parish in Jonesboro, Ga., before being named to St. John Vianney in 2010.