VATICAN CITY (CNS) — Three days after the preacher of the papal household called on Catholics to repent for the ways they are dividing the Church, the Vatican secretary of state said the divisions are real and they are harmful.

“Anyone who sees the situation of the Church today has to worry about these things because they are there,” Cardinal Pietro Parolin, secretary of state, told Spain’s Church-owned COPE radio network April 5. “It does a lot of damage to the Church.”

Cardinal Raniero Cantalamessa, preacher of the papal household, had spoken about the divisions in the Church April 2 when he preached at Pope Francis’ Liturgy of the Lord’s Passion. 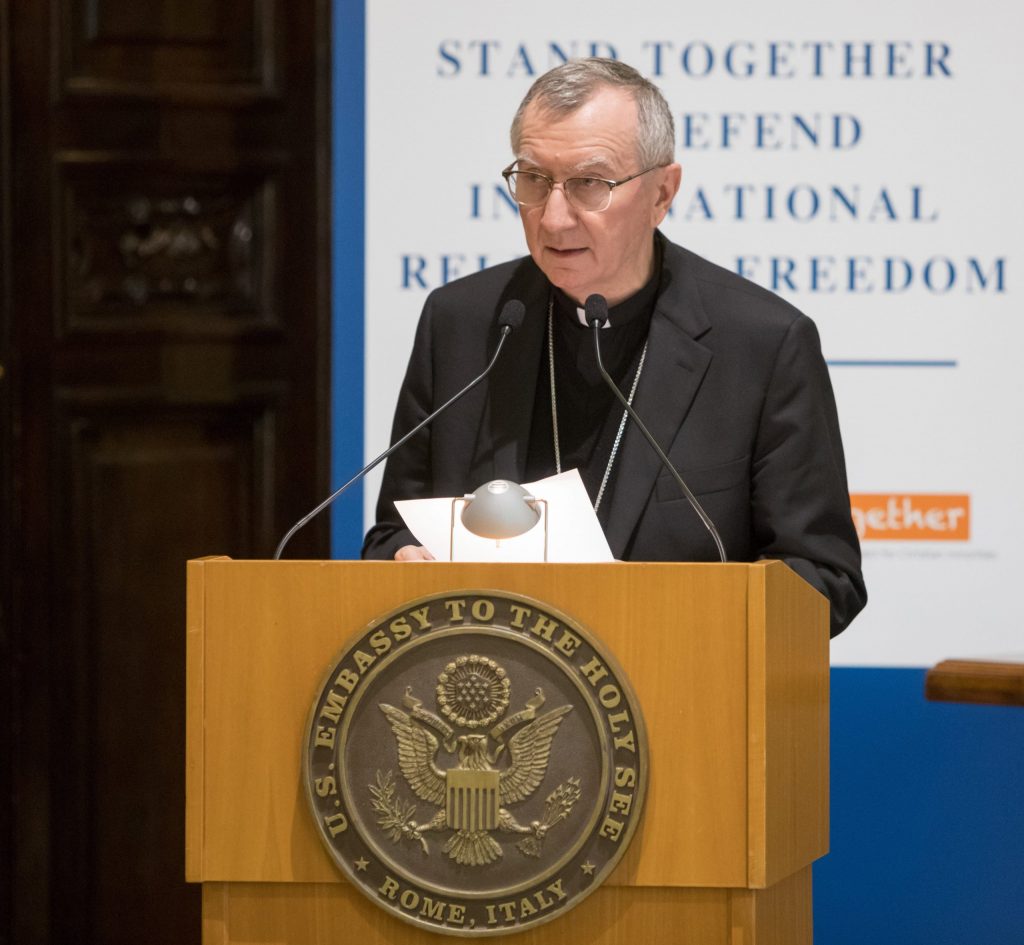 Cardinal Pietro Parolin, Vatican secretary of state, speaks at a symposium on religious freedom hosted by the U.S. Embassy to the Holy See in Rome April 3, 2019. Cardinal Parolin spoke about divisions in the church, the Vatican’s approach to China and other issues in an interview that aired April 5, 2021, on Spain’s COPE radio network. (CNS photo/A.J. Olnes, U.S. Embassy to the Holy See)

Cardinal Parolin told COPE he believes part of the problem “stems from the fact that the pope puts a lot of emphasis on the reform of the Church,” but too many people do not understand the difference between teachings and practices that must remain unchanged and those that can and must be updated and renewed.

“There is a level that cannot be changed, the structure of the Church — the deposit of faith, the sacraments, the apostolic ministry — these are the structural elements,” he said. But because the Church is made up of people who are prone to sin, “there is a whole life of the Church that can be renewed.”

“Sometimes these divisions and these oppositions are born of the confusion of these levels,” he said. “One fails to distinguish between what is essential that cannot change and what is not essential that must be reformed, must change according to the spirit of the Gospel.”

José Luis Restán, COPE’s editorial director, told Cardinal Parolin he would not ask about the Vatican and China’s provisional agreement on the nomination of bishops, which was extended in October, but said he did want to hear the cardinal’s impression of the life of the Catholic Church in China and “what is at stake for the Church in that large and complex country in the future.”

The future “is the perspective from which we should look at this issue,” the cardinal responded. “Certainly, the Church in China is a fundamental part of the Catholic Church, and everything that has been tried and is being tried is to secure this community, which is still small, but which has great strength and vitality.”

The suffering and persecution Catholics in China have endured always must be respected and remembered, he said. But their persistence in the faith must also give the Church hope for the future.

“The steps that have been taken, even if they have not solved all the problems that are still there and that will probably need a long time to resolve, are in the right direction toward a reconciliation within the Church because of this problem of distinctions — it is too much to say of separation — of distinctions” between those who accept a government role in the life of the Church and those who do not, the cardinal said.