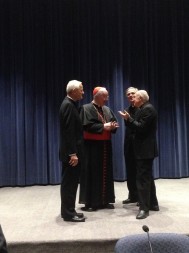 The photo shows from left, Cardinal Donald Wuerl of Washington, D.C., Cardinal Marc Ouellet, Holy Cross Father John I. Jenkins, president of the University of Notre Dame, and Archbishop Carlo Maria Vigano, apostolic nuncio to the United States. Cardinal Marc Ouellet was the keynote speaker at the Symposium on Pastoral Issues in Science and Human Dignity held at the University of Notre Dame on Feb. 12.

NOTRE DAME — “Educating our young people to see further than the stars and deeper than the Internet is the great challenge of today’s educators who must form men and women free of scientistic and fundamentalistic prejudices, capable of promoting the dignity of the human person in the name of faith and reason,” said Cardinal Marc Ouellet in the keynote speech at the Symposium on Pastoral Issues in Science and Human Dignity held at the University of Notre Dame on Feb. 12.

This conference, as stated by the university, “sought to help bishops and their diocesan educational officials explore some of the fundamental theoretical issues in the relationship between science and religion, as well as the practical issues that flow from their interaction.”

The event, which was co-organized by University of Notre Dame Theology Professor and Director of the Institute for Church Life Dr. John C. Cavadini, was introduced by the University of Notre Dame President Holy Cross Father John I. Jenkins, who welcomed everyone to the symposium and then invited Cardinal Donald Wuerl to introduce the keynote speaker, Cardinal Ouellet. In addition to the attendance of several prominent priests and bishops from around the country, including Bishop Kevin C. Rhoades, the Apostolic Nuncio to the United States, Archbishop Carlo Maria Viganò, also attended the symposium.

Cardinal Ouellet’s speech focused on three crucial aspects concerning the debate of faith and reason: the state of the sense of human dignity today, the origins of the anthropological crisis and the ecology of the human person.

Cardinal Ouellet began by indicating, “We have only to examine the argumentation for legislation regarding abortion, research of human embryos, artificial reproduction and genetic manipulation to note the decline of the perception of the sacred character of the human person. We see the progressive imposition of a social and political rhetoric that no longer interprets human dignity on the basis of the profound nature of the person, but rather, on the basis of his conditions of life and states of consciousness.”

Furthermore, Cardinal Ouellet added, “We witness a growing conflict between a religious vision and a secularist, pragmatic vision of human dignity.”

He added that this becomes increasingly problematic when “educational institutions, such as the family, the school and the university, are assaulted by cultural currents in which a technocratic mentality reigns, imposing conditions that make intellectual access to transcendence very difficult. Even if they are protected by religious practice, our contemporaries are so marked by technological imperialism that a fundamental sense for human dignity gradually begins to fade.”

The heart of Cardinal Ouellet’s message dealt with countering the false notion that only empirical, scientifically proven data composes the essence of knowledge and truth. Stemming from the philosophical error of Descartes, which presupposed that “the method of one of the sciences of reality was valid for the whole of reality,” he further concluded “the epistemological break of the subject from the truth of being could lead thinking nowhere but to the prison of our own thoughts and thus to atheism.”

“The current anthropological crisis is then rooted in a positivist concept of nature closed in on itself in the immanence of the cosmos as is typical of the techno-scientific mentality,” the cardinal said.

“The final consequence of this reduction of nature and reason to a positivistic conception of them is nothing less than the negation of man’s humanity,” he said.

In order to find human fulfillment, Cardinal Ouellet explained, “The natural sciences can give us an enormous quantity of useful information about man, but they cannot explain his profound nature, his dignity as a person, his capacity for relation with God and his moral conscience.”

“Man created in the image of God thus encounters the supreme fulfillment of his creaturely aspiration in a ‘communio personarum’ that is both divine and human,” Cardinal Ouellet said. “All of humanity journeys toward this communion, even if most often unconsciously. This ultimate horizon is the secret motivating force behind the human search for happiness as well as humanity’s aspirations for truth and justice. The light of God as the supreme Good attracts and animates us despite the wrong turns, the successes and failures that punctuates the daily lives of persons and peoples.”

Again, quoting “Caritas in Veritate,” Cardinal Ouellet remarked: “The Church must also protect man from self-destruction. What is needed is something like a human ecology, correctly understood. If the Church speaks of the nature of the human being as man and woman, and demands that this order of creation be respected, this is not some antiquated metaphysics. What is involved here is faith in the Creator and a readiness to listen to the language of creation.” Cardinal Ouellet succinctly conveyed that “no method and no scientific discovery can eliminate the question of being, the question of God and the question of the human person.”

In order to apply this philological thought to practical action, Cardinal Ouellet suggested, “We need seriously to examine our methods of education to see whether the sum of scientific knowledge offered to young people is completed and offset by a sufficient exploration of reality with other methods and projects, which encourage contact with nature, religious meditation, contemplation, aesthetic experience, philosophy and friendship; everything that cultivates a respect for human dignity. Without such an educational effort, which requires a difficult conversion that runs contrary to the demands of technical performance, humanity risks riding the wave of an aimless globalization into the abyss, even after the tragedies of the 20th century. Our cultural environment is dominated by omnipresent technological products and motivated by a spirit of consumption as insatiable as it is unsatisfying.”

Cardinal Ouellet concluded his thoughts by indicating “in order to move beyond scientific and technological imperialism we must affirm the transcendence of the human person, who can never be reduced to a means with the view to an end. His ultimate end is God, who inscribed in His rational nature, the foundations of His capacity to distinguish good and evil and to discern authentic ethical values. This metaphysical conviction ought to correct the scientistic mentality, that as Pope John Paul II remarks in ‘Fides et ratio,’ ‘has succeeded in leading many to think that if something is technically possible it is therefore morally admissible.’ We must then, reestablish a balance proposing, ‘a philosophy of genuinely metaphysical range, capable, that is, of transcending empirical data in order to attain something absolute, ultimate and foundational in its search for truth.’”