Yes and no, seems to be the answer, depending on where they go to school, but this could change after the Oct. 13 canonization of the British theologian and intellectual so tied in with university life.

Newman centers, located on the campuses of many public universities, get their name and their role from the cardinal who died in 1890 and emphasized that Catholic students who attend public universities must be given a place to gather to support and encourage one another in their faith. 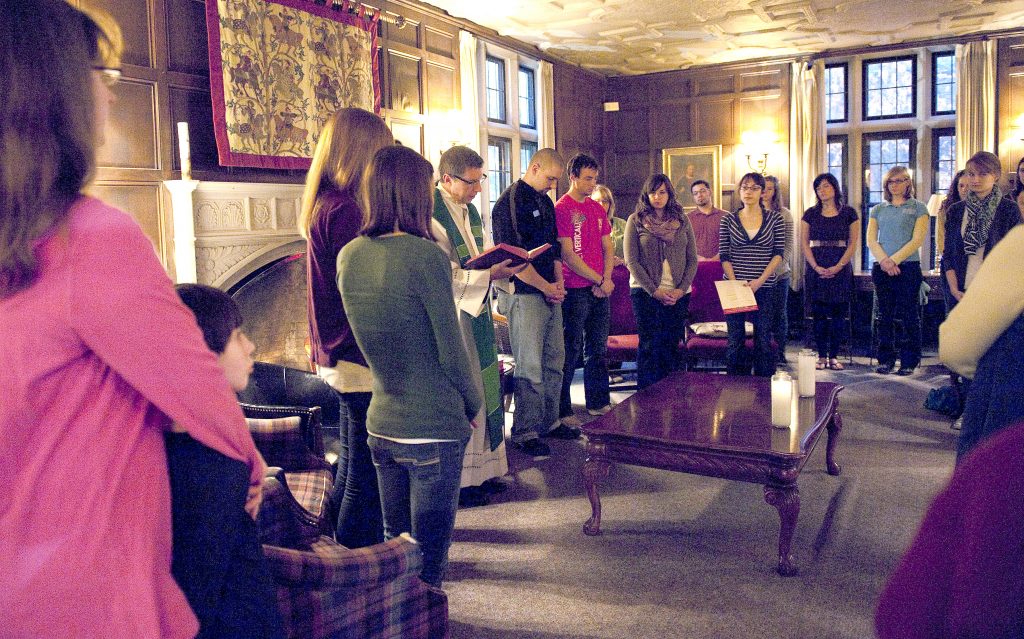 A priest celebrates Mass for students and faculty Jan. 31, 2012, in the Catholic Student Center at Washington University in St. Louis. Many college Catholic student centers and Newman University in Wichita, Kan., will be celebrating Cardinal Newman’s Oct. 13, 2019, canonization with lectures, watch parties and pilgrimages to Rome for the event.(CNS photo/Lisa Johnston, St. Louis Review)

Many university-based Catholic student groups no longer call themselves Newman Centers but instead go by terms like Catholic associations, Catholic student organizations or campus Catholic communities, possibly because students lack knowledge about Cardinal Newman, who has taken a bit of a back seat.

Barbara McCrabb, assistant director for higher education at the Secretariat of Catholic Education of the U.S. Conference of Catholic Bishops, said Cardinal Newman’s canonization is an “opportunity for campus ministry to reclaim some of its roots” by reintroducing the saint she described as a Renaissance man, with concern for prayer, immigrants and the poor, to today’s college students.

“All of what Cardinal Newman was talking about and hoping for has resonance today,” she added, urging again that campus ministry “reclaim and rekindle its intellectual past” in telling the story of the new saint, who embraced the link between faith and reason and wanted laypeople to have a clear understanding of their faith that they could explain to others. 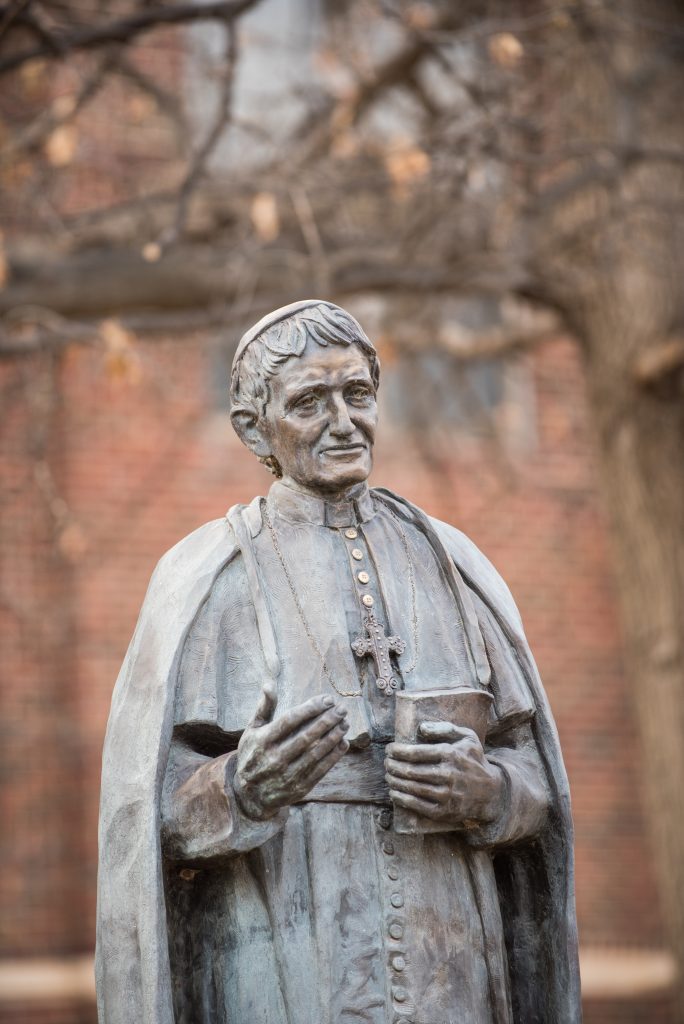 A statue of Blessed John Henry Newman is seen Feb. 5, 2018, on the campus of Newman University in Wichita, Kan. Many college Catholic student centers and Newman University, will be celebrating Cardinal Newman’s Oct. 13, 2019, canonization with lectures, watch parties and pilgrimages to Rome for the event. (CNS photo/courtesy Newman University)

When Cardinal Newman was beatified in 2010 by Pope Benedict XVI, a director of campus ministry at the University of Wisconsin in Madison said the cardinal’s influence was more on campus ministry leaders today than the students themselves. In part, it’s because “it’s a rare student who would pick up ‘Grammar of Assent’ (one of the cardinal’s books) and get excited about Cardinal Newman,” said Father Eric Nielsen, who was, and still is, director of St. Paul’s University Catholic Center on campus.

At the time, he said he hoped sainthood was not far off for the cardinal as that would raise his profile even more and likely promote his writings to college students. But in the meantime, he said, campus ministry leaders should continue to take up the cardinal’s challenge to help students integrate faith and intellectual study and ultimately “bring Christ to the world.”

That’s the challenge that motivates Father Gary Braun, who has been director of the Catholic Student Center at Washington University in St. Louis for nearly 30 years. He said the campus ministry program is not just about keeping the participating students “over here” but “catapulting them back across the street healthier, happier, holier so they can impact the culture for the better there.”

The priest said the center’s sign outside the building includes the words “Newman Community” and he said students are often curious about it because most of them have never heard of Cardinal Newman in their parishes or even Catholic high schools.

Their curiosity brings about “a great opportunity to talk about him as a brilliant man and priest, his conversion story, his struggle to put his faith together with what they are learning in the university,” he told Catholic News Service by email.

This discussion leads to inevitable dialogue about Cardinal Newman’s impact on the whole idea of a university and his understanding of a church that both can change and cannot change.

One student who went through this Catholic student center was Melissa Villalobos of Chicago. Her 2013 healing, which saved her life and the life of her unborn child, was accepted by the Vatican this year as the miracle needed for Cardinal Newman’s canonization.

Background material about Villalobos on the website of the London Oratories, which include the Oratory in Birmingham founded by Cardinal Newman, says that when Villalobos first came across the Newman Center at Washington University, she assumed it was named after a rich benefactor.

When she learned more about him even years later, particularly after his 2010 beatification, she developed a devotion to the British scholar, philosopher and writer. Her husband gave her holy cards of Cardinal Newman, and she prayed to him for small family needs and then a more urgent request, which ultimately moved up his canonization.

Being part of a student center with Newman in the name is not a guarantee that students will know who he is, but students at Penn Catholic Newman Community, part of the first Newman Club founded in the United States in 1893, have definitely picked up on his main ideas, said Patrick Travers, director of the Newman Apostolate for the University of Pennsylvania, and a member of the movement Sodalitium Christianae Vitae.

Travers said even though students might at first confuse Cardinal Newman with local Philadelphia saint St. John Neumann, they pick up the cardinal’s motto, “Heart speaks to heart,” because it is an integral part of the campus ministry.

The idea, he told CNS Sept. 19, is “God’s heart speaks to our hearts, but then the invitation is to share our hearts to others.”

Travers said this is especially key at Penn where “everyone is from the top of their class when they get here and they think that they have to be the best but they eventually hit a wall” which is something the Newman center, through its small groups, works to change by encouraging students to let barriers down and trust each other.

Those group discussions with fellow Catholic students also has made the difference for Hailey Rose Thayer, a junior biology education major at the University of Evansville, Indiana, who will be reading a petition at a prayer vigil for Cardinal Newman in Rome the night before his canonization.

In an email to CNS, Thayer said the Newman Center has changed her life, particularly its community aspect “because these are the people we see at Sunday Mass and our weekly dinner and discussions” that go on until late at night.

“During these late nights, we discuss God in our lives and what that means to us,” she said, adding that they talk about where they have seen God and where they have struggled or done well. “In these precious moments, I feel that Newman’s vision for the centers on college campuses has been carried out.”

Her takeaway about Cardinal Newman is that he felt “universities should focus on more than just academics” and that one’s studies “should amount to more than just facts on a page, but to an appreciation of God’s design and an understanding of the universe on a greater scale.”

Father Robert Lampitt, head chaplain at St John’s Catholic Newman Center at the University of Illinois at Urbana-Champaign, where he was involved as a student before graduating in 2002, similarly appreciates Cardinal Newman’s faith and intellect connection finding a home on the college campus.

“The patronage of Cardinal Newman is a constant reminder that one can be a stout intellectual as well as a saint,” he said in an email, adding that he is grateful to be part of “a robust Newman Center which stands proudly in the center of campus reminding everyone that faith, too, is an integral part of the human experience.”