ROME (CNS) —Ten months after Pope Francis inducted him into the College of Cardinals, Cardinal Wilton D. Gregory of Washington took possession of his titular church in Rome, the Church of the Immaculate Conception of Mary in the Grottarossa neighborhood of northern Rome.

Greeting parishioners Sept. 27, Cardinal Gregory noted how Mary, under the title of the Immaculate Conception, is also the patroness of the Catholic Church in the United States.

“Whenever I recall Our Lady’s title, I will be united with you and your families and clergy in prayer,” he promised them, reading his text in Italian. “I also hope that you will remember me and the Archdiocese of Washington in your prayers, as we are now joined in devotion and affection through the intercession of her whose son established the church as one family of faith, hope and love.”

Cardinals are symbolically priests of the Diocese of Rome, so they are given titular churches in the city, following the practice of ancient times when cardinals were pastors of Rome parishes. 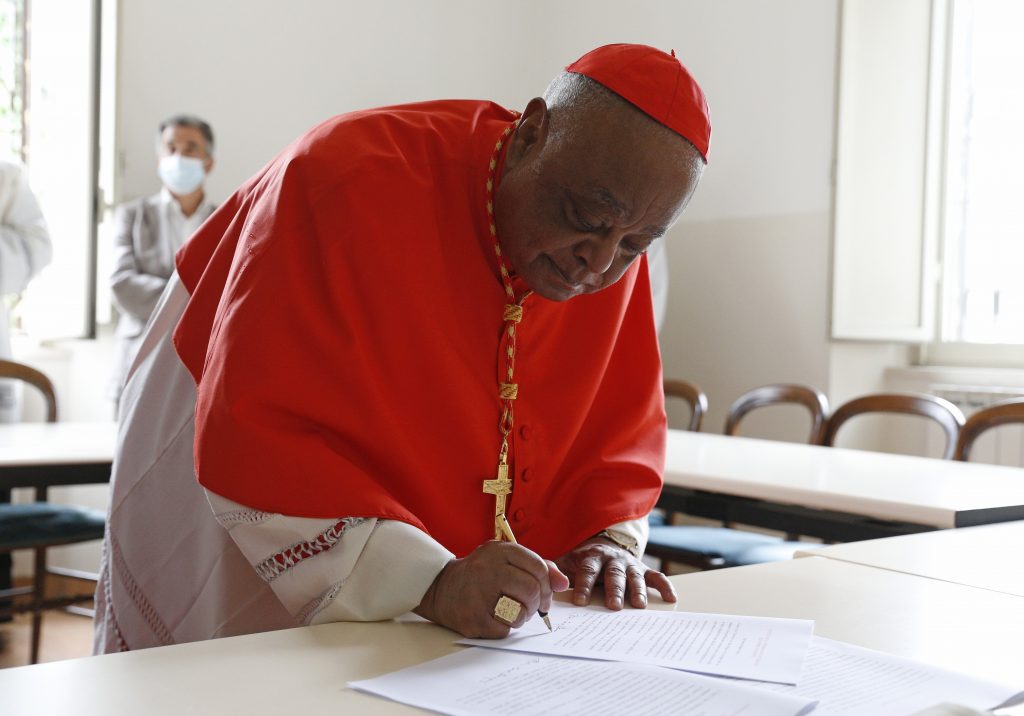 Cardinal Wilton D. Gregory of Washington signs documents recording his taking possession of his titular Church of the Immaculate Conception of Mary in the Grottarossa neighborhood of northern Rome Sept. 27, 2021. (CNS photo/Paul Haring)

Anna Maria Giuliano, one of the parishioners present for the midday prayer service and reception, said having a cardinal associated with the parish on the outskirts of Rome “is very important, especially for this parish, which is like a little family.”

The fact that the United States and the Grottarossa parish both are dedicated to the Immaculate Conception, she said, “is something that binds us even more.”

Cardinal Gregory does not know exactly how he might help the parishioners, other than with his prayers and an occasional visit.

Father Valerio Bortolotti, the pastor, welcomed the cardinal to “this little church in the middle of nowhere on the periphery of Rome” more than 4,000 miles from Washington.

“A precious treasure is hidden here,” the priest said, since the church is near the site where legend holds that the Emperor Constantine had a vision of a cross in the sky and began his conversion to Christianity. And, he said, the church itself was the gift of a wealthy landowner who wanted the people who worked his land or labored in his brick factory to be under the protection of Mary.

“A cross and a mother — this is the treasure you take possession of today,” Father Bortolotti told Cardinal Gregory.

Cardinal Gregory’s titular church on the ancient Via Flaminia was built in 1935 — a very new parish compared to most of the other cardinals’ churches.

Until 1958, there were only 70 cardinals in the world. As the number of cardinals increased — there were 217 as of Sept. 27 — the popes gave more Rome parishes the distinction of being a cardinal’s titular church. Immaculate Conception was given the honor by St. John Paul II in 1985; the parish has the Latin-language document saying such a “dignity” for the little church was well-deserved because of the community’s reputation among parishes of the city.