WASHINGTON, D.C. (CNS) — Ten months after a marble statue of Our Lady of Fatima in the Rosary Walk and Garden outside the Basilica of the National Shrine of the Immaculate Conception was vandalized and destroyed beyond repair, a replacement statue was blessed on Oct. 23 by Washington, D.C. Cardinal Wilton D. Gregory.

“We have gathered here in joy for the solemn blessing of this image of the Blessed Virgin Mary,” the cardinal said, praying that those who honor Mary “be of one mind with Christ and trace in their hearts the pattern of Mary’s holiness.”

“May they search for peace, strive for justice, and realize your love, as they pursue their journey through life toward your heavenly city, where the Blessed Virgin Mary intercedes as mother and reigns as queen,” the cardinal prayed. 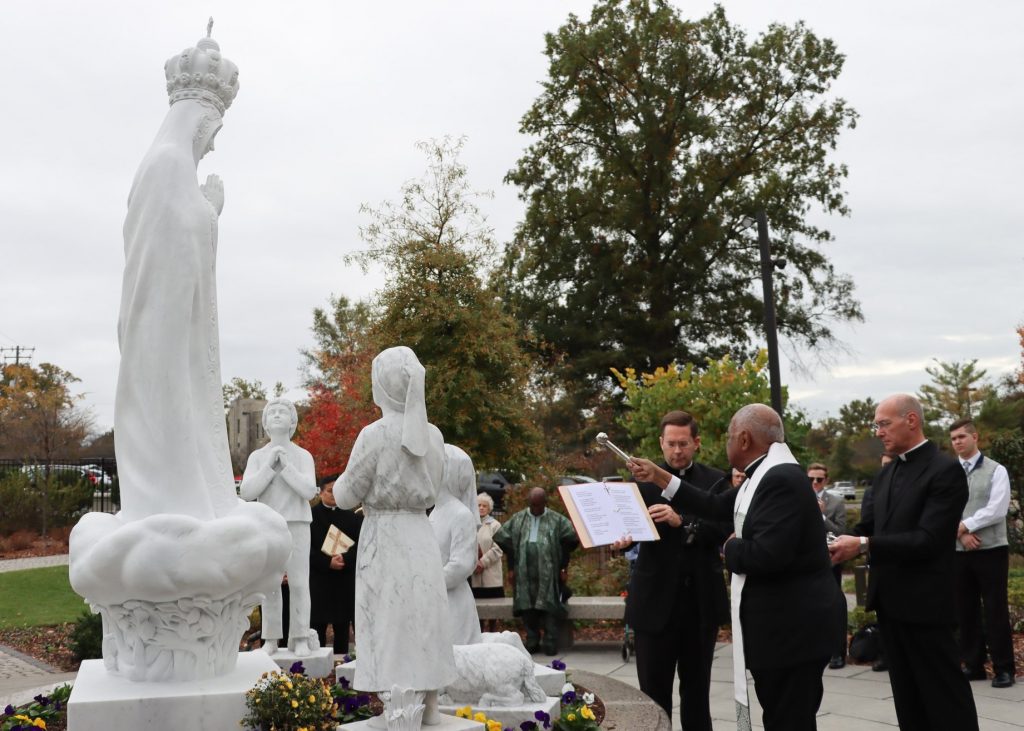 Washington Cardinal Wilton D. Gregory blesses a new statue of Our Lady of Fatima at the Rosary Walk and Garden outside the Basilica of the National Shrine of the Immaculate Conception Oct. 23, 2022. The new statue replaces one that had been vandalized in December 2021. (CNS photo/Javier Diaz, Catholic Standard)

The new statue is an exact duplicate of the original statue that was vandalized on Dec. 6, 2021. National Shrine security camera footage recorded a man climbing the garden’s locked fence and attacking the statue with a hammer after cutting off the statue’s hands.

Msgr. Walter Rossi, Rector of the National Shrine, noted that the replacement statue was carved following the exact specifications of the original, which could not be repaired after the attack. “Her hands were cut off, her nose and face were disfigured, and her crown was destroyed,” he said.

Prior to the blessing, the priest led about 50 people who had gathered at the statue in praying the rosary. Among those in attendance were Newt Gingrich, former Speaker of the U.S. House of Representatives, and his wife, Callista, the former U.S. Ambassador to the Vatican.

The Rosary Garden was completed in 2017, the 100th anniversary of Mary’s appearances to three shepherd children at Fatima, Portugal. The centerpiece of the garden includes the statue of Mary with the three visionaries — Lucia dos Santos and her cousins, St. Jacinta and St. Francisco Marto — kneeling in prayer before her.

The garden also includes a life-size marble crucifix and mosaics illustrating the joyful, sorrowful, glorious, and luminous mysteries of the rosary.

In the past year, there have been multiple incidents of vandalism to Catholic properties in the Archdiocese of Washington.

In October of 2021, a swastika was found painted on a pillar at the parking lot of Annunciation Catholic Church in Northwest Washington.

In August of this year, St. Anthony Catholic School, located in the same Washington Brookland neighborhood as National Shrine, was vandalized twice in less than a week.

The school’s statue of St. Anthony was toppled and decapitated and benches were pulled up from the school playground, and later the principal’s office was ransacked, with a statue of the Blessed Mother and one of St. Joseph destroyed, along with Advent candles.

Also in August, vandals broke a window pane at another local Catholic church and put a running hose through it, covering the vestibule with water.

In July, multiple fires were set inside St. Jane Frances de Chantal Church in the Washington suburb of Bethesda, Maryland. The Stations of the Cross were also taken down from the walls and the tabernacle was broken open. Local firefighters immediately extinguished those fires, which damaged some pews.