Once a month on a Friday evening, after finishing their jobs and saying goodbye to their children, a group of about a dozen men — many with their wives along — gather at Lindenwood Retreat and Conference Center for Spanish-language continuing education in the Diaconate Formation Program.

Their education starts Friday evening and continues all day on Saturday. The men are in the third year of the four-year diaconate program — the first to be held in Spanish in the Diocese of Fort Wayne-South Bend.

During the February weekend, Peter Casarella, a professor of theology at Notre Dame, instructed about the sacraments. He began Friday night’s lesson by talking about how the Hispanic culture relates to the sacraments, as well as the sacramentals that are important to those of Latino heritage. 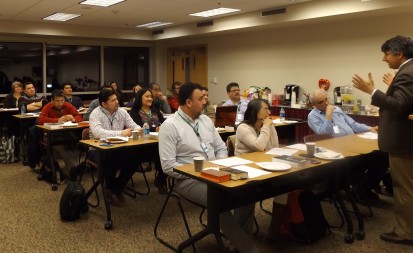 Candidates in the Hispanic Diaconate Formation Program and their wives listen intently to the teaching of Notre Dame Professor Peter Casarella during a Friday-night session of classes held at Lindenwood Retreat and Conference Center.

During his presentation, Casarella utilized “Language of Worship” (“El Lenguaje de la liturgia”) by Dora Tobar. He said that along with language, art and music are also expressions of faith and heritage. He told the candidates that before they start to study the sacraments they have to understand this “language of the heart.” 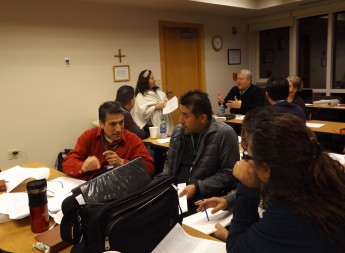 The candidates break off into small groups during the session to discuss quinceñeras.

The group also discussed the prevalence of consumerism versus what God wants for us; at which point Huberto Vasquez held up the example of the Amish. Casarella responded that even the Amish have challenges, and said, “We need to be bridges, not walls. If we isolate ourselves, how can we be bridges?”

During a break, Vasquez, of St. Patrick Church in Fort Wayne, spoke to Today’s Catholic about the journey toward the diaconate. Huberto and his wife, Virervia, have four children aged 14, 12, 10 and 2 years. The 2-year-old was not even born when he began his formation.

He admitted it’s ‘hard sometimes’ to stay committed, because his children demand a lot of time — then there’s his job and other family commitments.

“Some days I wish there were more hours in the day, but God always gives me the grace to continue — and my wife and kids are very supportive,” he said.

Huberto said he’s been learning a lot about the teachings of the church, but also about the great need that exists in the community. He said his home parish is a large one, with three communities —English, Vietnamese and Spanish.

“Since day one, everyone knew me and Victor (Sandoval) were doing this and they’ve given us a great deal of support and prayer,” he said. “Every time they see me and us, they say they’re praying for us.”

Vasquez added that since this is the first diaconate formation in Spanish it has definitely garnered interest; not only in Fort Wayne, but also at other parishes that have Spanish Masses.

He said his children are supportive, and always ask when he’ll be ordained. He said one son has expressed an interest in becoming a priest. His children always tell him to have a good class when he leaves and ask about it when he comes home.

“We have fun together as a family,” he said. “I miss them when I’m gone for the weekend, but it’s worth it.”

Juan Campos from St. Patrick Church in Ligonier, and his wife, Martha, also have four children, ages 22, 21, 14 and 4. He also spoke of feeling challenged by meeting the needs of his family, job and studies. He said his youngest child wants to be with him all the time when he is home. Campos does his best to divide his time and makes sure he sets Sundays and Mondays aside as family days.

He’s grown a lot through the process, especially by praying the Liturgy of the Hours; and in personal prayer, and has shared that growth with his family.

At the beginning he admitted it was hard sometimes to get the family together to pray at meals and at bedtime.

“Now it’s become a need — It has brought the whole family closer in prayer,” Campos said.

He likes the spiritual service, not just at the altar but also outside the church, with people in need. He said he feels a special calling towards the sick. Thirty years ago he was a seminarian, and even though he left the seminary a part of that desire stayed. So when the opportunity for deacon formation came up he decided to take the ‘re-call’ that he didn’t take so seriously the first time. He said believes people see him as a bridge between them and the priest.

Saturday morning began with 7 a.m. prayers and Mass in the chapel, celebrated by Father Wilson Corzo of St. Patrick, Ligonier. Prior to the Mass one of the men led the group in prayer, as another had done the night before.

During his homily Father Corzo told the candidates that their ordination is not the end of their work. He advised them to heed the words of Pope Francis, who said not to exalt ourselves but to strive to do God’s work with humility. He also challenged them to participate more in the singing during Mass, because as deacons they have to lead the congregation and cannot count on the choir, because sometimes there isn’t one. He said they need to be excited to praise God in word and song, because it is all-important. His words inspired the men to sing an extra song together after the end of Mass.

At breakfast, Marco Castillo of Our Lady of Guadalupe, Warsaw, said through formation his faith has matured. He’s become more motivated in all aspects of his life; as a husband, a father and at work. He and his wife Maria, who accompanied him, have a 17-year old daughter. He said sometimes it’s not easy to take care of all his commitments; his daughter will be graduating high school the same time as his ordination. But he is motivated and as a couple and as a family he wants to be a good example of Christian family life.

Castillo said he hoped his parish could see the growth in him, and he believes some are more motivated to serve the church or to look into the diaconate formation program.  He said his relationship with his wife and his daughter are blossoming as the fruits of this labor, and more trust is developing between them.

Saturday’s class time was also about the sacraments, using the Catechism of the Catholic Church as a reference.

Candidate Fred Everett and his wife Lisa have seven children, ages 14-28, and two living grandchildren. They attend Corpus Christi in South Bend. When asked what the kids thought of his becoming a deacon, Everett laughed and said, “Funny thing — one day out of the blue my youngest said, ‘Dad, you should become a deacon.’” They’ve all been supportive.”

“Every once in a while you’re able to have an interaction where you can show mercy,” he said, “And it has deepened my prayer life, because as a deacon you promise to pray the Liturgy of the Hours and pray for the people of God.”

Everett pointed out that the word “deacon” is derived from the Greek word “diakoneo,” which means to serve and Jesus called us to serve.

Giovani Muñoz, from St. John the Evangelist, Goshen, has three children, ages 7, 6 and 5, with his wife, Virginia. He said his children are excited for him because they think it’s like college, which he told them he didn’t have an opportunity to attend. Muñoz said he’s at the point in formation where he’s seeing the big picture and it reminded him of when he was in marriage preparation classes.

He had a lot of emotion upon beginning the program; he was excited, but also a little afraid and admitted that’s how he’s feeling now. “I want to be a witness. I don’t want to do anything that can cause someone to lose their faith,” he said. “But at the same time, I trust that God has called me to this and I need to be humble and ask for prayers.”

“I’m very thankful to Bishop D’Arcy and Bishop Rhoades that they thought of the Hispanic community,” said Vasquez. This is a great gift, and they saw the need. I just hope and pray God gets us through.”

Those wanting more information about the diaconate program can visit the website www.diocesefwsb.org/Permanent-Diaconate.