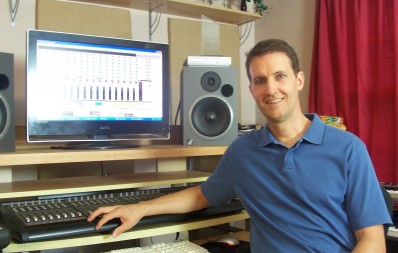 David Smith of St. John the Baptist Parish, Fort Wayne, collaborated with the writing of “Called to Glory,” which was selected as the anthem for the National Catholic Youth Conference to be held in Indianapolis this year Nov. 17-19. Information about the conference is available at http://ncyc.nfcym.org/. Smith is shown in his Fort Wayne recording studio where “Called to Glory” was recorded.

WASHINGTON (CNS) — A University of Dayton campus minister hopes his original song, “Called to Glory,” will help recruit youths to follow the Gospel call of love and service at the 2011 National Catholic Youth Conference.

The song by Nick Cardilino, who has been campus minister and director of the Ohio Catholic university’s Center for Social Concern for 20 years, will be the anthem for the Nov. 17-19 event in Indianapolis. It’s the second winning song he has penned for the national gathering. Cardilino’s song “Discover the Way” was played for the 2007 conference.

“When I write a song, I want two things to happen,” he said. “First, to deepen people’s relationship with God, and this (new) song in particular helps people to grow to understand what God is expecting of them. The second is I hope my song encourages people to think of how they live their lives according to the Gospel call; to love and serve others.”

This year’s anthem was written to fit the daily subthemes and Bible passages for each day of the youth conference, focusing on the call to love one another.

“Called to Glory,” co-written with David C. Smith of St. John the Baptist Parish in Fort Wayne and Sean Clive, was produced and submitted in two versions — as an upbeat rock anthem and as a more reflective prayer that could be used for the Masses.

“The students love singing, clapping, shouting and swaying their hands to an up-tempo theme song, but a more meditative approach works during prayer,” said Cardilino in a statement released by the University of Dayton shortly after the song was chosen last October.

Originally, Smith came up with the idea for “Discover the Way,” and decided to use the strategy again this year.

Smith, who worked with Cardilino on the winning theme song for the 2007 conference, wanted to try again for the 2011 song competition because, “it was so much fun the first time. The whole experience of a whole stadium of people singing your song!”

Smith, who recently spoke with Today’s Catholic, wrote the music for this year’s theme and collaborated with Cardilino on the lyrics.

The song was recorded and produced in Smith’s own recording studio, Icon Studio Productions in Fort Wayne.

When Smith was notified that “Called to Glory” had been chosen he said, “NCYC tells us that’s the first time any songwriter(s) have won twice in the history of that competition.”

“It feels wonderful to be able to contribute to the life of the Church through music in this way,” he added with enthusiasm.

Cardilino gave a preview of his work with a live performance in December at the National Conference on Catholic Youth Ministry in New Orleans. He said in an interview with Catholic News Service on Feb. 3 the house bands that played the song were phenomenal and he received a great response.

“It’s amazing that God would use someone like me to help these kids have a real spiritual experience through song,” said Cardilino.

He plans to attend the 2011 conference but instead of performing on stage, as he did in 2007, he will be in the congregation with the youths while high school students perform his song to kick off the gathering. This year no professional bands will be playing so the focal point will remain on the students.

When asked if he had any plans to compete for a third anthem, he replied, “We don’t have any plans, so we will see how the spirit moves us.”

Cardilino hopes “Called to Glory” will be published and someday be included in a hymnal for church services. Smith and Cardilino’s “Discover the Way” has been published already by ‘Spirit and Song,’ the contemporary music division of OCP, a Portland, Ore.-based nonprofit publisher of liturgical music and worship resources. He also has produced four CDs that are available for purchase at www.nickcardilino.com or through iTunes.

The “Called to Grace” promotional DVD for the National Catholic Youth Conference is now available and can be heard in both of Cardilino’s versions at www.wix.com/koolkikiland/ncycthemesong.

The biennial National Catholic Youth Conference is sponsored by the National Federation for Catholic Youth Ministry, a nonprofit organization that describes itself as an advocate for the needs of young people and promotes the role of the Church and the Gospel in their lives.