Fifty-nine young people from 18 parishes grew in their Catholic faith, and had the usual kinds of summer camp fun, at this year’s Catholic Youth Summer Camp June 25-30.

The seventh annual camp was for children in grades four through six, and took place at Camp Lutherwald in Howe. Dave and Jan Torma from St. Jude Parish, South Bend, served as camp directors.

Along with St. Jude, Sacred Heart of Jesus Parish in Lakeville and St. Vincent de Paul in Fort Wayne were sponsoring parishes.

The theme for this year’s camp was “Soul Praise,” based on Luke 1:46-47: “My soul proclaims the greatness of the Lord; my spirit rejoices in God, my Savior.” “We wanted them to have a deeper awareness and appreciation that we all have souls, and we can cultivate our souls through prayer and the sacraments,” said Jan. 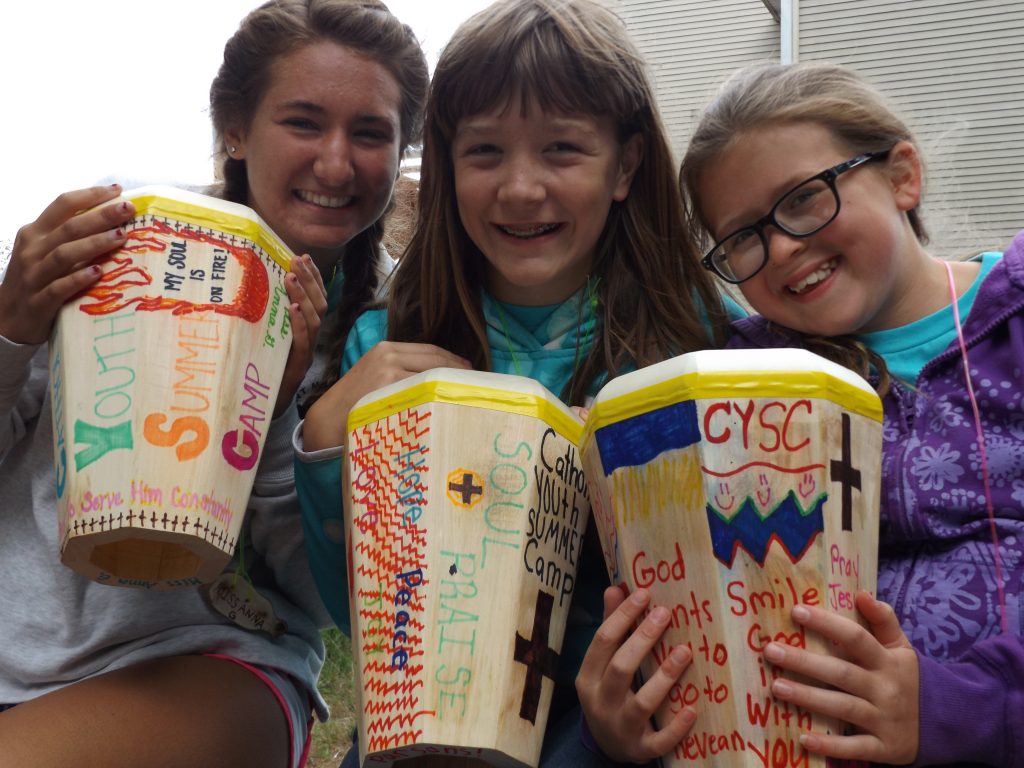 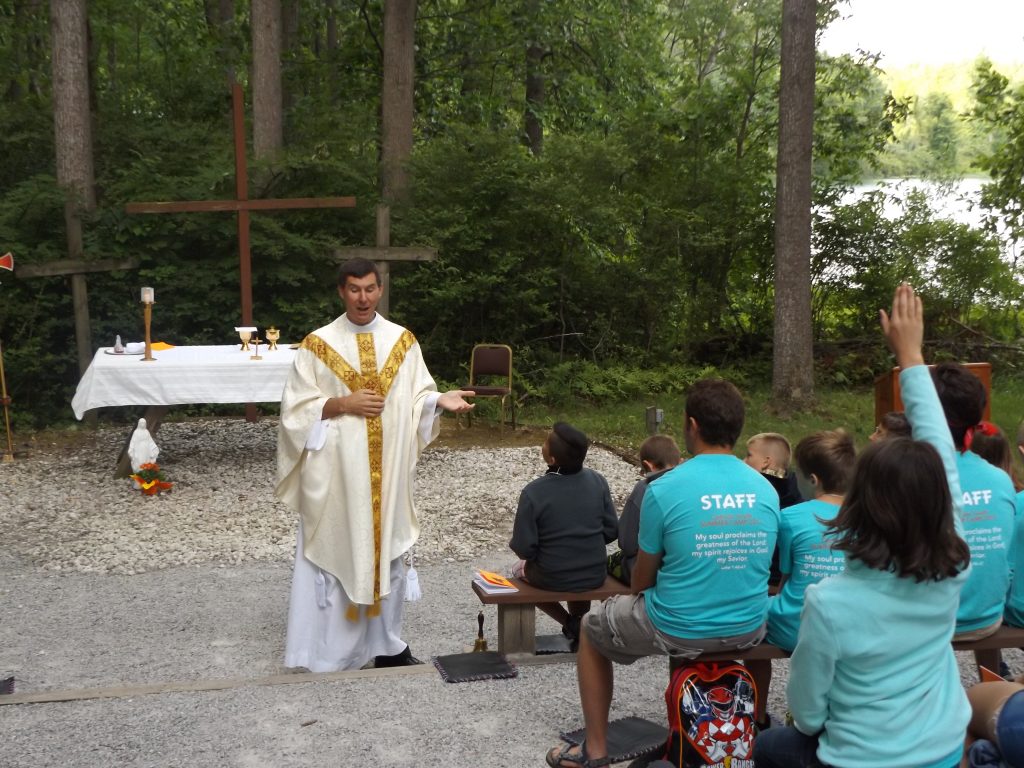 The camp has always been very Marian-focused, and this year the Tormas made the 100th anniversary of Fatima the center of the camp’s activities. Jan had the opportunity to go to Italy earlier in the year and brought back Fatima rosaries for the girl campers and olive wood rosaries for the boys.

Campers attended daily Mass, celebrated by different priests in the diocese, and learned about their faith. They also did crafts, canoed, kayaked, swam, hiked and enjoyed nightly campfires. The campers’ cabins were inspected daily not only for tidiness, but also for creativity. One year a cabin of boys arranged their backpacks in the shape of a cross; this year one of the winning cabins had cards at each boy’s bunk with the boy’s name and stating that his soul praised God. Jan said they look for types of creativity that ties into the identity and theme of the camp.

One day during the week, Father Daniel Scheidt of St. Vincent de Paul Parish, Fort Wayne, celebrated Mass with the campers in the open air. During the homily, he told the campers that Jesus spent so much time preaching outdoors because he wanted to make sure that the bounty and beauty of a nature was appreciated.

Sometimes we spend so much time indoors we can feel trapped,” Father Scheidt said. “When you see the clouds, when you’re surrounded by trees, it shows the whole world is ours and God is ours. Ask Jesus to help make us grateful for everything we have.”

In the Gospel Jesus spent much of his time outdoors with his friends, he noted during the prayer intentions of the Mass. “What’s beautiful about the camp is that it allows the kids to meet the Lord in his first natural habitat.”

Jacob Moon, Holy Cross Parish, South Bend, was at the camp as a junior counselor. The Saint Joseph High School student had attended as a participant the very first two years the camp existed, and he testified at a campfire about how it changed his faith life.

“Before I came to camp, I saw my faith as an hour every Sunday; it almost became like a chore. But when I came to camp I saw people rejoicing in their faith, getting up and singing and dancing at the campfire,” Moon said. “It showed me your faith life can be fun and can be integrated into every part of your life.”

Moon said that if not for attending camp those years, he might be where he sees some others around him: like “zombies, walking through their faith.”

Maria Tee is a seasoned counselor, returning to the camp for the third time. Her motivation in returning is that she gets the chance “to see the light of Christ burn brighter inside the campers, even if it’s just for one week, even if it’s just one child. Jesus went to find one lost sheep.”

She said that not all the kids come from the same background: some may have the habit of praying the rosary while others don’t, for example. As a counselor, bringing them all together and meeting each child where they are is the challenge.

“You learn more than you teach,” Tee said. “It’s totally worth whatever you give up to be here for a week, in order to see the kids grow.”

One of this year’s sixth-grade campers was Angela Philpot of St. Augustine Parish, South Bend. This was her third and last year.

“The first year I was very, very nervous at first, the second year was really emotional, because there were a lot of sad stories. This year is the best year,” Angela said. “I love learning Scripture, but I also love being able to praise God with song.”

Angela said she’s been in a cabin with almost all the same girls for two years now. The camping friends are from all over the diocese.

She feels she’s developed a better relationship with God at the camp. “Sometimes it’s hard to pray in the world with all the distractions. Here, you can pray without those distractions. And it also helps to be around people who share the same beliefs that you do, instead of being teased.”

Sometimes other friends misunderstand the faith, she said. For example, some of them don’t understand why there is a holy water font at her house. That’s why she enjoys attending and having fun at the Catholic summer camp. “Don’t be nervous,” she offered as advice to other fourth-sixth graders. “Even though you might be leaving your family for a week you’re going from one family to another. You’ll love camp. You should come. I’m really sad to be leaving.”