After living the military lifestyle as an artillery officer in the U.S. Army, Steve Bush and his wife Doree settled their family of five in Fort Wayne close to 30 years ago, planning to enjoy the remainder of their lives in peace, not knowing that God had big plans for them. He was about to pull them out of their lukewarm faith and into His glorious light in a dramatic way.

God began working in their lives several years ago, beginning with Doree. Like St. Augustine, her heart was spiritually restless – had been for years, in retrospect. She was raised Methodist; Steve fell away from his Catholic faith somewhere during his time at the United States Military Academy, colloquially known as West Point. They had agreed to baptize their children in the Protestant faith, but only attended church sporadically. 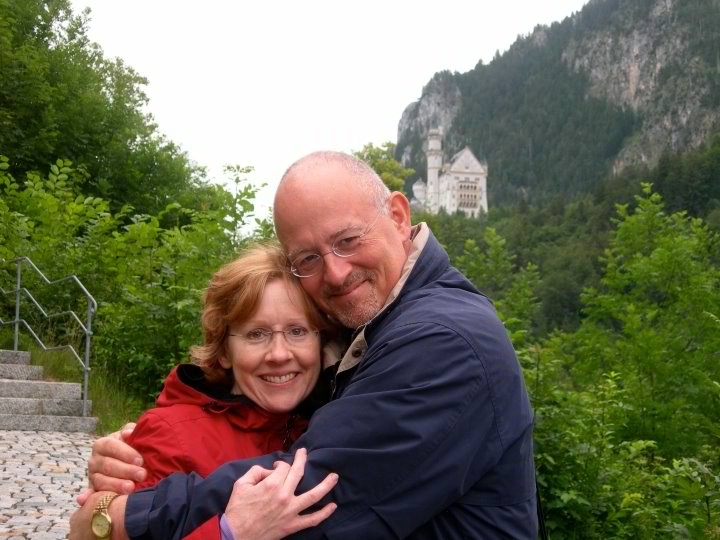 Photo provided by Doree Bush
Doree and Steve Bush are seen in Bavaria, Germany during a trip that included a visit to Rome. The couple came into full communion with the Catholic Church several years ago at St. Elizabeth Ann Seton Parish in Fort Wayne and have since become involved in parish life.

A part of her had always questioned which church was the true Church, and she remembered asking her Protestant friends about their faith differences as a young girl in New York. “There’s such differences … it didn’t bother anybody, which bothered me more,” she said. “So I said to myself, ‘someday I’m going to figure this out.’” Yet life interfered and years slipped by before she could fulfill that promise.

Then her mother passed away, and Doree found herself bereft, adrift, and suddenly she knew that she needed to draw closer to God, to find those answers that had long eluded her. This meant going back to church, but she didn’t know which one.

Eventually, all roads led to Rome for Steve and Doree – literally. Invited to a wedding in Germany, Steve suggested that they visit Italy during the same trip. “To see the early Church and where St. Peter and all these saints were, that was life-changing, incredible,” Doree said. Returning to Fort Wayne, they began church-hopping, searching for a spiritual home.

Around the same time, their youngest daughter Jessica came home from Ball State University on a break and unexpectedly announced her desire to become Catholic. Doree questioned her daughter about the seemingly hasty decision, but Jessica’s confident, no-nonsense responses wrought a change in Doree. “I remember as she talked it was like a veil just lifted up. … One by one my objections just kind of melted away.”

Visiting a Catholic church seemed like the last option in Steve’s and Doree’s search for a faith community. Every other church they tried, however, focused more on the “stage show” or the choir than the bride of Christ. “I was starting to get really upset about it because why couldn’t I find what I was looking for?” Doree asked herself. She remembered crying at the last church they attended because it was so far from her heart’s desire. Steve’s suggestion: “Let’s try St. Elizabeth” felt like a desperate attempt to support his wife.

The signs kept coming. Doree stated that, in her sadness over her mother’s passing, she would “sit in the chair and I felt a dove on my right shoulder,” though there was none. The presence comforted her, and Jessica explained to her mother that a dove represents the Holy Spirit. Live doves began appearing in the Bushes’ backyard. One sat near the kitchen window constantly, watching Doree through the glass all day, never startling away. One day, seven doves showed up in the yard, and an entire flock on another occasion.

“And after she became Catholic, they were gone,” Steve reported.

Doree was so overwhelmed that she approached Carole Yaney, Director of Faith Formation at St. Elizabeth Ann Seton about the astonishing occurrences, “and she said ‘that’s grace.’” Doree didn’t know what grace meant, so a quick dictionary search revealed the definition: “help from God.”

Another instance of grace came in the form of a recurring dream. In it, Doree discovered a room in her house that she had never noticed before – a room filled with unimaginable treasures of gold and silver piled high onto a large table with beautiful, embroidered white linens. It came to her three times in her life. Looking back, she interprets the room as the Mass and the treasure to mean the Eucharistic feast. She said, “I believe God was showing me that this treasure of His Church was right here, all along, in my own heart, and all I needed to do was open the door and see it.”

While Doree joined RCIA, Steve remained skeptical, reluctant to throw both his time and money into a church. On three separate occasions, though, Steve found himself at home, dozing off. Pulled from a half-asleep state by a male voice from somewhere behind him – “Steve!” – he didn’t know what to think. No one was in the house except Doree, and she hadn’t called him. The voice was unfamiliar.

“I didn’t know the story of Samuel,” Steve said, but after the third incident, he understood the trinitarian significance of the number three. He determined, “I’m going to come back to the Church; God’s calling me back.” Since Doree was attending RCIA, he chose to go with her, and learned more about his faith than he had during his years of Catholic schooling.

Steve believes his call to return to the Church was little more than a piece of the puzzle – the impetus to allow his wife’s conversion and by extension, bring his son to the love of God. “Something is being put in motion here and I don’t understand it and I don’t know why but I just accept it.”

Since that Easter Vigil eight years ago, Steve and Doree have become involved in parish life at St. Elizabeth Ann Seton, giving of their time in a way that Steve had once dreaded but now treasures. At first, Doree wanted to join multiple ministries at the parish, but was advised to slow down to avoid the burnout that new Catholics sometimes experience, so they chose carefully how to contribute to parish life. Together they have taught religious education for young members of the parish and joined adult education programs.

Doree was also instrumental in bringing a Seven Sisters Apostolate to the parish, a ministry in which one woman gives one hour one day a week in prayer for one of the priests of the parish. Thirty-seven women are currently a part of the program and former pastor Father Dave Voors even asked her to start a branch at his new parish.

Unbeknownst to them, the happiness that filled Steve and Doree that Easter Vigil and in the ensuing years was about to multiply, as their son Dan came to receive an even more wondrous calling and extraordinary personal mission in the Church.

Dan Bush will be featured in the next issue of Today’s Catholic. 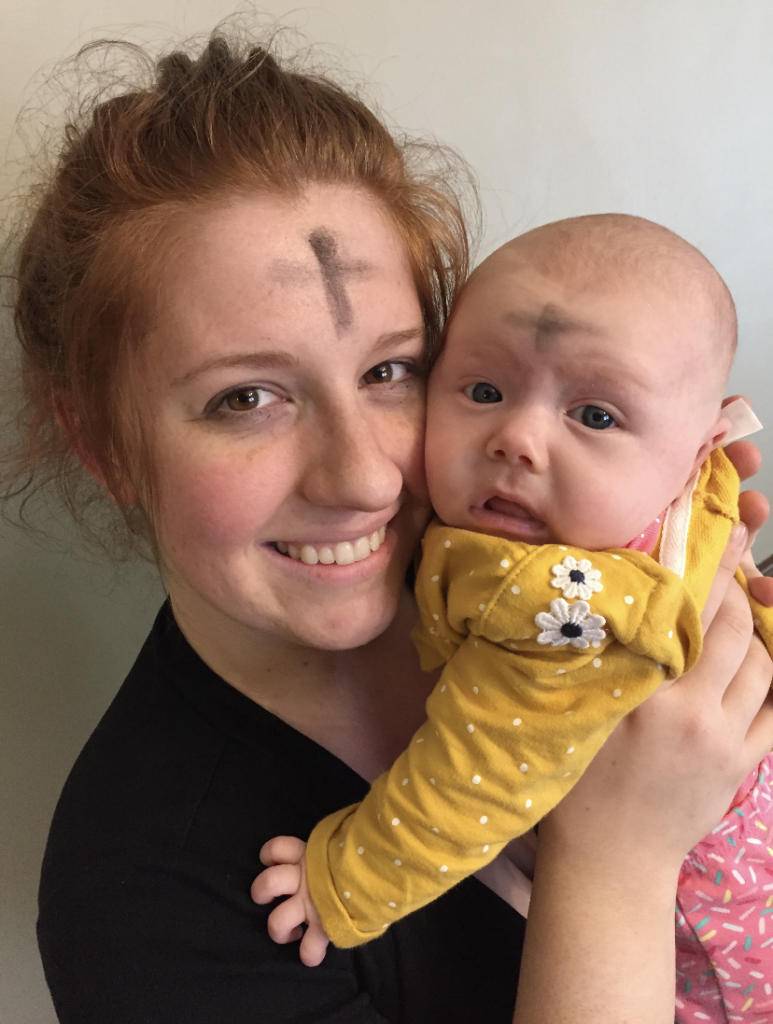 Jessica Roberts (née Bush) remembers growing up in a Christian household. Her search for faith began in college at Ball State University, around the same time as her mother’s, but with a humorous twist. Once she decided that she needed to discover a faith to make her own, she created a spreadsheet of all the Christian denominations she could explore in the Muncie area. Catholicism was not included in her list. However, her college boyfriend was Catholic and he brought her into music ministry at St. Francis of Assisi Parish on the Ball State University campus, her first personal encounter with the Catholic Church. “From there, it was all the Holy Spirit,” she commented.

Her Catholic sister-in-law in Arizona liked her parish priest so much that Jessica decided to email him with questions on the faith, and he responded. It became a back-and-forth encounter of email evangelization. Jessica stated, “He catechized me over email.”

Between those email conversations and the couple of books she read on Catholicism, she was sold. “I think at that point, God gave me grace of belief and the fire that goes with that.”

Now she serves as Music Director at Christ the King Parish in South Bend, a job which she began years ago on Holy Thursday. This will be her sixth Easter Triduum in that role. Additionally, she is involved in other ministries within the parish, including the St. Gianna’s Moms Group.

As a musician, she feels “a very deep connection with God through musical prayer.” She works with other members of the liturgical team and restarted the school choir after the pandemic. “I love working with kids.”

By living her faith joyfully, she certainly helped spur other members of her family to explore the Catholic faith. “When God wants something to happen, you can’t stop it,” she said. “God works through people, and I’m glad God worked through me.”