One of the many positive things that can be said of the Catholic schools in the Diocese of Fort Wayne-South Bend is this: They are generous and respond to the universal call to serve the poor. Though nearly every school sponsors an annual service day, sometimes themed, sometimes not — two new efforts, one on each end of the diocese, have unified the school staff and students in a remarkable way. 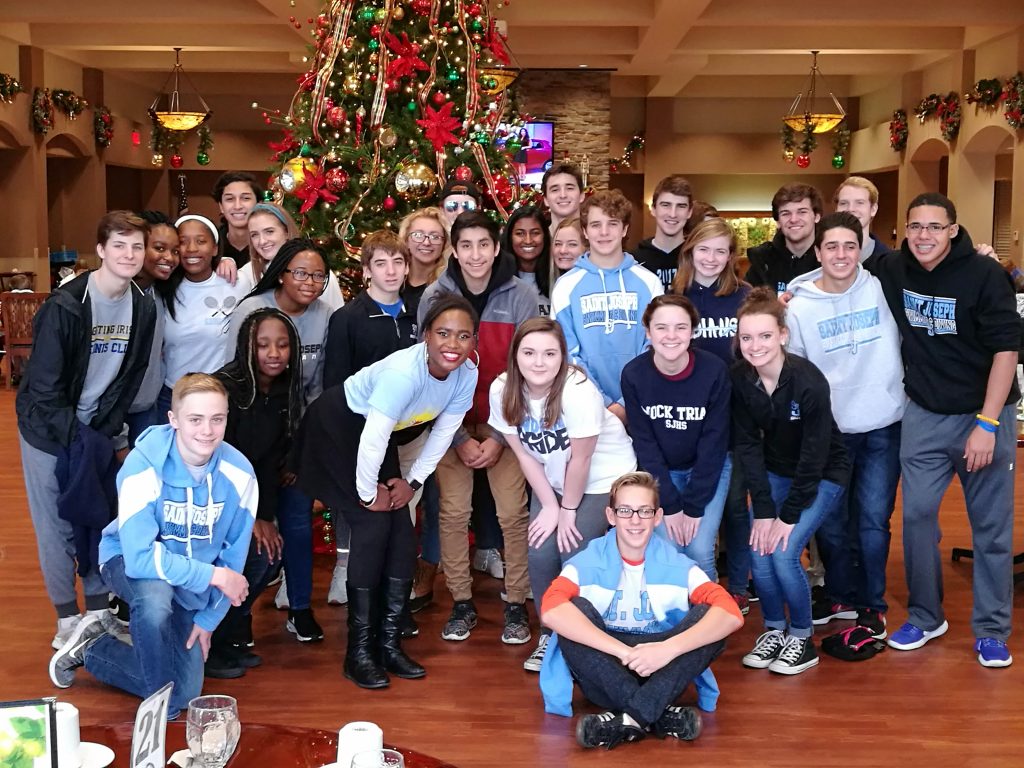 Provided by Aimée Matthews
A group of Saint Joseph High School students traveled to Healthwin in South Bend to visit residents and bring them holiday cheer on “The Joy of Saint Joe” day of service.

For nearly 20 years, the Saint Joseph High School community in South Bend has come together on a Sunday in November to celebrate Mass and then go out into the neighborhood to help the elderly, mainly by raking leaves. Once the work is complete, the volunteers gather to end the day with a meal and fellowship. Until last year, the service day was always optional; even so, nearly 600 students, teachers and parents would participate.

Kathy Kershner, SJHS Christian service coordinator, said, “This year, an entire school day was set aside and dedicated solely to the gift of service. We were seeking to more fully integrate the Gospel call to service in a deeper and more holistic understanding of Catholic education.” They call their new program “The Joy of Saint Joe.” 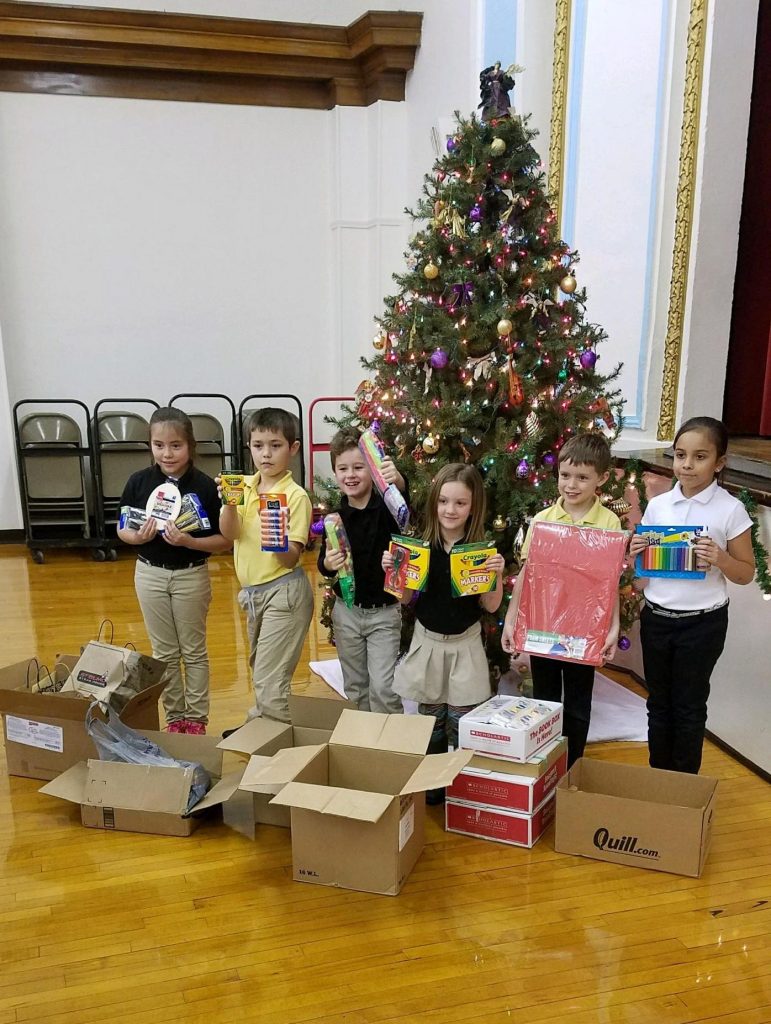 Provided by Derek Boone
Students at Huntington Catholic School proudly display an assortment of art supplies they collected for an impoverished school in Ukraine. They were able to donate 62 pounds of supplies.

At its core, the school mission is strongly based around four powerful words: “God calls; we answer.” One of their specific “animating values,” as Kershner explained, is “we serve with joy.” That jubilation spread in faithful, committed and dedicated service last Thanksgiving. Every student and all staff and faculty members, accompanied by parents of students, set out to serve in over 30 charitable agencies and upwards of 70 residents within the South Bend community — while simultaneously preparing and distributing over 300 Thanksgiving food baskets.

Kershner believes the results speak for themselves. “We considered this to be our joy — the joy of St. Joe, the joy of giving our lives, our time, our talents, and efforts for the well-being of our neighbors, our South Bend family.”

Kira Pratico, student body vice president, agreed. She called the day full of “genuine exaltation” and “fiery joy that was lit by the outpouring of love within and beyond the South Bend community.” 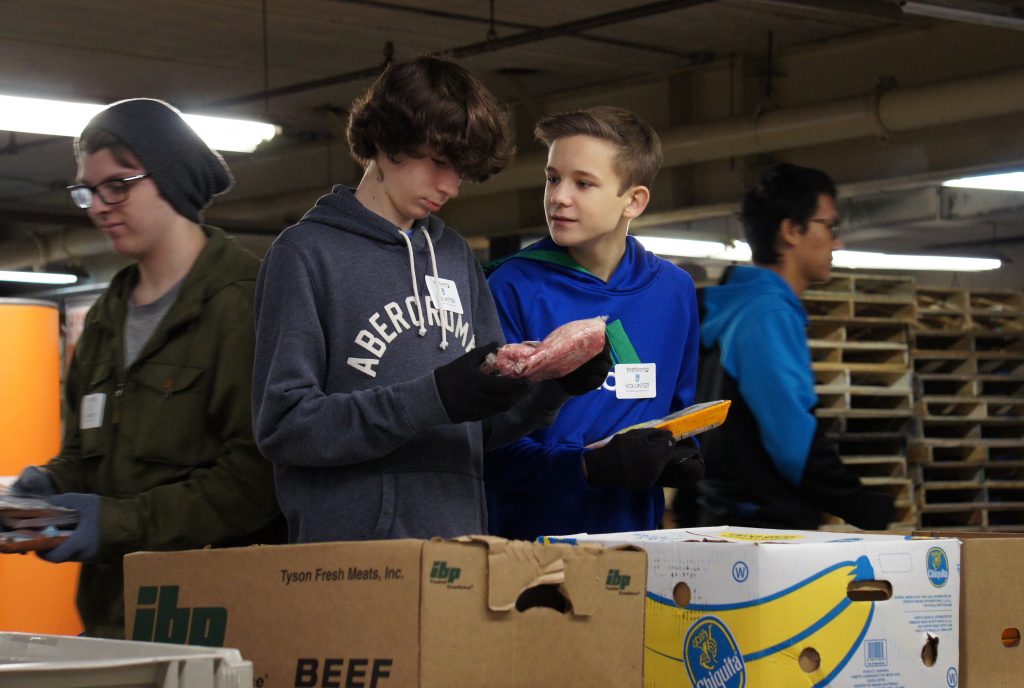 Provided by Lisa Kochanowski
Saint Joseph High School students visited the Food Bank of Northern Indiana on “The Joy of Saint Joe” day of service. Students performed various jobs for the organization, including sorting frozen meat to be used in food donation boxes.

Across the diocese, Huntington Catholic School caught the same Spirit-filled inspiration of unifying a service project into an entire day of giving. The idea struck principal Derek Boone during a conversation with art teacher Barb Martin in 2017.

“Her brother-in-law works for the Peace Corps at a school in Ukraine. He reached out to us, asking if we could donate a few art supplies for them, and I realized it would be a good idea for us to come together as a school and make this a larger project so that it would have a greater impact.”

The idea was set in motion. Boone requested a list of specific supplies the Ukranian school, Vynohradiv Educational Complex, needed, which was written down and evenly distributed among the classrooms. Classes were given deadlines by which to collect pencils, erasers, crayons, watercolors, glue sticks, scissors, ribbons, sequins and an array of creative media.

“I couldn’t believe how much we collected,” he said. “It was about 62 pounds of art supplies, which were mailed in two separate shipments to the school.”

Boone saw the momentum of excitement among students, teachers and school staff become infectious. He hopes they will continue a relationship with the Ukrainian school throughout the years.

For him, this was a gift far beyond mere school supplies. “We felt the values of our Catholic faith throughout this entire project,” he explained. “To impact a school that is low-income, in another country, reminds us that, as Catholics, we are always called to serve —  especially the poor.”

As a former physical education teacher, Boone knows how valuable “specials” are outside the core curriculum. “Not every kid is going to learn in a traditional classroom setting,” he said. “We gave these kids in Ukraine a creative outlet to construct and create, so that learning can appeal to every child. That’s what we’re called to do.”

He also believes art is a universal language that can bridge the gap between English and Ukranian.

Kershner and Boone agree that Catholic schools provide much more than academic knowledge; they feed the soul of every child and family who become part of their community. In turn, students are well-rounded people who receive a foundation of virtue that makes an indelible mark on their lives. They are proud of the ways in which their schools have responded to the call to serve the marginalized and impoverished among us, both near and far.

Saint Joseph High School principal Susan Richter summarized the Catholic schools’ call to serve: “In the words of Pope Francis, ‘The world tells us to seek success, power and money; God tells us to seek humility, service and love.’ I pray that our students understand and live this message of truth.”

Students, parents and faculty of the Diocese of Fort Wayne-South Bend Catholic schools act on their faith and respond quickly and regularly to natural disasters all over the country and the world. This school year alone, they have already contributed tens of thousands of dollars in financial support and goods for the victims of hurricanes Harvey, Irma and Maria, and the Mexican earthquake.

Bishop Luers initiated “Hope for Harvey” by collecting items to send to Western Academy in Houston. Students sent letters to the feeder schools asking if they would be interested in assisting. Parish Leasing donated a truck for them to fill and drive down. They had at least six feeder schools taking up collections.

St. Joseph did the NCEA Student to Student hurricane relief collections that was sent to principals in a weekly newsletter.

St. John the Baptist raised approximately $550 to send to the Student to Student hurricane relief through NCEA. They offered a spirit day for donations of at least a dollar and communicated the message to the community.

Sacred Heart School had an additional “Casual Day for a Cause” to add to the parish hurricane relief collection in the amount of $216.00. Also, prayers for the victims were added to the petitions at all the school Masses. Classroom discussions and prayers were offered, as well.

St. Joseph School took up a classroom collection of items that were shipped to a fire station in Houston.

St. Mary of the Assumption, Avilla

St. Mary of the Assumption had a dress-down/spirit wear day and raised $239.70 for Catholic schools impacted by Hurricanes Harvey and Irma (student to student). All the money collected went specifically for this purpose.

The parish took up collections for Hurricane Harvey in the Sunday Masses, but advertised to school families in an online newsletter as well. It also partnered with Hope for Harvey, a program initiated by Bishop Luers, and collected a specific items list organized by schools in Houston, which Bishop Luers drove down. It was a great effort, with one of their seniors writing to get us involved, with her campus minister on the email. Great leadership!

St. Charles students donated a total of $887.53 that was collected during its all-school Masses on a couple of Fridays. This was sent to Catholic Charities of the Archdiocese of Galveston-Houston for schools/school children most in need. A National Junior Honor Society student organized a collection of cleaning supplies, toiletries, infant care items and dental hygiene products that was taken down to Texas by Don Ray Drive-a-way.

Holy Family partnered with St. Christopher Catholic School in Houston. They collected and donated $1064.00 through a one-day bake sale and jeans day.

The new student council members discussed collection ideas for victims. They were thinking of First Friday Collections, both monetary and nonperishable food and toiletry items. They wanted to work with parish leadership groups as well with this endeavor.

They did an out-of-uniform day for Catholic charities in Houston, raising over $1600.

The school worked with Raptor Security, a company based in Houston, Texas. They were having a school supply drive for all the schools in the affected area. Christ the King sent a letter out and parents and staff brought in supplies for Texas. Tire Rack picked all the boxes up and shipped them to Raptor to give to the schools in Texas.

A student came forward and formed a committee. The school worked with Feed the Hungry and collected supplies (by class) – hygiene products, water, etc. They also had a dress down day (9/22) and asked students to give generously (students suggested if they met a goal of $5000.00, could they have an extra late start day)? They raised $5,510.00. They also passed a Community Can at a football game and collected change/donations during lunch for a week, and had a dress-down day for the earthquake victims in Mexico. The money is being sent to Catholic Charities.

Our Lady of Hungary

Our Lady of Hungary School in South Bend students made cards for two elementary schools with thoughts and prayers to the families in the Galveston-Houston area as requested by the Archdiocese of Galveston-Houston Catholic Schools Office. Students raised nearly $500 in donations by participating in a class by class penny war and bringing in donations. Many of the parents donated blankets to the cause. A faculty member has immediate family in the Houston area and the donations will be directly presented to this adopted family.

Marian donated approximately $1,038 directly to the Diocese of Galveston-Houston. This money was collected the week of the Marian-Saint Joseph football game by players and cheerleaders.

St. Jude collected several hundred dollars through a charity dress-down day and sent the funds to St. Catherine of Siena school in Port Arthur, Texas, accompanied by many prayers and well-wishes.

At Queen of Peace Catholic School in Mishawaka, they were ” Popping for Puerto Rico”. Students and staff brought in donations for Puerto Rico in exchange for a bag of popcorn at lunch. They combined their efforts with that of our parish collection for the Hurricane Relief.