VATICAN CITY (CNS) — In Caravaggio’s painting of Matthew, the sinful tax collector being called by Jesus to “Follow me,” Pope Francis sees the same unexpected, grace-filled moment found in his own call to the priesthood.

A 17-year-old Argentine student headed to a school picnic on Sept. 21, 1953, the feast of St. Matthew, Jorge Bergoglio felt compelled to first stop by his parish of San Jose de Flores.

It was there, speaking with a priest he had never seen before and receiving the sacrament of reconciliation, he was suddenly struck by “the loving presence of God,” who, like his episcopal motto describes, saw him through eyes of mercy and chose him, despite his human imperfections and flaws.

This gift from a “God of surprises,” a God who offers unexpected, unlimited and unmerited mercy, would change the young man’s life.

Four days before Pope Francis celebrates his 83rd birthday Dec. 17, he will celebrate 50 years as a priest — a ministry he sees as being a shepherd who walks with his flock and yearns to find those who are lost. 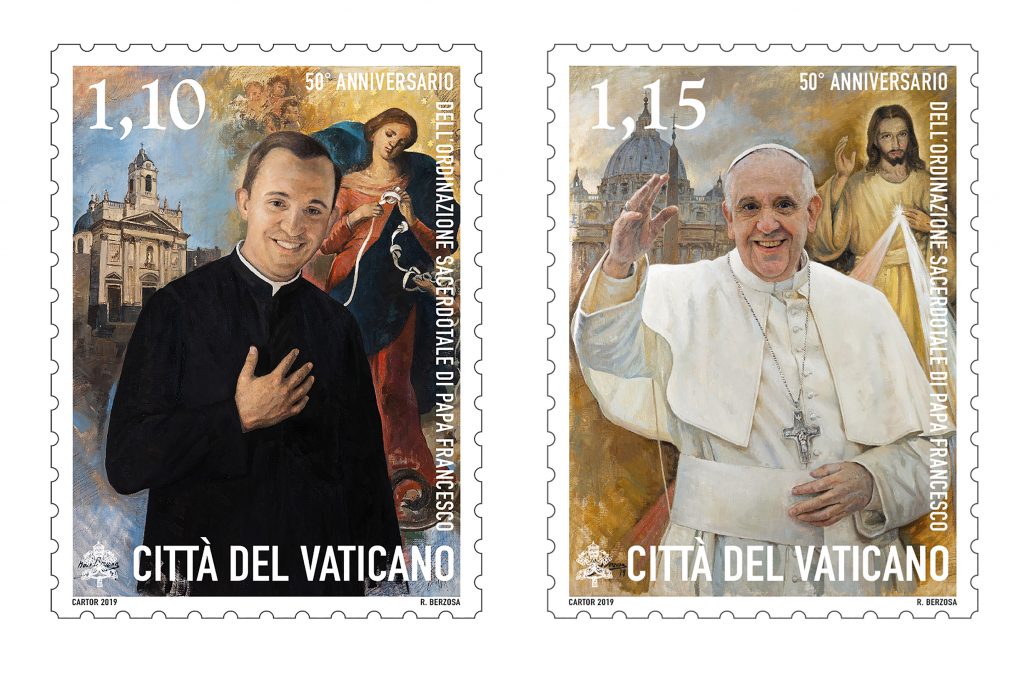 Even though he served as auxiliary bishop, then archbishop of Buenos Aires, Argentina, for more than 20 years, was elevated to the College of Cardinals in 2001 and elected pope in 2013, he has said, “What I love is being a priest,” which is why of all the titles he could have, “I prefer to be called ‘Father.’”

So much of what Pope Francis experienced in life and his vocation — with its many ups and downs — influenced what he says today about the priesthood, what it means and what it should be for the Church.

The main and overriding source of inspiration of who a priest must be is rooted in the figure of Jesus in the Gospels: What did he do? How did he react? What did he feel and say?

Jesus was always on the road and always attentive to the people he encountered, the pope told priests of the Diocese of Rome in 2014.

Like Jesus and the early apostles, the priest is a missionary, and this was part of the reason a 21-year-old Bergoglio chose to enter the Society of Jesus. “I was attracted to its position on, to put it in military terms, the front lines of the church, grounded in obedience and discipline. It was also due to its focus on missionary work,” he said in a 2010 book-length compilation of interviews with Sergio Rubin and Francesca Ambrogetti.

But there is a balance the priest must juggle that incorporates Jesus’ compassion and that strong discipline, qualities he needed to do well both at school and at work, beginning with part-time jobs at the age of 13. He swept floors in a factory, did administrative tasks, worked at a laboratory while specializing in applied chemistry in high school, and worked briefly as a bouncer.

The vocation of a priest, on the other hand, would be the exact opposite for Father Bergoglio; it would be drawing people close, not tossing them out, and not worrying about getting dirty in the process.

“Priests who are — allow me to say the word, ‘aseptic,’ those ‘from the laboratory,’ all clean and tidy — do not help the Church,” the pope told Rome’s priests in 2014.

“Today we can think of the Church as a ‘field hospital,’” he said, because “there are so many people who are wounded by material problems, by scandals, also in the Church. People wounded by the world’s illusions. We priests must be there, close to these people,” immediately treating those wounds with mercy before delving into the details.

In his many interviews, the pope has acknowledged his failings as a priest, Jesuit provincial, bishop and pope.

But within Christianity, there is “a theology of failure,” according to a 1974 book with the same title written by U.S. Jesuit Father John Navone. The book and its theology, which emphasized God’s patience, had an important impact on the future pope, who was going through a difficult, dark time after ending a six-year term in 1979 as a young provincial superior who struggled with stark divisions among his confreres.

“There was a blessed juncture between my theology and his crisis,” Father Navone has said. “It was a kind of light in the darkness to him.”

It is only by recognizing and admitting one’s failures, the pope has said, then seeing that God still awaits, still offers mercy and forgiveness like the father of the prodigal son, that a priest will be able to see familiar wounds in others and share, in turn, that same undeserved mercy.

It’s a form of “pastoral suffering” he told priests in Rome in 2014; “it means suffering for and with the person. And this is not easy! To suffer like a father and mother suffer for their children.”

At a time when the priesthood continues to suffer, most visibly with the scandal of abuse and negligence by its members, the pope has continually offered priests a hopeful understanding of their vocation.

Change, transformation and holiness are painful, but “the Lord is purifying His bride and is converting all of us to Him. He is making us experience the trial so that we may understand that without Him we are dust. He is saving us from hypocrisy, from the spirituality of appearances. He is blowing His Spirit to restore beauty to his bride,” he told Rome’s priests in 2019.

In a letter to priests in 2019, he said, “Our age, marked by old and new wounds, requires us to be builders of relationships and communion, open, trusting and awaiting in hope the newness that the kingdom of God wishes to bring about even today. For it is a kingdom of forgiven sinners called to bear witness to the Lord’s ever-present compassion. For His mercy endures forever.”