MERRILLVILLE (CNS) — The priest who was attacked by an unknown assailant in the sacristy of St. Michael Byzantine Catholic Parish in Merrillville Aug. 20 was admitted to the hospital two days later, where he continues to recover from the assault and resulting trauma.

Bishop Milan Lach of the Byzantine Ruthenian Eparchy of Parma in Ohio shared an update on Father Basil Hutsko in a letter read at all weekend services throughout the eparchy Aug. 25-26.

Bishop Lach read the letter personally to members of the northwest Indiana parish after the evening Divine Liturgy, Aug. 25.

Father Hutsko, 64, was assaulted as he prepared to celebrate morning Divine Liturgy. The assailant came up behind him, threw him to the ground and beat his head against the sacristy floor. The priest lost consciousness and never saw his assailant.

Father Hutsko told investigators his attacker said, “This is for all the kids,” which they believe was a reference to the recent revelations in Pennsylvania of clergy sex abuse in the Catholic Church.

The Merrillville Police Department classified the attack as a hate crime and referred the case to the FBI, which is conducting the investigation. No suspects had been arrested as of Aug. 27. 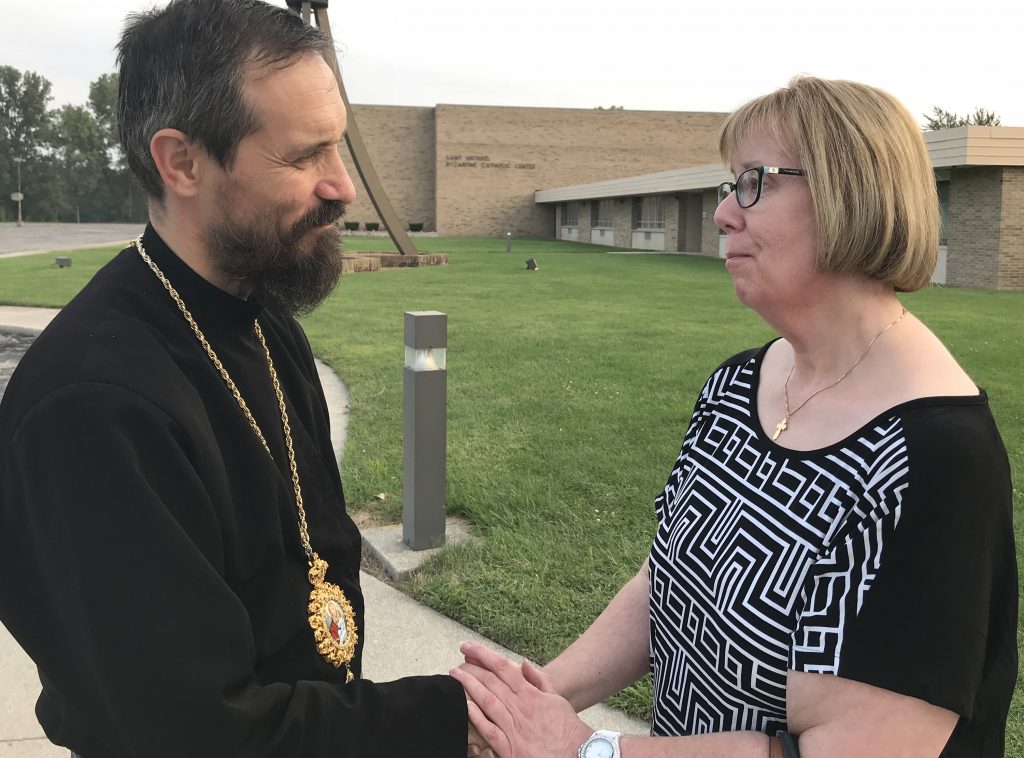 Bishop Lach’s letter described the sex abuse scandal as “devastating for all” in the church.

“Clergy conduct, including that of bishops, underlying the sex abuse scandal is inexcusable and, as a bishop of the Church, I do not condone the Church’s failure to properly address and respond to allegations of sexual abuse,” he said.

“Nevertheless, neither the underlying immoral behavior nor the Church’s inadequate response justifies the attack on Father Basil. The violence against Father Basil was reprehensible,” he said.

The bishop also addressed inaccuracies in some reports that followed the attack including questions about Father Hutsko’s history, “including whether he was ever accused of an abuse.”

“In 2004, a woman accused Father Basil of abusing her when she was a child,” the bishop’s letter said. “This abuse allegedly occurred between 1979 and 1983. The eparchy, assisted by a retired FBI agent, promptly investigated the allegations.”

He said the eparchy’s independent review board concluded “on the basis of that investigation, that the allegations were not substantiated due to insufficient evidence.”

“Father Basil, therefore, should not be deemed guilty of any allegations, and he remains a priest in good standing in the Eparchy of Parma,” the bishop said.

Bishop Lach, who came from Slovakia to serve in the eparchy in June 2017, said he only learned of the allegation after the attack.

“I am deeply troubled by any allegation of clergy abuse and take very seriously my duty to create an environment in which every person is treated with dignity and respect,” he said.

He asked the faithful to pray for Father Hutsko and said arrangements would be made for the pastoral care of the parish.

“No predictions can be made regarding the time needed for Father Basil’s recovery or for his return to active ministry,” he said, and updates would be provided when new information is available.

After liturgy, parishioners said they appreciated the bishop’s message of transparency and concern.

Michael Hlebasko told Horizons, the newspaper of the Eparchy of Parma, that the bishop’s initiative “to communicate and be transparent with all of us here in the parish is good.”

“I’ve been Byzantine all my life. I’ve known Father Basil since we were little kids. It’s tragic that someone would attack him in the manner that they attacked him for no reason whatsoever,” he said. “We’re a small parish here in this community and for something like this to happen, I was just shocked.”

Laura Ieraci is the editor of Horizons, the newspaper of the Byzantine Ruthenian Eparchy of Parma.